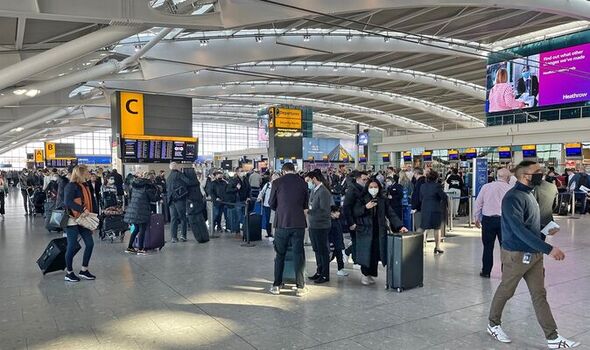 Thousands of travellers were left sitting on planes or waiting for hours to be reunited with their luggage last weekend when nearly 200 flights were disrupted by computer failures. It followed chaos in February when the airline cancelled or delayed 500 flights following its biggest tech shutdown in years.

Yesterday it emerged that BA’s chief executive Sean Doyle admitted in a message to staff that passengers and employees are “fed up” with the constant failures.

Earlier, angry BA passenger Alexander Bennett took to Twitter to accuse the airline of offering “outrageous and atrocious service”. He said: “Two hours after landing at the UK’s and BA’s premier terminal five at LHR and no bags anywhere to be seen for not just our flight but multiple flights!”

Entrepreneur Steve Regis said he was “stranded” after missing a connecting flight recently.

He claimed a representative for the airline said it was “not my problem, I’m going home, call this number” but then no one answered as offices had closed. Contacting BA on Twitter, Steve O’Brien yesterday said: “Yet again your IT is simply inadequate. You send links requesting documents with no possibility of uploading.

“You are causing check-in chaos even before baggage problems.”

The aviation sector has been one of the industries worst hit by the pandemic. The self-imposed reduction in service will do nothing to help the giant recover from a tough two years.

A BA spokesman said: “While the vast majority of our flights continue to operate as planned, as a precaution we’ve slightly reduced our schedule between now and the end of May as we ramp back up.We’ve apologised to customers who are affected and to limit the inconvenience have rebooked them on to earlier or later flights on the same day they were due to travel, where possible.

“We’re also offering them the opportunity to book on to an alternative flight or request a full refund.”

A report by the Airport Operators Association (AOA) released yesterday found UK airports suffered an even worse 2021 when compared to 2020.

The terminal, which contains the airline’s First and Club lounges, reopened on Sunday after being unused for nearly two years.

AOA chief executive Karen Dee said: “We have taken quite a big hit in the UK and it will be a very competitive process for bringing back those really important routes.”

Pictured: The stunning £70m superyacht shaped like a giant knife

AMResorts Gearing Up for a New Tomorrow