Cognac… with a dash of A-list style: Sampling the delights of the sleepy French town that’s back in the limelight – thanks to the enterprise of music megastar Jay-Z

There are gorgeously sleepy French towns and then there’s Cognac, seemingly caught in an aspic of 12th Century churches, grand 19th Century houses with faded shutters, and boulangeries with curly writing outside and buttery heaven inside.

Cognac – situated halfway between La Rochelle and Bordeaux – had its moment in the sun in the 16th Century, and it’s been enjoying a bit of a post-prandial nap ever since.

That was until American rapper Jay-Z, one of the world’s biggest music stars, developed a taste for Cognac’s very special brandy and decided to create his own blend. 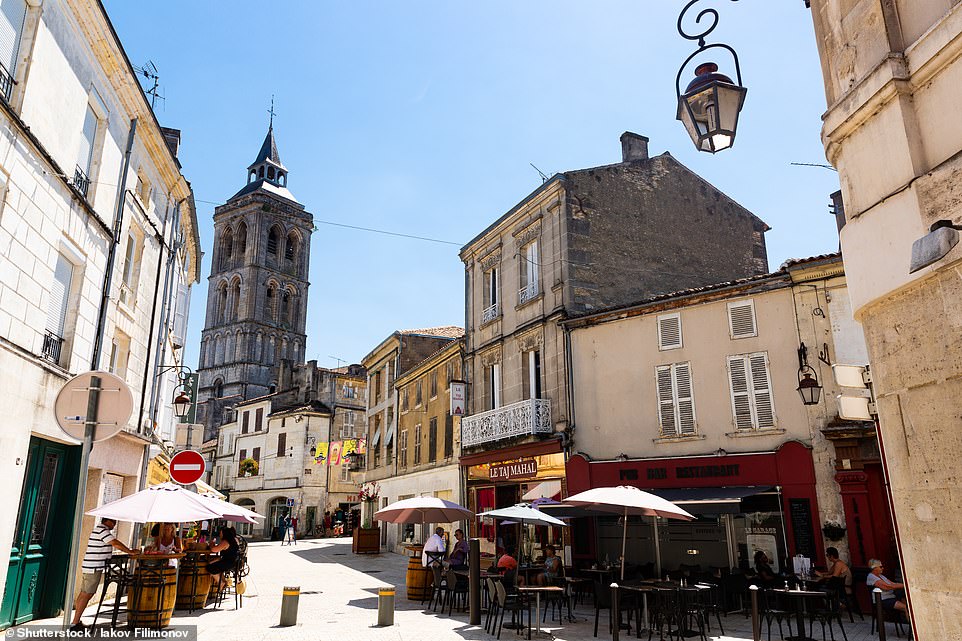 Drink it in: Cognac (the picture of it above shows its 12th Century Church Saint-Leger) is situated halfway between La Rochelle and Bordeaux

Brandy can be made anywhere but cognac can be made only in the Cognac region. And thanks to the skill of the distillers, it’s in a different league.

But creating a new cognac is not something you can dash off – it needs time and patience. Jay-Z nips over to France regularly to check on his D’Usse brand, staying at the equally finessed Hotel Chais Monnet & Spa.

On the banks of the River Charente just outside the town, this hotel, on the site of a former distillery, has an understandable love of cognac – its 1838 bar has 220 varieties on display. 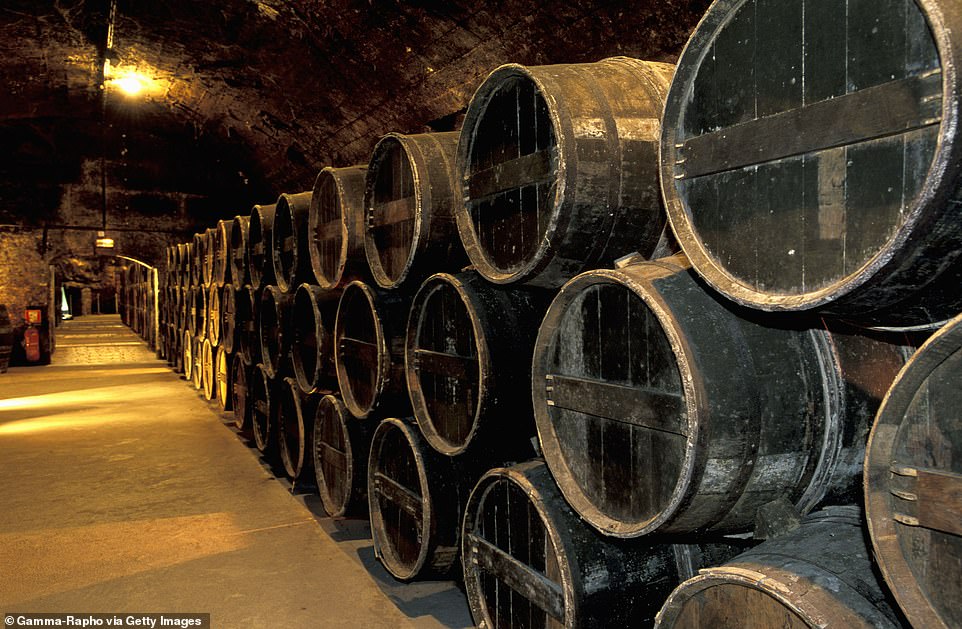 A key stop at any time of year is the Chateau Royal de Cognac (pictured) in the centre of town, says Sarah. It’s ‘the grandest factory in France… and makes Jay-Z’s blend’. Tours cost from £10. Pay £100 and you can taste multiple top cognacs 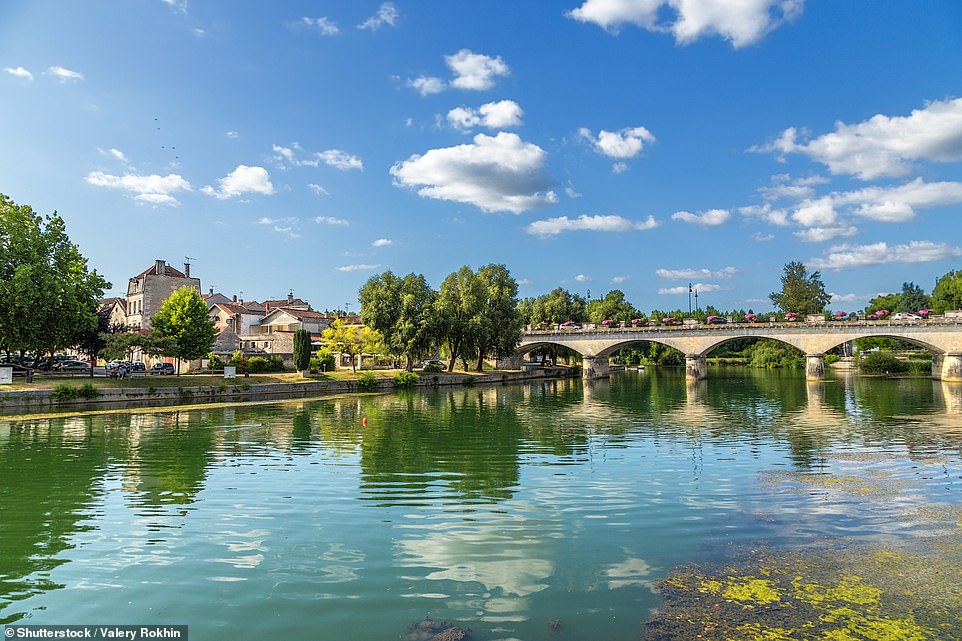 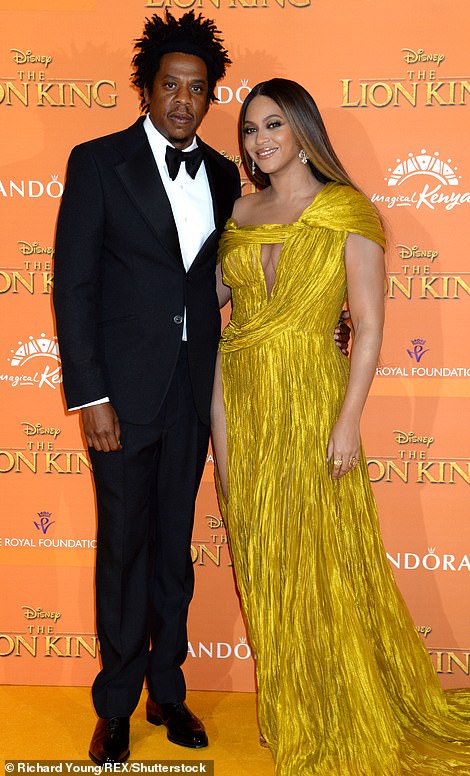 On my first night, a Hardy VS (which stands for Very Special, meaning it has been aged at least three years) is shaken up with saffron syrup and sparkling mineral water. And then there’s pineau, a delicious sherry-like drink which uses the same ugni grapes as cognac but is matured for less time and is served chilled. I acquire a taste for both, it’s safe to say.

Next year, for the first time, the Michelin guide to the world’s best restaurants will hold its award ceremony in Cognac instead of in Paris. Even by the high standards of France, this is a foodie area.

By day we stroll into town, past the creamy fin-de-siecle mansions and buy cheese, pâtés, beautiful vegetables and fruit from a covered market. At night, we eat oysters from the Charente river. Just inland, Le Baume de Bouteville creates spectacular balsamic vinegar, ageing it in cognac barrels. There are 400 cognac houses in the local area, from Hennessy and Remy Martin – both also endorsed by megastar US rappers – to smaller producers creating a few cases a year. In October and March, when the distillation process takes place, there are special tours and even more gastronomy.

A key stop at any time of year, however, is the Chateau Royal de Cognac in the centre of town.

When French king Francis I lived there in the early 16th Century, he probably didn’t imagine it would become a prison and then be abandoned. But in 1795, the far-sighted Baron Otard decided the vast and humid cellars of the near-derelict castle would be perfect for maturing cognac.

Today it’s the grandest factory in France, and also makes Jay-Z’s blend. Inside, the walls seem to be covered in soot, but this isn’t neglect, it’s baudoinia compniacensis – a fungus that’s an essential part of making cognac. Tours, which cost from £10, take you through the distillation process. Just like cognac itself, there are tours for every budget, including one at £100pp that includes tastings of every type of Otard cognac, which is now owned by Bacardi.

Cognac comes in a multitude of strengths – the older they are the smoother they become. VSOP (very special old pale) has been matured for four years; XO for at least six years. In the deepest part of the chateau is the Otard paradis, a dank, cobwebby cellar where the best vintages are kept in glass demijohns for the perfect level of maturation. 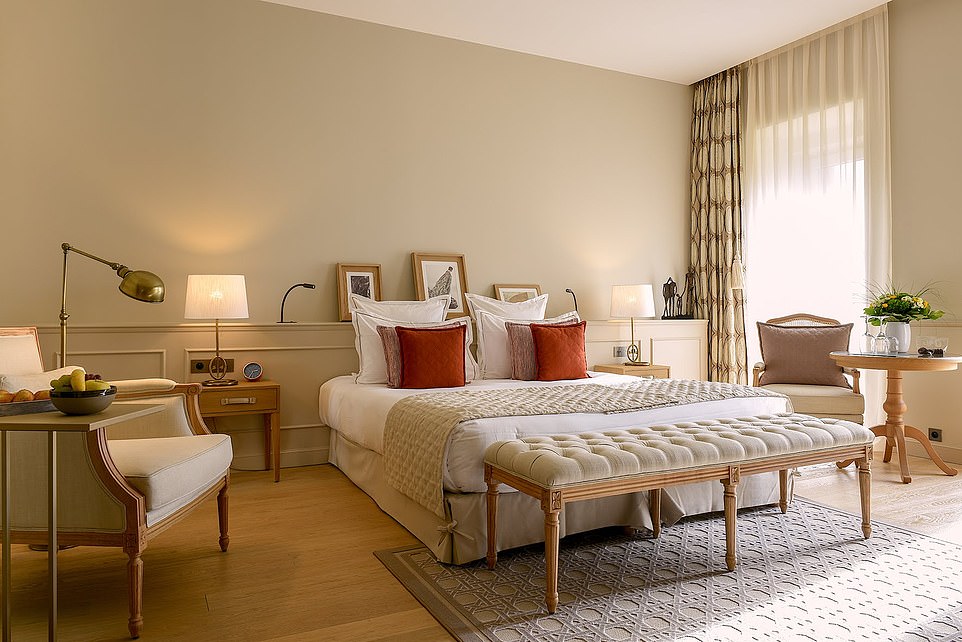 Sarah checked in to the Hotel Chais Monnet & Spa (pictured) – where Jay-Z also stays. Some of the rooms have separate quarters for bodyguards 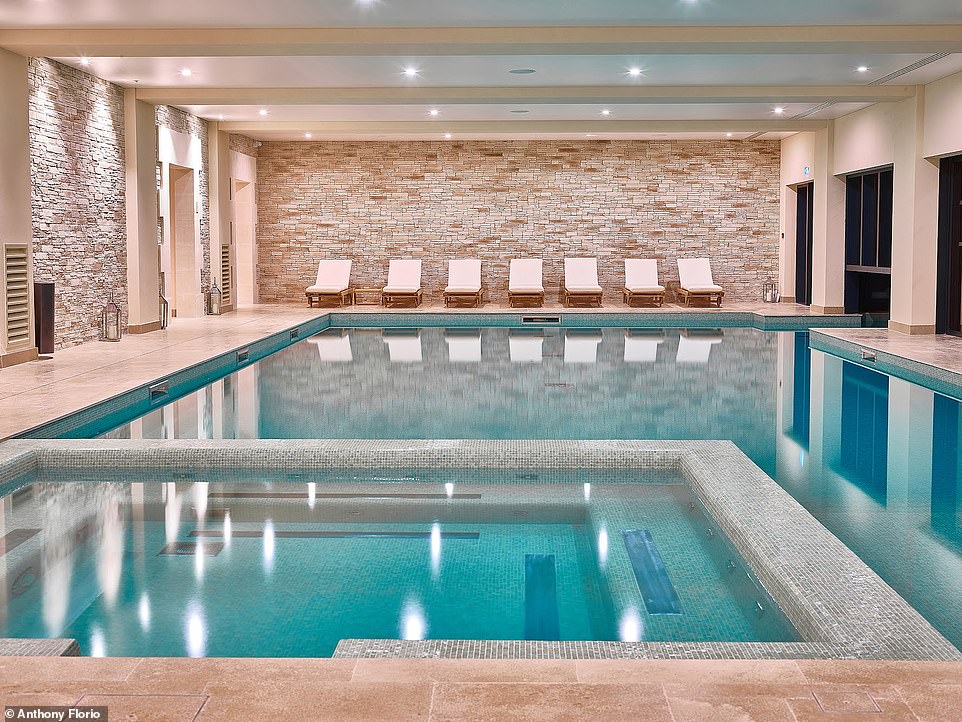 One of the pools at Hotel Chais Monnet & Spa – there are outdoor options for dips, too 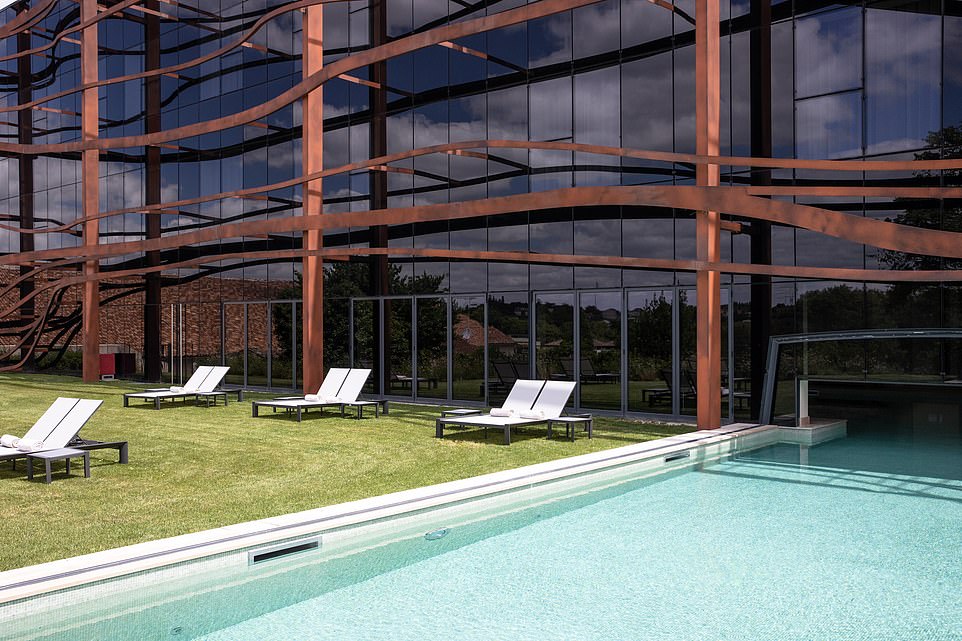 The spa, pictured, is in a glass building that’s wrapped with strands of metal designed to look like vines 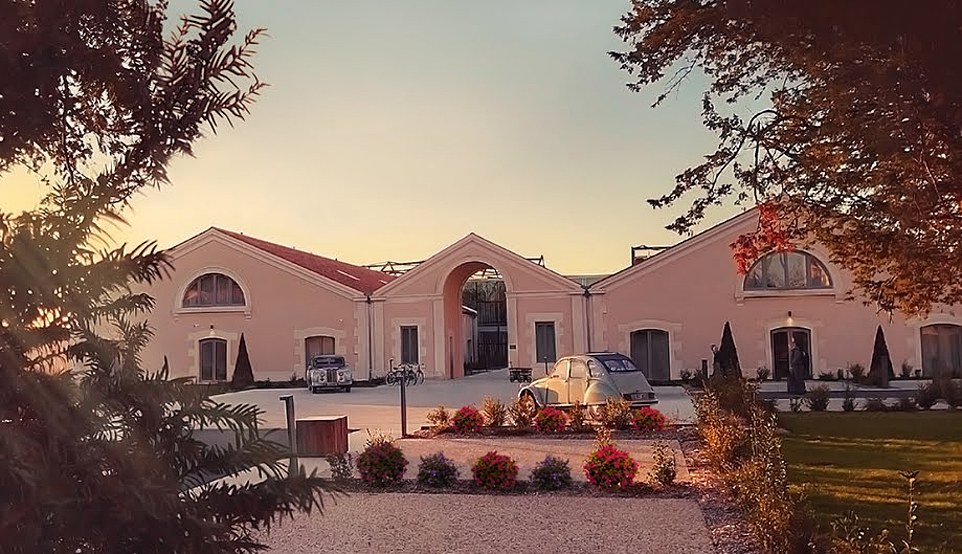 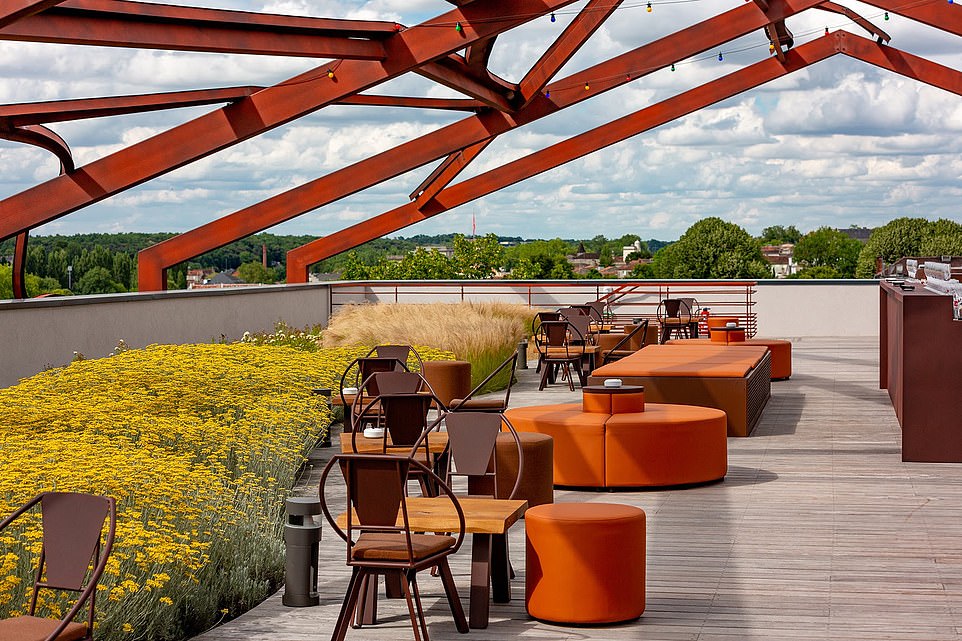 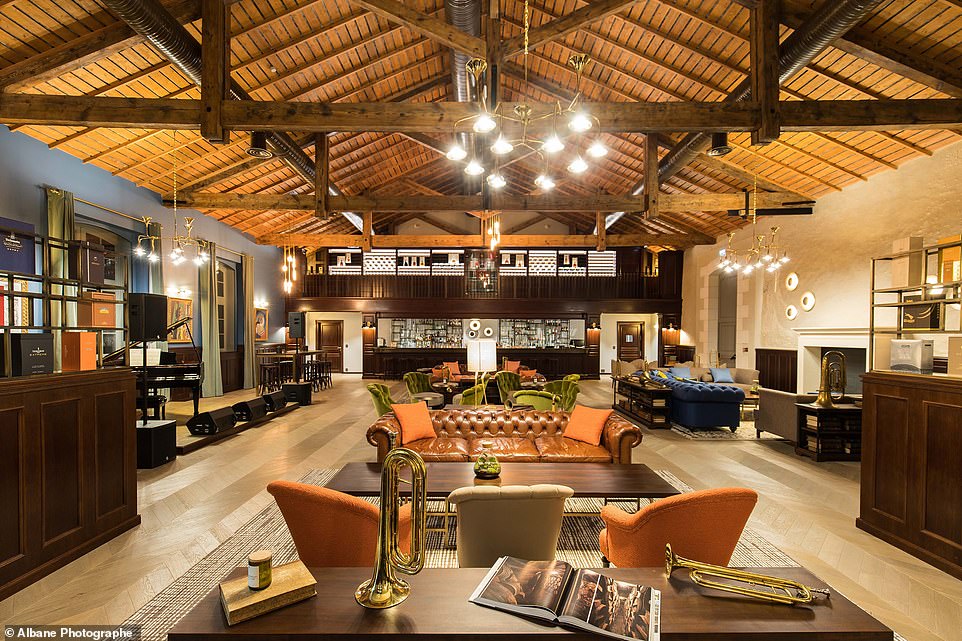 Sarah says of Hotel Chais Monnet & Spa: ‘[It] mixes ancient and modern with aplomb. Its grandeur comes out in gentle waves, softened by modern art and charm’

Back at the hotel, guests wanting to explore further can borrow one of the hotel’s Citroen 2CV cars and rattle around the countryside.

The hotel mixes ancient and modern with aplomb. Its grandeur comes out in gentle waves, softened by modern art and charm.

The 92 rooms are light, with a good number on the ground floor and with their own gardens. Some of the suites also have that essential facility for VIPs – separate quarters for bodyguards.

There’s also a spa in a glass building that’s wrapped with strands of metal designed to look like vines, featuring indoor and outdoor swimming pools.

Above all, there’s space. Social distancing is easy to do here.

There are three main restaurants at the hotel.

As you head towards the banks of the river at the hotel you come to Cafe Angelique, presided over by Yorkshireman David Harris. La Distillerie is an all-day brasserie filled with French families.

And then there’s Les Foudres in the cellar. Here, giant barrels greet you as you enter, and the food is fashioned into exquisite tasting menus.

And what better way to round off your meal than with a glass of cognac. 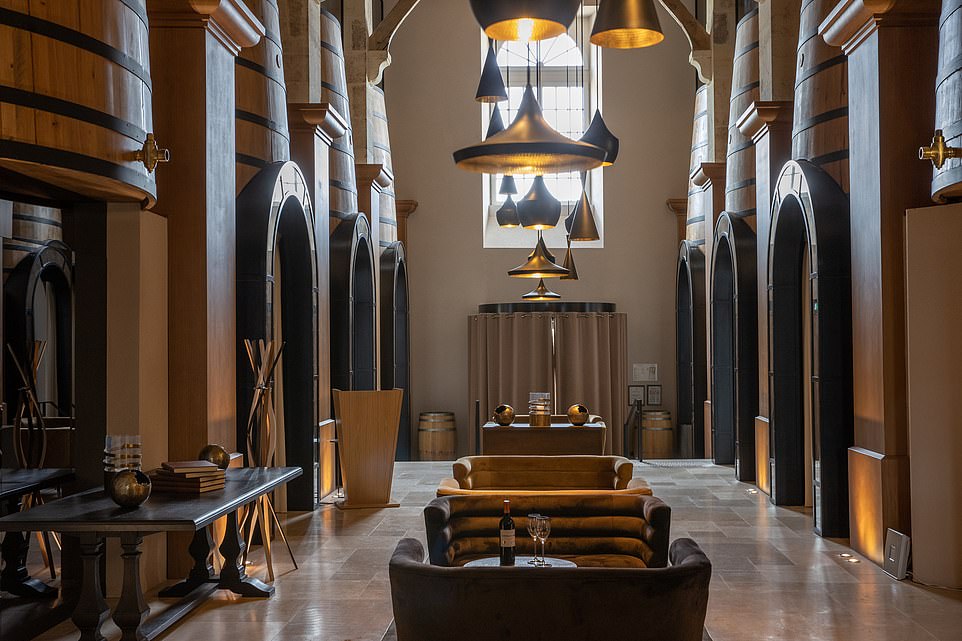 In Les Foudres restaurant giant barrels greet you as you enter, and the food is fashioned into exquisite tasting menus 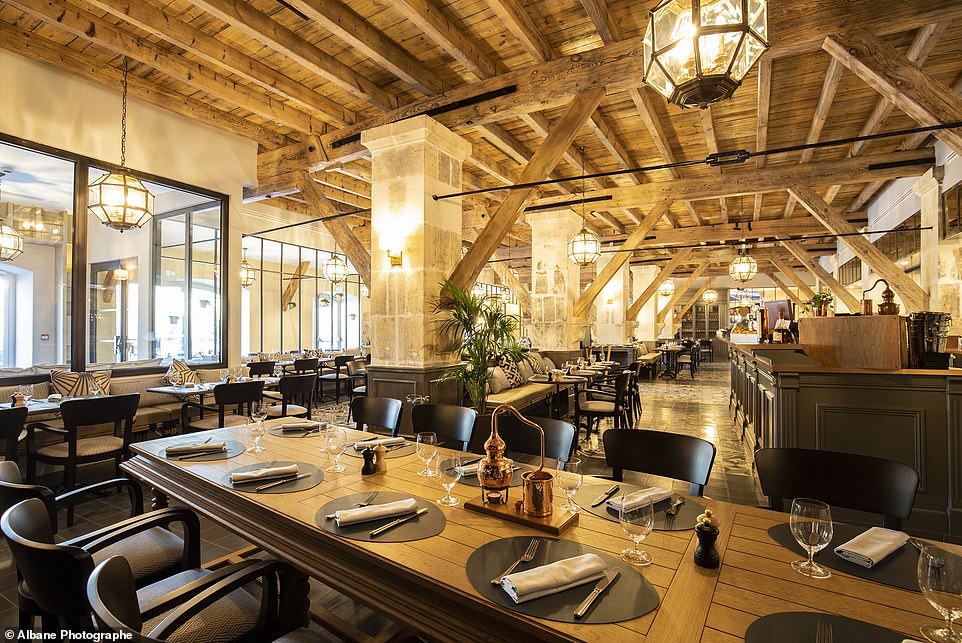 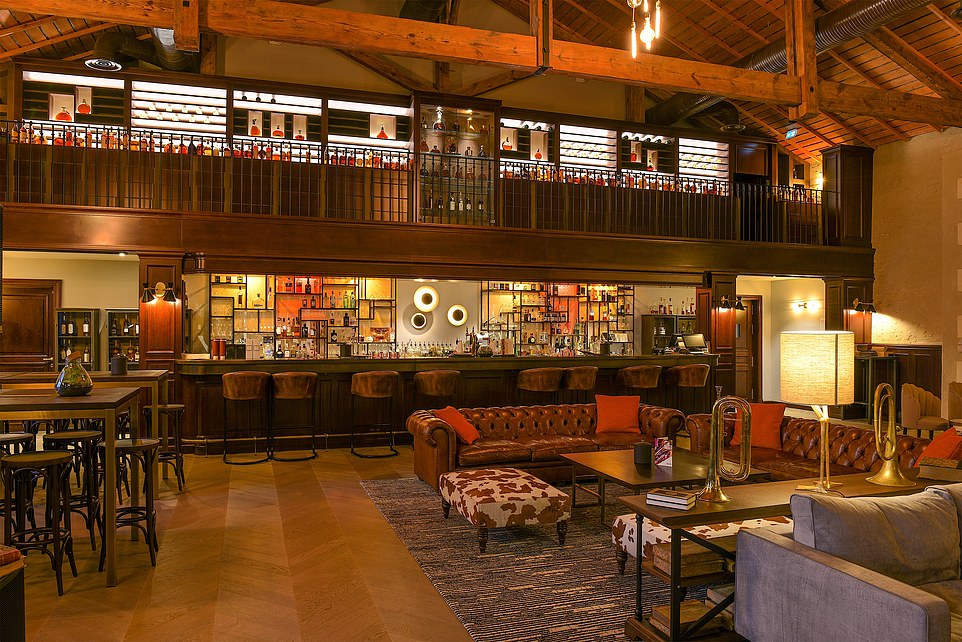 Hotel Chais Monnet & Spa, on the site of a former distillery, has an understandable love of cognac – its 1838 bar (pictured) has 220 varieties on display

6 Ways to Explore a New City This Fall