Home » Holiday guides » 10 of the best sleeper trains in Europe

The country that’s home to Greta Thunberg and that coined the term flygskam (flight shame) has plans to introduce new sleeper routes this year. New connections from Malmö will be welcomed but for many Swedes nothing can beat the 20-hour odyssey from their capital’s Central Station across the wilderness of the Arctic Circle and on to the Norwegian town of Narvik. This is one route to fight to keep the blinds up for. In summer, the midnight sun means seeing much more than normal on a sleeper and no wifi make this the perfect route to switch off and unwind.
• Berths from €83, sj.se

This route offers the unusual: a chance to be on a train that boards a ferry – to cross the Strait of Messina. It’s also a special experience to travel from Italy’s industrial, artistic northern cities to the tip of the beautiful rural south. Italian sleepers are not known for hotel-like touches so prepare for a rustic experience on this route. Ferry fun starts with the mid-morning arrival at Villa San Giovanni, in Calabria. Around 20 minutes later, on the other side, at Messina, enjoy the view trundling along the coast of Sicily to arrive in Palermo late in the afternoon.
• Berths from €60, trenitalia.com 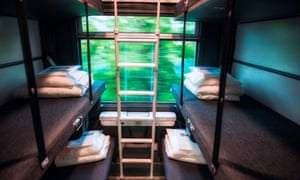 The French Thello night train goes from the City of Light across the Alps to Milan (for onward connections on Trenitalia for Rome) and then various stops to Venice. It offers an affordable alternative for journeys you may otherwise think to take by plane. Start a journey with a drink at the Gare de Lyon’s famous Le Train Bleu, share a picnic and stories with fellow passengers before turning in for a comfortable sleep – and then get ready to jump off in Milan as dawn breaks. There is a connection to be made here but arrival at Termini is still by 10am.
• Berths from €30, thello.com

Tell us about a museum or gallery near a main railway station in Europe to win two first-class Interrail Passes worth up to £768!

If unsure about all those days spent doing the Trans-Siberian, get just a taste on Europe’s longest sleeper train. Leaving Nice on a Sunday morning, travel via Berlin and an extensive stop at Brest in Belarus (for visa checks and to change to Russian gauge) to arrive in Moscow in time for lunch on Tuesday. Look forward to a hot shower (bring your own towels), a chance to savour Polish and Russian cuisine (due to a change in the restaurant car) and being looked after by your own provodnik or provodnitsa. Don’t forget visas for Belarus and Russia.
• Follow the Union Flag and then International Routes, berths from £250, rzd.ru, 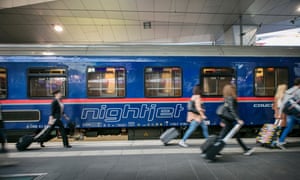 The most recent route to be added to the Nightjet service, this sleeper offers good links from the UK via the Eurostar to Vienna, which by the end of 2020 promises to be one of the best-connected European cities for rail travel. Travelling twice weekly, depart Brussels with a complimentary glass of sparkling wine, then enjoy a comfortable bed and arrive at 7.27am.
• Berths from €60, nightjet.com

Known as Trenhotel Lusitania, the “train hotel” is an efficient and eco-friendly way to travel between these two capitals. It departs at 9.45pm and arrives at Lisbon’s Gare do Oriente at 7.30am. There’s no restaurant car but the cafe-bar is a convivial place to meet fellow travellers and can serve up a hot dish and a glass of vinho verde, which may help with the bumpy night’s sleep ahead. Some of the carriages are in need of a little love and attention but it’s a fun and relatively affordable way to make this journey.
• Berths from €34, renfe.com or raileurope.com

Austrian Railways (ÖBB) has managed to deliver smooth, fast and comfortable Nightjet journeys since it launched its sleeper service in late 2016. The Nightjet network spreads across Austria, Germany, Switzerland and Italy, but this is one of the only routes offering double-decker rolling stock. Given that one of the best things to do on a train in Europe is to travel on the top deck, being able to sleep on it is the stuff of childhood dreams. The deluxe sleeper has a table, chairs and its own shower.
• Berths from €60, nightjet.com 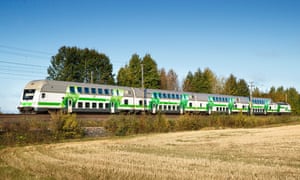 This sleeper is often referred to as the Santa Claus Express and ticks a lot of boxes for family trips. Children under 10 travel free, cars can be taken on the train (saving on rental costs when you arrive) and the train is a double-decker, which is usually exciting for kids. Run by the Finnish operator VR, the journey begins in the art-deco magnificence of Helsinki Central Station and over 12 hours whisks its way towards Rovaniemi in Finnish Lapland. The route runs all year and advance booking is essential.
• Berths from €48 , vr.fi

Budapest’s Keleti station, where this sleeper originates, leaves the utilitarian terminus crowd behind with its grand facade, high ceilings and sense of space and light. At the other end of this journey, spend the morning gazing at the Carpathian Mountains – as the early evening departure from Keleti doesn’t arrive in Bucharest’s Gara de Nord until lunchtime. The sleeper arrangements are pretty standard and note there may be no restaurant car until you reach Romania.
• Berths from £45, mavcsoport.hu (use Bucuresti for timetable search) 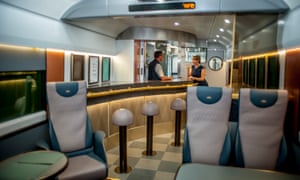 The UK currently has two regular sleeper services from London: the Night Riviera to Cornwall and the Caledonian Sleeper to Scotland. With both, travellers board at a busy urban station and wake trundling through natural beauty. Great Western Railway (GWR) operates the Night Riviera, which has recently been refurbished to feature charging points, hotel-quality duvets and hanging space, plus airline-style seats in the seated carriages. The best thing about this service is its access to the West Country without flying – or hours spent driving. Throughout the night it’s possible to disembark at 14 stops, from Taunton to Penzance, and from where sea connections go to the Isles of Scilly.
• Berths from £50, gwr.com