The Sicilian capital, called the “Kingdom of the sun” by invading Normans in the 12th century, has been a cultural melting pot since Phoenicians and Greeks fought over it in the 5th and 6th centuries BC. Sitting close to where Europe ends and Africa begins, Palermo bears the scars – and echoes the glories – of centuries of domination. Once Roman, Byzantine, Arab, Norman and ultimately Italian – unified with the mainland only in 1861 – it has a relatively recent “made in Italy” identity. And in 2018 it basked under the banner of Italian Capital of Culture, hosting the prestigious Manifesta contemporary art biennale and helping regenerate its waterfront. 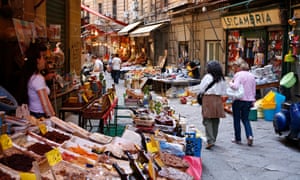 Palermo is proud of its Arabic origins, going back to the 8th century, and its three main markets, Capo, Vucciria and Ballarò, are reminiscent of Arab souks. The abundance and variety of food, and their theatrical vendors, give Palermo’s markets a distinct attitude. Touring them can be a bit daunting, so try a street food tour with Streaty. The price includes a passaporto del mangione (glutton’s passport), a certificate awarded to those who manage to eat their way to the end of the tour. Rick Stein apparently did it.
• Tours from €39, streaty.com 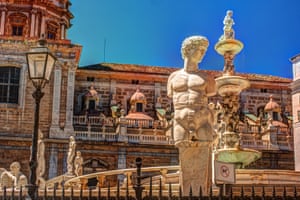 At the intersection of Via Maqueda and Corso Vittorio Emanuele is Piazza Vigliena, whose four baroque corners mark the centre of the historic quarter, locally known as Quattro Canti. Immediately south and east is grandiose Piazza Pretoria, also known as Piazza della Vergogna, the square of shame, for the thoroughly naked statues of nymphs, tritons and leaping river gods (senza veli, without veils) adorning the magnificent circular fountain in front of the Palazzo Pretorio (City Hall). In the streets around are stunning 12th-century churches, Arab-Norman Chiesa Santa Maria dell’ Ammiraglio, Chiesa Capitolare di San Cataldo with its distinct faded red domes, and the baroque 16th-century Chiesa di Santa Caterina.

Grab a granita and an outdoor table 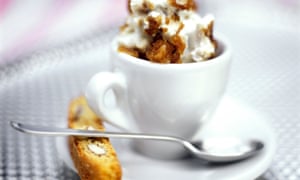 Start your visit to the city centre with a ritual stopover at a bar. My favourite is Antico Caffe’ Spinnato 1860, where I like to sit at an outdoor table for a granita al caffe con panna (shaved coffee ice with whipped cream) and watch Palermitani go by. The cannoli (tubes of cream-filled pastry) are also delicious.
• Via Principe di BelMonte 107-115, spinnato.it 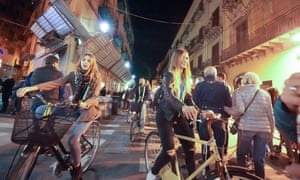 Narrow Via Maqueda, built in 1600, is an artery connecting the north of the city to the south. As a young girl, I remember it being a noisy, car-congested place, but it has recently been pedestrianised, and makes the perfect place for a passeggiata any time of day. Take the time to walk and get lost along the narrow side streets. You will be amazed how many hidden palaces and churches lie among the remains of dilapidated buildings left to decay since being bombed in the second world war. Occasional liberty style (Italian art nouveau) shops are still standing. Pasticceria Costa (Via Maqueda 174), dating to 1700, does delicious marzipan patisserie, and the walls are decorated with frescos by Ernesto Basile, the artist who painted the Teatro Massimo opera house (see below). 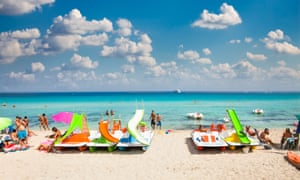 A 20-minute bus ride from Palermo (take the 806 from Piazza Politeama) is Mondello, a picturesque former fishing village dominated by 606-metre Monte Pellegrino, known for its chapel to Santa Rosalia, Palermo’s patron saint. Mondello’s Liberty villas are an echo of its heyday as a retreat for local aristocracy, who came to enjoy its sandy beach and crystalline waters. Dominating the seafront is the opulent, art nouveau Antico Stabilimento Balneare, with a piano bar for cocktails and an elegant terrace restaurant (three courses from €35). Of the many fish restaurants in town, Trattoria Marinara da Piero is my favourite – try the sauté di frutti di mare. If you just want a snack, the smell of panelle (chickpea fritters) from street stalls fills the air. And you have to have a gelato at the seaside. I know I’m home when I have a mighty broscia con gelato e panna (ice-cream in a sweet brioche with whipped cream) from Bar Antico Chiosco (Piazza Mondello 4). On a tree-lined street close to the sea, B&B Antonella is an excellent choice, with bikes and beach gear to borrow, and a lovely garden for breakfast (doubles from €90 B&B, on booking.com).

A day at the opera 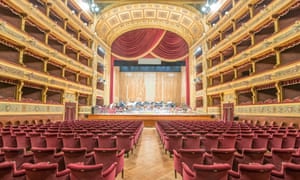 Under the volcano: a tour of Etna and north-east Sicily

At the top of Via Maqueda, you cannot miss Teatro Massimo Vittorio Emanuele, the third largest opera house in Europe, after Paris and Vienna. After the unification of Italy in 1861, Filippo and Ernesto Basile spent 20 years building this architectural masterpiece in classic style using local stone and marble. Its location was chosen to mark the point where the ancient quarters and the new expanding city meet, symbolising the historical link between the two. Grab a refreshing granita al limone from one of the moped sellers on Piazza Verdi, then take a guided tour of the theatre, with its ornate gold and red auditorium and seven tiers of boxes rising to a splendid ceiling painted by Rocco Lentini (about 30 minutes, adult €8, child €5). Even better is the Roof Terrace Tour, with breathtaking views over Palermo (€20).
• teatromassimo.it 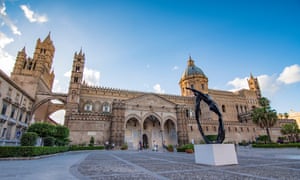 Off Quattro Canti lies Via Vittorio Emanuele with stalls and a street market and a vibrant atmosphere. If you’re hungry by now, it’s hard to resist the aroma of the traditional Palermitan deep-dish pizza, sfincione, from street vendor Salvatore. This will set you up for visiting the 12th-century cathedral, built at the height of the Norman domination, and Museo Riso, Sicily’s contemporary art gallery. If you have time, take in Angela Tripi’s terracotta workshop in the Castrone di Santa Ninfa courtyard. Her handmade terracotta cribs and nativity figures are exported all over the world. 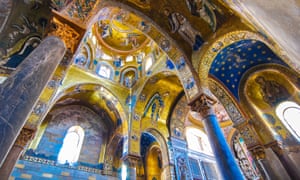 Turn left into the peaceful gardens of Villa Bonanno and on to Piazza Indipendenza and the 11-12th-century Palazzo dei Normanni – which, despite its name, was built by the Arabs well before the arrival of the Normans. Its Cappella Palatina is the highest artistic expression of Latin, Byzantine, and Arabic style, with gold, mosaics and marble covering every inch of its interior.
• Adult €10, federicosecondo.org 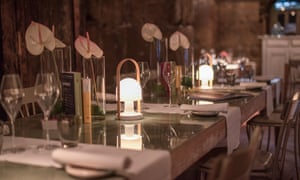 The Cala (marina) quarter of Palermo is seeing a slow food renaissance, pioneered by the Gagini Social Restaurant, in what was once the workshop of renowned 15th-century sculptor Antonio Gagini. Guests share large designer tables and embark on a slow food dining journey in a candlelit setting. It feels like the soul of renaissance art is still here. Gioacchino Gaglio is Gagini’s adventurous and talented chef. I love his linguine gambero: delicate shrimp pasta, parsley pesto and a garnish of traditional breadcrumbs.
• From €50 a head, gaginirestaurant.it 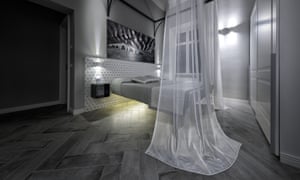 Close to the train station and metro is the recently opened B&B Suite Del Ponte Normanno. It takes its name from the historic Ponte dell’Ammiraglio in up and coming nearby La Kalsa, once the ancient Arab quarter. Walls in the elegant grey and white rooms are hung with photography by acclaimed local artists such as Pucci Scafidi and Francesco Ferla.
• Doubles from€90 B&B, pontenormannosuite.it

Getting there
EasyJet flies to Palermo from Luton and Liverpool, and Ryanair from Stansted and Manchester, both from about £45 return.

When to go
With summers that last from April to October and mild winters, Palermo is a year-round destination. Early spring and late summer are possibly the best for fewer visitors with warm, but not hot temperatures. Average temperatures are around 13C in February, 19C in May, 27C in August and 21C in October. The rainiest months are December (130mm), November (110mm) and October (90mm).

• This article was amended on 5 February 2019. Ryanair offers flights to Palermo from Stansted and Manchester, but not Gatwick.

The 10 best tourist destinations for travelers over 50

Jet Airways cancels all international flights for next three days