The Alhambra may be Spain’s most visited attraction year on year, but wandering the hills and the backstreets of Granada’s barrios will give you the real feel of this fascinating city, which has elegance and edginess in equal measure.

Granada’s fertile valley and sweeping hills have attracted many different civilisations through the centuries. Echoes of past occupiers, from the ancient Iberians to the Romans and Visigoths, can be found throughout the city and beyond. But, as befits a university town, there’s innovation amongst all the tradition – enter Granada’s street art and trendier food and coffee scene. 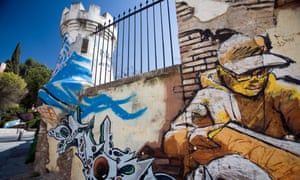 Beneath the south side of the Alhambra is the lively, old Jewish quarter of Barrio Realejo. Wandering its streets and leafy plazas will reveal layers of history, but not just through its Arab and romanesque buildings – a newer addition is its street art. The colourful murals by El Niño de las Pinturas continue the overlap of old and new, gracing crumbling brickwork with images of youth and, in his portrait of the Clash’s Joe Strummer, rebellion. There’s also a nod to a Moorish past, in the use of classically Arabic golds and turquoise-blues, patterns and motifs; lines of Spanish poetry also feature in a swirling, arabesque hand. Stick around until evening and head to the bustling Calle San-Matías/Calle Varela area where local favourite tapas joint Rosario Varela, with its charming retro interior, is one not to miss. Have a beer, glass of wine (both from around €2.50) or cocktail (€4.50-10) accompanied by incredible tapas, including mini burgers and pork buns. Should you need more food (and I rarely do), the menu – a twist on classic Andalucían food – is extensive and delicious. 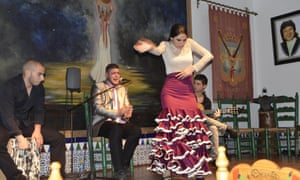 For authentic flamenco, skip any venue giving out tourist leaflets, even those in the famous Sacromonte Caves. The Peña la Platería , which is eastwards down the hill toward Albaicín Bajo, showcases the flamenco that dancers go to see; public performances are on Thursday evenings only, from 10pm. It’s €10 for a ticket plus drink on arrival, and it’s a good idea to phone ahead and book; and arrive early to secure a good spot. Better still, don’t just watch; try lessons with Albaicín-born Chúa Alba. Having performed and taught flamenco all over the world, Chúa now holds classes in her studio on Calle Elvira (just behind Gran Via). And fret not: whatever your level of Spanish or dancing, this is truly immersive and you’ll find yourself picking up the steps in no time.
• escuelaflamencachuaalba.com, €10 for drop-ins 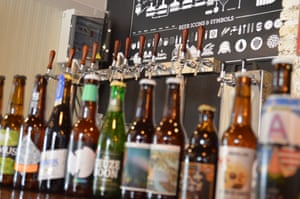 El Fermentador brings fresh development to the bare-bones Plaza de Toros/San Lázaro area. Owner Luis quit a career in finance to pursue his passion for craft beer and bring something different to his beloved barrio. The eight taps serve an ever-changing variety of trendy beers priced around €2.60, plus their own easy-drinking brew. Glasses of wine cost from €2. Tapas are a welcome fusion of local dishes like carne y salsa (meat in sauce) and croquetas (breaded, deep-fried balls of bechamel sauce) alongside my favourite: brie deep-fried with a forest-fruit reduction. If you make it past the tapas, don’t miss the house special IPA burger made with Irish Angus beef with chunky hand-cut chips (€12) and, if you’ve still got space, the homemade cheesecake. 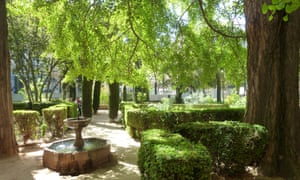 For a quieter experience in the same area, the leafy, 19th-century Jardín Botánico forms a shady, city-centre oasis just next to Plaza de la Universidad. The jardíngarden also (it forms part of the university). Among the plants grown here are wild species native to the Sierra Nevada, various herbs and 70 different large tree specimens. Head up the stone steps, through a deceptively understated doorway, and you’ll find yourself in the university’s law building, still used for its original purpose. It’s a grand and wonderful maze of marble corridors and interior courtyards, all dating back to its foundation by Carlos V in the 1500s. If you’re lucky you might be able to peep into one of the traditional lecture halls, which retain their original wooden-pew seating and parquet flooring.
• botanica.ugr.es, open weekdays 8am-10pm 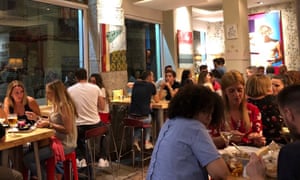 Given the number of tourists who flock to the cathedral, it’s surprising how few discover some of the best tapas bars nearby, all of which serve a new, complimentary tapa with each round of drinks. Start at nearby Calle de Almireceros and hit Bodegas Castañeda, a wonderland of dark, carved wood and hanging hams. Definitely try the vermut (Spain’s sweet, spicy fortified wine) that’s brewed in the giant barrels you’ll see behind the bar. With that, you’ll be served an array of traditional titbits, hopefully including some shaved ham. After that, head to bar St Germain on Calle Postigo Velutti. Choose from the excellent wine selection and gorge on cheese and bread, among a variety of classic tapas. But leave space for El Bar de Fede, five minutes away on Calle Marqués de Falces. A fresh twist on traditional food and decor, this place has great wines, cocktails and tapas to die for, including meat dishes and plenty of veggie-friendly pasta and rice ones too; I love the long mushroom strips served like tagliatelle.

Traditional cafe sólo or cafe con leche has been given a reboot in Granada. Minuit Pan & Coffee is one of the key innovators, and what began as a takeaway coffee shop and bakery in the Albaicín has expanded: there’s now a bigger, more central venue with full seating just off Plaza Nueva. Ismail and his co-owners’ aim was to bring to their city the barista coffee experience, “kept simple, done well”, and it’s been welcomed by a cross-section of Granadinos. Coffee beans are roasted in Seville and, at around €1.50 a coffee, it is a small price to pay for a great cup. While you’re there, either tuck into a delicious croissant, a tostada (toasted homemade bread with various toppings), or a slice of great carrot cake. Or just take home an artisanal loaf, all baked using traditional French methods.

View of the Alhambra 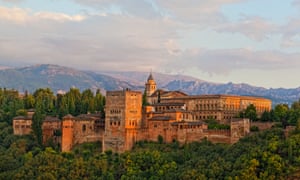 Trekking to see this mighty structure from above may not be for the faint-hearted, but you’ll be rewarded with spectacular views. Head to the Ermita de San Miguel church, atop the Sacromonte hill above the barrios of Sacromonte and the Albaicín – go up the steps from the Albaicín’s Calle Cruz de la Rauda or walk from the Carril de San Miguel. Take a bottle of wine early evening and watch the sun set across the hills below, the Alhambra opposite and, beyond that, the Sierra Nevada mountains. At weekends the tower ruins of La Silla del Moro (the seat of the Moors) present a different view again, from directly above the eastern side of the Alhambra. Trek from Camino Fuente del Avellano by the River Darro and you’ll see the palace and gardens open out below, as well as the city and plains and peaks to its west.
• Both viewpoints free; La Silla del Moro opening times at alhambra-patronato.es 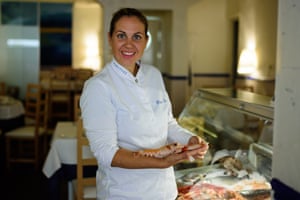 On a sunny day, head south-west from the centre and you’ll find Plaza de Gracia. Weekends and early evenings here are a snapshot of Granadino family life: adults enjoying tapas while kids play in the enclosed playground or in front of the church. The more casual Bar Manolo or Cerbeceria Igra serve classic tapas, like patatas bravas or patatas con huevos (potatoes with fried egg). The award-winning Puesto 43 celebrates the Andalucían love of seafood with the expertise of a family who began as Granada’s first fishmongers back in 1913, when the day’s catch was brought up by donkey from the port at Motril. Their commitment to sourcing the best, freshest seafood has not waned. The smart restaurant inside is known for its rich, indulgent seafood platters, most priced between €16-€20 a head, though grab a glass of wine for €3 and the free tapas or raciones (larger, menu-based portions), served outdoors on simple check-clothed tables, are arguably just as good; these are often plates piled with gambas fritas (prawns), bacalao (salt cod) or fish croquetas. 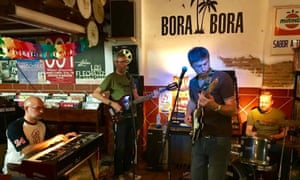 As its name might suggest, the Plaza de la Universidad is often humming with students. Just north-east of the hip second-hand stores on Calle Trinidad is Calle Escuelas, where you’ll find Bar de Eric. This is an institution on Granada’s rock music scene, as owner Eric Jiménez is the drummer with the city’s beloved Los Planetas. The bar’s photo-clad walls serve as a rock’n’roll hall of fame; Eric himself is stood smiling with Marky Ramone in one picture. Then head just around the corner to Discos Bora-Bora – no mere record shop, this is a music emporium: the place stocks vinyl, music-related books and clothing, and also hosts gigs and parties. Its cult following is understandable; even on “quieter” days locals love the upbeat atmosphere, and owners Mariajo and Gonzalo are happy to enthuse about music with pretty much anyone.

Fresh from the market

Head north up Gran Via de Colon in front of the cathedral, take a left down Calle Cristo de San Agustín and you’ll reach Granada’s main indoor market. But it’s not only a great place to buy the freshest produce; in this smart, polished space, many of the stalls have tables where you can sit and try plates of what’s on offer. At Carnicería Miguel Angel it’s worth sampling the meat products that this family butcher has been perfecting for 80 years: go for a plate of famous jamón ibérico, freshly sliced before you (150g for €12.90), or a meat bocadillo (€2.95-3.50), washed down with a beer (€2) or glass of wine (€2.50).


When to go
Granada is a year-round destination because of its sunshine: summers last from April to October; winters are cold but bright. Semana Santa (Easter Holy Week) is probably the biggest fiesta, though there are various saint-based festivals, with music and processions, throughout the year. August can get very hot and dry, so many locals leave for the coast and some establishments have limited opening hours at best.

Getting there
Málaga airport is served by many airlines from across the UK. Granada’s own smaller airport is 20-25 minutes by taxi (around €30) from the centre; easyJet flies direct from Gatwick and Manchester from about £50 return.

Spain lockdown: How long is Spain on lockdown?

Meet the CEO of tiny Channel Island Herm, which has just 70 residents