Hamburg has a great choice of stylish design hotels and hip hostels. The immense Gastwerk, in a 120-year-old red-brick former gasworks in Bahrenfeld, western Hamburg, falls between the two, with a laid-back, welcoming atmosphere, minimalist loft-style rooms and stark industrial decor of steel girders. The comfy leather sofas, cosy bar and Moroccan-inspired spa add warmth. Ten minutes’ drive from the centre, it is right by a bus stop and a few minutes’ walk from Bahrenfeld station. This innovative hotel group also offers other fashionable alternatives around town, such as Superbude in St Pauli and 25hours in HafenCity.
• Doubles from €103 room-only, Bei Alten Gaswerk 3, +49 40 890620, gastwerk.com 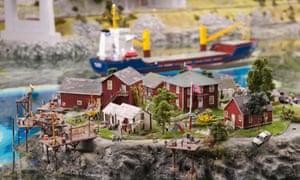 Housing the world’s largest model railway, this is Hamburg’s biggest eccentric surprise, and packed to bursting every day. The place seduces everyone, with kids staring open-mouthed at fire engines and steam trains whizzing past, teenagers snapping selfies against a backdrop of Las Vegas casinos or the Swiss Alps, while adults studiously examine Rome’s Colosseum or St Peter’s Basilica. The biggest crowds gather round a replica of Hamburg airport, where every few minutes a model Lufthansa plane glides along the runway, miraculously taking off. Don’t expect a quick visit – the exhibits are spread over several rooms with 10 miles of track and some 260,000 human figurines. Book online to avoid the lengthy queues, and afterwards explore the surrounding Speicherstadt, a maze of towering 19th-century warehouses and narrow canals that was once the heart of Hamburg’s port and is now a Unesco world heritage site.
• Adults €13, children €6.50, miniatur-wunderland.com 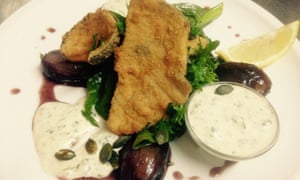 Backing on to the Reeperbahn, the gritty St Pauli neighbourhood is the heart and soul of Hamburg, with its seething football stadium and fanatical supporters, a mix of hard-drinking seamen’s watering-holes like Jolly Roger and Old Sailor, where a beer or shot of rum costs €2, cocktail bars and innovative bistros. Saskia Brachmann opened her friendly diner 10 years ago, a pioneer of a new generation moving into the quarter. The food is fabulous – Schwabian homecooking from south Germany. Hearty, well-priced servings of spätzle pasta smothered with anything from lentils to onion confit or deer ragout, plus vegetarian specials such as pumpkin and salsify gratin. From Thursday to Saturday, Ben Atkins, an English barman, opens the downstairs Whiskey Bar, where a DJ plays till the early hours.
• Mains from €12.50, Hein-Hoyer-Strasse 60, +49 40 673 05123, Mon-Sat 6.30-10.30pm, brachmanns-galeron 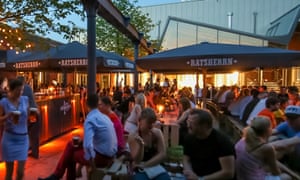 Hamburg, like many places, is in the grip of a craft beer revolution, and the first address to check out should be this sprawling brewhouse. Cosy in winter with a log fire, it has a loud and noisy beer garden in summer that adjoins the vast steel vats of the brewery. The in-house brewer, Ratsherrn, has half a dozen ales on tap, from pilsner and a hoppy pale ale to malty rotbier and seasonal brews. And the helpful beer sommeliers have assembled a menu of more than 60 craft beers from across the world. Bread comes straight from a wood-fired oven, while the comfort food menu ranges from a tasty bowl of goulash to organic hamburgers and veggie burgers.
• Lagerstrasse 28b, +49 40 800 77750, open every day noon-2am, en.altes-maedchen.com 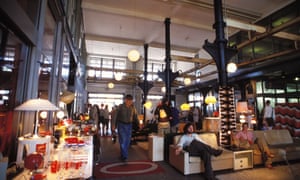 The bohemian Sternschanze neighbourhood is Hamburg’s old meatpacking district, and every Saturday morning the cobbled alleyways between ancient abattoirs are taken over by hundreds of stalls selling vintage clothes, books and paintings, tatty junk and crystal chandeliers, expensive antiques and heaped boxes of bric-a-brac at €1 an item. And there is a real flea market spirit because selling new goods is not permitted. Pop into the Pfortner Hauschen, a minuscule bar in what was the abbatoir’s Gate House, where genial owner Jurgen prepares traditional herring and gherkin fischbrötchen sandwiches.
• Neuer Kamp Strasse 30, Saturday 8am-4pm 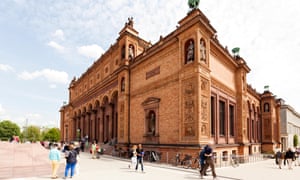 Hamburg’s museum mile, which takes in five major galleries, is bookended by two very contrasting art institutions. At the northern end, close to the main station, Hauptbahnhof Nord, is the venerable Kunsthalle, housing one of Europe’s largest art collections. At the southern end is the Deichtorhallen, two 19th-century market halls transformed into exhibition venues for contemporary art and photography. The original Kunsthalle is an imposing 1847 red-brick building that has just completed a massive €24m renovation, showcasing old masters such as Cranac as well as 20th-century artists such as Paul Klee, Oskar Kokoschka, Max Ernst and Picasso. Adjoining is a concrete and glass modern gallery, exhibiting the likes of Yves Klein, Warhol and Tracey Emin. The Deichtorhallen lies in the shadow of the towering glass offices of Der Spiegel. The bare, minimalist Art Hall features avant-garde artists such as Sigmar Polke, Baselitz and Beuys, while shows at the Haus der Photographie range from Martin Parr and Richard Avedon to Sarah Moon.
• Kunstmeile Pass for all five museums €36 (discounts available), under-18s free, kunstmeile-hamburg.de 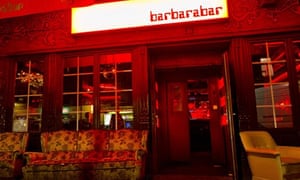 The red-light strip along the Reeperbahn is, of course, seriously sleazy, especially the infamous walled-off street for gazing at sex workers. But the Reeperbahn is just as exciting for live music, bars and dance clubs as it was when the Beatles started their career here in 1960. On Grossefreiheitstrasse, bands are still playing every night at mythical Beatles venues such as the Indra Club and Kaiserkeller, while the Mojo is a serious jazz club. But today the really packed places where locals hang out are tiny bars with in-house DJs, no entrance fee and cheap drinks, like Barbarabar and the adjoining Rosi’s Bar. They’ll follow that with last drinks up the street at the grungy Hong Kong Hotel bar, which never closes.
• Hamburger Berg 11, open 8pm till late, barbarabar.de 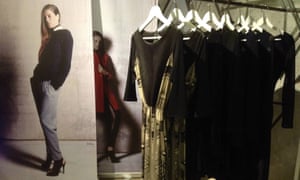 Although becoming slightly gentrified, the St Pauli neighbourhood of Karoviertel is one of the Hamburg’s most laid-back, arty districts, especially Marktstrasse, which is lined with design boutiques, vintage fashion outlets, vinyl record stores, vegetarian diners and an irresistible cake shop, Gretchen’s Villa. The first shop on the street is Maison Suneve, showcasing the contrasting mix of minimalist black and white outfits and colourful graphic prints created respectively by local stylist Katharina Czemper and artist Mathieu Voirin. And customers can often get to talk to Katharina – she’s usually around the label’s atelier at the back of the boutique.
• Marktstrasse 1, open Mon-Sat 12-7pm, maison-suneve.com 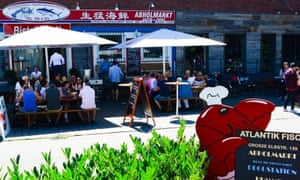 One of the world’s busiest ports, Hamburg is defined by its waterside location on the Elbe river. The city side is now dominated by the flowing lines of the imposing Elbphilharmonie concert hall, but visitors can also check out a funky lightship restaurant, board one of the flotilla of boats that offer a fascinating harbour tour, or sunbathe and party at one of the impromptu summer beaches, such as Strand Pauli. But foodies and fish lovers in particular should take the 111 bus to the modern fish market at Kreuzfahrtterminal. The market is only open to professionals, but around it a host of seafood bistros have sprung up. BistrOcean is a buzzing, cheap-and-cheerful fishmongers that crams hungry diners round rough wooden tables and offers platters of smoked salmon, halibut and mackerel, soused herrings, grilled sea bass, pollack, plump scallops or monkfish.
• Dish of the day from €10, Grosse Elbstrasse 139, +49 40 391123, 6am-4pm, atlfisch.squarespace.com 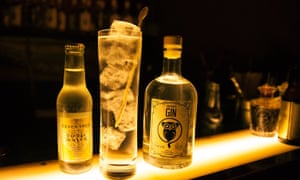 Every night is party night in Hamburg, but Saturday is something special. Plan a crawl of cool cocktail bars like The Chug Club and Walrus, hidden away in the backstreets of St Pauli. The one not to miss is Clockers, a stylish speakeasy with no sign, just a bell outside. The owner, Leonard Orosz, distills his own Clockers Gin, perfect in a “gin basil smash” cocktail. The bar soon turns into a dance club, while an upstairs salon with leather chesterfields is the place for a more intimate drink. Be prepared to find indoor smoking allowed in most Hamburg bars. End the night at the more established Christiansen’s, whose owner, Uwi Christiansen is one of the world’s best-known mixologists. Then, towards dawn, walk down to the Sunday Fischmarkt on the Elbe, whose 100-year-old auction hall is filled with crowds dancing to a rock’n’roll band till midday.
• Paul-Roosen-Strasse 27, Mon-Sat 7pm-3am, clockers.hamburg

The trip was organised by cometohamburg.com with flights provided by Hamburg Airport Authority