Master sommelier Doug Frost is “not a big believer” in the overarching importance of matching food and wine. “I like to match wine and people,” he cheerfully told our group.

In other words, a person’s enjoyment of a wine has to be more important than the wine’s relationship to the dish. And as he regained his seat in the Royal Princess’ Crown Grill steakhouse, several tables of people began to focus on a white Burgundy (for me: I still just don’t love chardonnay).

The occasion was an introduction to Princess Cruises’ new wine list, which it said was expanded by 50% to include nearly 150 offerings.

The line also overhauled its cocktail and beer menus: 17 international and craft beers were added to the lineup, and mixologist Rob Floyd consulted on the cocktails.

But at the Crown Grill last month, it was all about wine. After all, a wine list is an important asset, and a cruise line must choose its list with special care. It can only carry a certain number of bottles in the hold, and travelers are increasingly looking for food and wine that reflects their destination.

Frost, who helped craft the list with Princess’ teams, explained to the group that the lineup was a departure from the previous, which was more California-centric and “a lot of the standard names” — not that there’s anything wrong with that, he added.

But his charge, he said, was to find interesting wines that reflect particular places and the unique styles of those places. Frost also took a moment to demystify that vintner term terroir: “It just means ‘terrain,'” he said.

“The idea is that the wine smells and tastes like the place it came from.”

In keeping with this approach, the wines presented at the Crown Grill spanned the globe: France, Australia, South America, California and Italy. 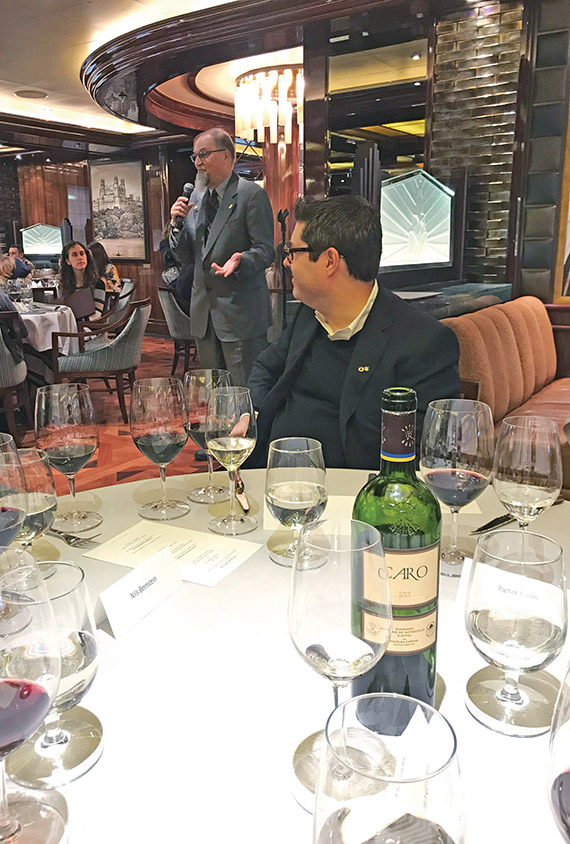 Frost’s background is impressive; he holds both master sommelier and master of wine qualifications, one of only four people to pass both exams. Yet he took a very down-to-earth approach to the wines as they were poured for the group to try — with food pairings, of course, because it is still important to present something that enhances the flavor of the wine, and vice versa.

That approachability extends to the list itself. Wines on the list are grouped by texture and taste, instead of by grape or region. The high rollers might peruse the “aristocratic and elegant” category, but if “lush and perfumed” merlot blends are more your taste, or perhaps you like “spicy and layered” Italian wines or “crisp and tangy” whites, there is potentially a category for all imbibers.

In a forward-thinking move, the menu also marks wines that are biodynamic, organic or vegan. A tiny Princess Seawitch logo next to a wine means it’s recommended “for unusual quality and value.”

The highlight on the Royal Princess was a first-growth pour: A 2011 Chateau Lafite Rothschild from Bordeaux’s Pauillac commune. “On the palate, the wine is massive, displaying power and elegance at the same time,” according to Princess’ menu notes. The chatter from the tables increased markedly as the wine was poured from decanters.

I’m not a dessert-wine drinker normally, but I loved the 2011 Chateau Rieussec Sauternes, which was served alongside a chocolate raspberry mousse in the shape of a heart, part of Princess’ association with the chocolatier Norman Love.

Other diners particularly liked a California cab, the 2013 Shafer Hillside Select, which was smooth and rich and can be had for $429.

Princess did not present its other big-ticket bottle, a 2010 Chateau Petrus. A guest can buy a bottle for a cool $5,288.

But the wine list spans as many price ranges as it does regions: Many bottles go for under $50, and many of those are in the $30 range.

Wine by the glass under $12 (as well as beer, cocktails, water and soft drinks) is included in Princess’ Premier Beverage Package, which is $60 per day.

The package also includes a 25% discount on all bottles of wine.

This Is the Creepiest Corner of New York State

I slept in the jungle and survived!