Swinging along to Ireland for a golfing getaway road trip that takes in three world-class courses (and no teeing off with time-consuming Covid tests!)

Dungannon Golf Course in County Tyrone was buzzing. In the clubhouse – beyond a picture of Darren Clarke, the former Open champion, who learned his craft here – players chatted. All seats taken. Plenty of banter and Guinness consumed.

Wallace McCarroll, the club’s ebullient secretary, joined us. ‘Since the lockdowns, membership has shot up to 1,000 from about 600. People are taking to the game because you can get out and about. Long may it last.’

With football (tearfully) out of the way and with the Open Championship just finished at Royal St George’s in Sandwich, Kent (where Clarke won his title) a golf holiday is surely in order. And where better than in Northern Ireland, home to dozens of wonderful friendly courses, with no quarantines or time-consuming and expensive PCR tests? 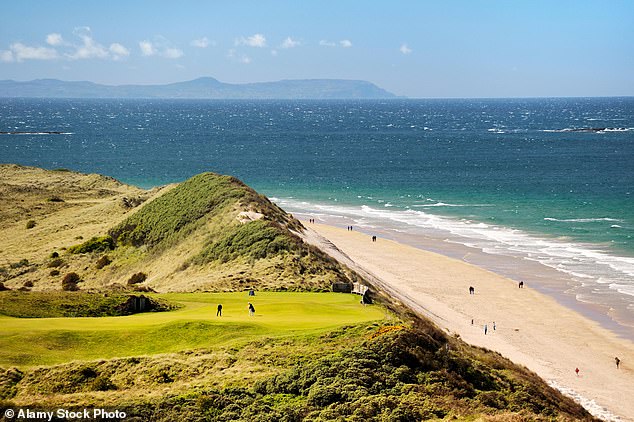 A golfing road trip, you soon find, is a great way to explore the province. Dungannon, an hour’s drive west from Belfast, was the start of a long weekend that was to take in Lough Erne in County Fermanagh and Portrush in County Antrim. Three counties in four days, beginning on the rolling hills of Tyrone.

Eighteen undulating holes without many hazards was the ideal reintroduction to the game if you had not (like me) played for a while. The highlight was the 9th, a par three designed by Clarke himself with a water feature by the green, a replica of the short 12th hole at Augusta in Georgia where the U.S. Masters is held.

Up and down the hills we went on a sunny Saturday, getting back into the swing of it. Then we hit the superbly quiet roads to Lough Erne. This grand hotel-resort was where the G8 was held in 2013 and it is a fabulous setting. Three-times Open winner Nick Faldo designed Lough Erne’s tricky course, which enjoys many spectacular holes. 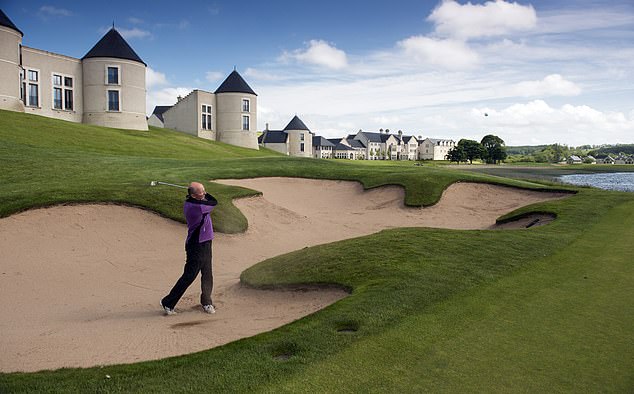 Reeds and water feature (a lot) and what a delight it was to score a par on the terrifying 10th with a green sloping perilously on an island, before returning along the loch for the hotel-side finale.

From Lough Erne to Portrush is a two-and-a-half-hour drive northeast to the ‘Causeway Coast’ named after the Giant’s Causeway of 60-million-year-old hexagonal rock formations. We clambered over the peculiar ancient stones, visited the medieval ruins of Dunluce Castle and stopped by at Ballintoy’s lovely little harbour.

Next up was the biggie: Royal Portrush Golf Club, scene of the last Open in 2019. This course traverses tumbling sea-facing dunes, the holes rolling this way and that.

Perversely, Portrush was quiet in a normal year, many summer visitors are from America.

Two pars and a birdie. You improve a bit on a golfing holiday were followed by a pint or two of the black stuff and a dram or two of Bushmills whiskey at the nearby Bushmills Inn that evening.

What a fine way to end a fine golfing getaway. We raised our glasses to our golfing adventure with no travel worries, but plenty of good times, across the Irish Sea.

Mantra on View Hotel team members get up and close ·