Falling for Croatia… hook, line and sinker: Savouring the tastiest seafood in the world in Kvarner Bay and discovering why foodies flock to this stretch of the Adriatic coastline

A silver platter is placed on the starched white tablecloth with a theatrical flourish, and a dozen orange sea monsters wave their menacing claws in my direction.

Despite looking like gigantic prawns (which belong to the shrimp family), those killer pincers belong to the heavyweight lobster family. ‘Welcome to the biggest scampi in the world,’ restaurant owner Daniela Kramaric announces proudly, ‘and the tastiest and freshest seafood you will ever enjoy.’

Her Croatian harbour restaurant, Plavi Podrum, looks across Kvarner Bay from where this langoustine was plucked an hour earlier. Local scampi is always caught in cages, Daniela explains, rather than trawled with nets as it keeps them clean and does not damage the seabed.

Toby Walne explores the culinary delights of Croatia’s Kvarner Bay on a four-day foodie trip. Pictured is the town of Volosko, which lies by Opatija, the first stop on his tour 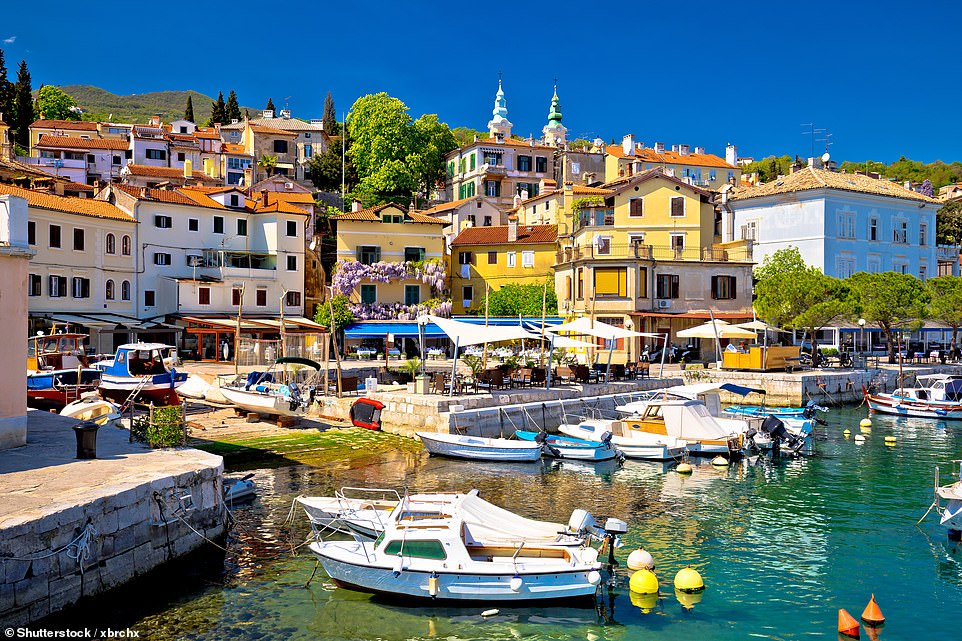 Opatija (pictured) is a culinary destination of choice for those seeking ‘rather more than fish and chips’, says Toby 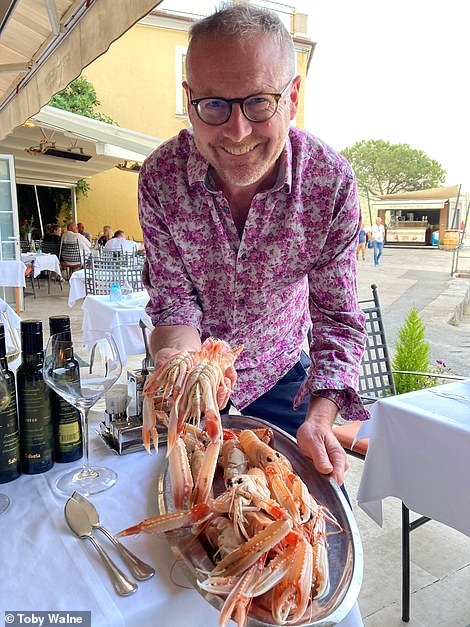 Tuck in: Above is Toby with a platter of langoustines at Plavi Podrum restaurant in Opatija

And unlike the miserable breadcrumb bites found on British supermarket shelves, these gastronomic delicacies are not only alive and nipping but stretch out almost a foot long.

A world-record scampi measuring 17in was caught in Croatia last year. And it’s a little-known fact that the raw tuna caught around Croatia accounts for two-thirds of the fish it exports to Japan. The Japanese value the fatty qualities of this Adriatic bluefin tuna, fed on the shoals of oily sardines and anchovies which are local delicacies in their own right.

It’s our first stop on this four-day foodie trip, and we’re at a seafront table in the coastal town of Opatija, a culinary hotspot where the mineral-rich sea mixes with fresh spring waters to offer the perfect breeding ground for what is rightly called some of the best seafood in the world.

This former 19th Century health resort for the Austrian-Hungarian aristocracy – where Sigmund Freud rubbed shoulders with the likes of playwright Anton Chekhov and composer Gustav Mahler – is now a culinary destination of choice for those seeking rather more than fish and chips.

My chosen scampi is whisked away to be cooked before returning along with a black bib, water bowl and what look like surgical instruments. Daniela orders me to squeeze the scampi by the head between two fingers until I hear a crack, then to whip off the thinly armoured body shell with a pair of pliers. A separate tool is required for tackling the claws. The white flesh behind the head is the most sought-after meat, and its delicate sweet flavour melts on the tongue.

After spoiling our taste buds, it’s time to check in to the nearby luxury five-star Hotel Navis.

Park above the clifftop and the only sign of a hotel is a glass box with a lift inside. Press the button and it descends into what seems like the lair of a James Bond villain. 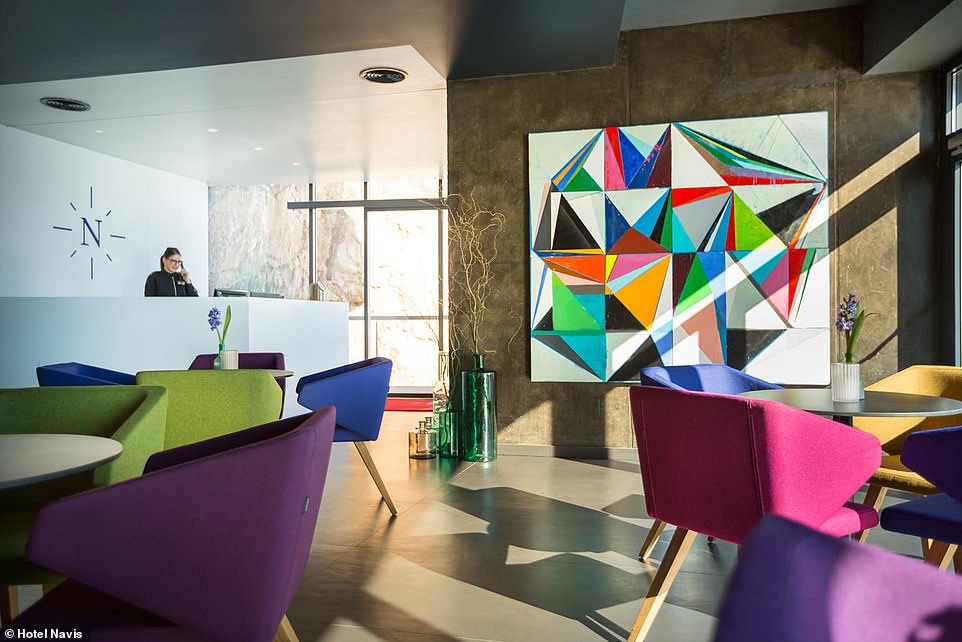 After spending a day dining in Opatija, Toby checks in to the nearby luxury five-star Hotel Navis. Above is the hotel’s lobby 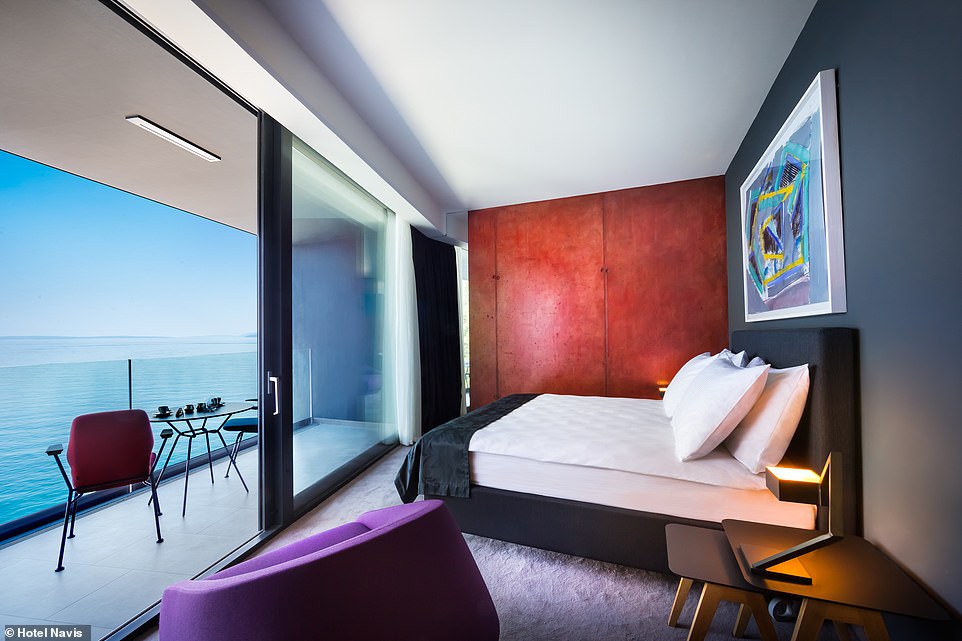 Toby likens Hotel Navis, which is located above a clifftop, to ‘the lair of a James Bond villain’. Above is a Superior Room with a sea view

Corridor walls padded with psychedelic carpet deaden any noise, while right in front is a huge 16ft glass panel with balcony opening up to a dazzling azure horizon.

Next morning I buckle up to tackle a racetrack road that hosted the Adriatic Grand Prix run by Mussolini in 1939 when the region was still part of Italy. It joined Yugoslavia after the Second World War before becoming independent in 1991.

But this glorious stretch of the Opatija Riviera has lost none of its Italian style. Italy lies less than 20 miles from the Croatian coastline and is separated only by a tiny strip of Slovenia. Follow this route and you’ll be pleased if you’ve hired a small vehicle – the hairpin bends that wind up to the medieval town of Kastav are spectacular. 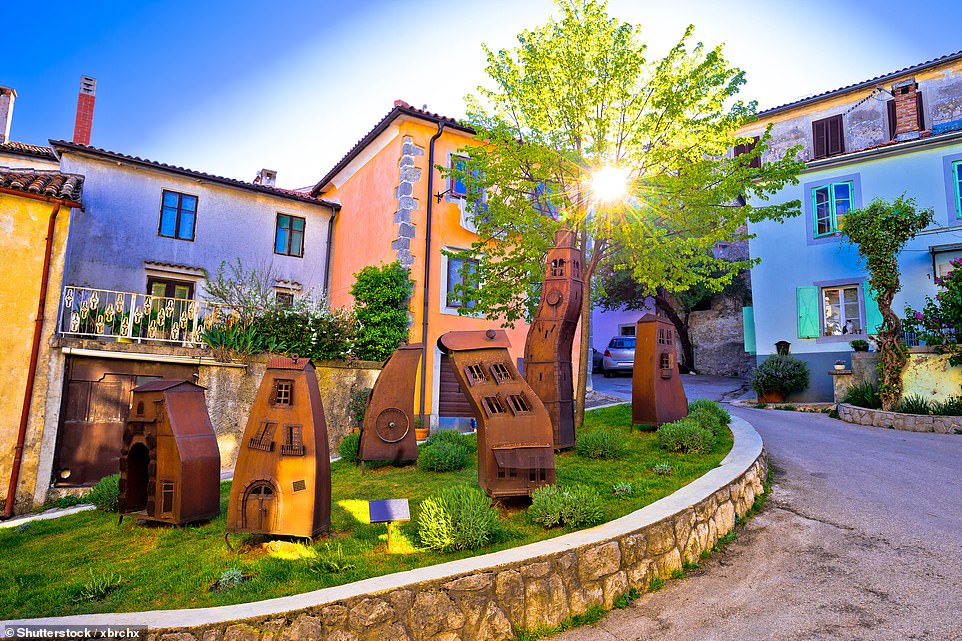 According to Toby, the hairpin bends that wind up to the medieval town of Kastav (pictured) are spectacular for drivers 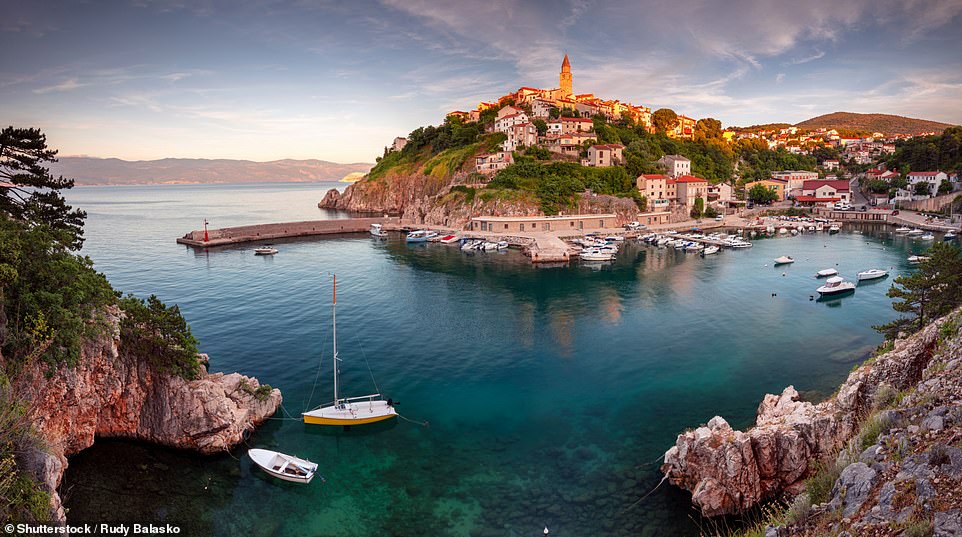 The Kukuriku restaurant and hotel is tucked away on a small square. Owner Nenad Kukurin traces his family back to the 17th Century when they rebelled against tax hikes and drowned the local ruler. But who would quibble when a top three-course meal for two costs £90. And red mullet fish garnished with wild asparagus tastes all the more delicious with Croatian Tomac Millennium sparkling wine.

Island-hopping is a wonderful way to explore Kvarner’s landscape and food.

Half an hour’s drive south from the airport lies the hilltop restaurant Nada in the coastal port of Vrbnik. As you take in the views, you can savour a plate of mussels or fresh octopus salad with black cuttlefish-ink stained bread and local virgin olive.

Or take the car ferry from Valbiska on Krk to Merag on Cres. This 41-mile-long slither of wilderness has a population of just 300 but is also home to white-headed griffon vultures, which you can spot circling above as you travel through this unspoilt land. Twelve miles south of the port, turn off the main road to Bukaleta tavern in Loznati, and thanks to the diet enjoyed by the island’s roaming sheep you can dine on lamb naturally infused with sage and rosemary. 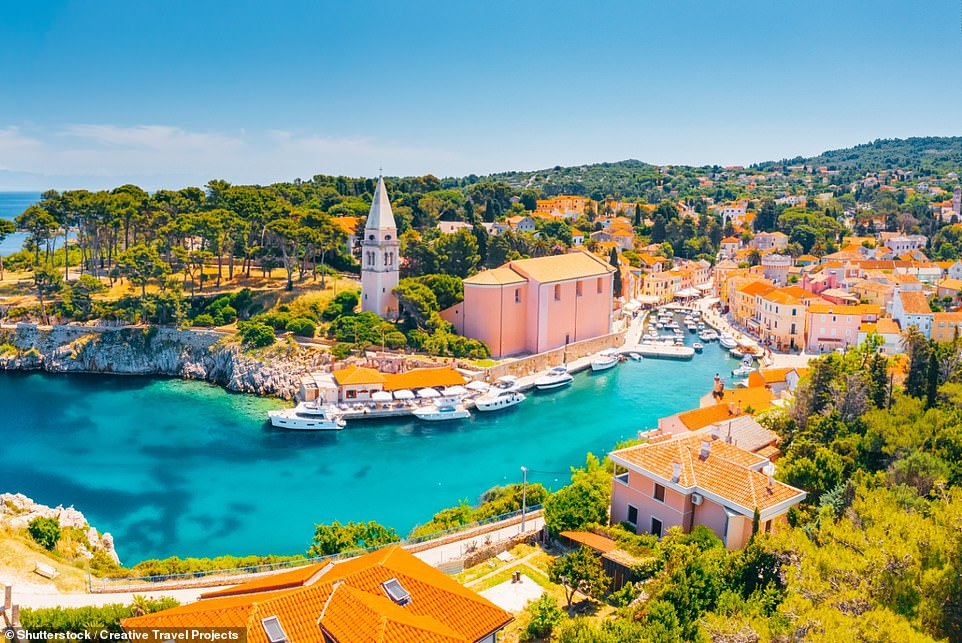 A narrow bridge connects Cres with the island of Losinj to the south. You can hire a boat to take you out to observe the hundreds of bottlenose dolphins between these islands, but my mission is to visit the Michelin-starred Restaurant Alfred Keller at the Hotel Alhambra. Here we are treated to a five-course menu that includes not only the obligatory scampi – delicious as sliced carpaccio with mint – but grilled sea bass with salted lemon foam and a plate of tuna sashimi.

A few yards from the restaurant, along an illuminated promenade, is the five-star Hotel Bellevue. This vast complex offers myriad spa treatments and stone-slabbed sun lounge areas – a welcome way to enjoy a rugged limestone coastline where beaches can be rocky.

Sadly, my gastronomic adventure is now complete. Yet I leave with a newly discovered passion for Croatia’s bountiful seafood. 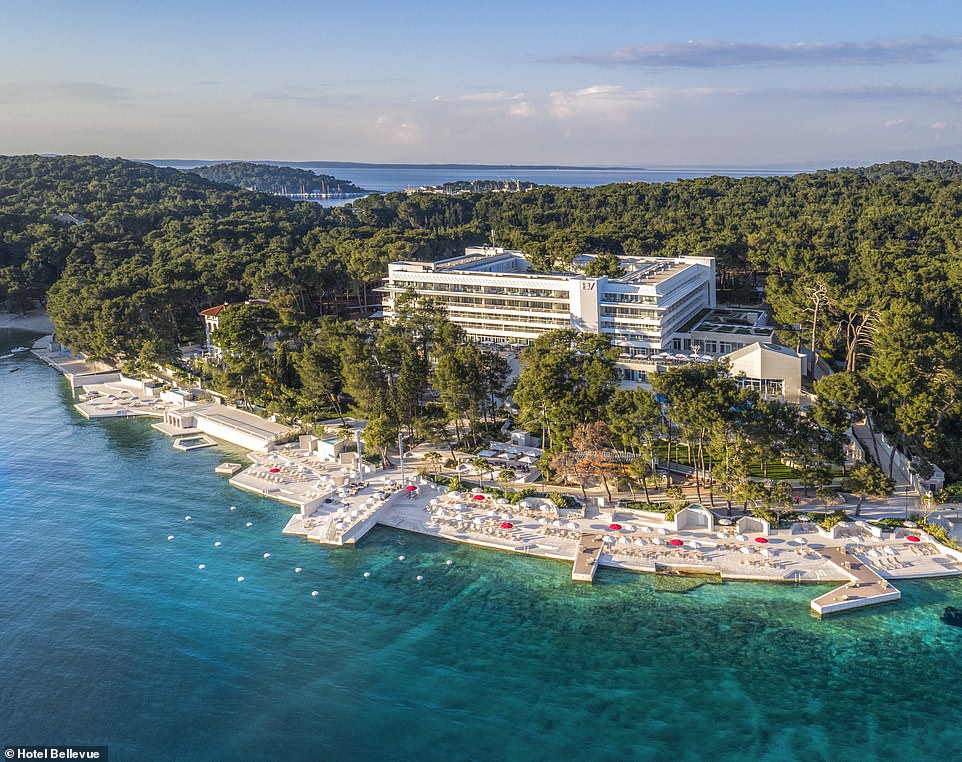 The five-star Hotel Bellevue, pictured,  is a vast complex that lies on the island of Losinj 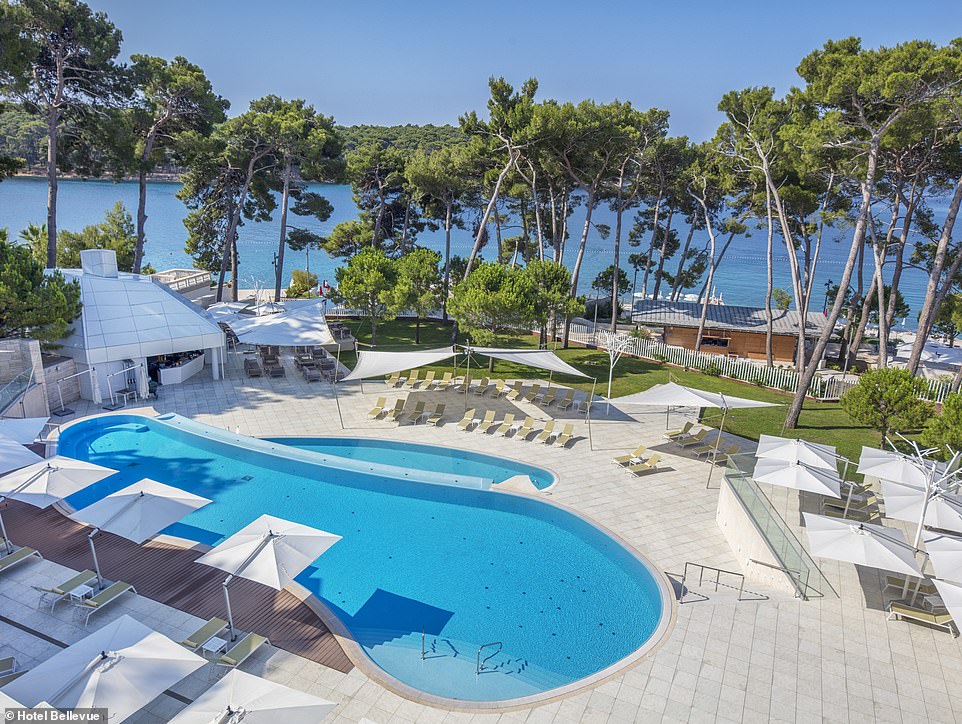 Toby Walne was a guest of the Croatian National Tourist Board (croatia.hr). B&B at Hotel Navis costs from €250 (£212) per night for a double room (hotel-navis.hr/en).

Visit Britain: UAE and other GCC visitors love shopping, dining, and the sights