Google Maps Street View was developed in 2007 as a way for users to map their way around the world. However, along the way it has begun to discover some rather unexpected moments happening in various countries.

By attaching cameras to dedicated Google cars, or being carried by Google Maps’ workers on foot, the programme is able to snap images of streets and cities across the globe.

These images are then stitched together in post-production to create a virtual world in which users can navigate their way around.

While this is handy for getting specific directions or finding distinct locations, it has also led to some rather surprising discoveries.

Increasingly, these occurrences are to do with citizens who are photographed in some rather odd positions. 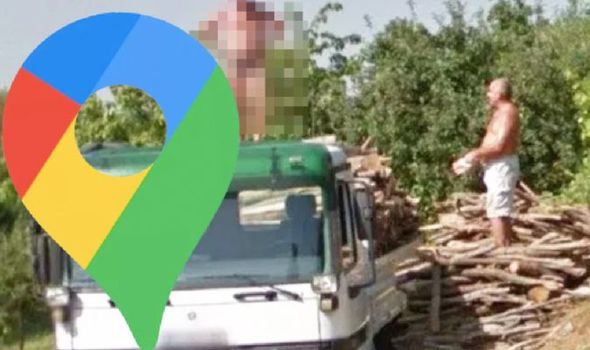 One man left viewers open-mouthed when he was spotted making a very bold move while standing on top of a lorry.

In an unknown location, Google snapped the lorry pulled over at the side of a country road.

Trees and foliage surround the scene where two men can be seen, apparently mid-conversation.

Bizarrely one of the men is standing on the roof of the large, white vehicle.

The second man is stood on a pile of logs to the left of the vehicle.

He can be seen wearing just a pair of grey cargo shorts, his top half completely unclothes.

Admittedly it does appear to be a rather sunny day, which could explain his clothing choice.

However, his counterpart appears to have outdone him on the summer ensemble choice. 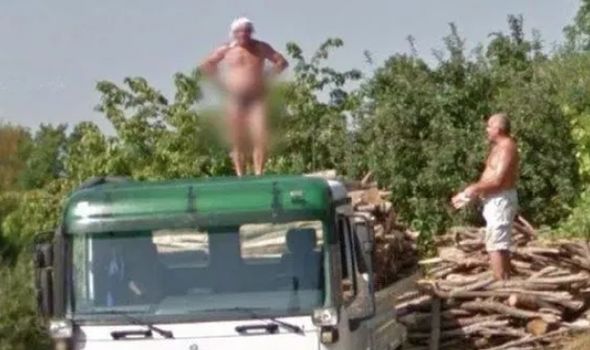 The white-haired man standing on the roof of the vehicle appears to be completely naked.

Whether he is trying to make a statement or simply cooling off in the sunshine is unknown, however, he certainly caught the attention of some onlookers.

The man is stood with his hands on his hips, seemingly making no attempt to hide his nude body from the passing Google camera.

In a bid to conceal his nether regions, Google Maps has blurred the lower half of the man’s body.

This is something Google often does when it discovered “inappropriate content” on its Street View platform.

As a result, the tech-giant normally places an automatic blurring feature over anything it deems to fit into this category.

Further saving the man from virtual embarrassment, Google has also blurred his face to conceal his identity.

21 gorgeous pictures of places we are dreaming of