Incredible cuisine, unparalleled views and, of course, Port straight from the source: 11 reasons Porto needs to be your next city break

It boasts incredible buildings, mouth-watering cuisine and is, of course, the home of everyone’s favourite Christmas tipple, Port.

All of this makes Porto, Portugal’s second city, the perfect place for an urban break.

So whether you’re looking for somewhere to wine and dine in the sun, search out cultural curiosities or simply enjoy a city break without the overbearing hustle and bustle, here are 11 reasons why you should put Porto at the top of your must-visit list right now… 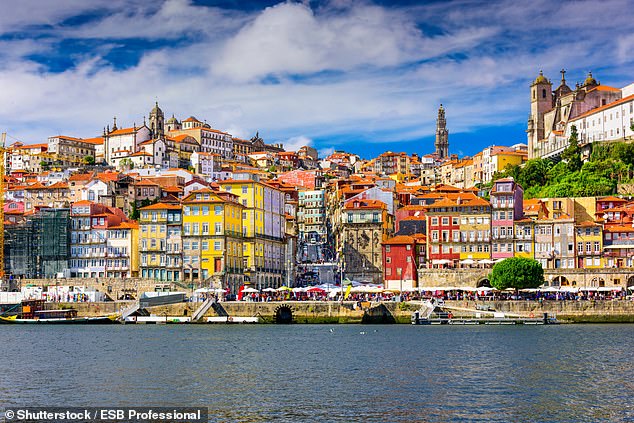 You don’t have to be an architecture expert to see why Unesco has declared most of the heart of Porto a world heritage site.

Its beautiful winding streets are home to tall, narrow and colourful buildings that are guaranteed to brighten your day.

And as these buildings snake up Porto’s hilly roads, a wander to the highest point also offers unparalleled views across the stunning cityscape and the Douro River.

The art and cultural scene

Porto is awash with galleries, museums and music venues that are like no other.

Art fans will love the contemporary art museum of Serralves – known for its cutting-edge exhibitions. It is set in a stunning 45-acre park – perfect for walking and soaking up the culture.

If music is your thing, try the Casa da Musica, Porto’s famed concert hall and home to the city’s symphony orchestra. You can take a tour of the hall and, if you are lucky, you might catch the orchestra rehearsing.

It’s the home of Port 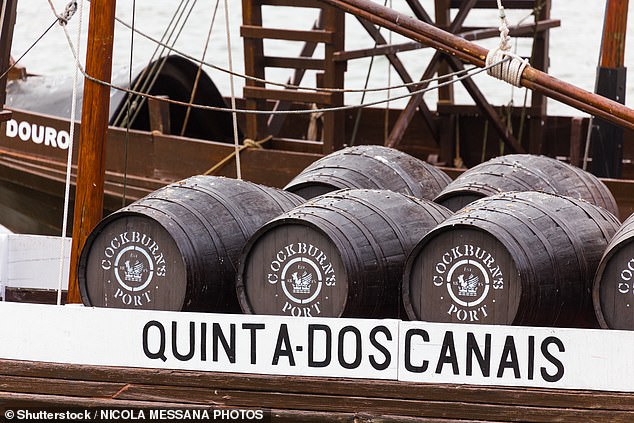 Porto is the home of Port, which was invented in the 17th century in the Douro Valley

You cannot come to Porto without tasting its famous fortified wine, Port.

It is believed the drink was invented when two 17th-century British merchants, travelling through the Douro Valley, close to Porto, came across monks drinking a local wine with grape spirit added to it early in its fermentation so that it kept its natural sweetness.

The merchants began shipping this wine back to Britain with the fortifying spirit helping to preserve the wine on its journey as well as giving it a unique sweet taste.

The same production methods are mostly still used today and there are many port houses around Porto, where you can enjoy the tipple. And Brits will certainly recognise one of the biggest producers in the region: Cockburn’s, originally founded in 1815 by Robert Cockburn and his brother John. Today, the Symington family, whose ancestry in the port industry dates back five generations, are the proud owners and still oversee every part of the process.

Long an essential part of British Christmases, the trusted and beloved brand celebrates the 50th anniversary of the nation’s favourite Port – Special Reserve – this year.

And while a glass or two over Christmas is a must, a visit to the Cockburn’s Lodge is equally something worth toasting. This is the largest Port cellar in the historic area of Vila Nova de Gaia, which plays host to one of the greatest collections of oak barrels of any Port cellar, making it a must for any discerning drinker during a stint in this wonderful city. 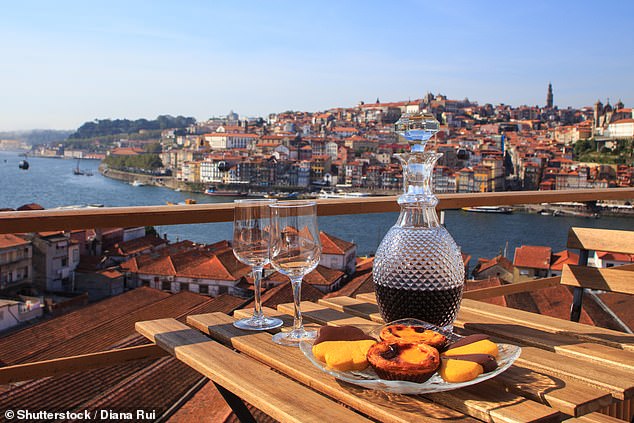 Seafood including the national delicacy bacalhau is a must-try in Portugal as is the famous custard tart, pastel de nata

From street food markets to fine dining – Porto has incredible cuisine on offer.

Given that the city is extremely close to the Atlantic Ocean expect great seafood – and lots of it – including the national dish of bacalhau – dried salted cod, delicious grilled octopus and lamprey – an eel-like fish.

Other incredible local dishes include a hearty tripe and bean stew called Tripas à Moda do Porto and the incredibly popular lunchtime snack, Francesinha – a sandwich filled with steak and several different types of sausage and ham, finished off with a delicious covering of cheese and tomato sauce.

Or, for those with a sweet tooth, check out one of the city’s many bakeries and don’t forget to try the famous Portuguese custard tart – the pastel de nata.

This year Cockburn’s Special Reserve, the nation’s favourite Port, celebrates its 50th anniversary. To mark the momentous occasion, they are giving you the chance to win a fantastic selection of amazing prizes.

Celebrate the 50th anniversary of Special Reserve with a two-night stay in Porto for two people.

The trip includes flights to and from Porto, accommodation, and a private tour of the Cockburn’s Lodge and tasting of the whole range of Cockburn’s Port.

Competition entrants will also have the chance to win one of 24 bottles of Cockburn’s Quinta dos Canais 2010 Vintage Port, while 1,250 winners will receive 4 x 35g bars of Green & Black’s most-loved flavours.

The many beautiful bridges 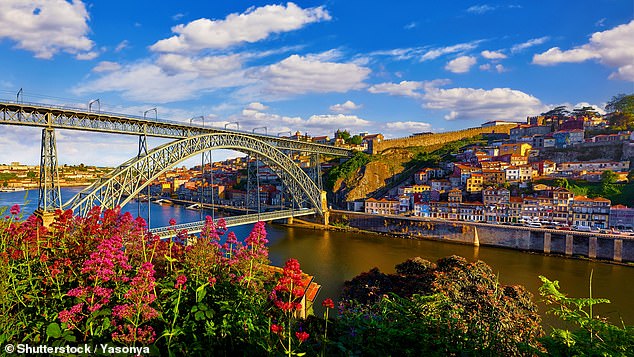 The famous Ponte Luis I bridge, which crosses over the River Douro. There are six bridges in the city

There’s a reason why Porto is known as the city of six bridges – and it’s exactly that, it has six bridges!

One of the most famous and most pictured is the Ponte Luis I – designed by a German engineer who was a student of Gustave Eiffel, the man behind the majestic Eiffel Tower in Paris.

Take a walk across the lower deck of the bridge for gorgeous views of the old part of Porto and the terracotta roofs of the Port cellars on the South side of the river.

It’s right next to the beach

You might not think a city break would include time on the beach.

But Porto actually boasts some of the most picturesque stretches of sand in Portugal – with many having won blue flag awards.

Praia de Gondarem is a favourite with tourists thanks to its bright golden sand. But beware if you fancy a paddle or a swim. The waters of the Atlantic Ocean can be bracing! 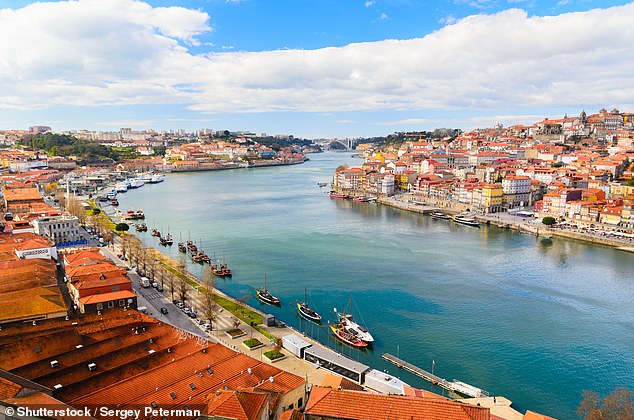 Porto sits on the banks of the mighty River Douro, which literally splits the city in two.

And the river provides one of the best ways to see Porto and its amazing landscape.

There are many companies offering river cruises which take in sights such as the Douro Valley as well as the city’s beautiful bridges.

Or for a more unconventional way of seeing the riverbank, take the Gaia Cable Car, which whisks riders along the waterfront to the beautiful hilltop park of Jardim do Morro in around five minutes.

If you fancy splashing the cash, there are plenty of amazing shops in Porto to spend your money.

The main drag is Santa Catarina, where you can find every brand you could ever want.

Or for crafts and trinkets, try one of the city’s street fairs. One of the most popular is Porto Belo market, which is held every Saturday, selling clothes, antiques and jewellery. 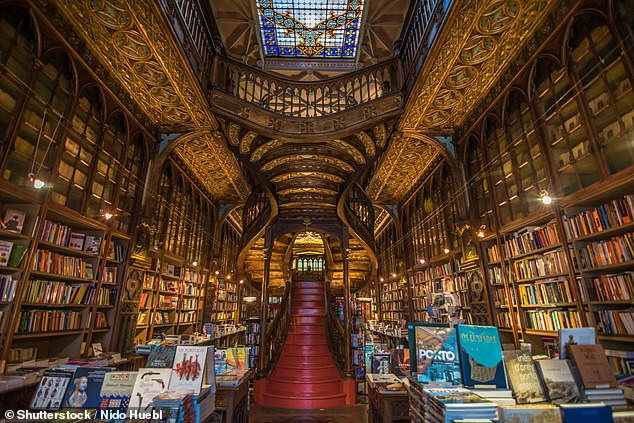 Inside the Livraria Lello – one of the oldest bookstores in Portugal, which is thought to have been inspiration for J.K Rowling’s Harry Potter books

Bookworms will love Livraria Lello – one of the oldest bookstores in Portugal.

The shop was opened in 1906 by José and António Lello and is instantly recognisable thanks to its gothic-style facade.

And if the inside also looks familiar, you would be right. It’s thought it provided a young J.K. Rowling with the inspiration for her Harry Potter books. The author lived in the city during her youth and is said to have been a regular at Livraria Lello. 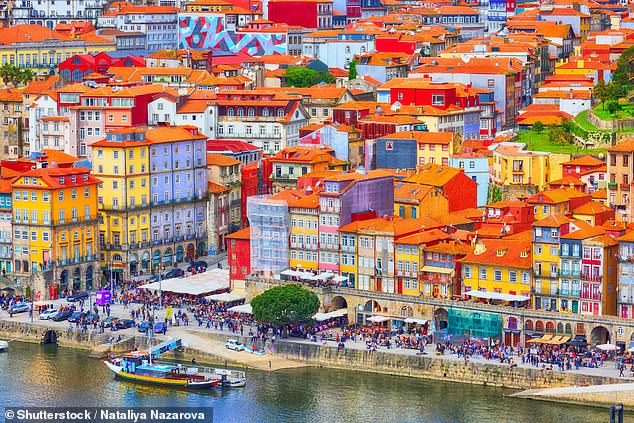 The Ribeira is one of the oldest neighbourhoods in the city and is packed with bars, cafes and restaurants

One of the most incredible neighbourhoods in Porto is Ribeira, which is located right on the city’s waterfront.

The district – one of the oldest in the city – is packed with bars, cafes and restaurants – the perfect place for people watching.

One of the must-see buildings here is Igreja de São Francisco (Monument Church of St Francis). It may just look like your average church from the outside, but inside it has a dazzling interior that has been created using over 300 kilos of gold.

It goes all out for Christmas

If you fancy spending part of the festive season in Porto – you won’t be disappointed.

From the end of November, the city is bedecked in twinkling Christmas lights and welcomes its winter ice rink.

On Christmas Eve, families gather together for the traditional feast of salted cod, potatoes and greens before heading to church.

While on Christmas Day itself, the locals celebrate by snacking on sweet treats, nuts and fruit and making decorations of holly and coloured ribbons.

COCKBURN’S PORT: THE TASTE OF CHRISTMAS 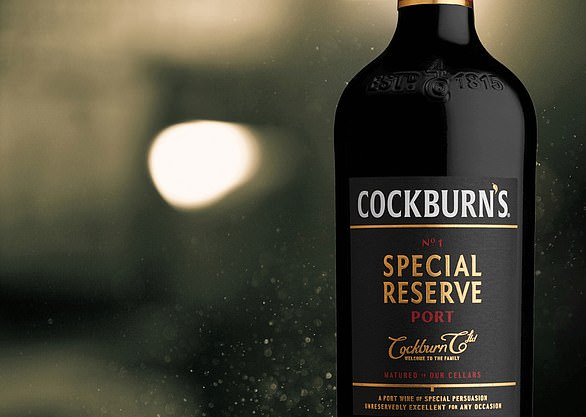 Christmas wouldn’t be Christmas without a celebratory glass of port with the family.

And Cockburn’s Port dates back to 1815, when it was founded by Robert Cockburn and his brother John in Porto.

It is now owned by the Symington family, whose ancestry in the port industry dates back five generations. 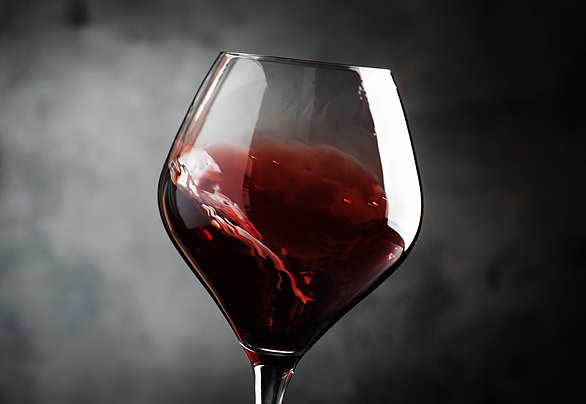 But what should you pair it with this Christmas so the whole family can enjoy it?

Of course, the classic combo is cheese, especially Stilton, but what about trying it with dark chocolate instead?

Or enjoy it the traditional way – a glass of Cockburn’s Special Reserve with Christmas pudding and mince pies after your lunch.

Top 5 things to explore and do in Mauritius

20 Disney Cruise Tips & Secrets No One Tells You

Finland has become one of the first countries to top out its Expo 2020 Dubai pavilion. At a ceremony held at the Expo 2020 Dubai site, Finnish delegates, including Finland…

10 of the best outdoor adventures in Europe: readers’ tips

Winning tip: Cape Wrath Trail, Scotland Walk 230 miles in Scotland and go days without seeing anyone. I navigated the unmarked trail, at times with no path, through soaring mountains…

Seven of the best ridge walks in Britain

I meet Richard Warren from Wasdale Mountain Rescue at the most appropriate place, a pub adorned with photographs of people in farcically inadequate clothing, carrying outdated equipment while they tackle…

100 Valentine’s Day Hashtags That’ll Give You The Feels

With February right around the corner, you're about to see heart-shaped balloons and oversized stuffed animals everywhere. You can feel the love in the air — and even if you're…
Recent Posts
We and our partners use cookies on this site to improve our service, perform analytics, personalize advertising, measure advertising performance, and remember website preferences.Ok