The remains of a queen, an ancient ceremonial pot for drinking chocolate and part of the skull of a sacrificed child have been discovered by archaeologists and explorers in new forays into a landscape once dominated by the Maya.

Among further finds revealed in a new National Geographic TV show is a skull discovered in an underground submerged cave and apparently used as an incense burner, as well as fresh insights into city defences, and the investigation of pyramids – visited by researchers for the first time – that were recently brought to light by laser mapping.

Experts say the detection technology, called lidar, shows that the Maya civilisation existed on an astonishing scale, and has revealed the remains of 60,000 structures, from pyramids to whole cities, located deep in the dense Guatemalan jungle. 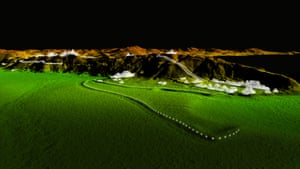 Archaeologist Francisco Estrada-Belli, whose work is featured in the series, said the new finds were astonishing.

In Holmul – an ancient city in northern Guatemala that Lidar revealed was far larger than previously thought – the team excavated the floor of what was once a palace throne room and discovered two sets of remains – a woman and a man that the team believe to be a queen and king. “We are quite confident [the male] is the king because we have this big vase with the name of a very important king from a nearby city that controlled this one,” said Estrada-Belli. “No one other than a king or queen would have possession of that kind of [item].”

Estrada-Belli added that previous pairs of remains from the site, discovered above the latest finds, were already identified as Maya royalty.

How digital technology is taking Mayan culture back to the future

This “vase”, it turns out, was a pot for ceremonial drinking chocolate. “We know that the warriors and the high elite enjoyed different kinds of chocolate drink. This one, according to an inscription on the vase, is a maize gruel chocolate drink,” said Estrada-Bell. “We know from many references elsewhere that on certain important occasions a king would invite his allies and his under-lords and would have some of these vases made for himself and then he would donate them to his closest allies. We think this is why this individual, who is definitely not the person named on the vase, got to have it.” 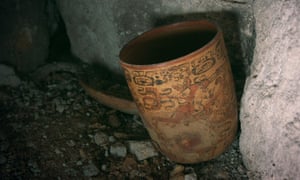 The team say that the various strands of evidence, including from the chocolate pot and radiocarbon dating of the remains, puts the king’s burial at between 554 and 558 AD. The pot itself, says Estrada-Belli is “incredibly beautiful”.

“This is amazing,” he said. “This is the only the second vessel with this king’s name that has been excavated by archaeologists.”

The team also visited pyramids previously unknown to researchers. Located outside the city of Witzna in northern Guatemala, around a huge hill, these structures were among those brought to light by the Lidar mapping.

At the base of the hill, one of the pyramids had been burntand on top was a mound of broken pottery. It also featured a broken monument, which had also been burnt. 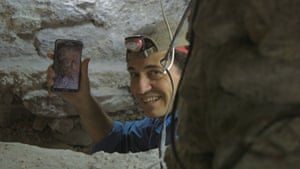 And there was more. “On the top of the hill there was one pyramid by itself, which was completely unusual – you don’t see that anywhere really,” said Estrada-Belli.

The team also made a grisly find in a well that had been dug in the plaza in front of the pyramid: the skull of what the team believe was a sacrificed child.

“Only the top of the skull was there and a few teeth,” said Estrada-Belli, adding that child sacrifices are well documented. “I don’t want to paint the Maya as these bloodthirsty baby killers, but it wasn’t entirely uncommon.”

Mahbilil Festival to celebrate the best of Kakadu Indigenous Culture ·

Airbnb-style holiday rentals in Madrid could be rendered illegal