Home » Active Travel » Iceland’s hotting up: Holiday in the the land of Fire of Ice – thermal pools and volanoes 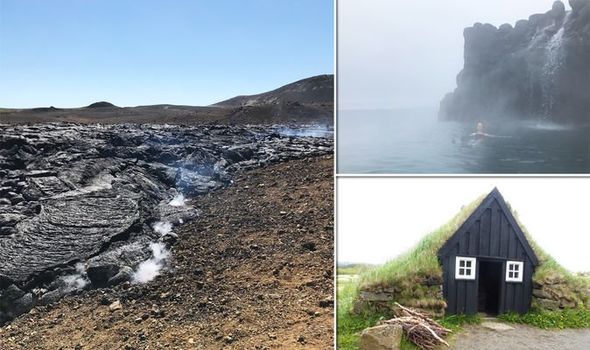 What’s unfathomable is the fact that it may take 50 years to cool down. Welcome to the unpronounceable Fagradalscall volcano in the Geldingadalur valley which has been awake since 19 March and is Iceland’s newest tourist attraction.

We’re six feet away from the magma, standing on the rocky slopes, but I can feel the intense heat emanating from the dollops of lava which look like a liquorice cake mix that’s been roughly scattered over a huge round pan.

It’s the last week of June and a little disappointingly, we’ve been told, the eruptions have been relatively quiet for the past couple of weeks. However, it’s obvious it’s still restless thanks to the enormous clouds of smoke drifting to the heavens.

That hasn’t diminished the curiosity of thousands who trek along the rocky hiking path daily in the hope of witnessing some action. There’s no official route; no signage; just a long snaking trail of people, many with poles, all in sensible hiking shoes, heading in the same direction, up and over the 13ft wall of earth hastily built to protect the valley.

One of the hiking trails on the south rim has already been closed due to the lava spill and there’s still a danger of it reaching the nearest town of Grindavik six miles away, who are ready to be evacuated should they need to.

That first glance, gazing across the sea of steaming magma, quite literally, takes your breath away and is strangely hypnotic. Most people have taken the route up to the high rim in the hope that it rewards them with a view of straight down into the crater itself – it doesn’t. It’s busier than peak season on Everest so we head left and wander along the edge of the lava field.

Volcanologists have determined that the lava is coming from 19 miles within the earth and emerging at 1242 deg C.

We’re in the extremely competent hands of guide, Sveinn Snorri Sighvatsson of Troll Expeditions. An Icelander and an adventurer who has seen – and done – it all, he is only one of five guides in Iceland who is qualified to take you ice climbing, hiking, driving – even volcano trekking. You name it, he’ll do it.

It is, however, perhaps his most recent exploit that will cement his notoriety in Iceland. When the volcano first erupted, not only was he one of the first on the scene after trekking through the night with nothing but a head torch and a map, he famously stripped naked

bar for a pair of rose coloured sunglasses, and stood on the edge of the boiling lava to be photographed ‘promoting’ his friends sunglass range. Obviously, the shot went viral including all the way to CNN. Sadly I can’t report on the sales figures of the glasses as a result.

We clambered over the stark, rocky ground, all the time getting further away from the crowds with Sveinn warning us not to get too close to the gas as it can cause you to faint. Luckily a strong breeze is blowing. With distance between us, it was only then that we could really take in the magnitude of the scene before us.

The power of nature and the speed at which the world can literally open up is simply mind blowing. The whooshing sounds coming from underneath the magma and the cracking of the crust and the occasional opening revealing glowing red lava, reminds us that this volcano is still very much active.

The Reykjanes Peninsula in the south west is where the Eurasion and North American Tectonic plates are drifting apart. Consequently, volcanoes – and earthquakes, sometimes up to 200 per day – are not uncommon here. Out of Icelands 32 volcanic zones, 14 are highly active although this has been the first in the area for 800 years.

They don’t call Iceland the Land of Fire and Ice for nothing.

Most of the surrounding area around Rekyjavik is a craggy landscape of moss-coated lava, jagged peaks and wide valleys. It’s eerily beautiful yet feels fiercely inhospitable at the same time.

The capital’s population extends to a mere 125,000 with another 230,000 in ‘outer’ Rekyjavik and the rest around coast making a total 370,000. It’s the only place in the world where Icelandic is spoken. As a result, everyone speaks immaculate English.

They’re extremely relaxed people and that has nothing to do with the weather which tends to change every hour. One constant at this time of year is the 24/7 light.

It makes it the perfect time to visit where you can really cram as much as possible into a long weekend. Rekyjavik is a charming town of coloured buildings, narrow streets and pretty flower pots bursting with summer blooms outside shops.

Its most prominent landmark, the very distinctive Hallgrímskirkja church with its stepped concrete facade is where every tourist makes a beeline for before they wander off down the main thoroughfare Laugavegur lined in restaurants, bars and shops selling hiking gear and fluffy puffin toys.

Turn back the clock and delve into Rekyjavik’s past at the beautifully laid out living Arbaer Open Air Museum. Thirty historical houses have been relocated from downtown Reykjavik onto a farm on the outskirts of town.

It offers a realistic depiction of life in the 19 and 20th centuries. The attention to detail is extraordinary. Staff wear period costumes, the ticket office was a house built in 1901 and sells vintage toys, sweets and products from the era.

You’ll wander in and out of the properties dotted around the ‘town square’ including a selection of houses once belonging to farmers, the wealthy even an old workshop with original tools and an old Ford.

Iceland’s traditional turf-roof houses are dotted on outlaying hills near a tiny church also covered in turf. A favourite was a hut used by boy scouts in 1920, complete with bunks, sledges and drying undergarments.

After all this activity, chilling out is seriously required and Iceland is just the place to do that. While the Blue Lagoon – with large pools of geothermal waters that heal just about anything – is firmly on the tourist trail, a brand new experience, the Sky Lagoon, is taking floating in steaming pools to a whole new other-worldly experience.

Its design resembles a volcanic cave from which you emerge into a steaming pool dotted with gigantic volcanic boulders. Its infinity edge gives the illusion of merging into the North Atlantic at the edge of the world.

What a finale to a short break to the land of Fire of Ice.

PLAY offers flights from Stansted to Iceland four times a week from £30 one way. flyplay.com

Botswana’s Okavango. No blues in this Delta ·

Center Parcs Ireland Review: Everything you need to know about Longford Forest