A few short years ago, the thought of getting around Los Angeles without a car seemed as impossible as making a superhero movie with a female lead. But this is 2018, and times are changing.

LA County voted recently to give Metro, the transit authority, £90bn over the next 40 years to build a modern public transport system. This hefty investment, along with the rise of cab apps such as Uber and Lyft, bike share schemes and the new-found willingness of locals to find other ways to travel, is nothing short of miraculous.

It’s particularly great news for tourists; aside from the traffic, car hire and parking can be pricey. Get creative with your transport and it’s a different story. Here’s how to get around without getting behind the wheel.

More than anywhere else in Los Angeles, Santa Monica has embraced cycling culture. There are Metro Bike Share and Breeze Bike share racks everywhere, which run on the same premise as London’s Santander Cycles – hire, use and park. Prices start at around $3 (£2.20) for 30 minutes or $7 for the day. You can also hire a bike from the Santa Monica Bike Centre; prices start at $20 for two hours. 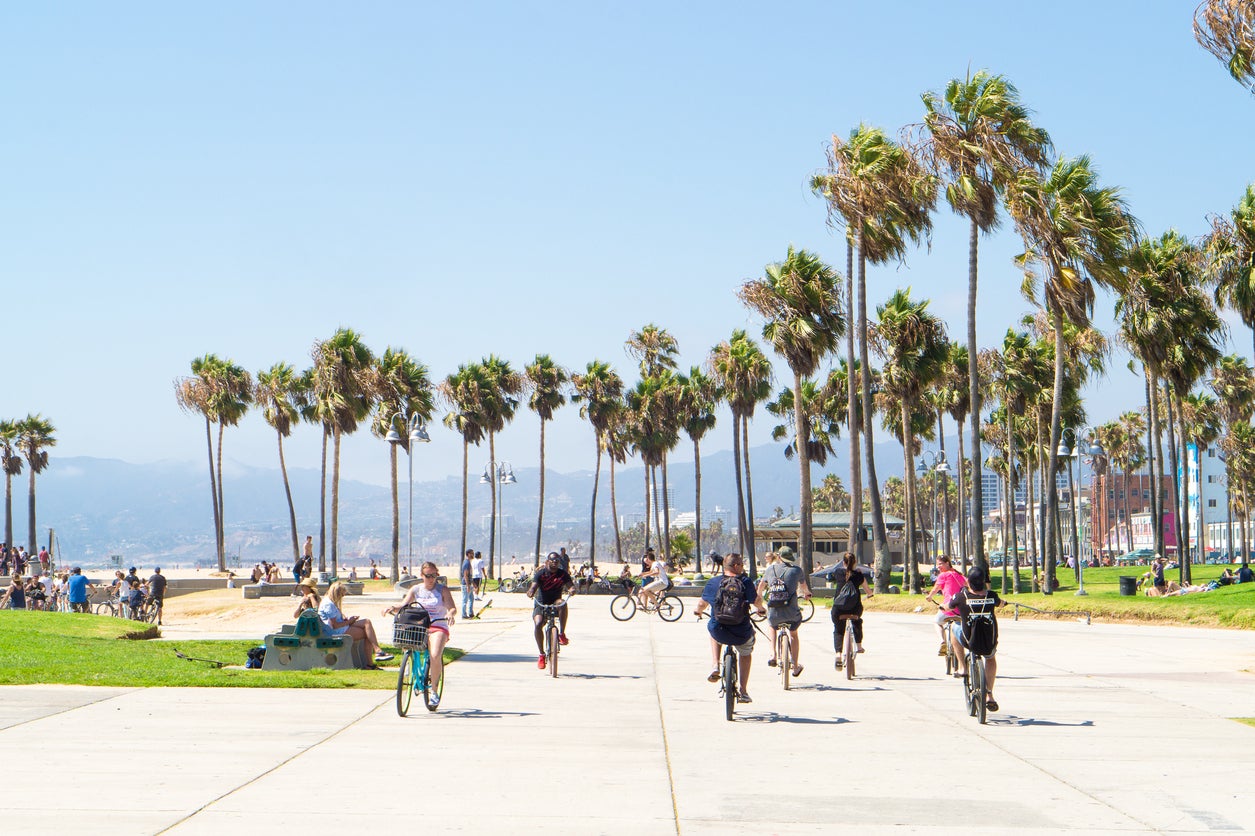 If you’re biking on a Sunday, the lively Santa Monica Farmers’ Market on Main Street even offers free valet.

Cycle to the Back On The Beach oceanside café in Santa Monica, where you can bury your toes into the sand as you sip on Arnold Palmers and tuck into juicy burgers.

The city’s ever-expanding train network is a game changer. The Metro’s Expo Line extension, which opened 18 months ago, runs diagonally across the centre of LA, starting at 4th Street and Colorado Avenue in Santa Monica, ending downtown at 7th Street in the financial district.

If you plan to use the Metro more than once invest a dollar in a TAP card, which loads up like an Oyster card. They’re not essential (single journeys are $1.75 or $7 for a day travelcard) but come with various discounts. 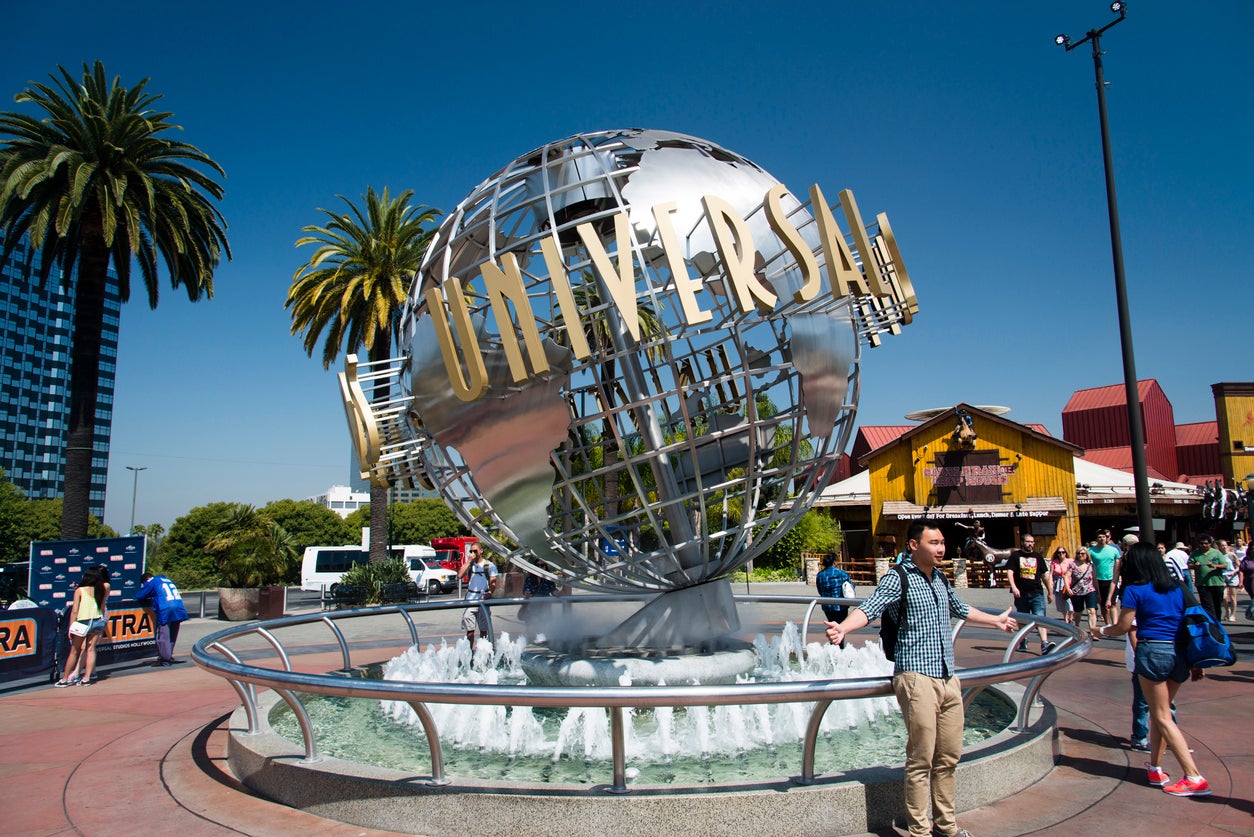 From 7th Street you can also get a train to Union Station (to connect to Amtrak trains), Long Beach and also Universal Studios in north Hollywood. Take the Expo to 7th Street, hop onto the Red Line which takes you to Universal Station; from there the theme park’s shuttle service runs every 20 minutes.

Walk 10 minutes from 7th Street station to Cole’s Saloon, which opened in 1908 and is the home of the original French Dip Sandwich (thinly sliced hot beef in a soft roll, dipped in gravy). Pair it with their exceptional potato salad and signature Old Fashioned.

One of the reasons a car-free holiday is less painful these days is the rise of cab apps such as Uber and Lyft. My average journey cost $7; even if you’re not a fan, download the apps to use in LA for cheaper, easier travel. 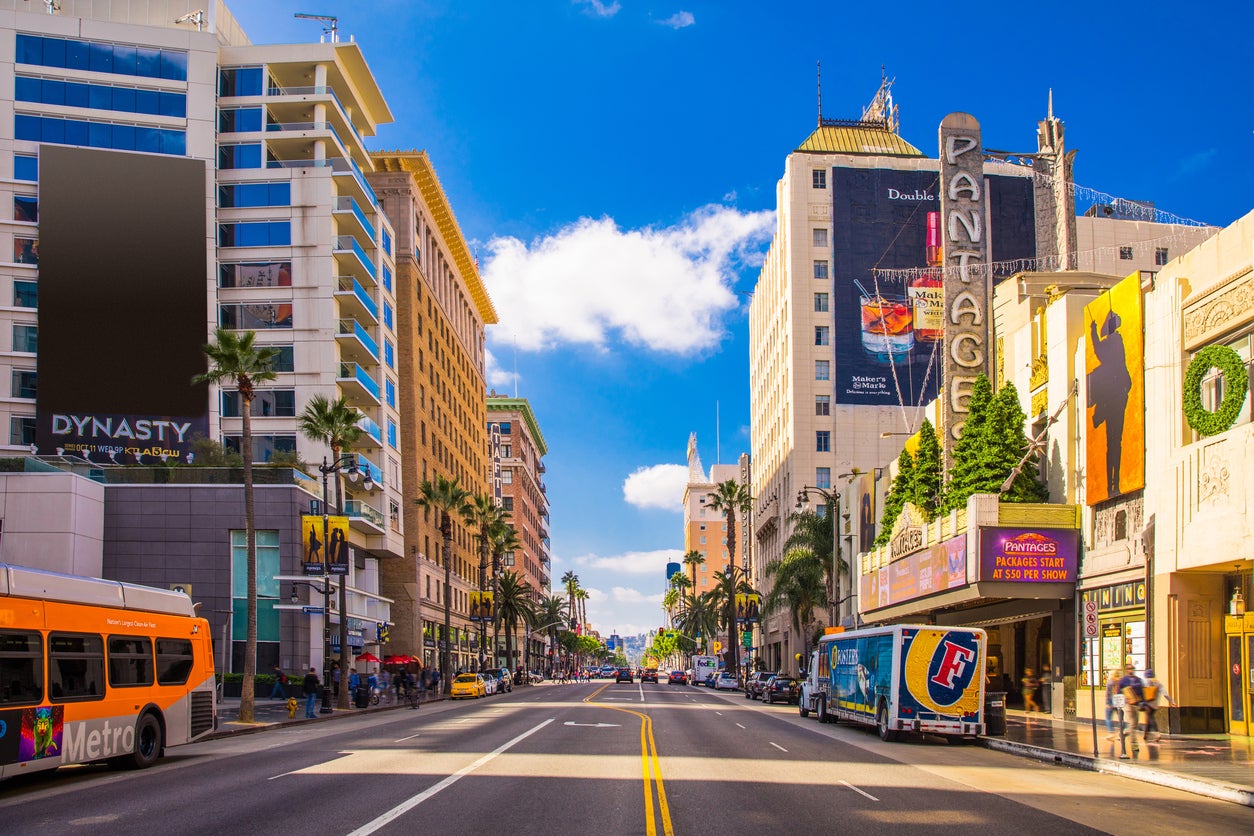 Of course, you can also do the unthinkable and actually walk; WeHo (West Hollywood) is eminently strollable. Downloading the Map My Walk app, I charted a five-mile amble one afternoon along Sunset Boulevard past the Chateau Marmont, Comedy Store, Whiskey-a-Go-Go, Rainbow Bar and Grill and The Roxy ending up at the Sunset Plaza, which has bistros, designer boutiques and a handy Chinese hot foot massage spa.

Relax at one of the more intriguing restaurants in WeHo. E.P. and L.P. Eating House and Rooftop Bar is a modern Asian restaurant – its curries are a salty, sweet and sour flavour explosion, and the cocktail menu is extensive.

The Metro Red Line runs between North Hollywood and Union Station, and all life is here, from the dreadlocked breakdancer to the nurse I saw power-walking around the platform.

I jumped on the Red Line from Hollywood and Highland station to Sunset and Vermont. Ten minutes later I was alighting to catch the DASH shuttle bus. It wends its way through trendy Los Feliz up Mount Hollywood to the Griffith Observatory, which features in movies La La Land and Rebel Without A Cause. It also stops at the Greek Theatre. 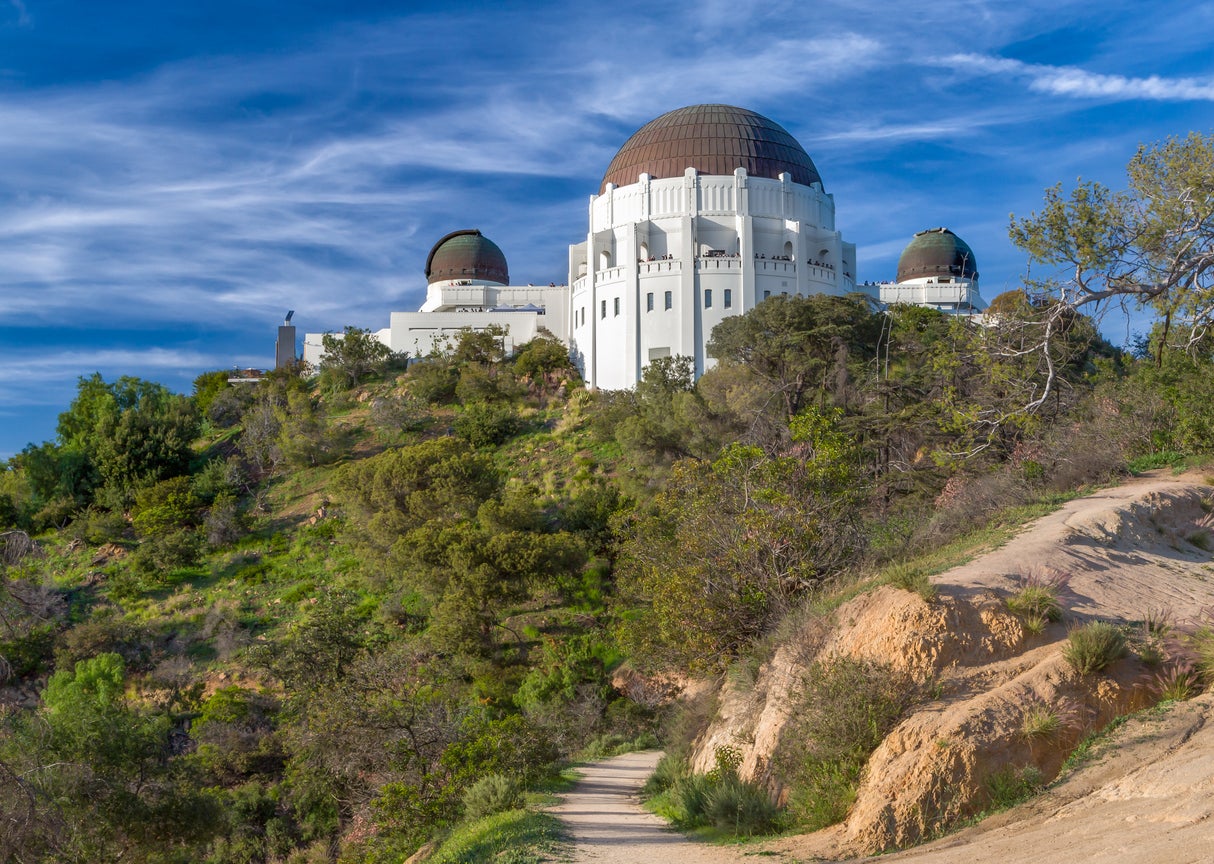 The shuttle takes just 25 minutes to reach the observatory and is fantastically cheap: 50 cents (37p) per journey or 35 cents (26p) if you have a Tap card.

Make for the Alcove Cafe & Bakery on Hillhurst Avenue in Los Feliz for iced tea, a classic Cobb salad and a glimpse of famous locals, from Jon Hamm to Kristen Stewart.

The LA Metro bus service is quite possibly the Marmite of Los Angeles. I have friends in the city who use it daily and others who look completely baffled when I mention the city even has a bus service.

Pick your routes wisely. On the recommendation of a Metro-loving local I decided to take the bus ($7 return) from West Hollywood to the Getty Villa, a Roman-style home where some 44,000 antiquities from J P Getty Museum’s collection live. Hop on a number 2 bus, which runs the length of Sunset Boulevard, and relax all the way down towards the Pacific Coast Highway before alighting at the Will Rogers State Beach. From here you’ll need to get on another bus – the 534 – for the last mile to the Getty Villa. 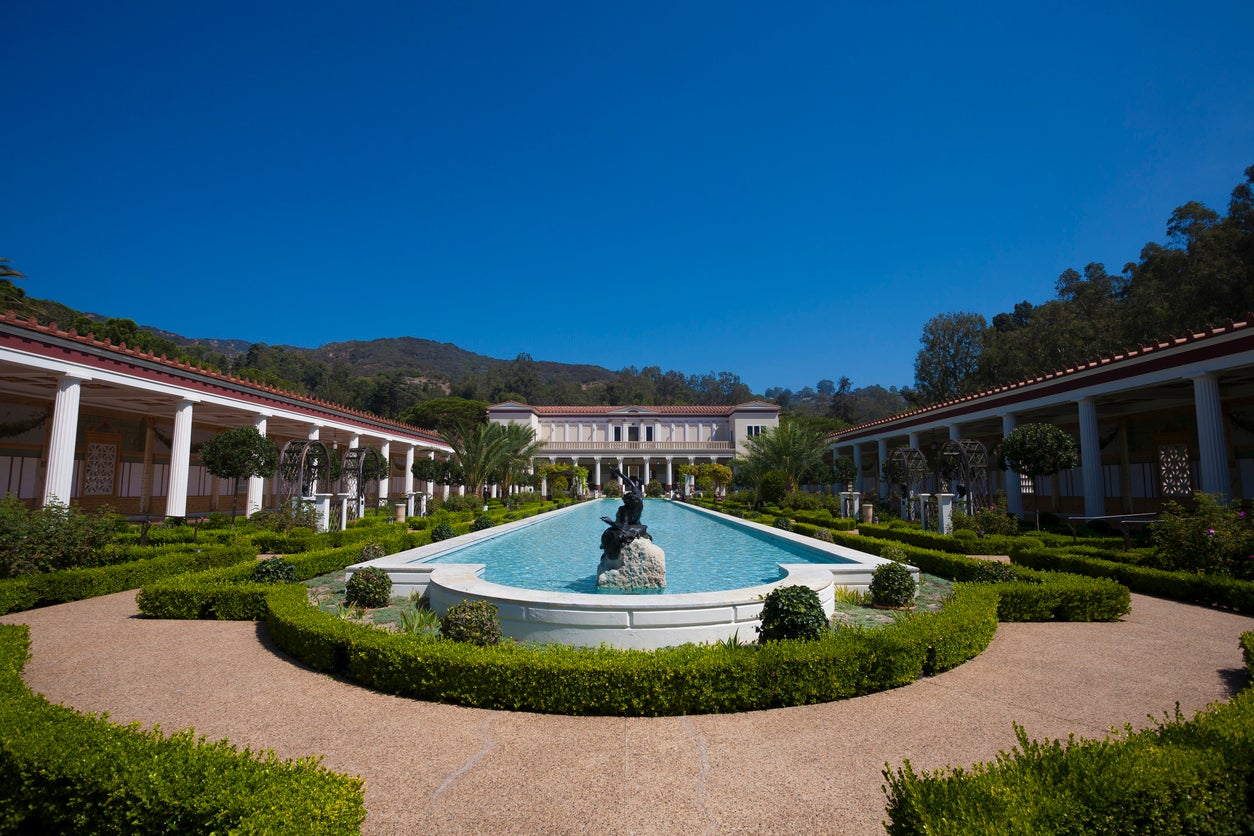 After a day on the buses relax at Gracias Madre, a plant-based Mexican restaurant in WeHo. Who knew that crab cakes made from hearts of palm or jackfruit tacos would be so delicious? Go the full legal high by ordering their Sour T-iesel cannabis cocktail made from CBD hemp oil, tequila and lime juice.

You can’t go to Los Angeles without visiting the Hollywood sign. Built in 1923 by London-born artist Thomas Fisk Goff to advertise real estate, it’s probably the most recognised logo in the world.

I booked a Hollywood Sign eBike Cruise with LA Fly Rides to get up close and personal with it. Electric bikes use a battery to supply power to the motor, which is very small and quiet. You still have to pedal, but fix the controls to turbo and it’s as if an invisible force is pushing you up through the Hollywood Hills. A two and a half hour tour costs £70. 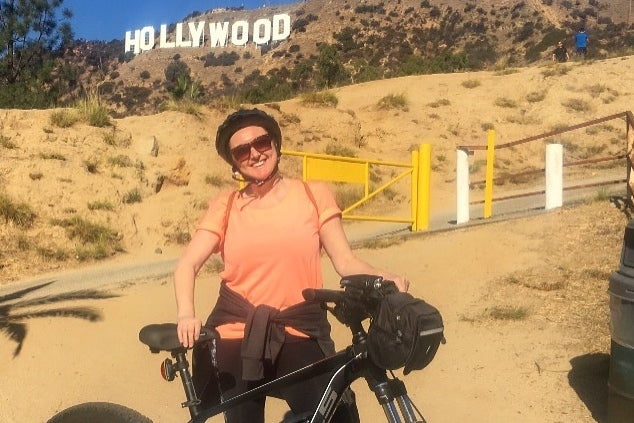 After a turbo charged e-bike ride head to Harlowe on Santa Monica Boulevard, which is fast making a name for itself as the best Sunday brunch location in town. Grab a table on the patio and order the brisket and one of their exceptional Bloody Marys.

The Shangri-La Hotel looks like a cruise liner and has a Roaring Twenties appeal. Undergoing a refit to include a modern spa, this boutique hotel also features a rooftop bar, restaurant and solar powered swimming pool complete with full bar. Doubles from $279, room only.

Sunset Tower Hotel is an art-deco landmark and rich in Hollywood history (John Wayne, Clark Gable and Howard Hughes used to live there). Doubles from $395, room only.