Named for its location along the southern shore of Santa Monica Bay, Los Angeles’ South Bay region is quintessential California replete with miles of picturesque beaches, jaw-dropping beachfront mansions and men in board shorts and flip flops at nearly every turn.

South Bay’s sophisticated beachfront communities are also filled with trendy boutique shopping, as well as the sort of stylish, upscale dining options one would expect when visiting a cosmopolitan destination inhabited by a fair share of movie stars and the otherwise well-heeled and stylishly dressed who tool around in the latest Mercedes, Porsche Cayenne or BMW.

The region is the embodiment of the So Cal lifestyle that the rest of America imagines when thinking of the Golden State (or Baywatch.)

Tucked into this same sun-drenched, bikini-clad region is the tiny community of El Segundo. Spread over just over five square miles, El Segundo offers another take on So Cal life, one whose history is dominated by the presence of a sprawling Standard Oil refinery that was built in 1911.

In addition to being a refinery town, El Segundo hosts a major aerospace industry presence and in more recent years has become a high-tech hub with such well-known names as WeWork and TripAdvisor having local addresses.

It is here, in El Segundo, a stone’s throw from Los Angeles International Airport, that Marriott recently launched one of its latest projects – the brand-new AC Hotel Los Angeles South Bay.

The sleek, stylish hotel is located on a quiet street in the thicket of El Segundo’s industrial heart. From guest room windows you can spy the newly opened Los Angeles Times headquarters, the Moose Toys complex is next door and Mattel, the toy giant, is just a few blocks away.

A surprising location choice at first blush, it would be a mistake to underestimate this new property or its potential.

It is after all, hardly more than one mile from Los Angeles International Airport, as well as from glitzy Manhattan Beach, and a plethora of eating, shopping and recreation options, all of which provides the AC Hotel Los Angeles South Bay with the unique value proposition of being something far more than a place to sleep during an airport layover.

Rather, it is a property where you can bridge both worlds – being conveniently located to LAX while also providing immediate access to all that Southern California (and El Segundo) have to offer.

“We are surrounded by the largest aerospace hub in California, as well as the defense industry, and the Los Angeles Times,” begins the property’s general manager, Ahmed Elassy. “The Los Angeles Lakers are on the same block, as well as the LA Kings and the second-highest concentration of Fortune 500 is located within a five-mile square radius, and we offer close proximity to the beach.”

The hotel itself is designed with contemporary flair and European sensibilities, as the AC brand has long been known for. That means clean, minimalist interior design and guest room décor as well as breakfasts from AC Kitchen featuring Spanish tapas, croissants flown in from France and Italian coffees.

There’s also AC Lounge, a lobby bar and gathering space that provides a place for guests to work in the morning and mingle at night. The lounge offers power lunches on its patio and handcrafted cocktails and tapas after dark. 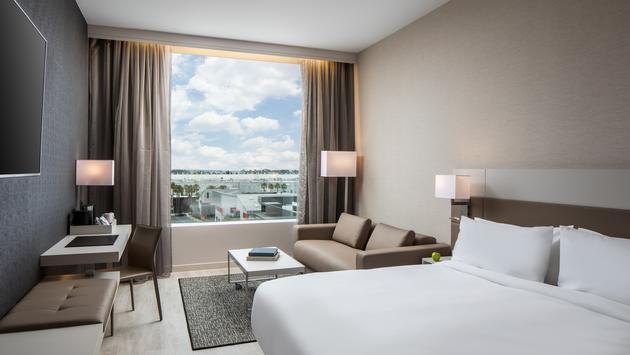 The property’s rooftop offering, meanwhile, Flora, is a one of a kind in its industrial neighborhood, a lush and inviting open-air space that includes a vibrant living wall and an expansive garden filled with a fascinating array of well-tended vegetables, herbs and flowers, many of which are used to make sauces, and garnishes for foods and drinks.

Though such swank rooftop spaces are common in downtown Los Angeles, in El Segundo, they have yet to become commonplace.

“We are obviously in an area that, while we are close to the beach, is still very industrial in the sense that there’s a lot of manufacturing and industrial-type businesses around us, as well as aerospace stuff, Tesla and we’re not too far from the Chevron plant. It’s still very industrial,” explained Hector Martinez, director of sales and marketing. “So, what we wanted to do even being located amid all these things, was to still flip this on its head, and create a space that maybe you would find in the middle of Hollywood.”

To this, Elassy, the hotel’s manager, adds that the creation of the rooftop restaurant and bar was a very conscious business and design decision, based on a desire to incorporate an inviting, outdoor gathering space rather than an on-site pool that might not get much use.

“Five days a week guests are coming here to enjoy this rooftop space and very rarely would someone come in to use the pool,” said Elassy. 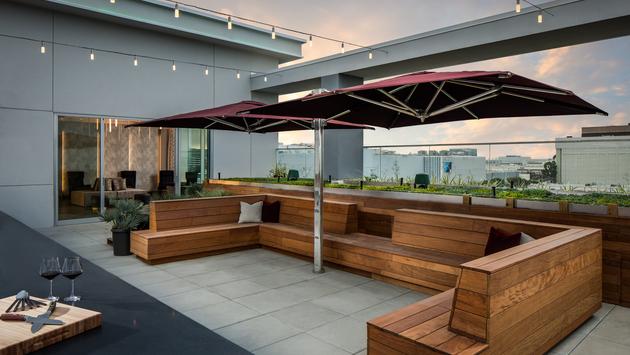 For guests who take the time to explore beyond the hotel property, El Segundo is far more than just a refinery and high-tech town, though those elements are certainly a big part of its past and present.

The community also has a small, walkable downtown core that’s a surprising slice of Americana circa 1950 thanks in large part to its Mayberry-like Main Street.

While exploring this community, don’t miss the farmer’s market held on Main Street every Thursday from 3 p.m. until 7 p.m. or stopping in at Sausal for a memorable bite of nuevo rancho cuisine (hint: be sure to try the caramelized onion empanadas and the al la carte tacos).

For yet another step back in time, take in a silent movie at El Segundo’s Old Town Music Hall, a treasured cultural landmark in the community that provides a unique window into Hollywood’s earliest days.

Since 1968, the tiny theater has been showing vintage, silent (and sound) movies. The silent films are accompanied by the Mighty Wurlitzer, a massive, 1925 wind-powered pipe organ that allows for viewing silent classics just as they were first shown.

All of these varied elements combine to create an engaging and colorful juxtaposition and a refreshingly unexpected Los Angeles getaway – the ultra-modern AC Hotel Los Angeles South Bay with its European flair; El Segundo’s quaint downtown; and for those in search of sand and sun, the Baywatch version of Southern California that long ago made the region famous, that’s within reach as well.

Hollywood of the south: Atlanta’s film industry got so big it built its own neighborhood

Northern Rail to be renationalised