Paris: so much to see, do eat, shop, admire and ogle, so why bother splurging on an expensive bed for the night when you’re hardly going to be there? But before you go roughing it, remember that Paris demands a certain level of style – it’s the home of fashion, romance and fine cuisine, after all. Enter, then, a host of fantastic hotels, hostels and even a campsite where it’s possible to find a chic abode for less than €100 a night, while the newly opened Hoxton Paris provides tough competition with its 172 rooms, three bars and an excellent restaurant. 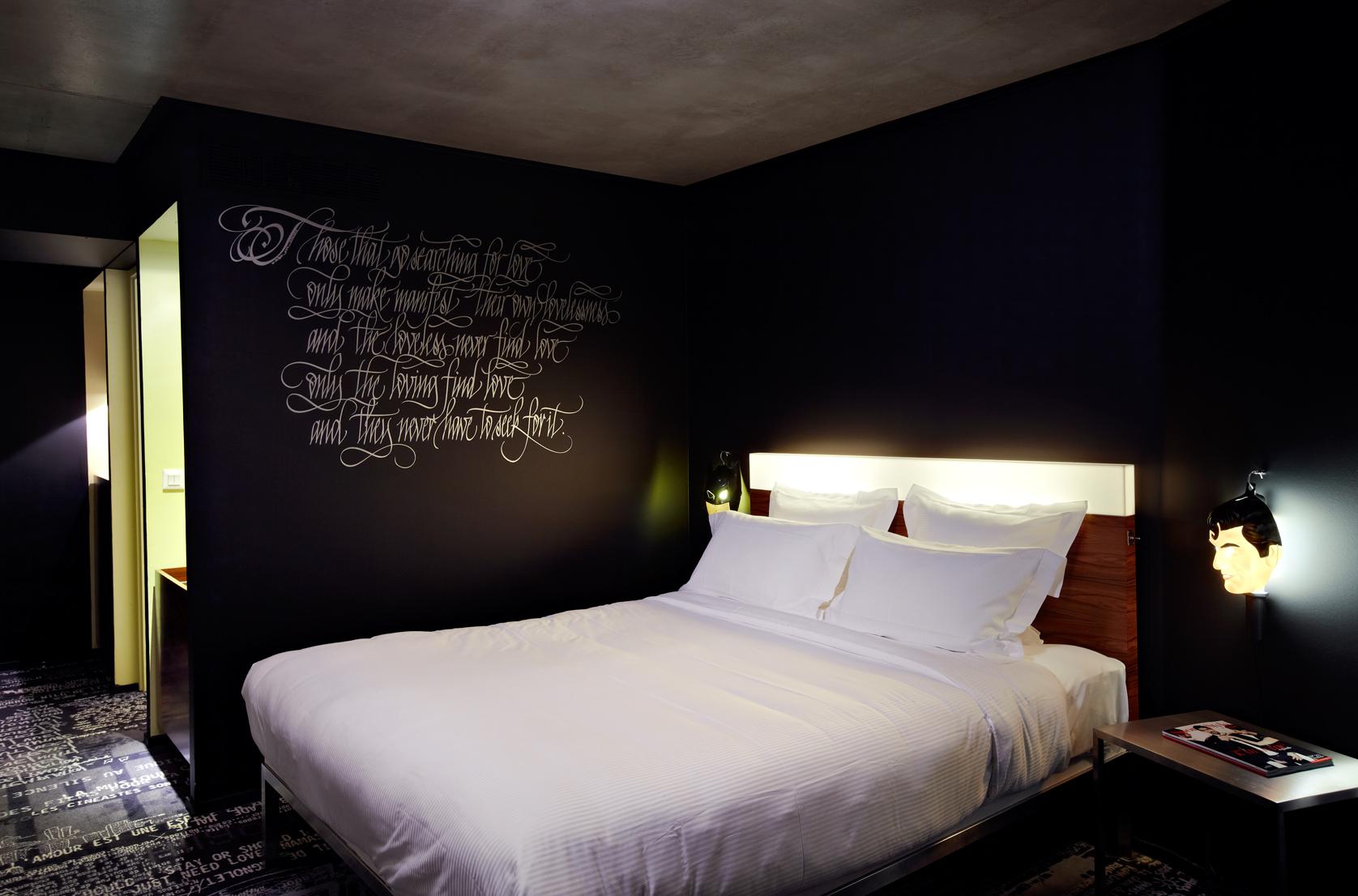 Mama Shelter started the trend for design on a budget when it opened in 2009. Having extended across France and beyond in the past decade, with hotels in Rio, Los Angeles and Belgrade, its style-on-a-budget brand has gained fans worldwide. Their Paris hotel, close to the Père Lachaise cemetery and the hip Belleville district, is the original and was designed by Philippe Starck.

The top French designer’s quirky vibe runs throughout the 172 bedrooms, which are small and cocoon-like with black and grey decor, as well as the laidback restaurant, which offers a number of dishes from Michelin-star chef Guy Savoy.

Doubles from €79, room only
mamashelter.com

Best for hanging out: Hoxton Paris 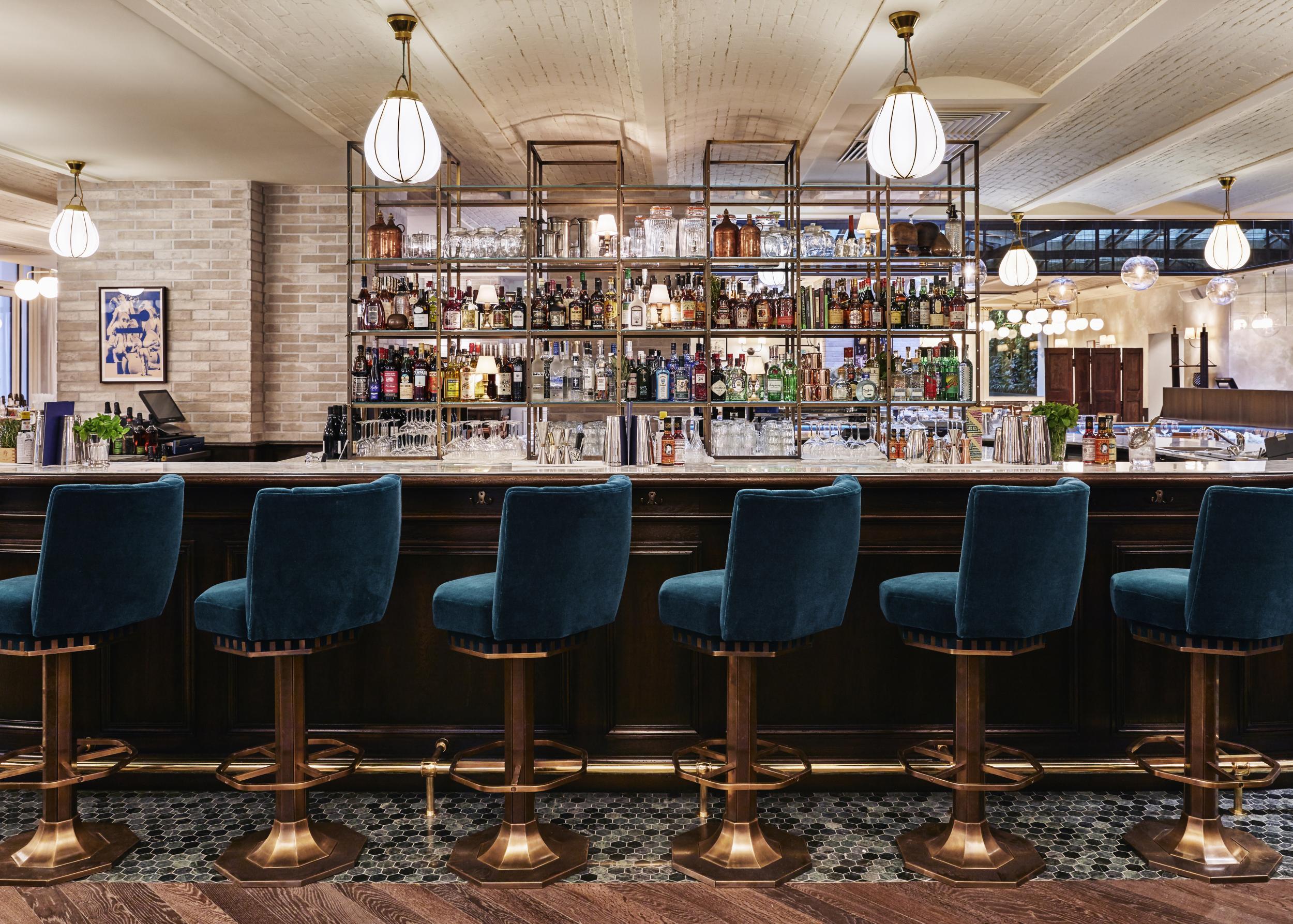 Following on from its success in London, the Hoxton opened in Paris in the summer of 2017 and has quickly become the place to see and be seen, whether staying in the hotel, sipping cocktails in one of its bars or dining in its restaurant. While its size – the 172 rooms are set on long corridors over four floors – can feel a little impersonal at times, the personal touch comes from the friendly staff, while the cosy florals and velvets with full-height windows and Moroccan-inspired cocktails in Jacques Bar make it a destination in itself. Rooms are thoughtfully designed with leather headboards, herringbone fabrics and parquet floors. 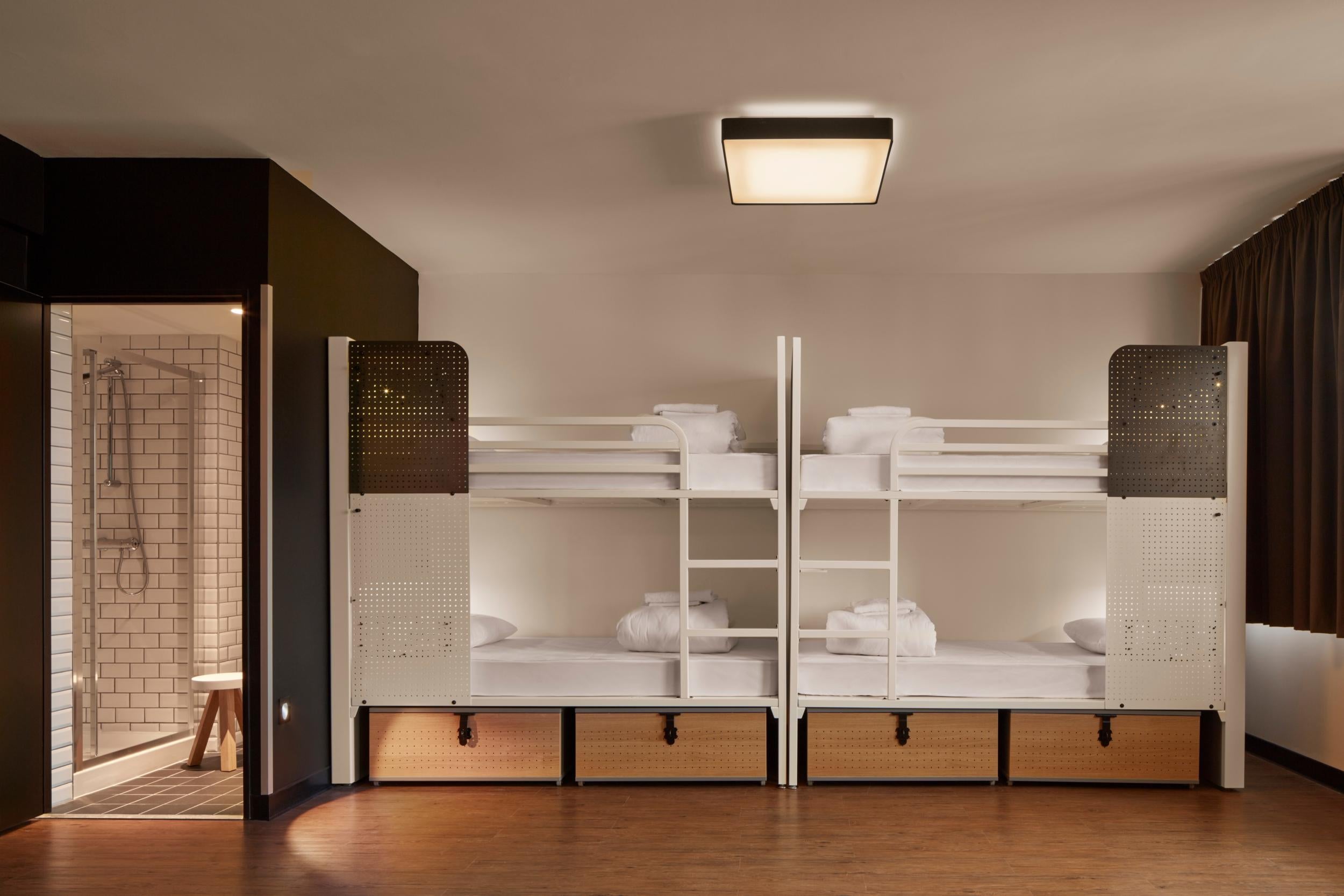 Time was, the word hostel was a byword for skanky showers, uncomfortable bunks and snoring room rates, but with the new breed of cool hostels from the Generator chain – found throughout Europe – you can expect a fantastic rooftop bar with views towards the Sacré-Coeur, a cool brasserie, free wi-fi and the cool Canal Saint-Martin district on the doorstep. Of course they can’t guarantee a lack of snoring room mates, but that’s where the private rooms come in, with twin or quad beds.

Dorm beds from €17, private twin rooms from €78, room only (breakfast from €2)
generatorhostels.com​ 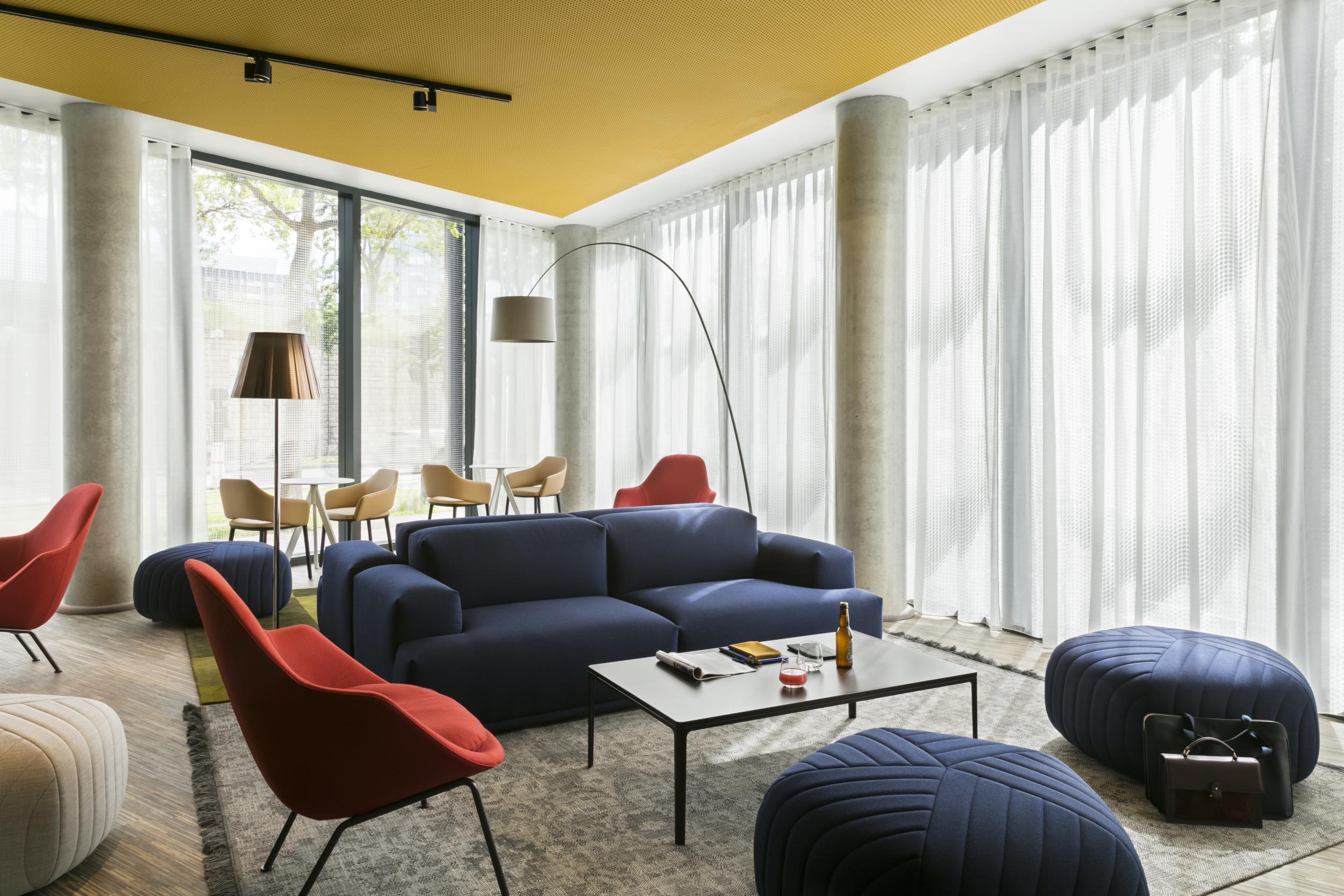 This relatively new chain of four-star hotels is springing up in cities across France. With its cool concept of smallish rooms balanced with a large central area known as The Club, there’s plenty of space to relax. One of their main attractions is that the room price has no hidden extras and includes breakfast, an aperitif, snacks, wifi, international phone calls (up to €10), videos on demand and access to the fitness suite.

For all the pros, however, there is a con – distance from the main sights. The Porte de Versailles hotel is a half-hour train ride from the Eiffel Tower; while their Rueil Malmaison is even further out. A third Paris hotel, at the more central Montparnasse, is due to open in 2019. 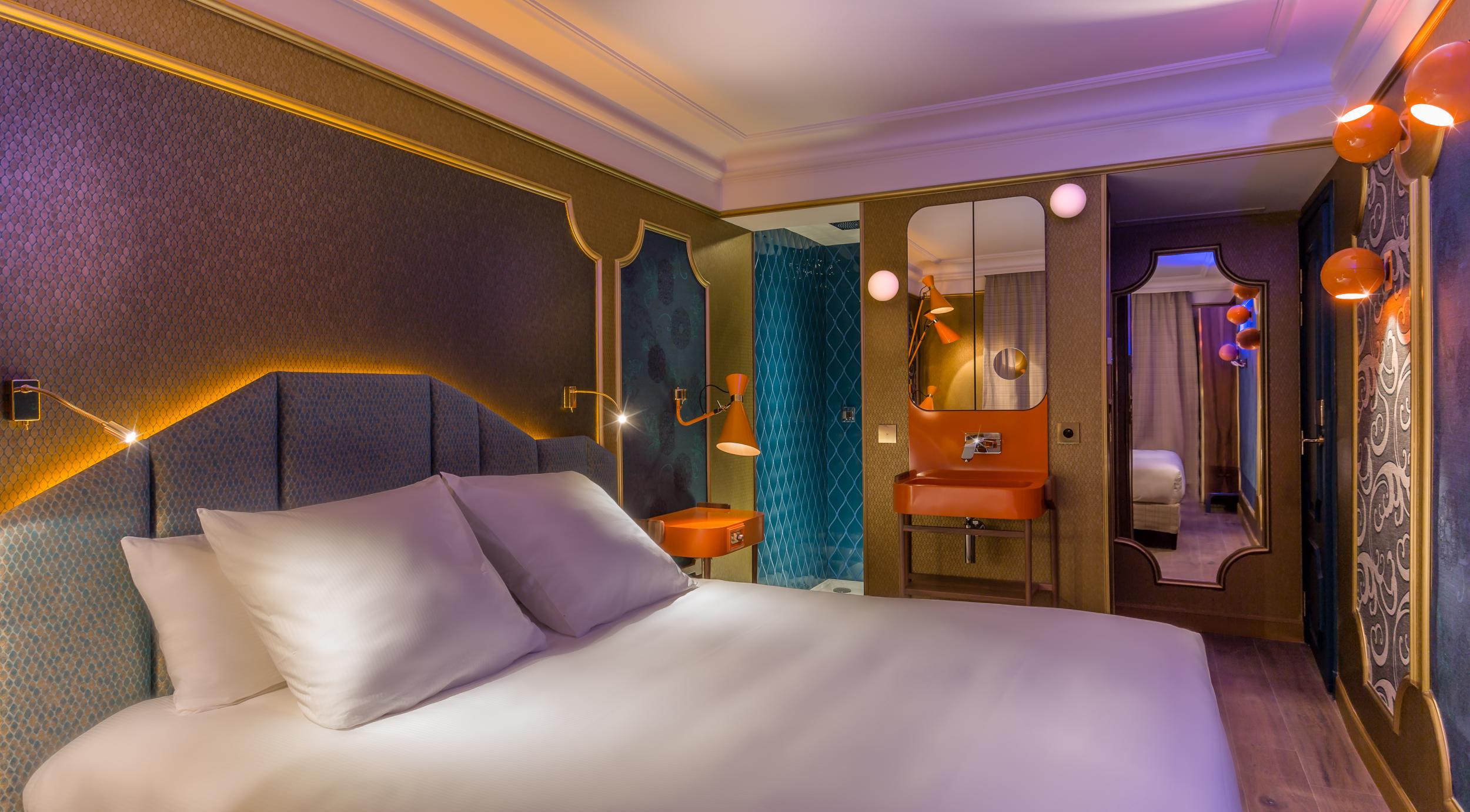 Get your groove on before you check into this disco-themed hotel, where the rooms are named after classic tunes such as “Ma Cherie Amour”, “Light My Fire” and “Lady Soul”.

Decor is loud, shamelessly bold and wonderfully kitsch – you might never have seen this much gold (in a good way, though) unless you’ve stayed in Trump Towers – but it’s all fantastically fun. Music lovers will also appreciate the concierge’s tips on where to find Paris’ best concerts, gigs and clubs.

Best for the planet: Solar Hotel 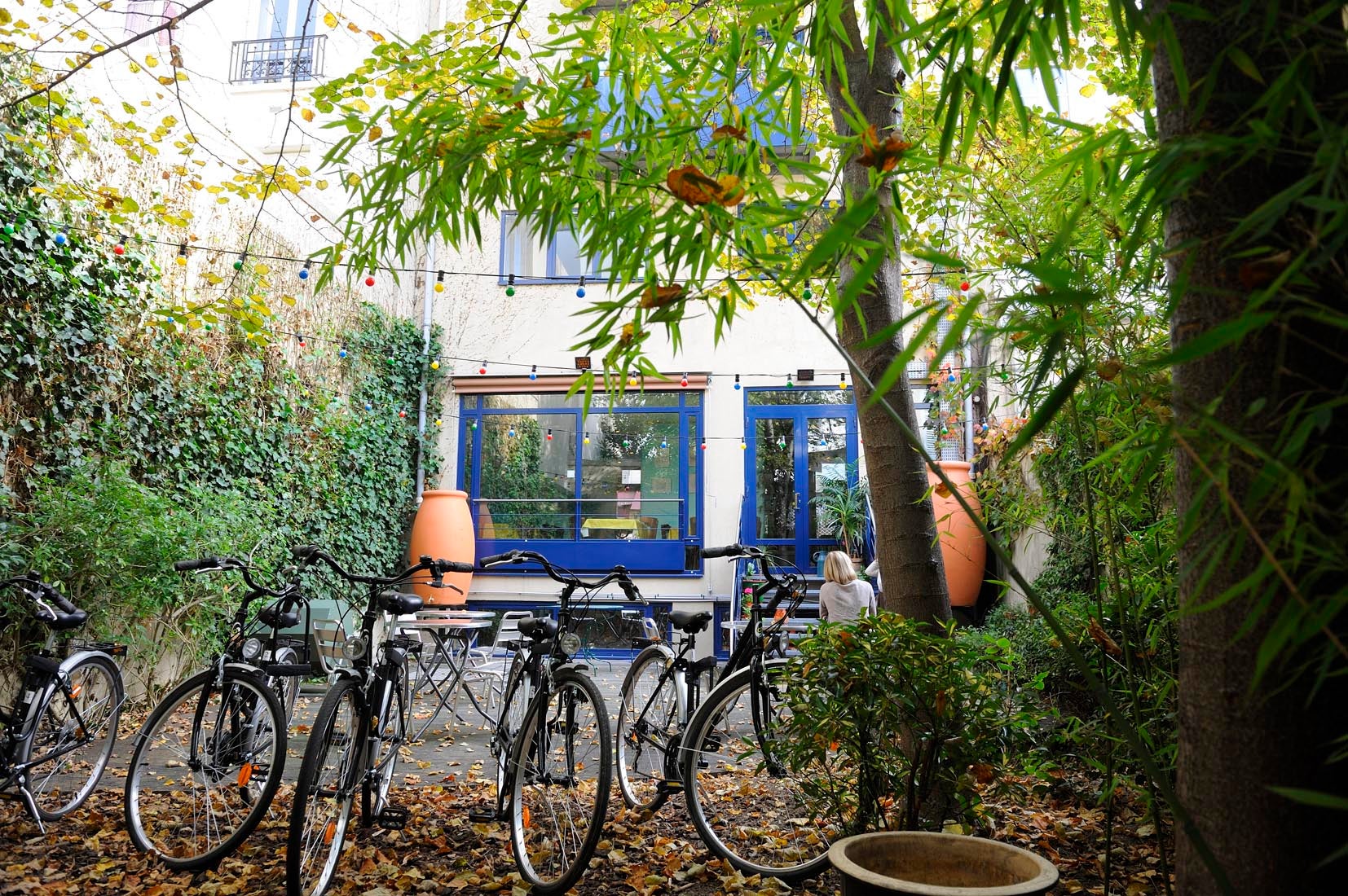 This pricing policy of this eco-friendly budget hotel is dedicated to being transparent, with everything included in the room price and no surprises, keeping the same price all year round. This extends beyond the generous organic breakfast to also include wiifi, phone calls and bicycles to borrow to explore the city.

Rooms are simple with white walls and splashes of colour in the blue curtains and orange headboards; some have balconies overlooking the leafy courtyard garden. Among the hotel’s many ecological initiatives, there are solar panels (of course), energy-saving lightbulbs and waste is sorted for recycling. 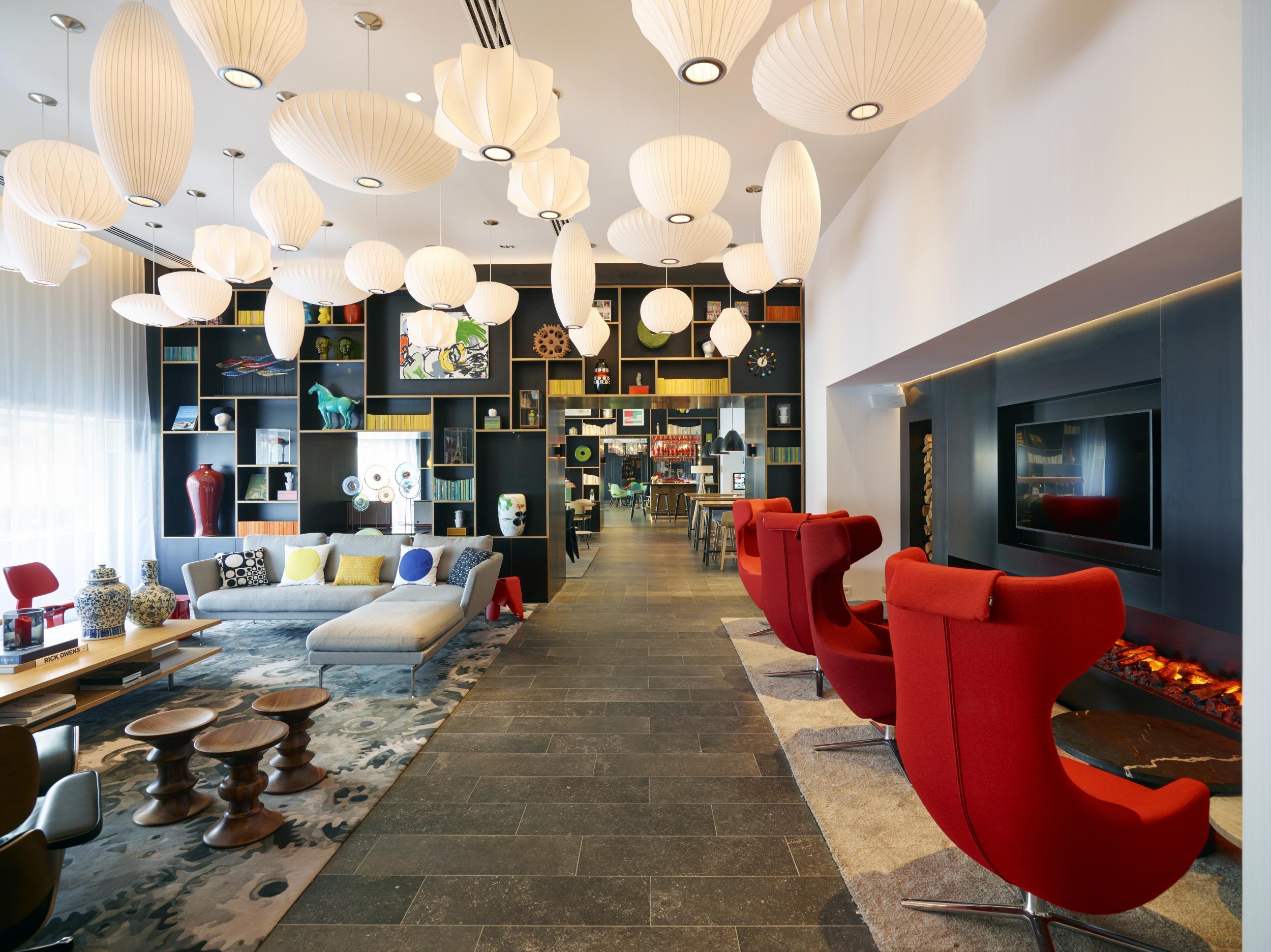 With three different hotels in Paris, the most central being that at the Gare de Lyon (making for an easy onward journey the next day) this international brand of design-led, cost-conscious hotels subscribes to the ethos of stack ’em high, sell ’em cheap; but that doesn’t mean that service, decor and facilities are compromised.

The Gare de Lyon hotel has 338 rooms, with square beds tucked into the end of the room, luxury linen, an in-room power shower and unlimited free movies.

The communal areas offer the space that the rooms lack, with cool decor and plenty of room to sit back with a book or sip a cocktail.

Doubles from €84, room only (breakfast €14.95 if booked in advance)
citizenm.com 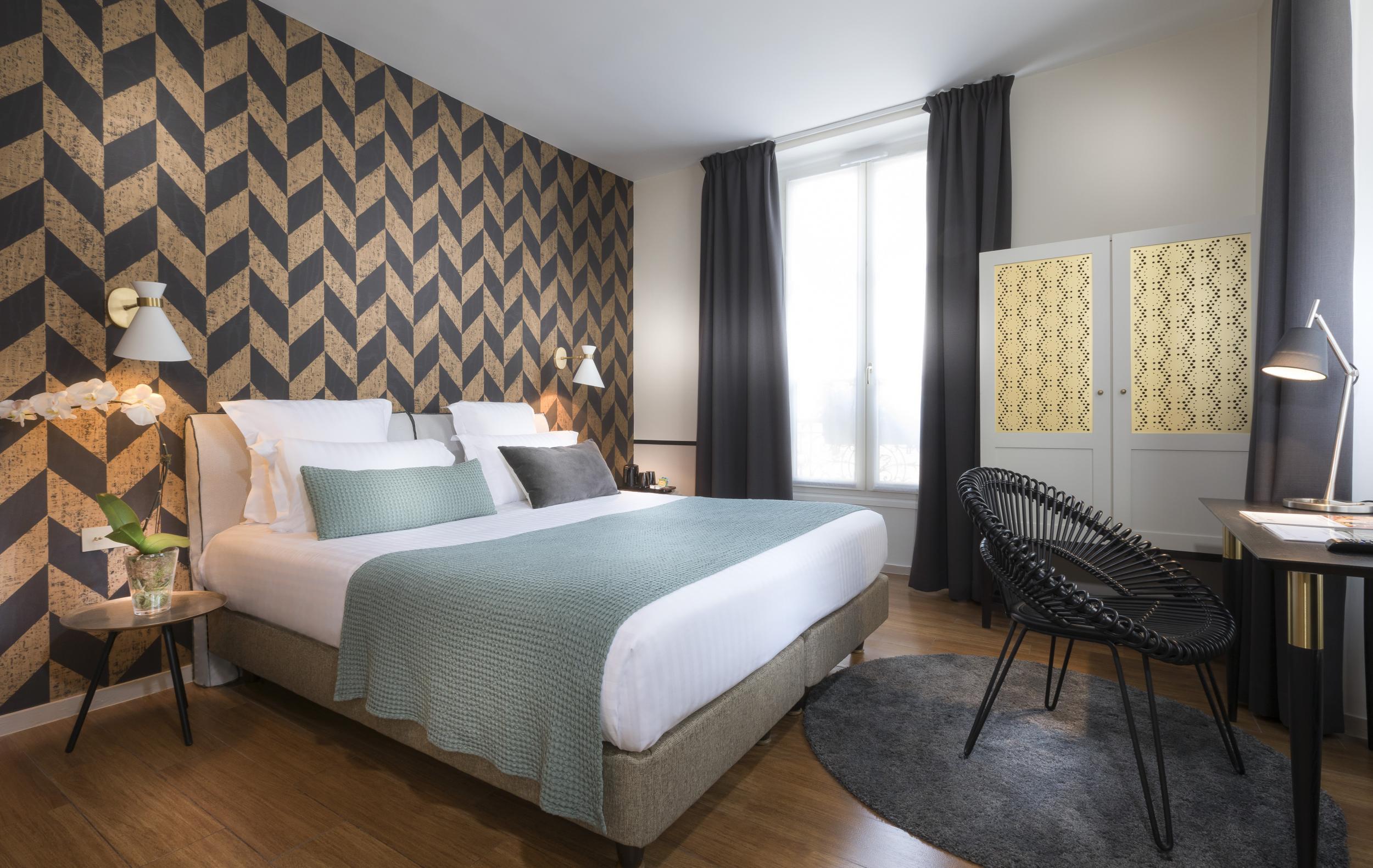 Set in the heart of the Marais, one of Paris’ hippest districts, this three-star hotel was always a favourite with those in the know, but since its recent refurb it is a real gem.

All 34 of its rooms have had a facelift with elegant decor in neutral tones with splashes of muted colour. The new owners have thought of everything with tea and coffee-making facilities in the rooms, a simple but varied breakfast, and free wi-fi. If you can tear yourself away, get out into the area’s trendy bars and restaurants for aperitifs and dinner.

Doubles from €99, room only (breakfast €8)
hoteljeannedarc.com 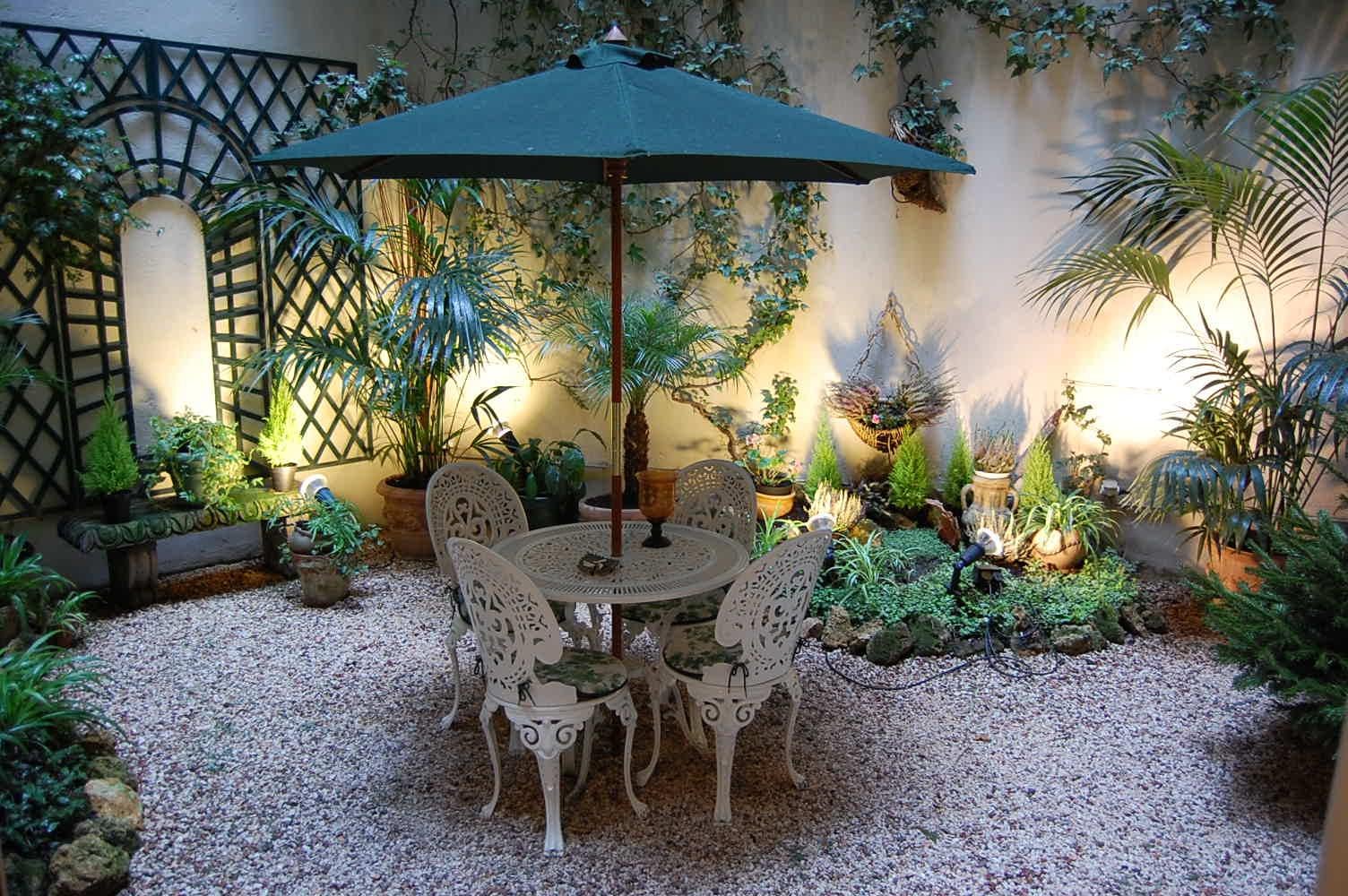 Run by the fourth generation of the same family, this simple but comfortable hotel makes for a great bolthole. It’s situated in the leafy fifth arrondissement, near the Sorbonne and a short stroll from the Jardin des Plantes.

Rooms are dinky and the decor isn’t flash. It’s also worth noting that some of the rooms only have a sink, rather than a full ensuite – shared toilets and showers are on the landing (remember when most hotels were like that?) – but everything is spick and span and staff are friendly.

Doubles from €68, room only (breakfast €8)
port-royal-hotel.fr 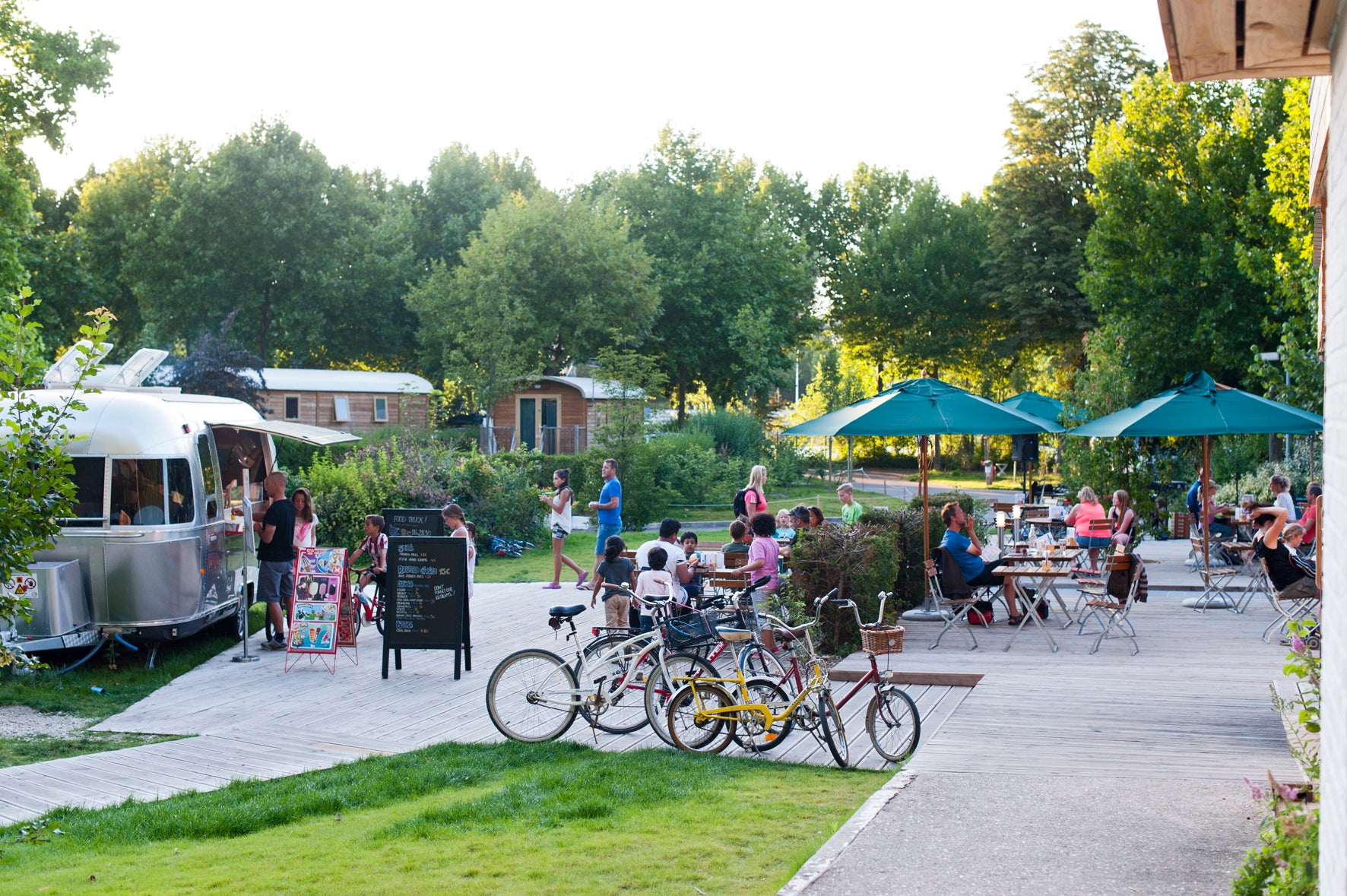 Many of us have fond memories of camping in France as kids, but if the thought of kipping under damp canvas means you’ve consigned it firmly to the past, think again. The French have well and truly embraced glamping, and at Camping de Paris this means comfy beds and wooden floors in the safari-style tents, or kooky gypsy caravans and cosy cabins.

Set at the edge of the Bois de Boulogne, just 20-25 minutes from some of the main sights, the campsite offers a good option for families or those on a budget.

Takeaway meals can be bought from the cool new food truck, which serves pizza and other dishes, while fresh croissants can be delivered to your cabin for breakfast.

Tents for up to four people cost from €78 per night, breakfast from €4.50
campingparis.fr/​

US DOT Issues Second Warning to Airlines Over Refunds

Tips for Wellness During the Pandemic From Goop's Elise Loehnen

Social Distancing With Gorillas in Rwanda

The spectacular palace that 'grows' out of a lofty rock column