Travellers who board cruise ships in the winter months run a far higher risk of contracting a virus than summer passengers.

As the Diamond Princess remains quarantined in Japan because of the coronavirus, The Independent has analysed 118 serious virus outbreaks aboard cruise ships over the past decade.

They are recorded by the US Centers of Disease Control (CDC). Any vessel that visits the US and which has an outbreak of a gastrointestinal illness must report it to the CDC.

The figures cover roughly two out of five of outbreaks worldwide, because most cruises do not include the US. But the figures provide a useful snapshot of the frequency of widespread viruses – at least in the northern hemisphere.

January is the riskiest month to begin a cruise, with 19 outbreaks occurring between 2010 and 2019.

February, with 18 outbreaks, is almost as bad, with March and April also well above average at 15 each.

In each of the remaining months, from May to October, outbreaks are in single figures. 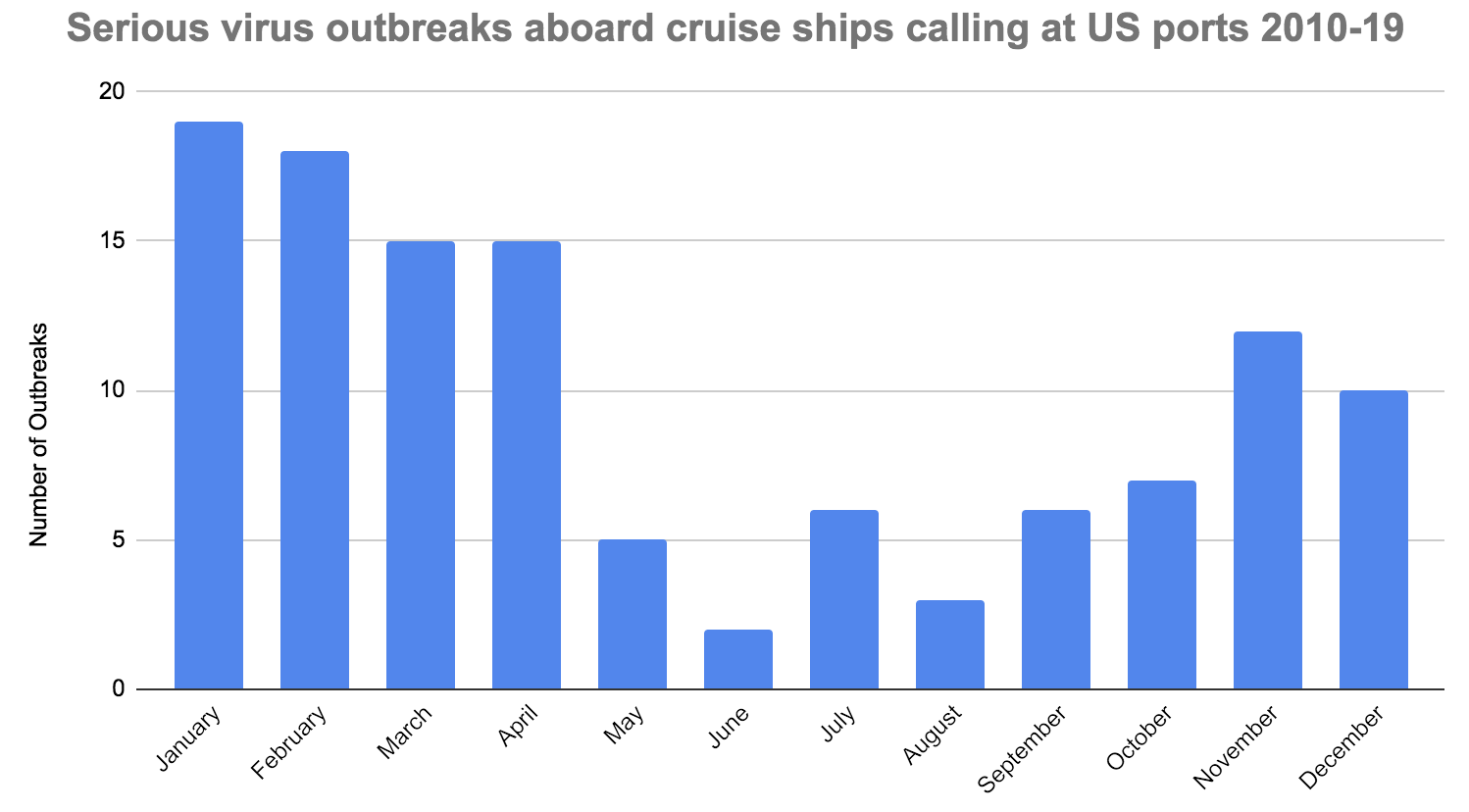 In the decade from 2010, only two serious outbreaks happened in June – both in 2018, and each caused by an unknown virus.

One was aboard Holland America’s Zaandam, afflicting 95 of the 1,472 passengers.

The other took place on Seven Seas Mariner and hit 38 of the 652 passengers.

July’s figure of six outbreaks is skewed by a very bad summer for Holland America in 2017. In July of that year, both the Noordam and the Volendam recorded two outbreaks, with Nieuw Amsterdam suffering a fifth.

August recorded a total of three outbreaks during the decade. Risks increased in September (6) and October (7), but both were below average.

Last year was below the annual average of 11.8 outbreaks with nine. But more than 1,500 passengers on voyages involving the US were infected in serious outbreaks during 2019, with an average of 5.7 per cent of passengers on each stricken cruise ship catching the virus.

The worst-affected voyage, accounting for more than one-third of cases in 2019, was a January departure. It involved one of the world’s biggest cruise ships: Royal Caribbean’s Oasis of the Seas.

She set sail from Port Canaveral in Florida on 6 January 2019, passengers – and 31 of the crew – contracted norovirus, which causes sudden vomiting and diarrhoea. It is also known as the “winter vomiting bug”.

Because of the outbreak passengers were kept aboard when the ship called at Falmouth, Jamaica.

She returned to her home port a day early, and was met by staff working for the CDC’s Vessel Santitation Program. Passengers were given a full refund.

Other large outbreaks in 2019 – with more than 100 passengers infected – were aboard the Island Princess in February, Aida Diva in September and Norwegian Joy in November. The last of these was attributed to an unknown virus; the rest were confirmed as norovirus infections.

The Aida Diva suffered a second outbreak of norovirus in October, affecting 83 passengers.

The first serious outbreak of 2020 has occurred in February aboard a sister ship of the stricken Diamond Princess.

The outbreak, caused by an unknown virus, began to spread two days after setting sail from Fort Lauderdale in Florida on 2 February. Eventually it infected 345 of the 3,035 passengers on board, representing 11.4 per cent.

The ship underwent a three-day deep clean at its home port and is now back in service.

CDC says: “Travelling on cruise ships exposes people to new environments and high volumes of people, including other travellers.

“This exposure can create the risk for illness from contaminated food, or water or, more commonly, through person-to-person contact.”

The organisation advises cruise passengers: “Wash your hands often but especially after using the toilet and before eating or smoking.

“Leave the area if you see someone get sick.”

If the US figures are extrapolated worldwide, they suggest a serious outbreak happens somewhere in the world every two weeks on average.