Home » Travel » Why you should visit historic Munster in Germany

Green light Germany is illuminating: You may not have heard of historic Munster but it’s steeped in culture — and sizzling with sausage

We used to do things better than the Germans. So much so, in fact, that during the Industrial Revolution they sent spies to filch the secrets of our cotton and steel factories. And filch they did.

One Teutonic tycoon, in a moment of mischievous honesty, even named his factory ‘Cromford’ after the Derbyshire mill whose technology he had swiped.

Now, by contrast, whether you’re talking about football or Covid containment, there’s a growing sense that we have more to learn from the Germans than they do from us. 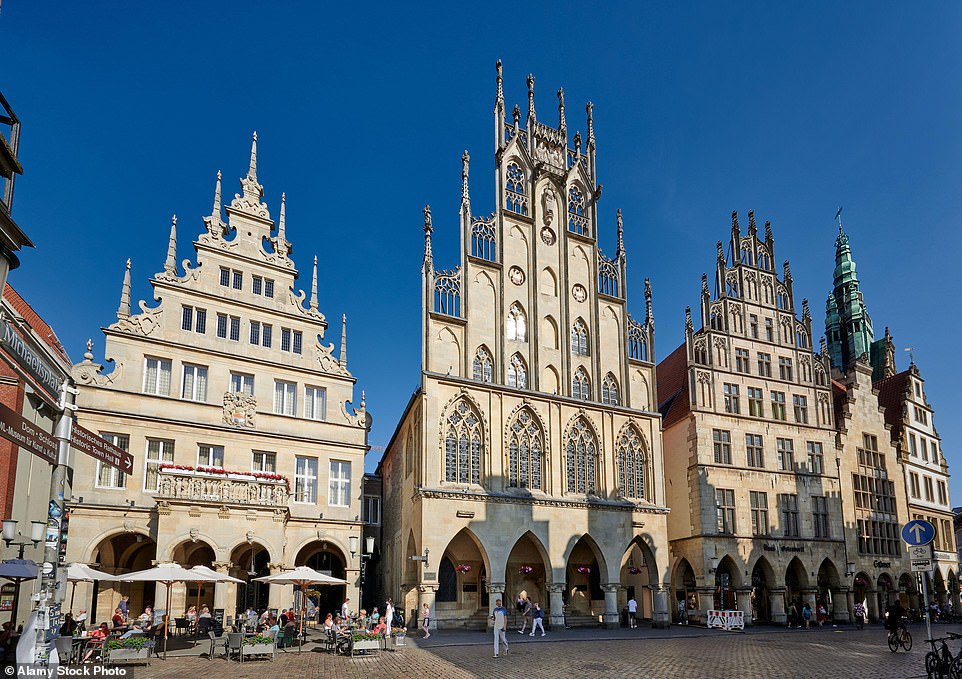 Munster was badly bombed in World War II and it was reconstructed in a combination of old and new styles. Pictured is the marketplace

If you don’t believe me, read John Kampfner’s recent book Why The Germans Do It Better — or follow my lead and visit the country’s lesser-known north-west corner.

If you are familiar with the nightlife of Berlin and highlights of Bavaria, you are ready for the more obscure pleasures of the Ruhr and North Rhine-Westphalia near Dusseldorf. First among them is the Landschaftspark. An old ironworks near Duisburg has been transformed into a visitor attraction with something for everyone. That’s right: the Germans even do industrial heritage better.

There’s a warehouse turned open-air cinema, and a gas storage unit you can scuba-dive in. Concrete walls have become the country’s largest artificial climbing area. You can also scale the blast furnace to a viewing platform. Your Instagram feed will runneth over with shots of mysterious cisterns and photogenic generators, fat slag heaps and squat smoke stacks.

Head north-east for 60 miles and you come to Munster — a medieval town so attractive that in the 16th century the Anabaptists hailed it as ‘the New Jerusalem’. They took it over and practised enthusiastic polygamy while burning all books except the Bible. That was until the ringleaders were caught and tortured to death (tongues torn out, stabbed in the heart, and so on). 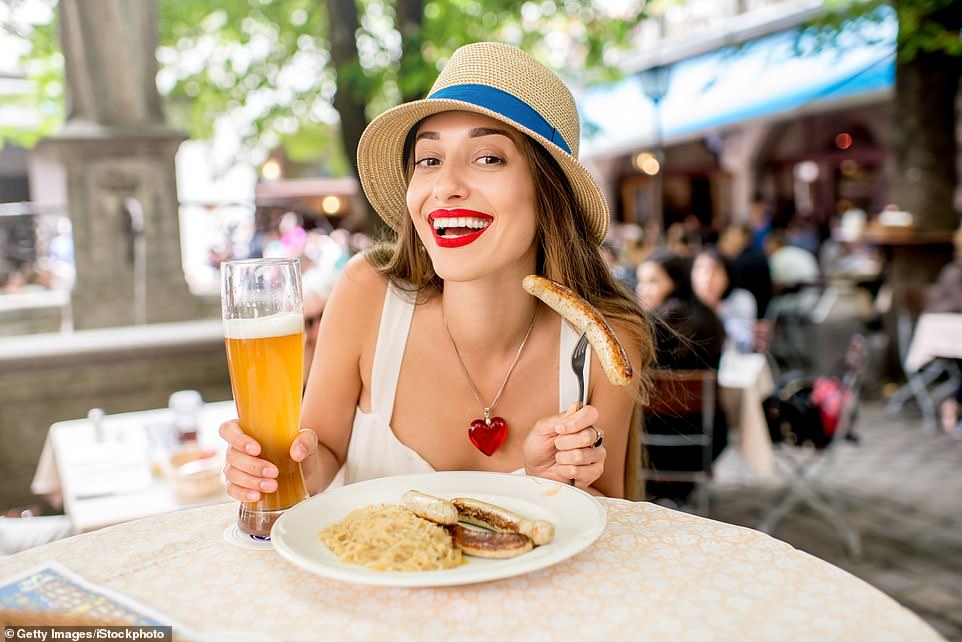 Germany is known for its love of sausages. One of the famous varieties is a blutwurst, or blood sausage (stock image)

You can still see the cages in which their rotting corpses were displayed for decades atop St Lambert’s Church, to the delight of the local ravens.

Present-day Munster is a much jollier place. After some slices of terrifying-looking but tasty blutwurst (blood sausage) at the Pinkus brewery, washed down by large glasses of strong Bock beer, I attempt to buy a cigarette from a bright-eyed student.

She donates it to me for free, suggesting I give my proffered euro to a homeless person. I ask her what she thinks of Brexit and she shakes her head apologetically. ‘It’s like a marriage,’ she replies wistfully. ‘It’s always sad when it ends.’ She isn’t sad, though, to be a student in Munster, calling the city ‘heaven on earth’. I privately reflect that the Anabaptists made a similar mistake, but I can see where she’s coming from. 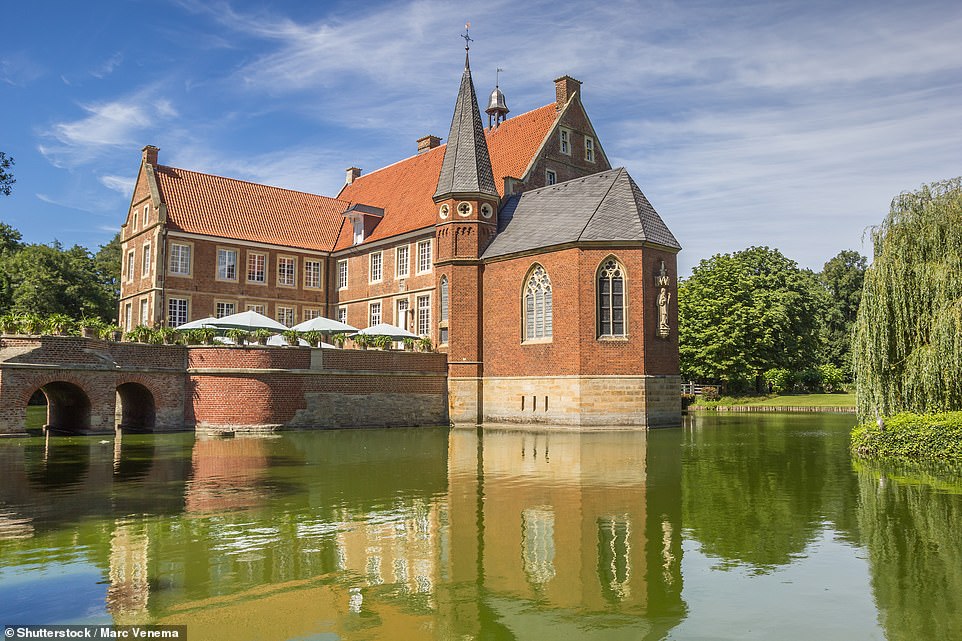 Burg Hulshoff, a handsome redbrick moated castle, was once home to the poet Annette Von Droste-Hulshoff

The place was badly bombed in World War II and, in a detail that to my mind sums up the philistinism of war, the Allies aimed for the cathedral spire, since they knew that it marked the centre of town. The post-war reconstruction has been deftly done in a combination of old and new styles.

Inside the cathedral, pay your respects to the towering statue of St Christopher, the patron saint of travellers.

He was a muscleman who once struggled to carry the infant Jesus across a river. It turned out that the child’s weight was the weight of the world’s sins.

The cathedral also boasts a large, intricate astronomical clock. The several hands rotate anti-clockwise, and mark 24 hours, as well as the planetary phases. Every quarter of an hour, a skeletal figure of Death rings the changes.

By contrast, the Picasso Museum seems positively cheery. It currently hosts an exhibition comparing his work with that of his friend Joan Miro. This demonstrates the truth of Picasso’s remark that every child is an artist; the challenge is to stay one.

Literature lovers should make a detour to the Burg Hulshoff. Six miles west of Munster, this handsome redbrick moated castle was once home to the poet Annette Von Droste-Hulshoff.

Born prematurely in 1797, she suffered health problems including severe short-sightedness. Undaunted, she grew up to become one of Germany’s most famous female poets, and wrote a mystery novella that was decades ahead of its time.

Munster is no further from London than Edinburgh. A mere 330 miles away all this awaits — and doubtless more than I am able to glean on my short trip.

I feel as if, two centuries after the heyday of German industrial espionage, it’s time for us to steal back a few secrets. So make for Munster and see what you can learn.

An American couple is stuck in Kuwait under 24-hour curfew and isn't allowed to grocery shop. The US embassy hasn't been helpful.