Spooky Stalins and lonesome Lenins: Eerie photo series captures the discarded statues of former Soviet leaders and the spots where they once stood

Statues of former Soviet leaders that once sat proudly in city centres have been discarded in private parks, isolated forests, empty fields and behind old buildings.

And their plight has been documented in a project by American photographer Matthew Moore.

His stark series includes an image of the heads of Lenin and Stalin on a palette in a basement, a giant Lenin head lying on grass at the back of the Estonian History Museum in Tallinn and a statue of Stalin hidden in a Czech garden, facing a hedge. 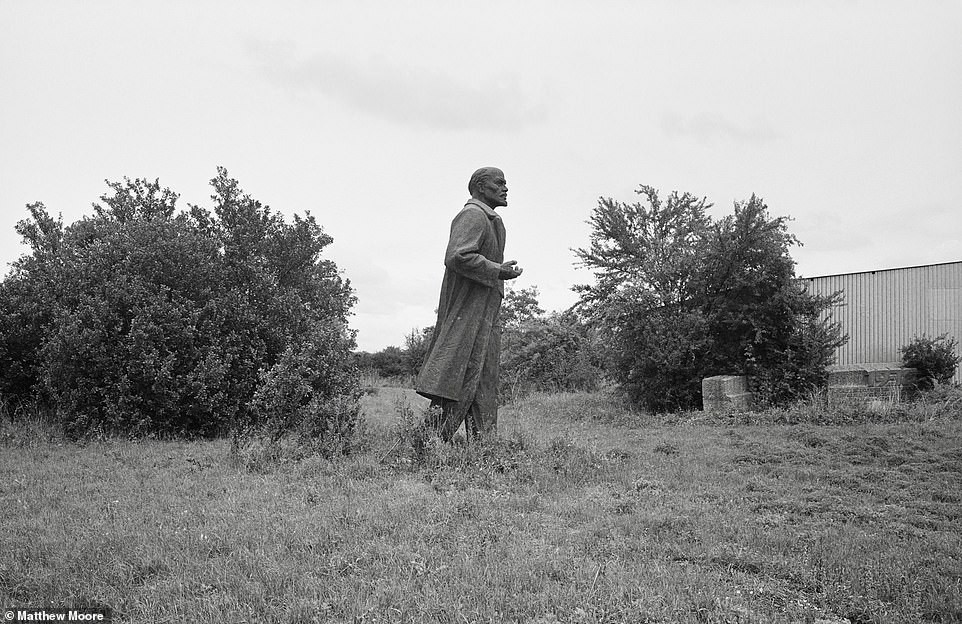 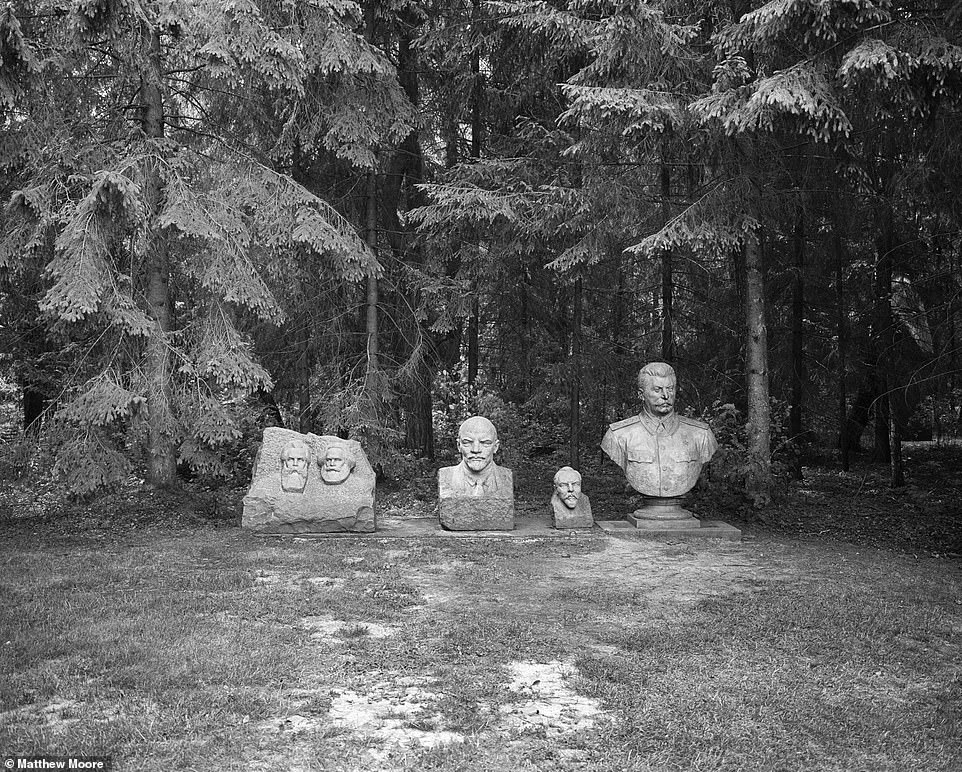 Busts of Engels, Marx, Lenin, and Stalin sit in front of fir trees in Grutas Park, near Druskininkai in Lithuania. The sculpture garden features dozens of Soviet-era statues 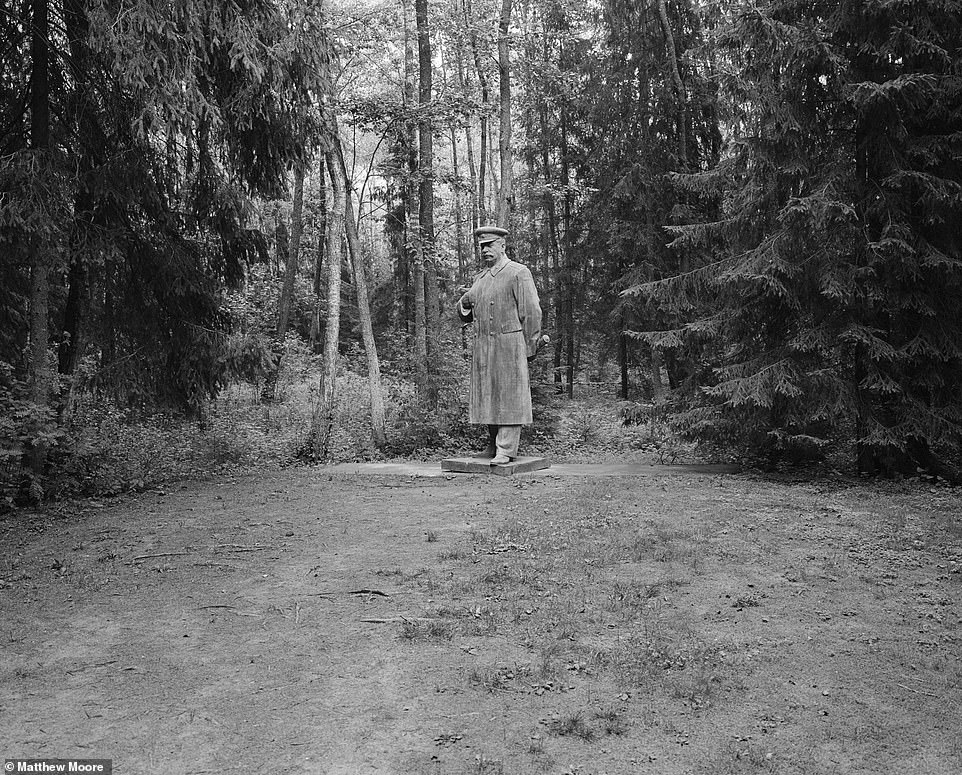 An isolated statue of Stalin stands eerily in the Grutas Park forest. The verdant setting is similar to the places where he sent thousands of people to their deaths while he was in power

Forty-five-year-old Matthew, based in Maryland, has travelled around former Soviet states not only tracking down where the statues have ended up – but what happened to the sites where they used to stand.

Matthew moved to the Czech Republic in the year 2000 and while he was there, and during regular visits since moving back to the U.S, he discovered that a statue of Lenin that once stood in the centre of the Lithuanian capital opposite the KGB building where people were tortured, is now displayed in Grutas Park.

Grutas Park, unofficially known as Stalin World, is also home to a statue of Stalin standing to attention in a forest similar to where he used to send people to die.

Meanwhile, boulders now sit in the former Leninplatz, Berlin, where a statue of Lenin stood. The monument was removed in 1992 and buried in 192 pieces in a wooded area outside Berlin. 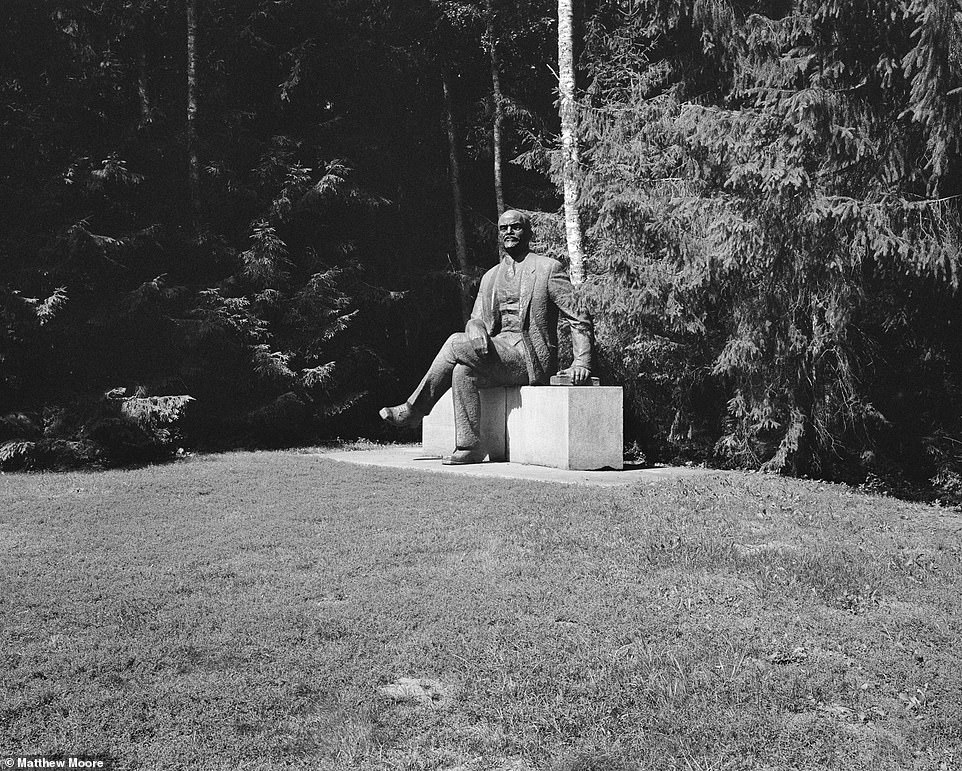 Lenin in a relaxed, cross-legged pose on the edge of Grutas Park 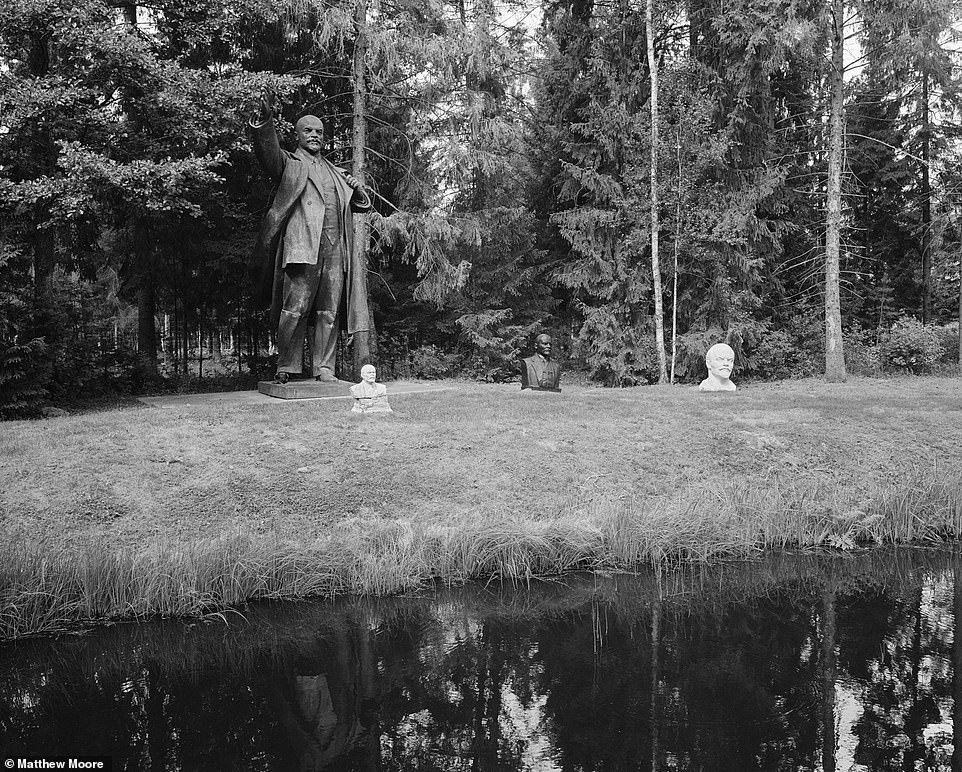 This statue of Lenin once stood across the street from a former KGB building in Vilnius, Lithuania, where thousands were tortured. It was later taken down and relocated out of the city to Grutas Park 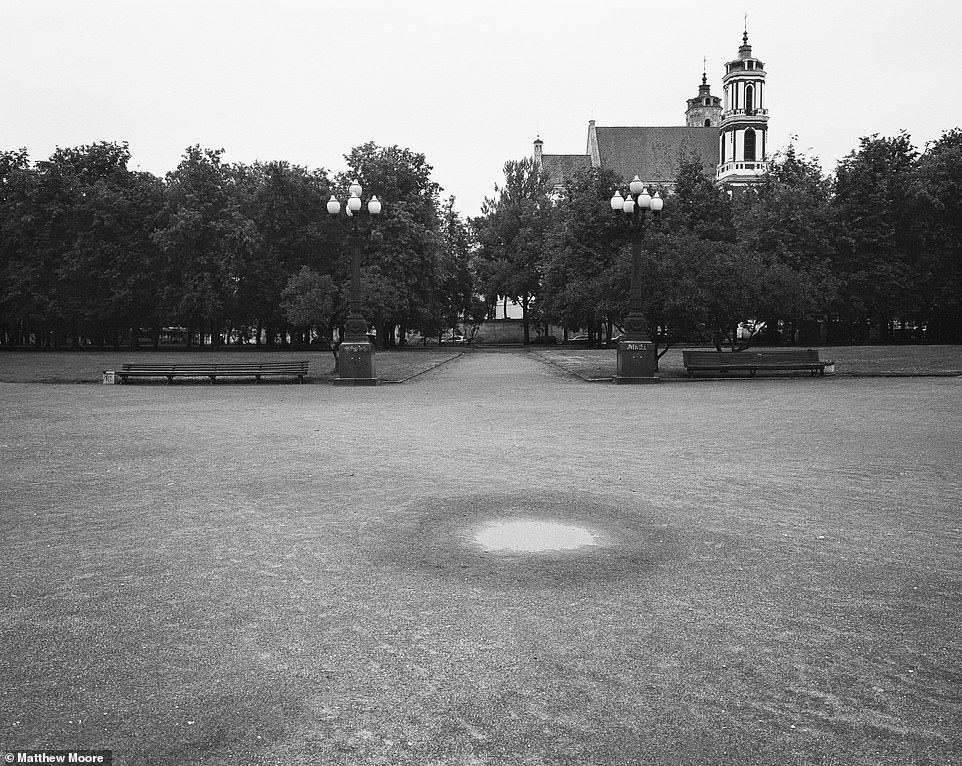 The toppling of Edward Colston’s statue in Bristol last year and the current court case on removing the statue of Confederate general Robert E Lee have highlighted the issue of political statues in the UK and U.S.

Matthew was happy that his photos could be part of the conversation.

He believes that the countries could learn from the ways former Soviet states have dealt with upheaval and trauma. 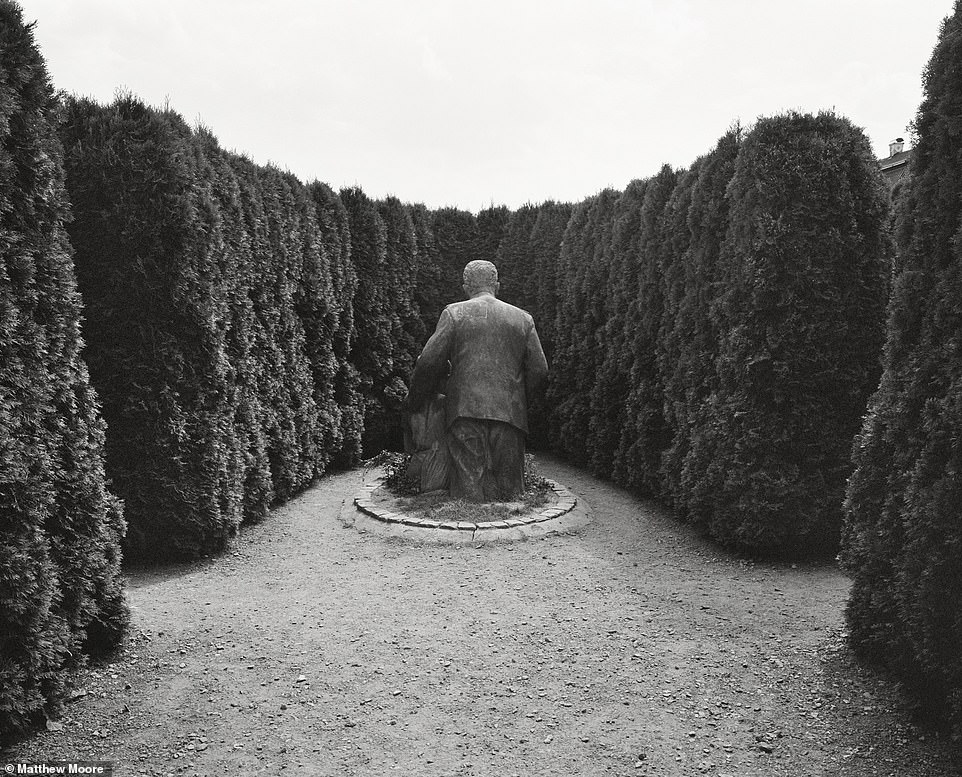 A discarded monument of Stalin stands facing away, half-buried at the centre of a labyrinth of a chateau that had been repossessed by the communist government in the Czech Republic. It had been commissioned just before the regime change and therefore never erected 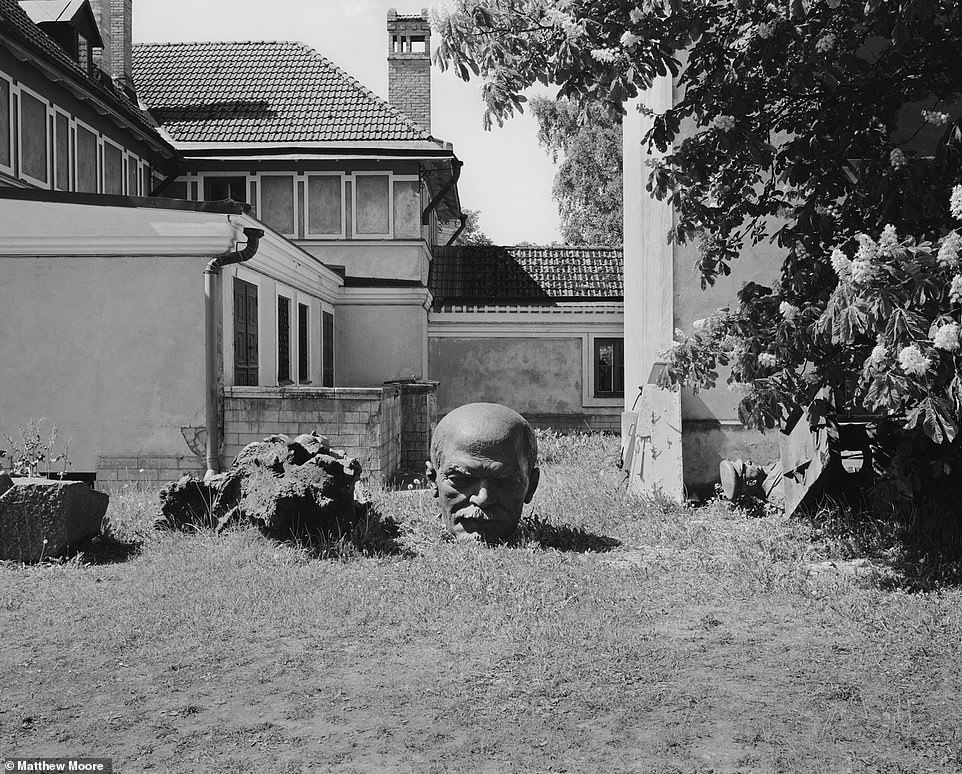 The head from a statue of Lenin lies abandoned at the back of the Estonian History Museum in Tallinn. The museum has been gathering discarded Soviet monuments for decades

‘What these societies have learned from the upheaval is that these statues are important. They have meaning and can be offensive,’ he said.

‘People in the United States don’t seem to feel that way. Well, not all of them. Many of them think if you tear down a statue, you’re erasing history.

‘That is complete nonsense. These statues are put there for a particular political reason.

‘I think that cultures there have an edge on us in terms of understanding the meaning of these works of art and these monuments.’ 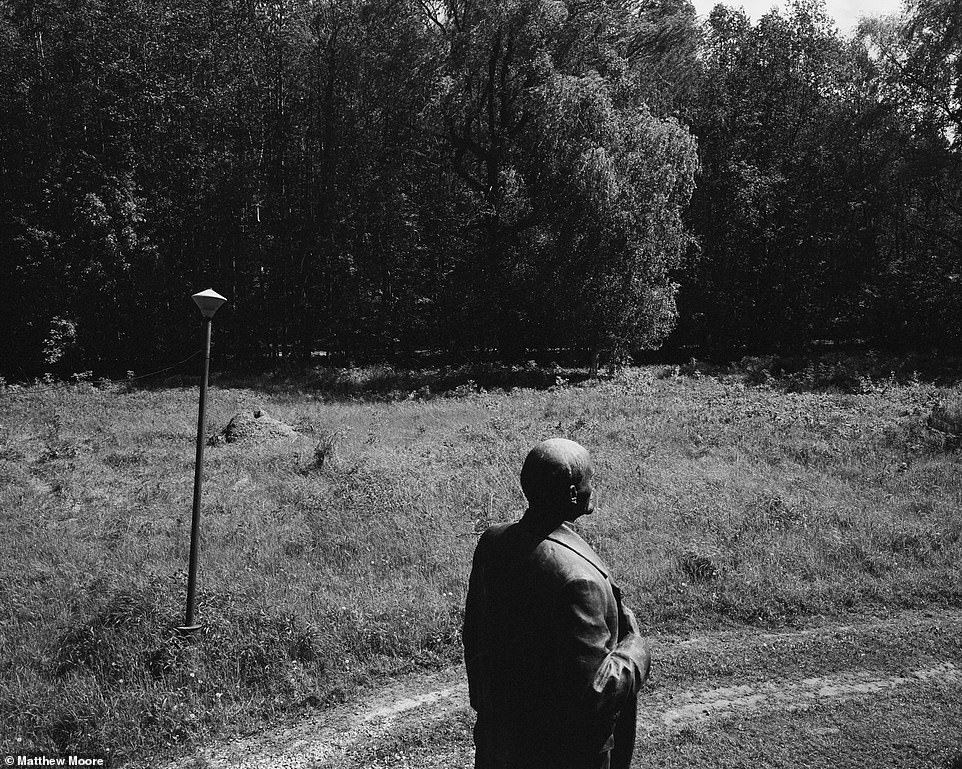 Moore believes that other countries could learn from the ways former Soviet states have dealt with upheaval and trauma. Pictured, a solitary Lenin in a statue graveyard in Tallinn, Estonia 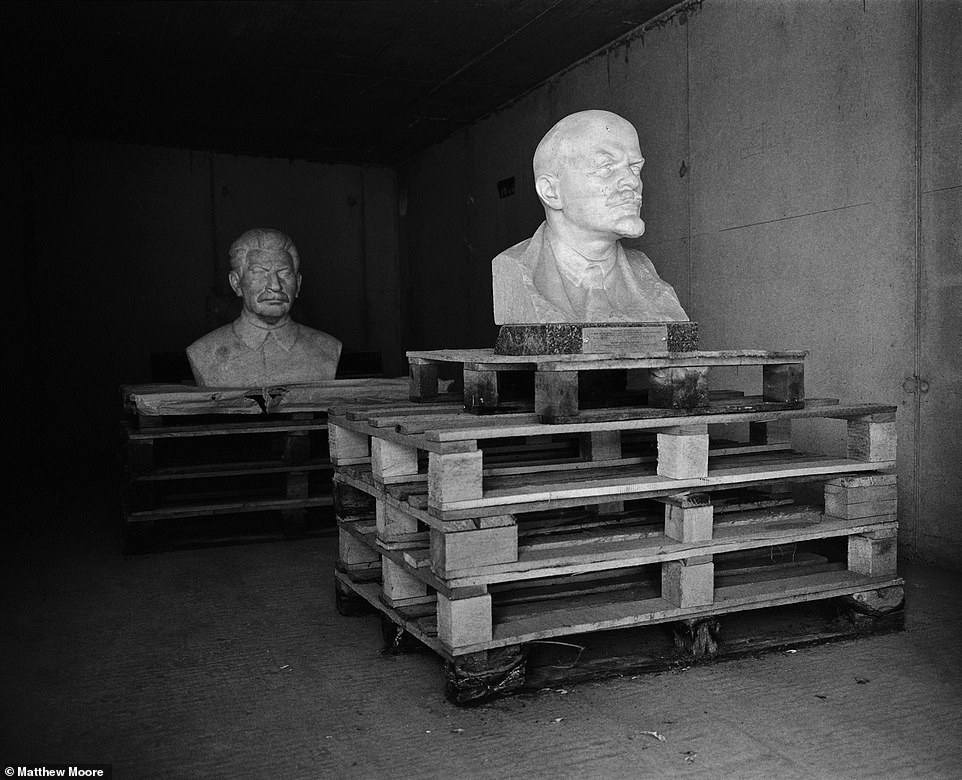 Busts of Stalin and Lenin are propped up on pallets hidden away in a basement room in Memento Park. The open-air museum in Budapest, Hungary, is dedicated to statues and sculptures from the country’s communist period 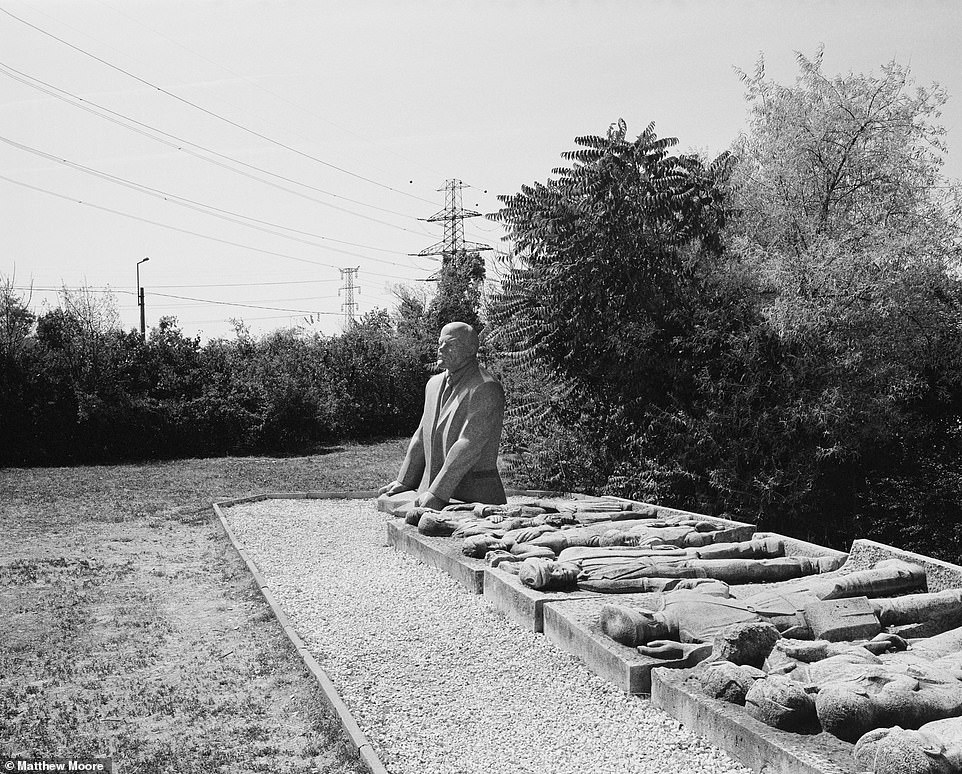 In places such as Budapest, the Soviet-era statues have been made available for people to see but have not been placed in the centre of town. Pictured, a piece of a Lenin statue sits beside a stone relief in the Hungarian capital’s Memento Park 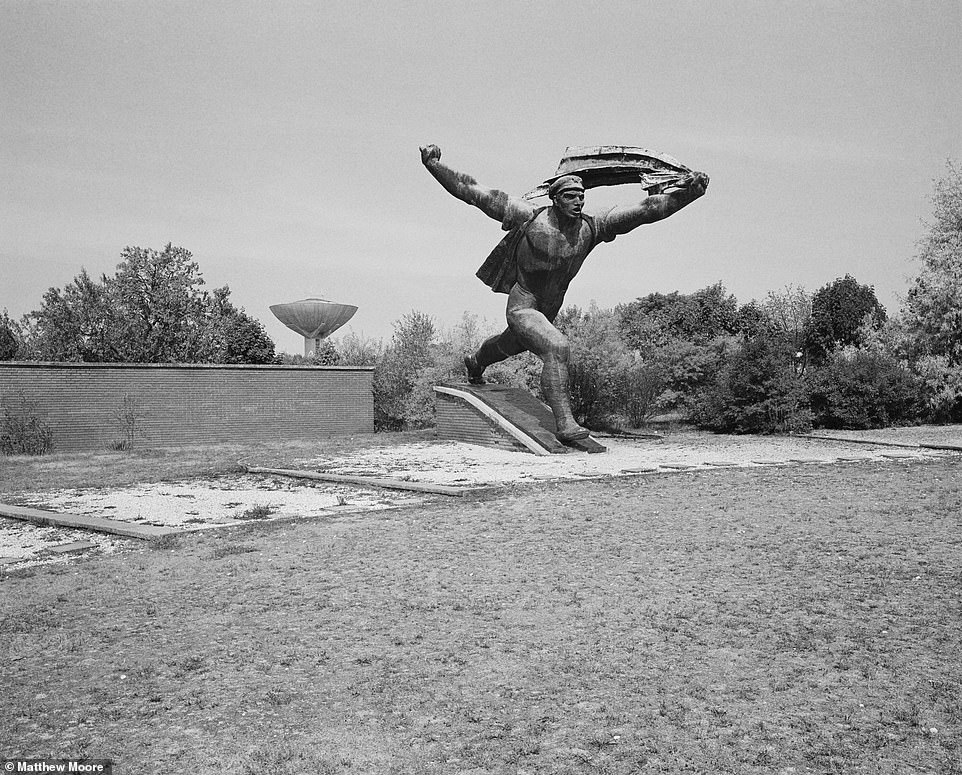 The Republic of Councils Monument, which was created in 1969 and depicts a charging sailor, once stood on Dozsa Gyorgy street in Budapest but now it resides in the city’s Memento Park

He was inspired to start the project after hearing about a man who set himself on fire in front of a Lenin statue in a Lithuanian town in 1989.

Fascinated by the story, he decided to look at the spot where it happened to take some photos.

Matthew – who’s Associate Professor of Photography at Anne Arundel Community College in Arnold, Maryland – categorised the project into two parts. The first, titled Scars, focuses on the exact locations where the statues once stood and the second, Idols, captures where the statues are today.

The photos show seemingly innocuous public parks and town squares, but they are still very charged places to some people.

Sometimes the absence of the statue is obvious, while the local government has tried to transform the space in some cases.

‘Different societies approach these problems in different ways and that’s what the project is really about. Then the same thing occurs with the unwanted statue that’s now been removed,’ Matthew said. 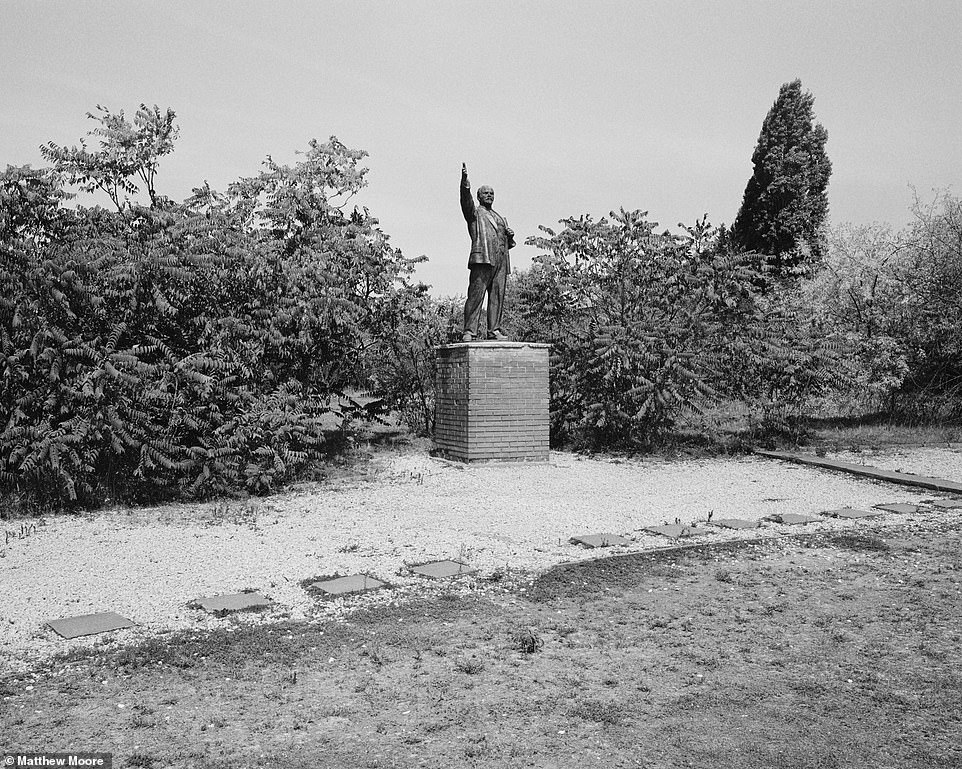 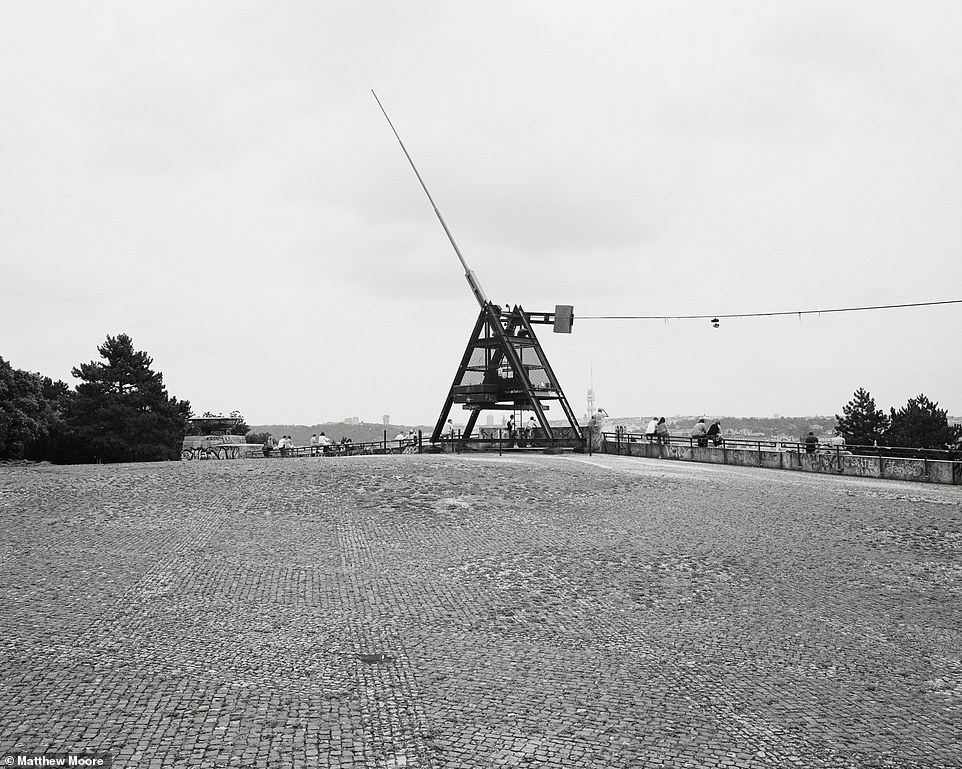 A metronome monument takes centre stage in Prague’s hilltop Letna Park. It stands in the same place where the largest Stalin statue in the world once stood. The Czech people blew up that monument during the period of de-Stalinization 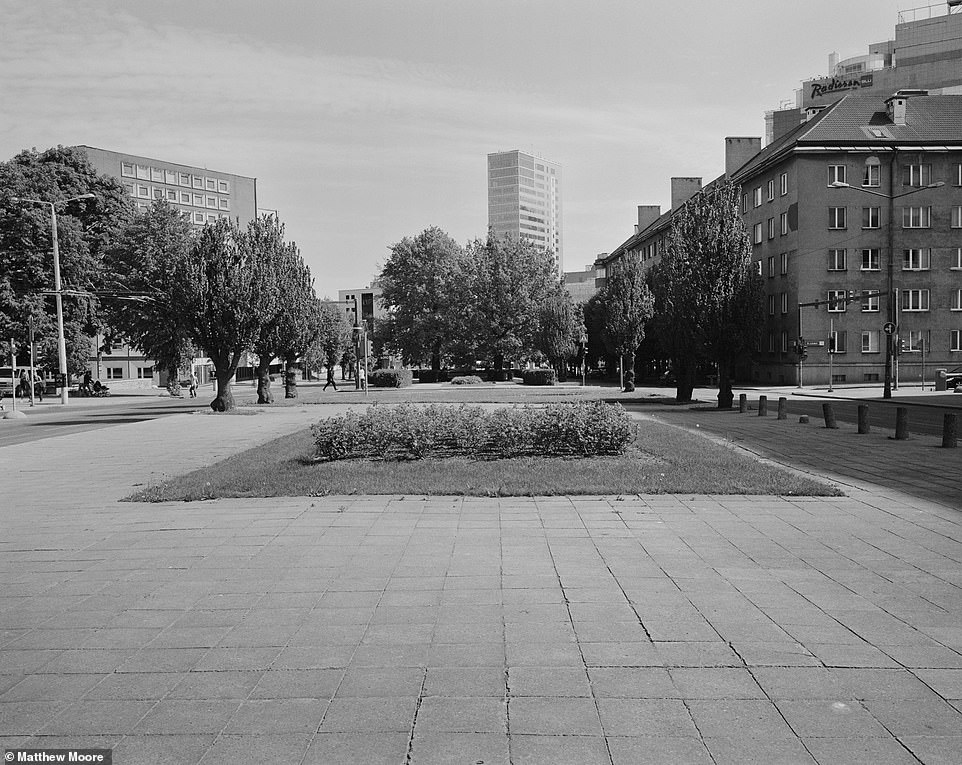 A square in Tallin, Estonia, where a statue of Lenin once stood has since been filled in with a small garden. Matthew’s project is categorised into two parts. The first, titled Scars, focuses on the exact locations where the statues once stood and the second, Idols, captures where the statues are today 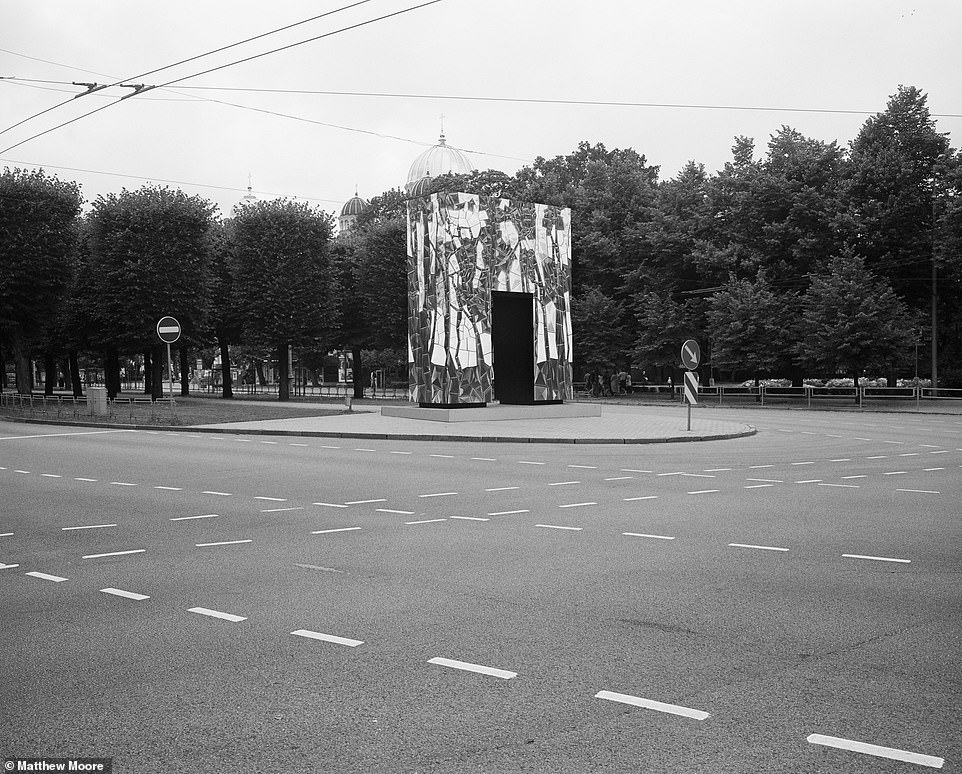 A decorative arch now stands in place of a large statue of Lenin that was torn down in 1991. The arch is located in the centre of the Latvian capital, Riga

Some statues are sold off, others are off the beaten path and some are even on display in well-known locations, such as Memento Park, Hungary.

In places such as Budapest, the statues have been made available for people to see but have not been placed in the centre of town.

‘It’s a compromise and a recognition of the power that they have. They are this haunting object that can upset people,’ Matthew said.

‘I think it depends on the amount of trauma that they suffered. Some societies really want to deal with that trauma in a healthy way and others want to just try to get through it and not look back.’

Some of the spots have changed since Matthew originally visited them.

In some cases, when the statues were first taken down nothing but an empty field was left, but years later a memorial or monument to anti-communism has been installed.

It is a matter of securing funds or having younger politicians who do not remember the trauma to debate the issue. 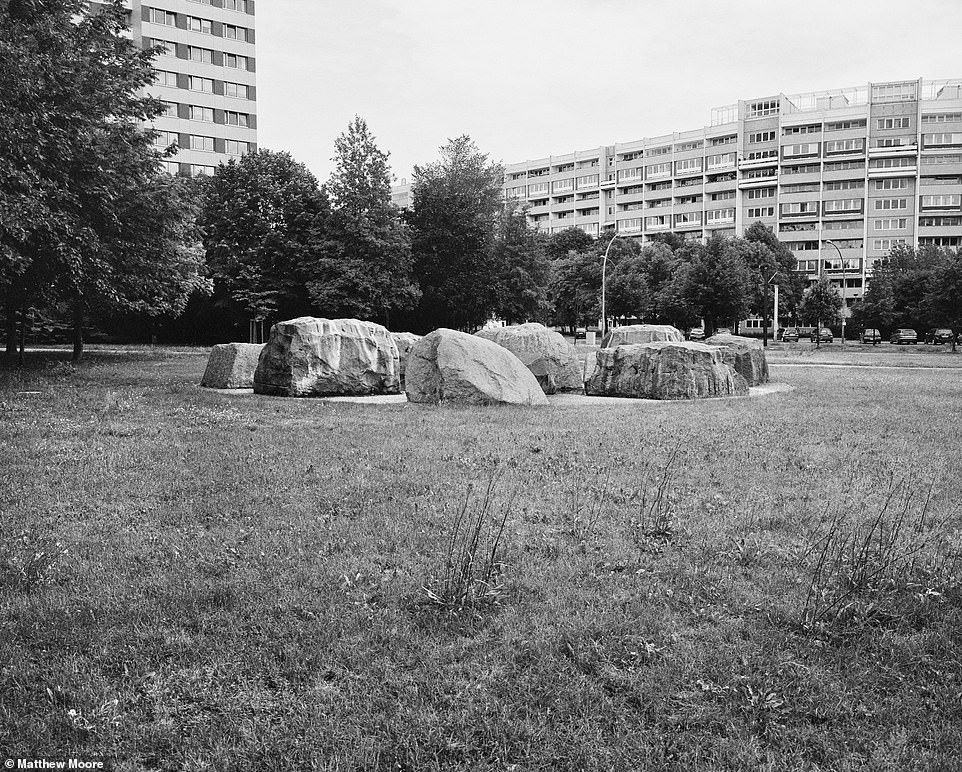 Boulders now sit in the former Leninplatz, Berlin, where a statue of Lenin stood. The monument was removed in 1992 and buried in 192 pieces in a wooded area outside the city 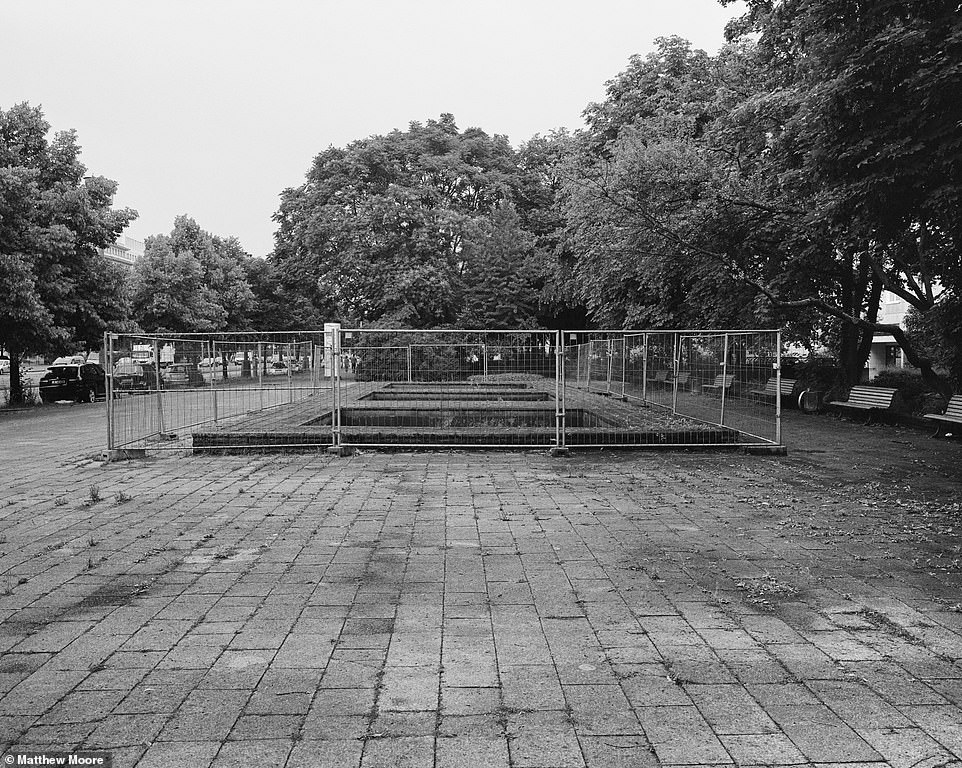 The Stalin statue that once stood on Karl-Marx-Allee (formerly Stalinallee) in Berlin, was pushed off its pedestal with a bulldozer and smashed into pieces. A fountain was installed in its place but has been out of operation for years

Matthew said: ‘If you ask an older person on the street where the statue was, they’ll tell you immediately, they always remember. There is never any hesitation.

‘I don’t really ask younger people because they don’t necessarily know. I think a lot of younger people walk over these spaces all the time and they really don’t understand the significance of this space.

‘That fascinates me. It’s actually one of the things that drives me to do the photographs. To help with remembrance.

‘It’s not necessarily just about that particular space, but just the idea that we are walking on hallowed ground at all times.’

The process of every photo begins with research. Matthew starts by looking for locations online. He looks at archival photos or searches for the locations on Google Earth, prints them out and plans a journey to cover three locations in two days.

An exhibition of the project – Post-Socialist Landscapes – will be on display at Blue Sky Gallery in Portland, Oregon, in 2022.

All Nippon Airways cleans up at SkyTrax cleanest airline awards