Home » Travel » The joys of The Ghan, a train that journeys through Outback Australia

All aboard The Ghan, an epic Outback express train that links Australia from north to south – winding its way 1,850 miles through one of the world’s most spectacular landscapes

Jackie, our conductor, announced: ‘We’ll shortly be reaching our final destination, Darwin. Passengers in the front coaches will be arriving at 2.30pm; if you’re at the back of the train it’s going to be more like a quarter to three.’

Pullmans have been with us since the 1840s. The Trans-Siberian, the West Highland Line, the Pride of Africa all evoke romance, adventure and, for those in first class, unabashed comfort. But from day one they had their detractors. 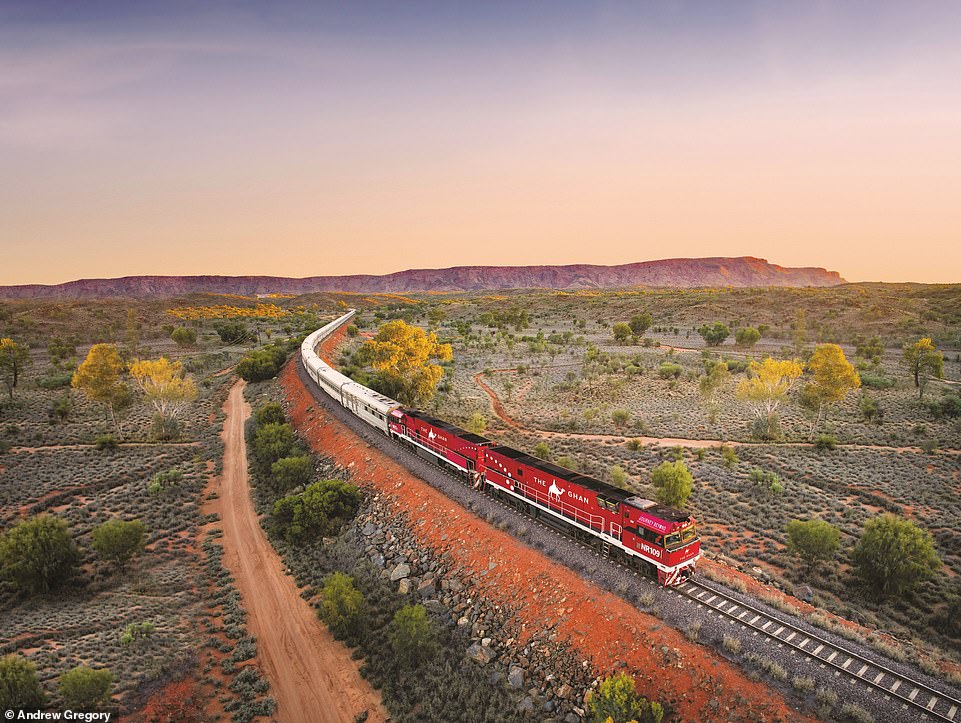 Roll with it: Mal Rogers travels through the bush aboard The Ghan, one of the longest trains in the world (pictured)

One Englishwoman in the early 20th century spoke about ‘the vulgar depravity there is aboard them nowadays’. That was Lady Chatterley speaking about the Orient Express.

Hedonism wasn’t always present. Some coaches had pianos and organs installed (for those wishing to enjoy a church service), also the odd library, occasionally a byre (cowshed). Tsar Nicholas II was so keen on fresh milk it is reported that on a state visit to Germany his train towed two carriages of cows and farmhands.

Today’s Ghan Train has no cattle, no organ, no library. But you’re guaranteed luxury and pampering. Hedonism you have to provide yourself. 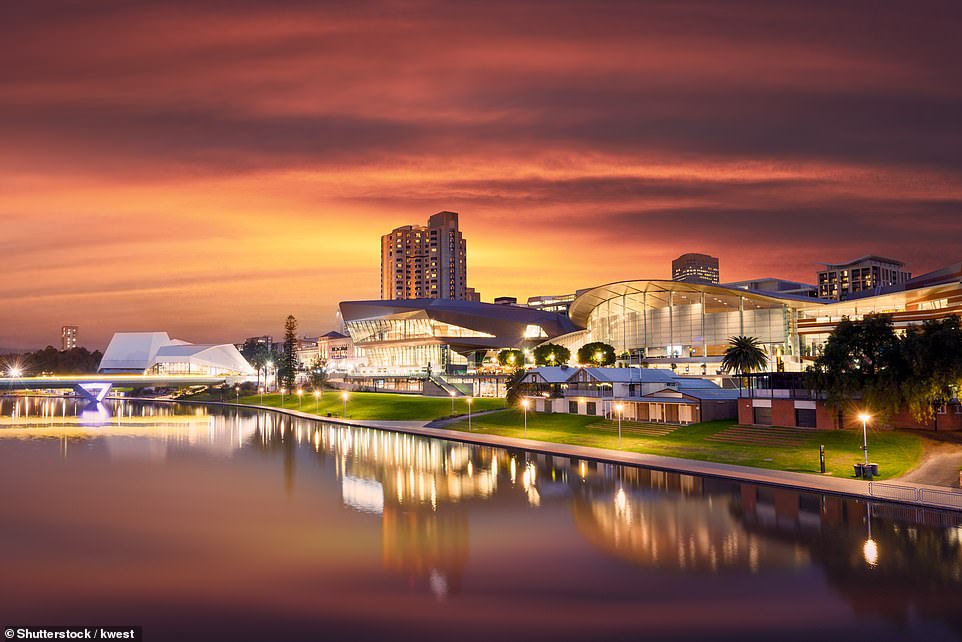 The Ghan travels some 1,850 miles between Adelaide (pictured) in South Australia and Darwin 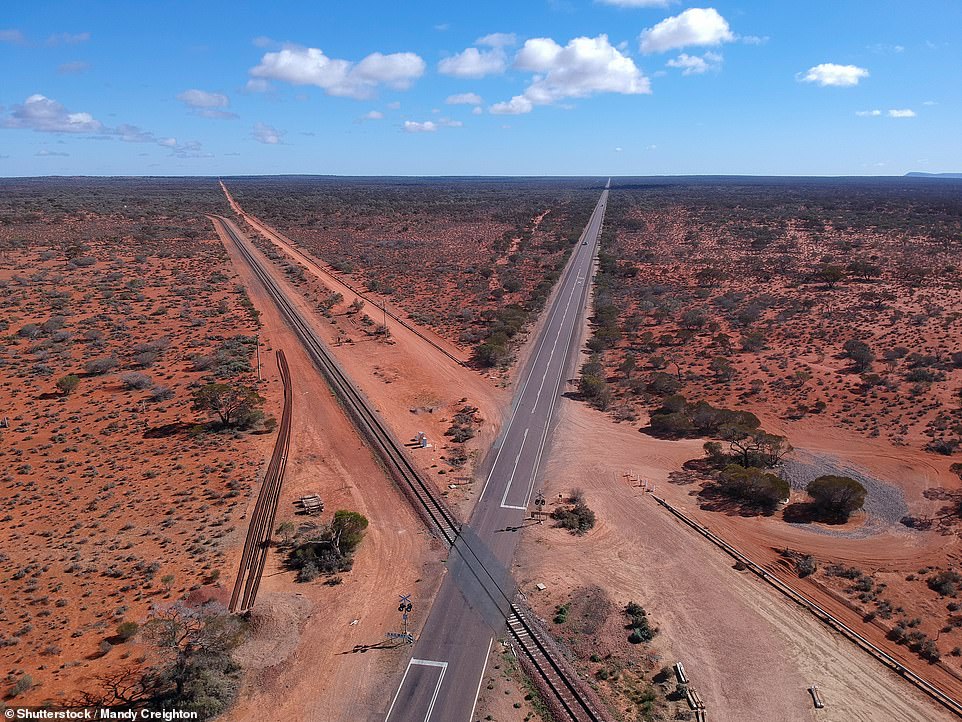 The route, here crossing the Stuart Highway in South Australia, is ‘one of the world’s great rail journeys’ 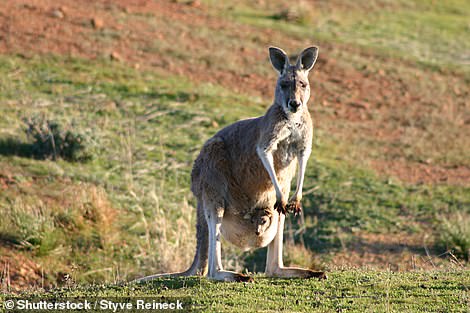 ‘From The Ghan you’re as likely to see a camel as a kangaroo,’ writes Mal

It makes the return journey between Adelaide in South Australia and Darwin at the tip of the Northern Territory — some 1,850 miles away — twice a week. One of the world’s great rail journeys, it takes 54 hours, including a four-hour stopover in Alice Springs. Occasionally, the train stops early morning (say 5.30am to 6am) if there’s a particularly good sunrise.

Until 1929, the last leg of the journey had to be done on camel. Not a whiff of that now. If you wish, you can stay in your Platinum-class cabin, which includes an en-suite bathroom. The bed converts into a comfortable sofa so you can sit and gaze at the Outback; see if you can spot any camels. Today, Australia has the largest population of feral dromedaries in the world. From the Ghan you’re as likely to see a camel as a kangaroo. 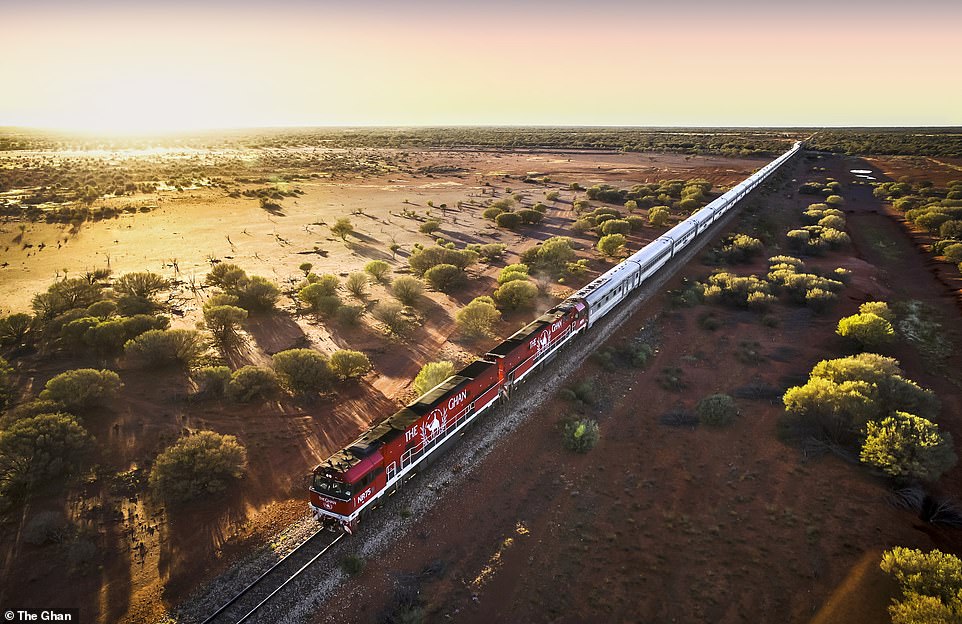 ‘If you wish, you can stay in your Platinum-class cabin, which includes an en-suite bathroom,’ writes Mal 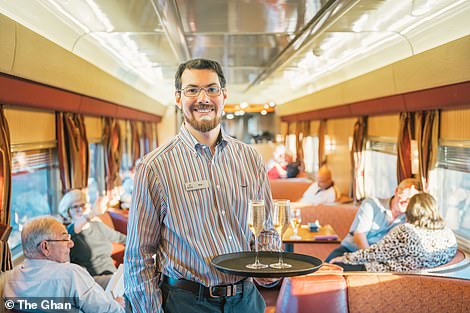 A waiter serving champagne on the Ghan. According to Mal, the train’s prices aren’t cheap, but they do include all your meals and drink, gourmet standard, in the Queen Adelaide restaurant cars

The Gold Service has three cabin options: Gold Superior, Gold Twin and Gold Single. It’s not quite as plush as Platinum, but still comfortable. The prices aren’t cheap, but they do include all your meals and drink, gourmet standard, in the Queen Adelaide restaurant cars: breakfast, two-course lunch and three-course dinner.

In the Outback Explorer Lounge towards the front of the train, the chablis was chilling nicely, as indeed was I. This is the perfect place to meet your fellow passengers, or indeed to explore the Outback through its wide picture windows.

There’s a bar service and snacks served throughout the day, and in the evening, as the sun sets over the distant horizon, a sing-song can occasionally break out. On my second night a spontaneous version of Waltzing Matilda had most people trying to join in. Judith, a South African lady turned to me and said: ‘I’m sure I heard that set to music once.’ 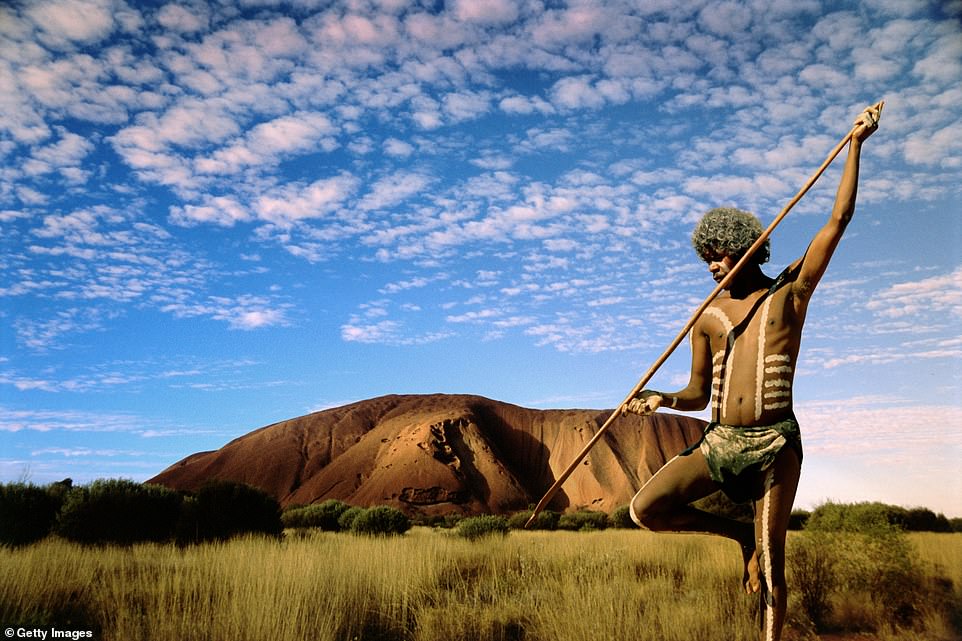 History maker: An Aboriginal hunter at Uluru. Passengers can get an optional upgrade to visit the famous rock formation 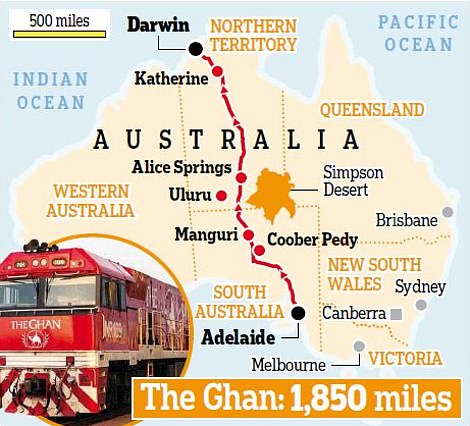 The singing may not be in tune, but the serving people definitely are. They’re jolly, efficient and friendly, in keeping with the casual atmosphere on board.

Dress is informal at meal times — although a few people did glam up for dinner. Des, from New Zealand, was taking the trip for the first time. He was downing his second gin and tonic before dining. ‘It’s always been my dream to do this journey,’ he said. ‘Funnily enough, I was going to bring my special St Patrick’s Day suit. It’s exactly the same as all my other suits, except it has my name and address painted on the back. Don’t need that here. Somebody can just guide me to my cabin and push me in.’ Certainly, the wine, and the gin, flowed freely.

The Platinum Club is the exclusive section further down the train — cocktails, barista coffee and snacks are all part of the deal, and dinner is served here as well. The train has endured a long lay-off because of Covid, but services have finally resumed. I waited for The Ghan at Adelaide’s Keswick Terminal.

Fellow travellers were now gathering on the platform. A gentleman from the train-spotting community nearby clearly wanted to impart details. I can anorakly confirm that the Ghan locomotives are Pacific National NR class engines. The ‘Ghan’ name probably comes from the Afghan cameleers who once worked in the Outback.

We finally clanked out. The Ghan chugs along at a leisurely pace through endless stretches of bush, which at some point become Outback. We passed through farmland, bluebush prairie and semi-desert lands where scrubby vegetation poked through the dry, red soil. The landscape shimmered — we were crossing through some of the hottest parts of Australia. Around 40 c (104 f) means it’s turned out nice again. 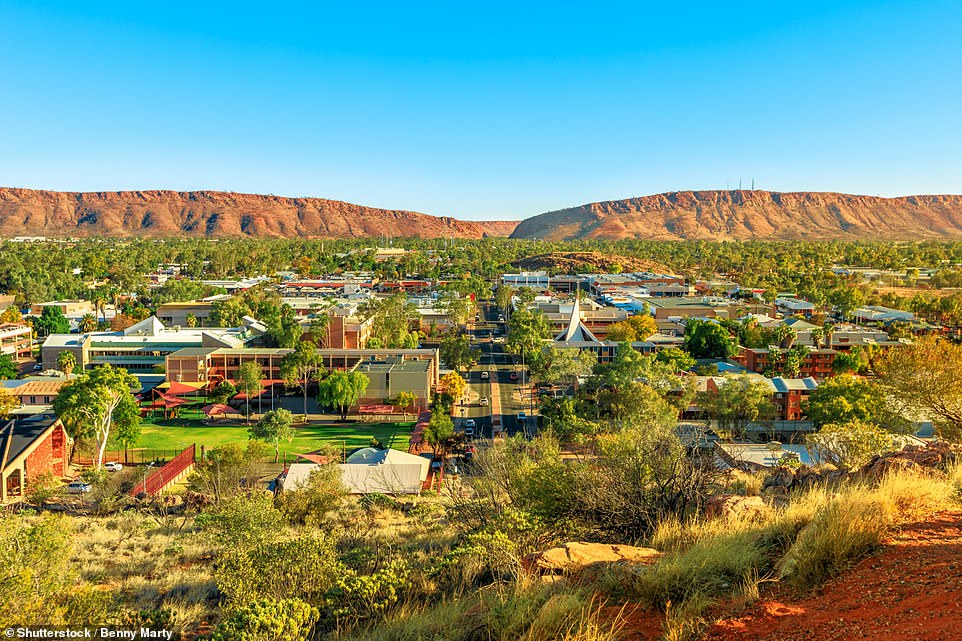 The Ghan, which makes a return journey twice a week, grinds to a halt for a four-hour stopover in Alice Springs (pictured) 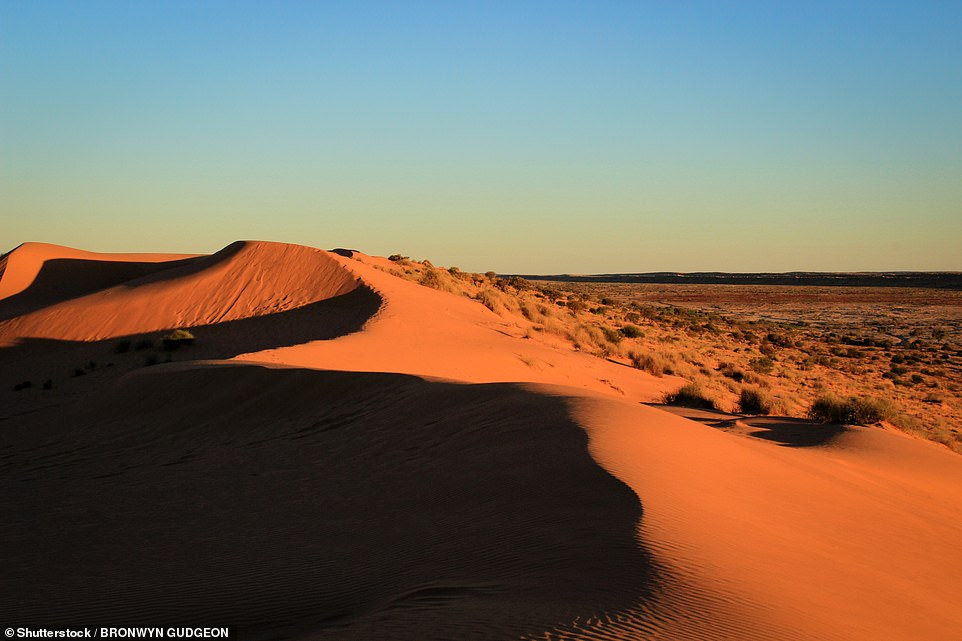 As Mal nurses a stiff gin and tonic, The Ghan speeds through the sparse Simpson Desert, pictured

Tickets on The Ghan’s four-day Adelaide to Darwin trip cost from £1,920 pp one way, including meals and drinks (journeybeyondrail.com.au). Qatar Airways (qatarairways.com) London to Adelaide from £893 return.

Just after Alice Springs we began speeding through the sparse Simpson Desert. It has astonishing immensity: 70,000 square miles. That’s more than double the size of Ireland. My mind boggled alarmingly; but a stiff gin and tonic seemed to calm me.

The days pass mesmerically, transcendentally even, with time almost suspended. Fans of irony will enjoy that because with the comin’ of the railroad, time was imposed on everyone whether we were going anywhere or not. Yet today, the most languid way to travel is by train. And so we trundled northwards.

Darwin is situated in what the Australians call the Top End. It’s a rustic place. When the Ghan arrived on its inaugural journey on the new line, a group of some hundred Darwinians lined the tracks and mooned at the passengers. Not as a protest, just for the craic.

The Ghan is an astonishingly attractive way to see the forbidding landscape of Australia, and some of its more climatically aggressive areas — the Outback, the bush, the desert, the endless plains. But this is Australia from a comfy chair, with champagne on ice, and the sun setting over the far distant bluebush prairieland.

And it’s back in action at last.

‘Why is everyone in Reykjavík staring at me?’ – a cartoon

Top 3 activities for teenagers on an Alpine activity holiday

Greece travel update: Has Greece gone into lockdown? Where in Greece can you travel to?