Operation freedom: How the Greeks have launched an extraordinary mission to jab EVERY adult on 60 islands – so they can welcome Britons from May 17. And here’s where to visit…

Greek islands have never sounded more alluring. Ever popular with British tourists seeking their own slice of Mamma Mia! with sun, sea and an easy-going atmosphere, the Aegean archipelago now has an added Covid string to its bow – the Greek government says it is on target to vaccinate everyone on more than 60 of its smaller islands by the end of this month.

The inoculation programme, codenamed Freedom by the Greeks, will result in even more islands being covered by mid-May, when tourism minister Haris Theoharis says the country plans to welcome Brits with open ‘arms and doors’.

As Greece’s vaccination total for a first dose is still a modest 13 per cent, the push to get so many more jabs into arms, by ensuring vaccines get to sometimes tiny, hard-to-reach islands, raises the enticing prospect of a safe destination for tourists. 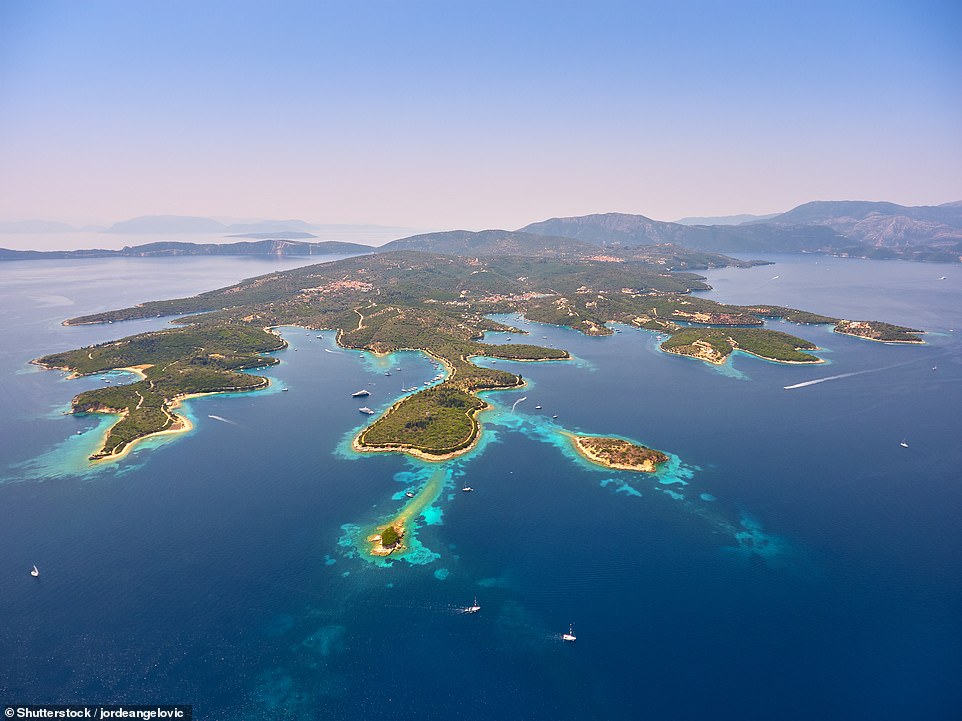 A stunning view of Meganisi. According to Dimitri Patrikios, managing director of Ionian And Aegean Island Holidays, the island has been fully vaccinated

‘It is a complex operation, getting vaccines to far-flung islands that don’t have airports, but it is being done with the help of helicopters and military flights,’ said Emy Anagnostopoulou, director of the Greek National Tourism Organisation (GNTO). ‘By the end of April, 69 or 70 islands will be fully vaccinated – 61 small and medium islands with up to 3,500 residents, plus some larger ones.’

The programme is also targeting all tourism industry employees, including ferry and bar staff, taxi drivers and waiters.

First of the islands to benefit from the blanket vaccination scheme was Kastellorizo, the most eastern of the Dodecanese, as well as being one of the smallest and, arguably, the prettiest. Reached by ferry from Rhodes, its harbour with colourful neoclassical mansions separated by cobbled alleys is witness to its wealthy, seafaring past.

Now it’s a sleepy place with fewer than 500 residents, where you can explore Castello Rosso, built by the knights of St John, which gave the island its name. Take boats to islets with sandy beaches, and be amazed by the stalactites in the Blue Cave. 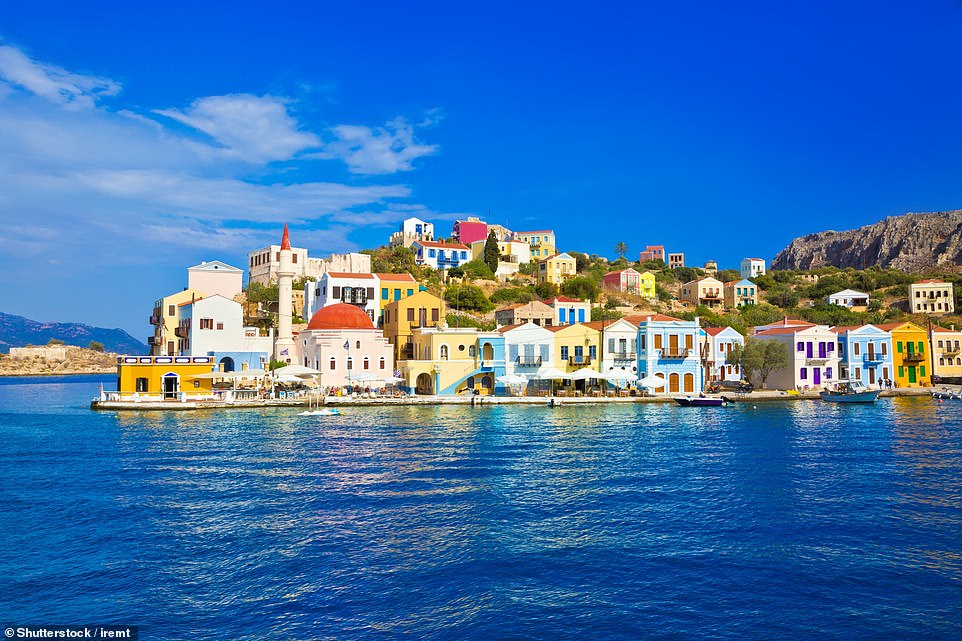 A real shot in the arm: The colourful Kastellorizo harbour. The island was the first to benefit from the blanket vaccination scheme

The Greek specialist travel company Sunvil, which features many of the country’s smaller islands, has seven nights’ B&B at the Kastellorizo Hotel, leaving on July 15, from £1,044pp, including flights from Gatwick to Rhodes and all transfers (sunvil.co.uk).

Sunvil has also added the sparsely populated archipelago of Fourni to its programme this year. All residents of Fourni will be vaccinated by the end of April, according to the GNTO.

Between Samos and Ikaria, this smattering of a dozen or so islands was once a haven for pirates.

The main island, also called Fourni, is where in-the-know Greeks go for summer holidays, and gives a taste of what Greece’s islands used to be like in the 1980s. There are no high-rises and not even a single swimming pool, but there are beautiful beaches and bays around the main island, lapped by the clearest of seas. 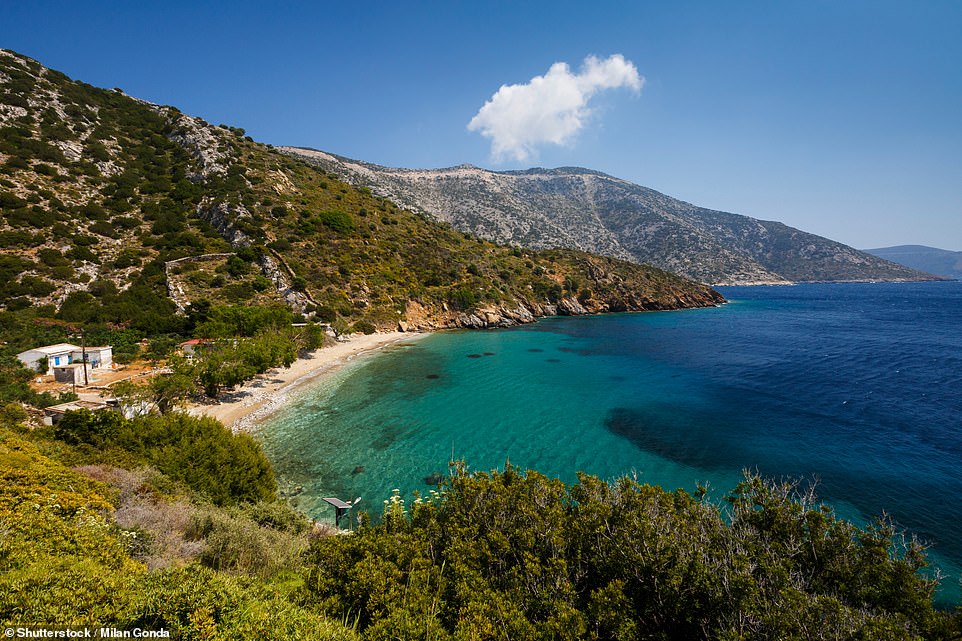 The island of Fourni, where in-the-know Greeks go for summer holidays. It has beautiful beaches and bays, lapped by the clearest of seas

Seven nights at the Archipelagos Hotel, whose 12 rooms all look over the little fishing harbour, costs from £695pp, with flights and transfers (sunvil.co.uk).

Although the Greek government has been reluctant to name specific islands where all residents have been vaccinated, for fear of a backlash from other areas, in the Dodecanese islands they include Halki, Symi and Tilos.

Lipsi, also in the Dodecanese, has had almost all of its population of 800 vaccinated. The mayor, Fotis Mangos, confirmed last week that the island had had just one Covid case since the outbreak of the pandemic, and that he was ‘very, very satisfied’ the vaccination programme was leading to an increase in bookings.

The jab rollout there has already prompted specific enquiries from holidaymakers about a boating itinerary featuring Lipsi, according to SailSterling, which runs skippered catamaran charters with onboard chefs.

It added Greece to its European programme earlier this year but already the country is ‘number one in terms of enquiries’, said co-founder Kiran Fothergill. 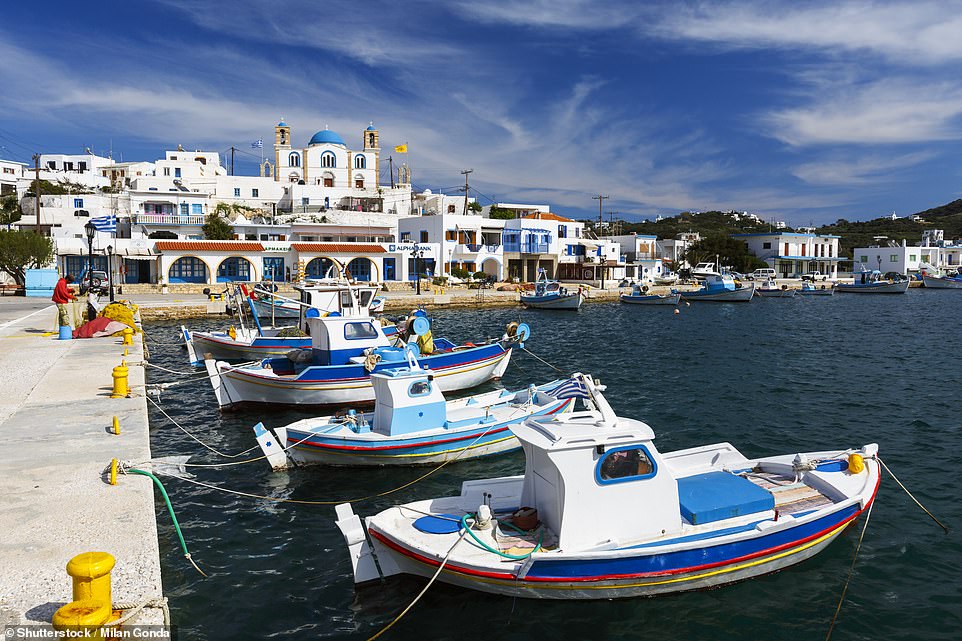 Lipsi, in the Dodecanese, pictured, has had almost all of its population of 800 vaccinated. The mayor, Fotis Mangos, confirmed last week that the island had had just one Covid case since the outbreak of the pandemic

As a result, SailSterling has developed an itinerary from Kos that takes in Lipsi’s hidden coves, accessible only by boat or on foot, the massive rock formations of Kalymnos, and Patmos, where you can visit the Monastery of St John the Evangelist.

‘Going in your own bubble is popular right now,’ added Fothergill. ‘People know the islands are well protected against Covid and are requesting less-well-known routes.’

The company also has an itinerary around the quieter parts of the Cyclades. You can tick off Syros, with its picturesque capital of Ermoupoli, and Serifos, featuring the imposing town of Chora on a rocky hill. 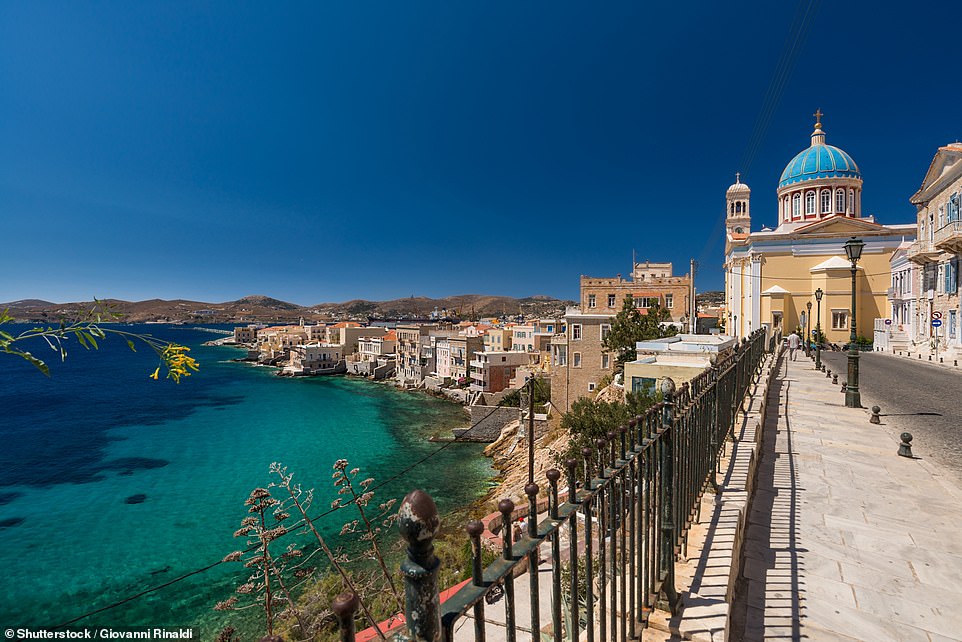 A highlight of the trip, which also includes Sifnos, Naxos and Paros, is the wild, mountainous island of Kythnos. Here, if you can tear yourself away from the beautiful Kolona beach, you can visit the ruins of a medieval city at Cape Kefalos or see the Monastery of Panagia Kanala. A week in a catamaran for eight costs from £3,680pp, including food, drinks and mooring fees but not international flights (sailsterling.com).

Not everyone can afford a week on a boat, but on land, interest in villas is higher than in hotels, according to Dimitri Patrikios, managing director of Ionian And Aegean Island Holidays. ‘We have definitely seen more people booking villas this year,’ he said.

On Skopelos, where Mamma Mia! was filmed, you can stay in the gorgeous Villa Thea, with three bedrooms and a panoramic view from its swimming pool. A week with flights plus car hire is from £1,173 per adult and £1,055 per child (ionianislandholidays.com). 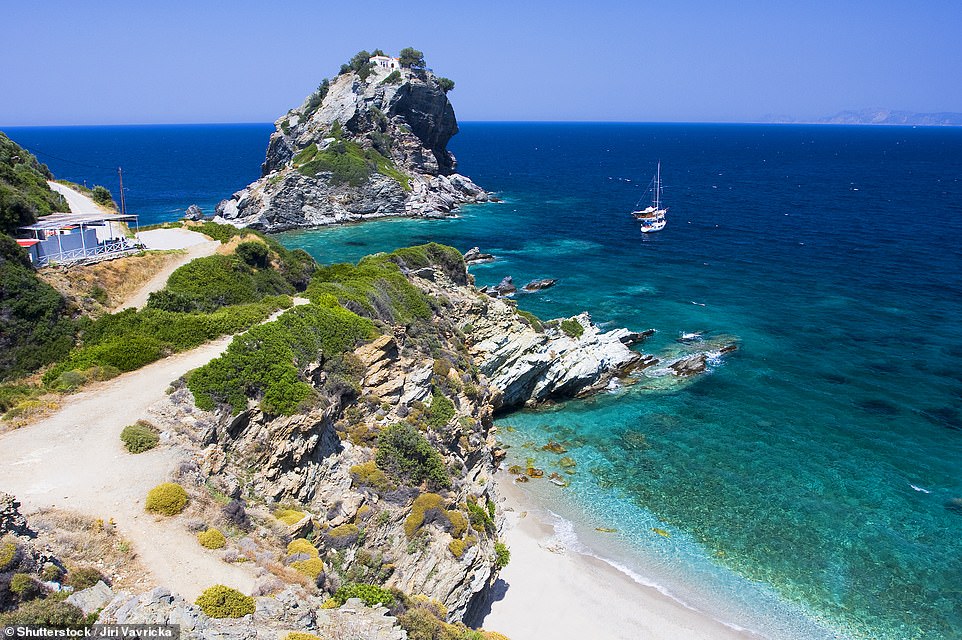 The stunning island of Skopelos where the hit film Mamma Mia! was filmed

But it’s not just Aegean islands that are benefiting from the blanket island vaccination, according to Patrikios. ‘Meganisi, in the Ionian, with a population of fewer than 1,000 people, has already been completely vaccinated,’ he said. ‘And Paxos and Ithaca are in the programme this month.’

Although its name actually means ‘big island’, Meganisi, which is just off the coast of Lefkada, is actually tiny. There’s plenty of charm, though. You’ll find exceptional seafood tavernas in the yachtie port of Vathi, or you can buy your own from the fishermen to cook in one of six cottage-style Thalassa Limonari Villas.

Swim in the private pool or walk three minutes to the clear waters of Limonari Beach. A week in a two-bedroom villa with flights and car hire is from £1,008pp (ionianislandholidays.com).

Meanwhile, holidaymakers booking hotels are opting for longer stays, often with groups of families and friends. Vassiliki Petridou-Michalopoulos, who runs the luxury hotel Calilo on Ios, said when it opened two years ago, the average stay was for seven nights, but now that had increased to up to 12. 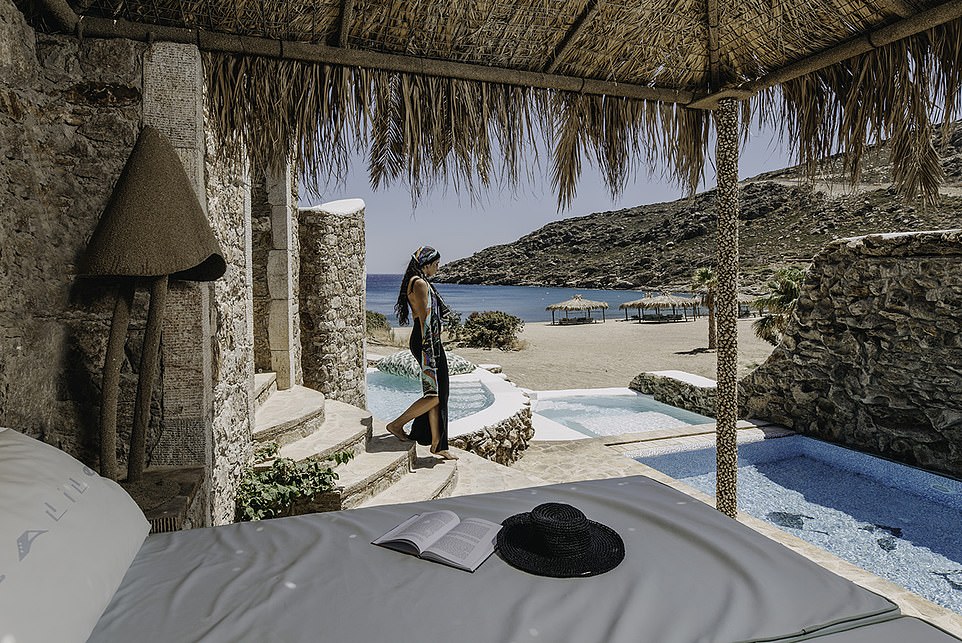 An opulent suite at the Calilo Hotel on Ios. The island of Ios has 36 beaches, many of which can be reached only by sea

Built from stone from its 1,000-acre site, Calilo has just finished seven opulent new suites, making 35. It is also opening ten Rock Pool private dining areas, or guests can take a boat and a picnic to one of the secluded neighbouring beaches. The island, with a population of about 2,000, has 36 beaches, many of which can be reached only by sea. A one-bedroom suite at Calilo costs from £295 a night (calilo.com).

Petridou-Michalopoulos says holidaymakers this year are most interested in flexible cancellation policies. Konstantinos Santikos, managing director of the Santikos Collection of hotels, agrees. ‘Flexibility on cancellation is crucial to any booking, which is why we offer it up to 24 hours before your stay if there is a pandemic-related change of plans,’ he says.

One of the collection’s hotels is the remote Marpunta Resort on Alonissos, in the Northern Sporades, which is reached by a 90-minute boat trip from Skiathos followed by half an hour’s taxi ride. The surrounding waters form part of the National Marine Park of Northern Sporades, where you’ll see rare seabirds, dolphins and possibly the Mediterranean monk seal. 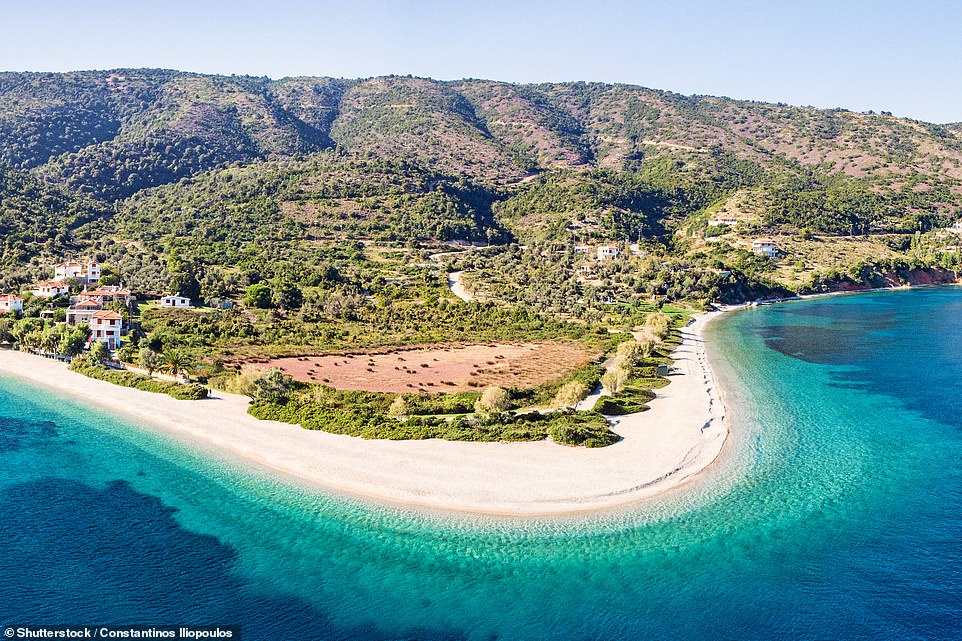 A beach on the island of Alonissos in the Northern Sporades. The island is reached by a 90-minute boat trip from Skiathos

Take boat trips from the beach to explore the marine park, or follow the walking trails (there is even a herbal hike, where guests learn about some of the 1,000 types of herbs that flourish on Alonissos).

There’s a free shuttle into town, too, and a pool and tennis courts at the 104-room hotel. A week’s B&B in July costs from £1,049pp with flights and transfers (ba.com).

As with other small islands, you do need to transfer through a larger isle or from the mainland to get there, but tourism staff will be vaccinated, creating a safe transfer for holidaymakers.

The issue is now whether Brits can travel to Greece as soon as the UK Government gives the green light to international travel on May 17. We should have more clarity tomorrow, when the Government announces the results of its Global Travel Taskforce.

Sunvil chairman Noel Josephides said: ‘We can’t be in a situation where the whole of the country is shut if the islands are quite safe after the vaccination campaign.’ 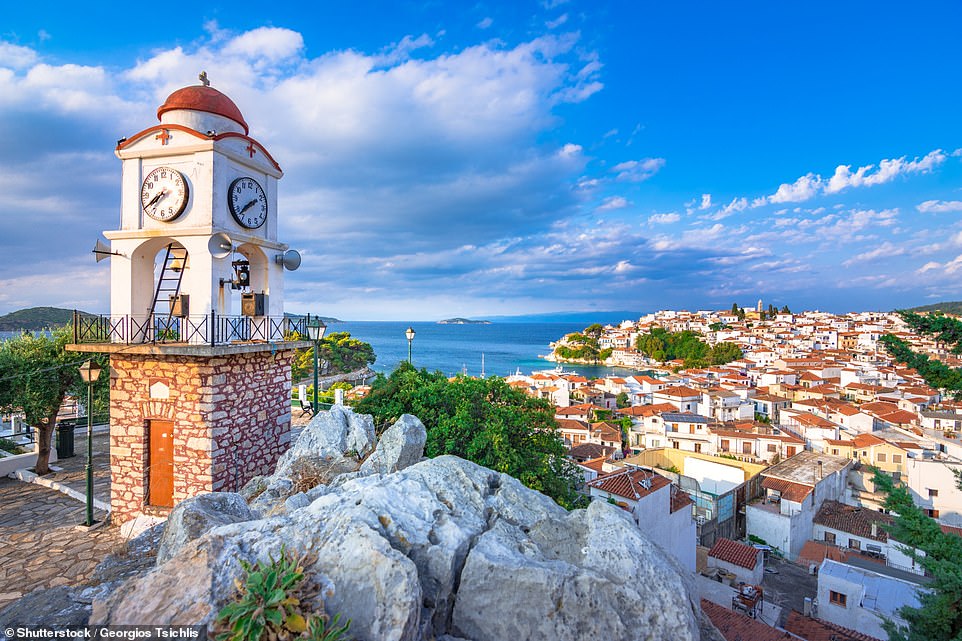 Tui said that 25 per cent of its bookings last week were for Greece with a noticeable uptick for islands such as Skiathos, pictured

He added that tour operators had to make decisions on flight charters so needed advance warning of changes to a country’s travel status.

For now, though, bookings are still coming in, particularly for late summer. The largest UK travel company, Tui, said that last week 25 per cent of its bookings were for Greece, with a noticeable uptick for islands such as Skiathos and Samos.

There are still deals available too. For instance, Olympic Holidays has more than £420pp off the price of a week in a four-star hotel on the island of Spetses, with flights leaving on July 3. It now costs from £961pp (olympicholidays.com).

The company’s managing director, Michael Vinales, said that bookings are significantly up since mid-February. He added: ‘There are some for June and July, but the majority are for August, September and October.

‘This certainly seems to fit with the news of a successful rollout in the Aegean.’

John Kerry on maskless photo: ‘If I dropped my mask to one ear on a flight, it was momentary’