Notre-Dame ablaze, a Mongolian nomad and a storm in Kansas: Stunning entries to the 2019 National Geographic Travel Photo Contest keep on coming

The judges of the 2019 National Geographic Travel Photo Contest must have furrowed brows.

That’s because entries to the competition continue to flood in and, as the latest batch below demonstrates, the quality is still superbly high. How will they decide on the winners?

There’s a dramatic shot of Notre-Dame Cathedral engulfed in flames, a stunning image showing a diver outnumbered by a shoal of fish in New Zealand and a powerful capture of a supercell storm unleashing its wrath in Kansas.

This sneak peek also includes a striking portrait of a Mongolian nomad dressed in traditional garb and a cute capture of two polar bear cubs high-fiving in Alaska.

Both budding and established photographers are encouraged to enter the competition, which is split into three categories: nature, cities and people. A grand prize of $7,500 (£5,700) is up for grabs, while first place winners in each of the groups will receive $2,500 (£1,900).

The competition opened on March 18 and National Geographic will be accepting submissions until May 31. You can read more about the competition and enter by clicking here. 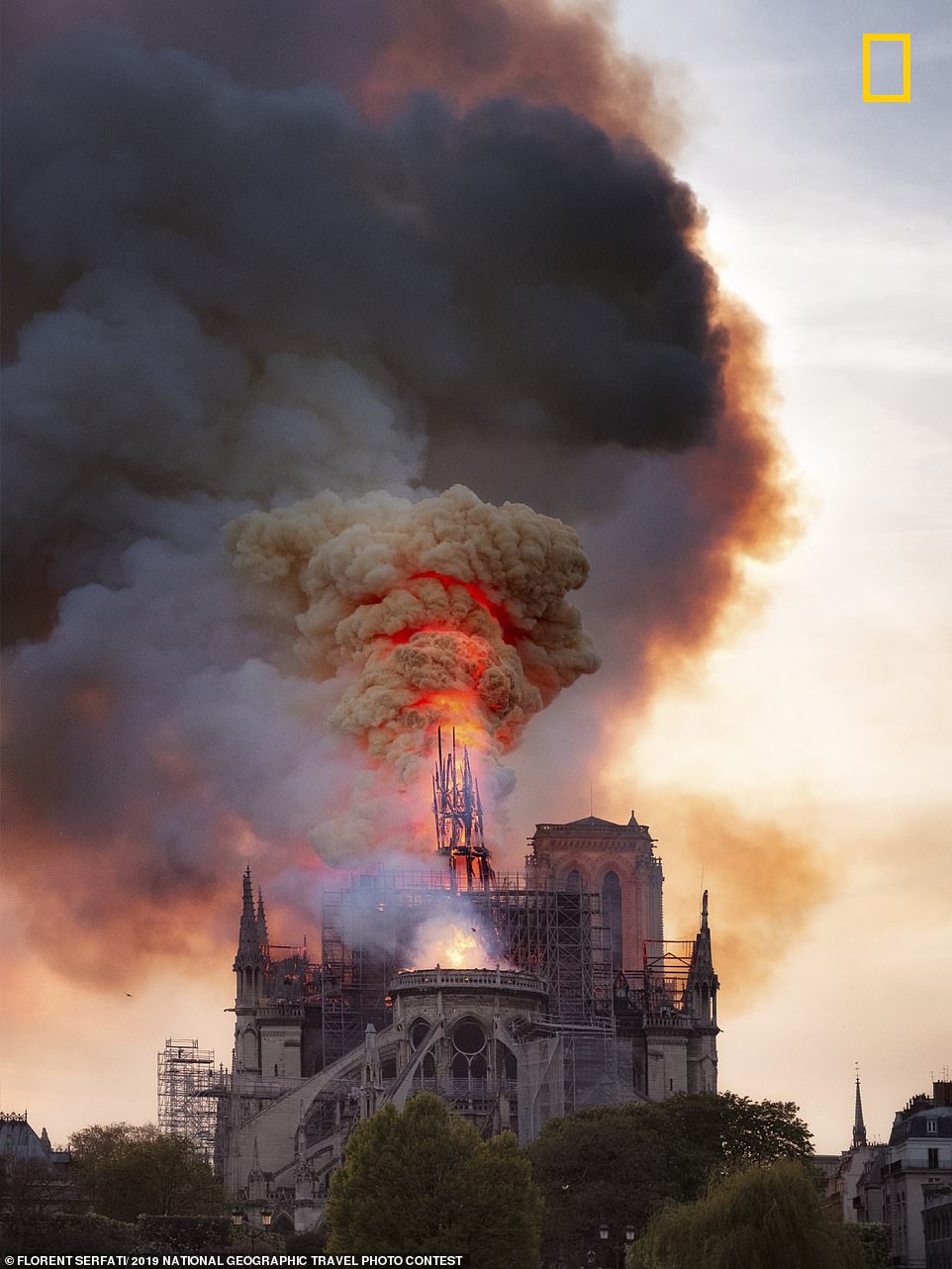 Florent Serfati took this dramatic shot of the April 15 Notre-Dame blaze. Recounting the moment, he said: ‘The flaming arrow had just fallen onto the structure below, creating an explosion’ 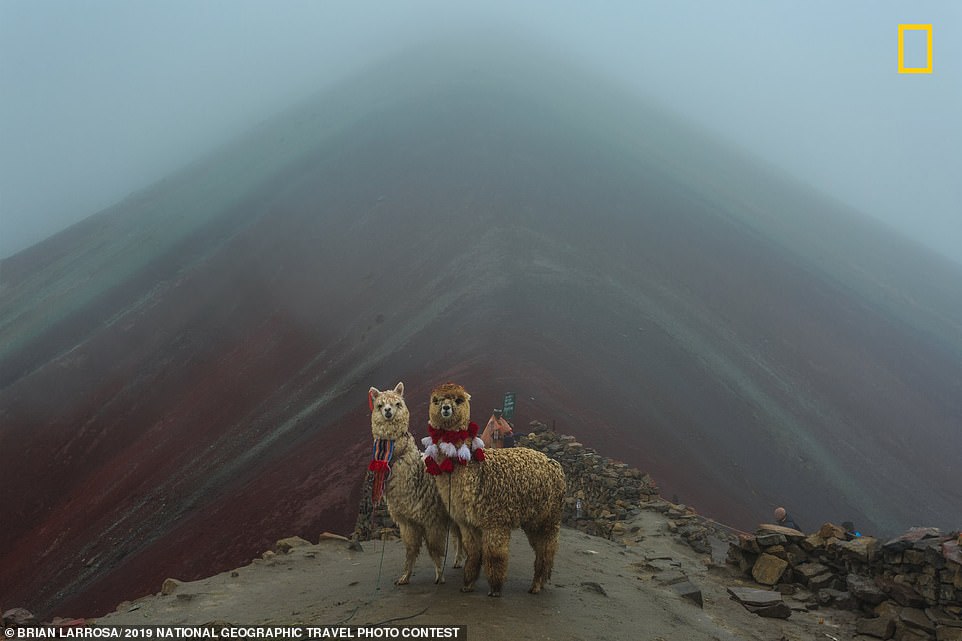 Instead of taking a bus tour of Rainbow Mountain in Peru, Brian Larrosa said he camped out the night before to be the first up at sunrise. Detailing his mini expedition, he said: ‘That morning was full of fog, and when I arrived, I could barely see the seven-color mountain. I waited an hour for the fog to clear, but it didn’t. On my way down, I passed this lovely alpaca couple wearing the Aymara culture colors – which made the wait worth it’ 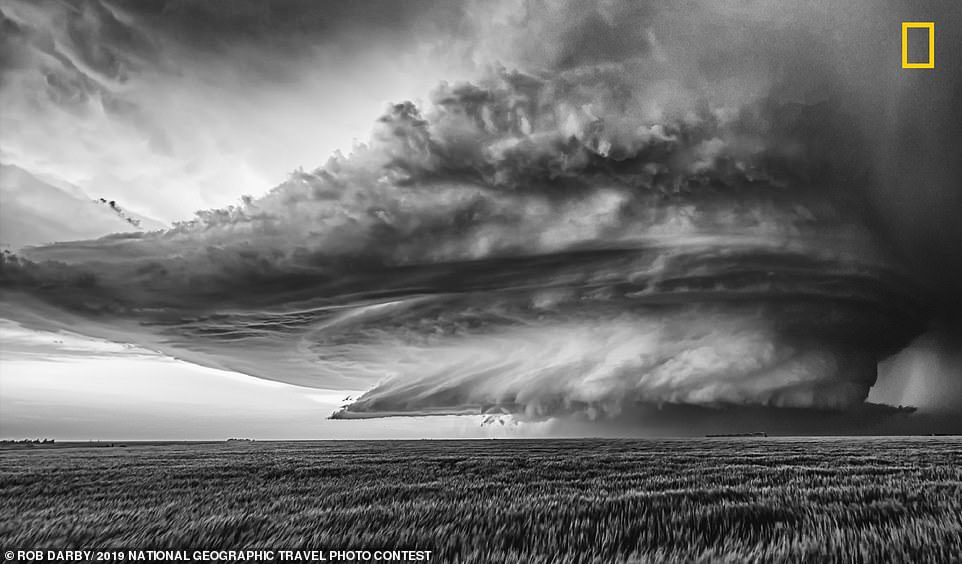 This incredible image of a dramatic supercell thunderstorm unleashing its rage in Kansas comes courtesy of Rob Darby. He said it was the most ‘photogenic’ storm he’d ever seen 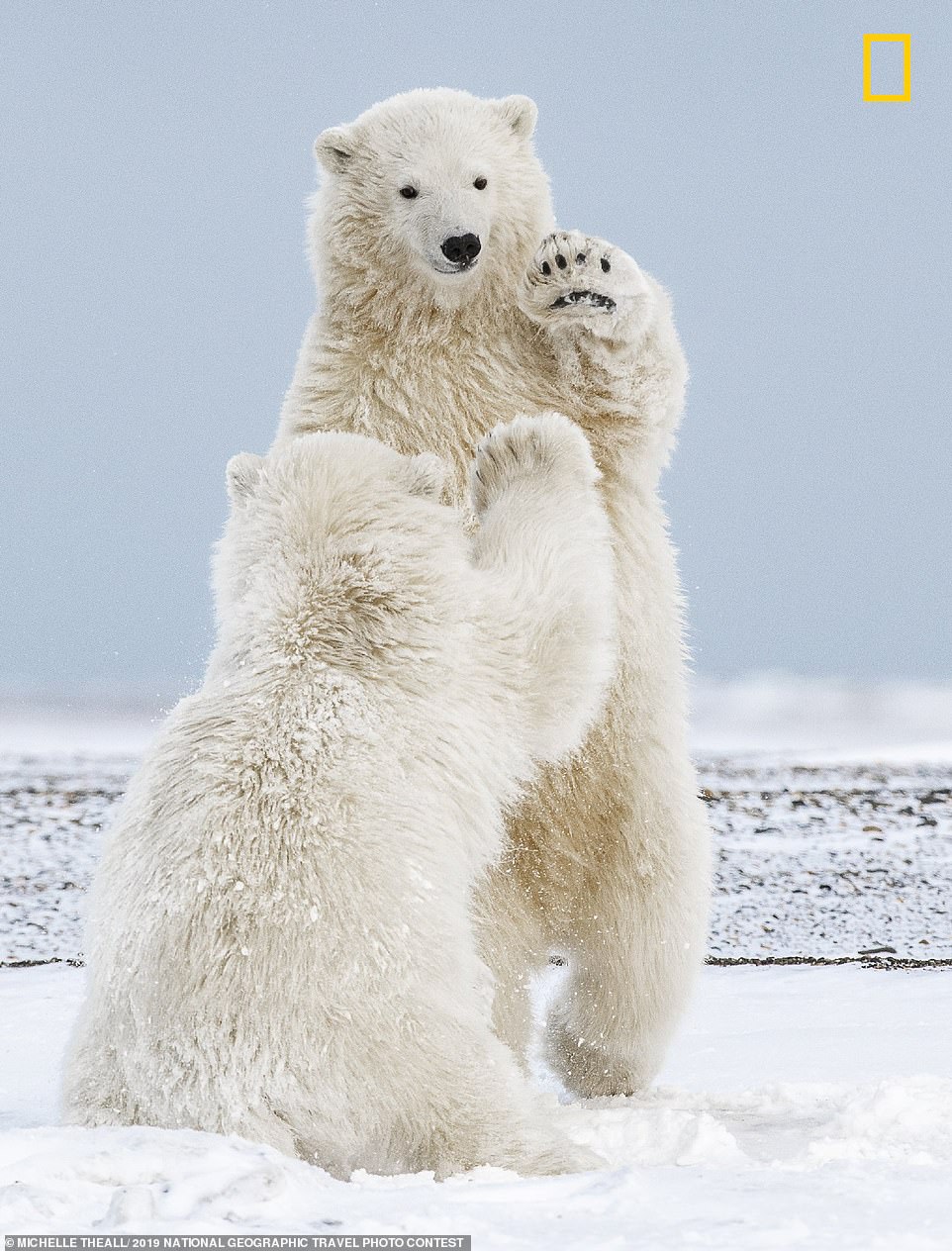 Michelle Theall said she rode an icebreaker along the Beaufort Sea in Kaktovik, Alaska, to capture these two polar bear cubs playing in the snow. She said: ‘I was fortunate to grab this high-five moment, among so many other favorites. It’s difficult to photograph the bears in snow at eye level on the ice and this close, because once the water freezes, the season is over for small skiffs. If you go too early, you only capture polar bears on dirt’ 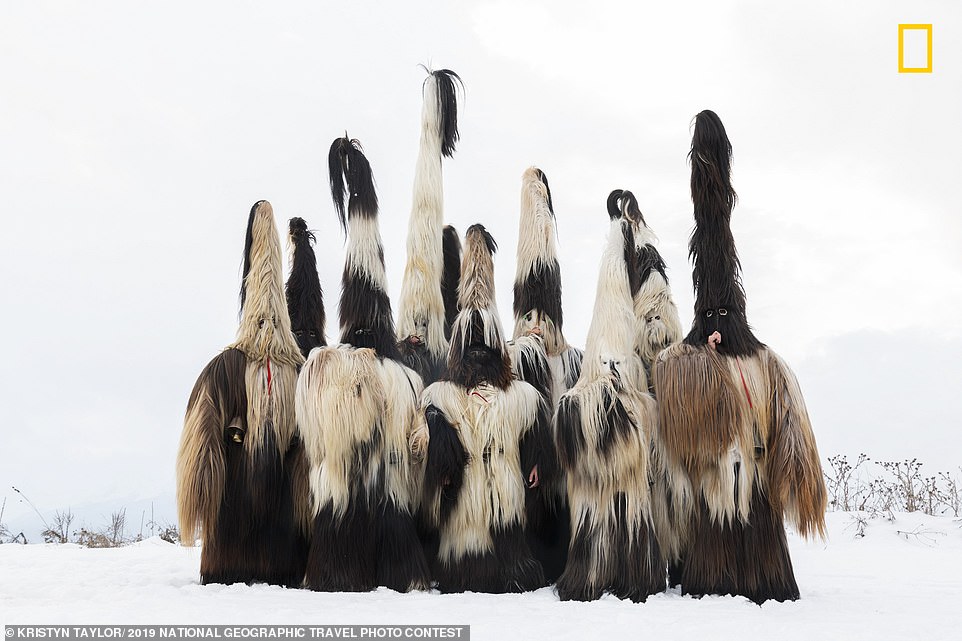 Kristyn Taylor took this image, which shows an ancient pagan festival held every year in Bulgaria, known as the Kukeri. Kristyn says ‘all of the members of the community get involved’ and they dress in traditional costumes made from goat hair’ 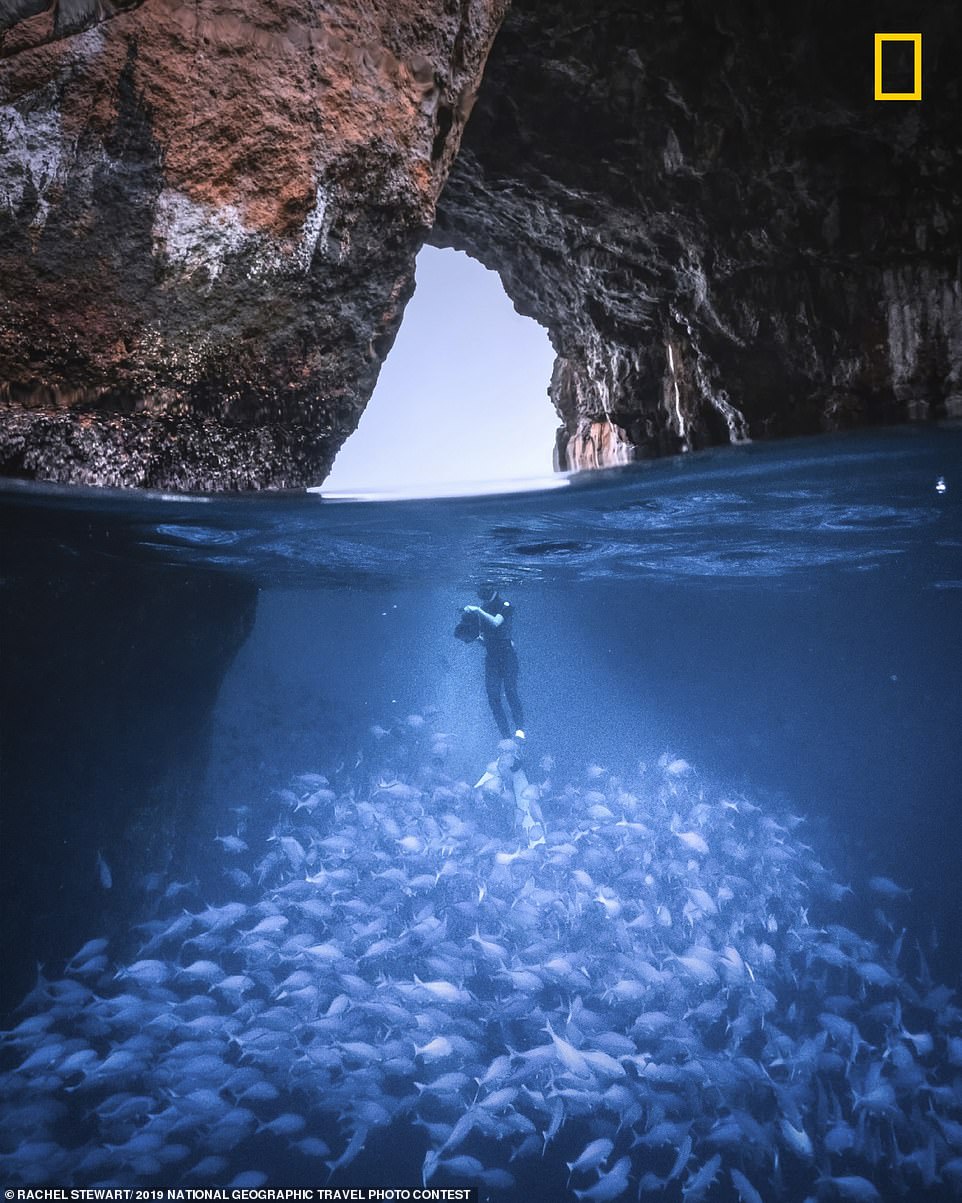 Rachel Stewart took this stunning shot of her best friend surrounded by a school of blue maomao fish. The duo were out diving around a marine reserve off the east coast of New Zealand in April this year when the scene presented itself. Rachel said: ‘With numerous caves, tunnels and an abundance of marine life, the Poor Knights Islands marine reserve is a haven for many underwater species. A reminder that more protection of our ocean is needed’

Alessandra Meniconzi took this striking portrait of a nomad while travelling in Mongolia. The photographer explains: ‘Nomads are constantly on the move. Some have a small house, but never spend more than few months [in it]. To settle is to deprive a nomad of their roots, their culture, and their freedom’ 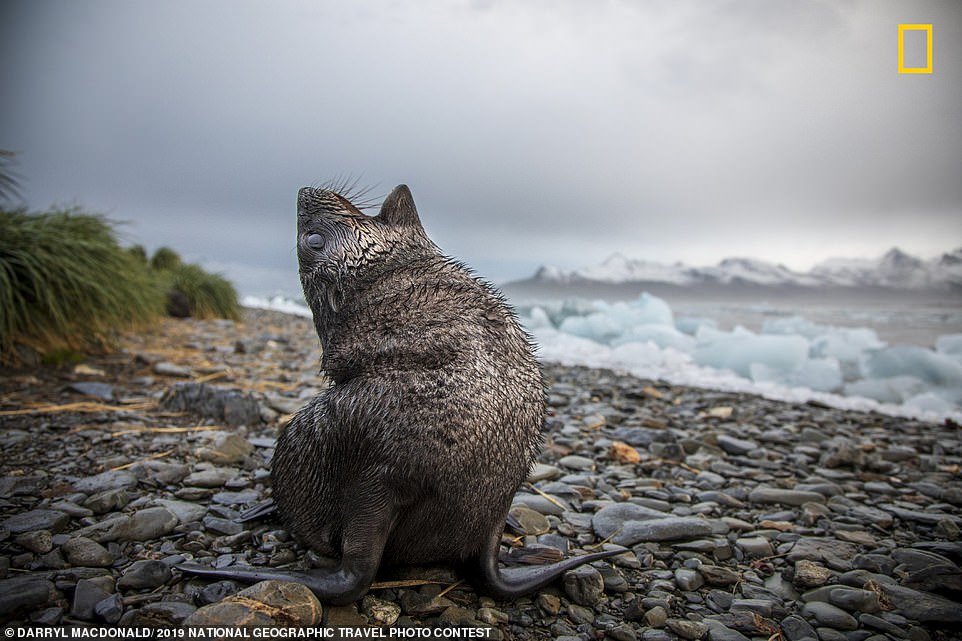 Darryl Macdonald took this shot of a fur seal pup yawning while visiting South Georgia. The image was taken at sunrise, while Darryl was out photographing chunks of ice. He said the area is one of the few places he has visited in his life that is ‘still truly wild’. The photographer added: ‘The density of the animal populations is staggering and while working on a research project there, I did my best to keep an appropriate distance from the animals’ 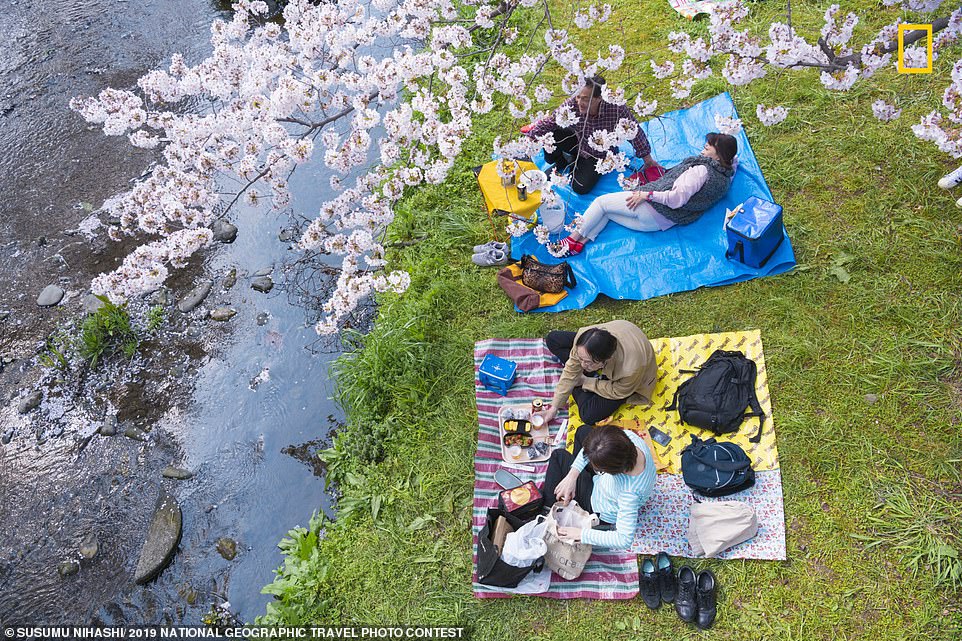 Susumu Nihashi took this photograph of people enjoying a picnic under a cherry tree while it was in blossom. The shot was taken by the Negawa River in Tokyo. The photographer explained that the Japanese love cherry blossoms and the waterway is a popular spot as the banks are lined with trees and they come into bloom during spring 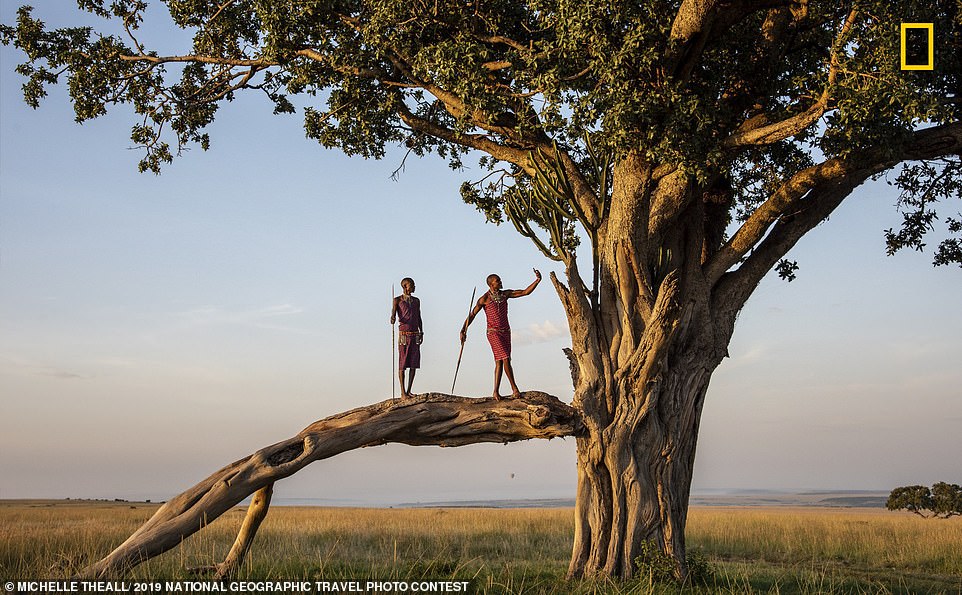 Describing this shot, taken in Kenya, photographer Michelle Theall said: ‘On safari in the Mara, these Maasai men were going to perform a morning dance for us, but before they did, I saw this man taking a selfie with his smartphone. It seems technology invades every space of our world’

Staycation road trips: What to avoid for tourists on the roads – ‘last thing you want’