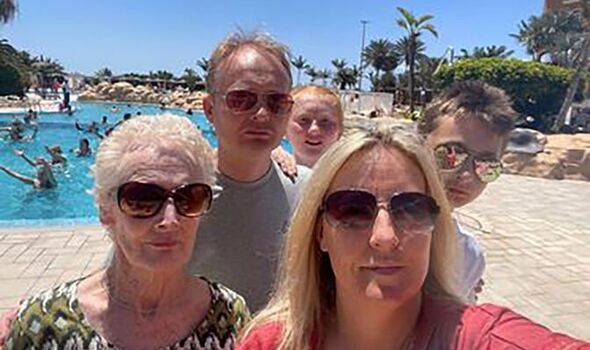 Emma Hayward, 44, her husband, two young children and elderly mother have been without clothes or essentials since they arrived on the Spanish island from Manchester Airport on Saturday. The mother claims she and her husband have already had to fork out €500 (£425) on new clothes, shoes, and toiletries – and still have no idea where their bags are or when they might arrive.

She’s made repeated attempts to contact Ryanair but claims she’s been told they can’t help as it’s Manchester Airport’s responsibility.

Speaking to Manchester Evening News from Spain, the mum of two said: “We always mix the luggage in our bags in case one of the suitcases goes missing, but we never anticipated all of them getting lost.

“At check-in because we had soft suitcases we were asked to put them on a conveyor belt in a separate area, which I’ve done before. Once we landed everyone else seemed to disappear so we thought they might be coming out through special luggage.

“We waited and waited but nothing came. We had to keep going to the Ryanair reps and eventually they gave us missing bag forms to fill out. We were told our bags were still in Manchester and they would be on the next flight. I said that wasn’t until Tuesday and they said they would try and fly them out from a different airport.

“I must have rung Ryanair 30 times and they keep saying it’s Manchester Airport’s fault. They said they have sent the airport a message but that they couldn’t get hold of them.”

Emma, from Cheshire, is now warning other holidaymakers to pack as many essential items in their hand luggage as possible, after she claims other people staying in her hotel have had the same issue.

Passengers flying back to Manchester on Sunday, meanwhile, saw “hundreds” of luggage left “abandoned” in the baggage halls as they waited hours for their own luggage to arrive.

And Emma says her experience, like that of many other tourists this week in and out of Manchester, has been disappointing. The family’s first holiday since the pandemic has particularly “been a nightmare” for Emma’s elderly mother.

“We are self-employed and the last couple of years have been hard. It’s just annoying that you can’t relax because having to sort the bags out is on your mind the whole time. My mum is a lot more careful with the kind of things she wears so it’s been a nightmare for her. It’s really not ideal at all,” Emma continued.

“I think our bags are just sitting somewhere in Manchester Airport but who knows if we’ll get them back. I can’t believe that Ryanair doesn’t have a contact number for them.

“We went shopping yesterday to get some clothes as we literally have nothing and have spent about 500 euros on that alone. We are going to have to go again today now as it’s a nice hotel and you can’t really wear the same thing you wear in the daytime in the evening.

“We’ve no idea if we’ll get the money compensated but I’m just trying to focus on getting the bags back. We are lucky that we can go out and afford to buy new clothes. Some people wouldn’t have spare spending money.

“Three other families at our hotel have also lost their bags as they had soft cases too. One of them has a young baby. I rang arrivals at Fuerteventura and asked if our bags were on the Tuesday flight and they said they weren’t.”

Issues relating to check-in and luggage are the responsibility of the airline and their designated baggage handling agent.

Ryanair conceded a “baggage belt failure” led to problems for a small number of passengers over the weekend.

A spokesperson said: “Due to a baggage belt failure at Manchester Airport (on May 28), a small number of passengers did not receive their checked baggage upon arrival in Fuerteventura. We are working with our handling agents at Manchester Airport to reunite customers with their baggage and sincerely apologise to customers for this delay.”

Qantas test flight from London to Sydney nonstop takes off

How Much Should You Tip Housekeeping If They Don't Enter the Room?