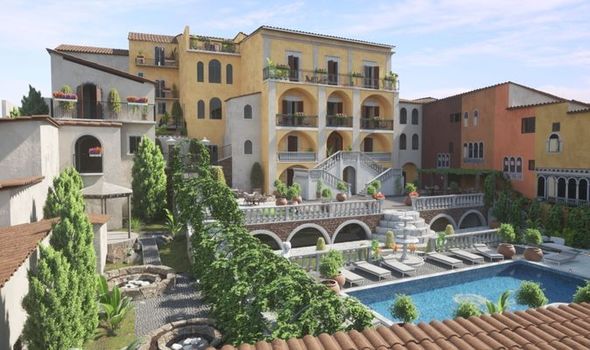 The beautiful Palazzo Ricci is situated in the medieval town of Casoli. Idyllic Casoli is located in the Abruzzo region of Italy, known for skiing, truffle hunting and picturesque landscapes.

Mike Brosnan, the founder of Viaggio Resorts, told Express.co.uk about how he first stumbled across the enchanting Palazzo Ricci.

He said: “In 2018, I was travelling with my family and we were doing an extensive tour through Italy.

“We were at all the tourist spots before Casoli – Venice, Florence and Rome which were amazing.

“But we fell in love with Casoli immediately. It was therapeutic for us to be in this really authentic, genuine area.

“People were so much more friendly, the food, the air, everything just felt so enriching.

“It was our favourite part of the trip, we were just in the little town constantly, discovering its history.

“As we were walking through the streets, we passed this one little Piazza, with this beautiful palazzo just sitting there.

“We could tell it was abandoned but you could just see it was the gem of the town’s historic district.”

Mike immediately made enquiries about the Palazzo, asking friends from the area for more information.

He told Express.co.uk: “They said ‘you know it’s probably for sale.’ And we found it was this incredible noble palace from this noble family and were completely enchanted by the idea.”

He discovered the 25,000 foot palace had been owned by the noble Ricci family who had built the palazzo on their land in 1799.

Mike said: “There’s a lot of history and some of the most famous artists and authors from the area visited the palazzo.

“It’s so exciting that there’s so much history playing out in Palazzo Ricci just in this one grand building.”

He said: “We’re doing the renovations very sensitively and our contractors are primarily used by the Roman Catholic Church in Italy. That’s because they have a special certification for preserving historic buildings.”

Palazzo Ricci will soon house 14 luxury residences, each owned by nine families who will be part of the private residence club. Apartments range from one bedroom to a beautiful penthouse with terrace.

Mike said: “Each owner will get a minimum of five and a half weeks at the property per year but that’s a minimum, some will stay for 10 weeks. You get a share in a beautiful property without bearing all the responsibility.

“It’s completely hassle free as unlike a holiday home, we’ll have full time staff from the bellhop to a cleaning team. That means the owners can just turn up and start enjoying the property.”

One of Mike’s favourite parts of Palazzo Ricci is the stunning grounds, which are only accessible from the property.

He said: “It’s pretty unusual in a dense historic district but the owners were able to maintain this beautiful garden area.”

Mike added that the local residents are really excited about the renovations, saying: “This old grandaddy building of Casoli is being restored and there’s a lot of support in the area.

“It’s also going to have a significant impact for the area in the sense of current and future jobs and I know the Palazzo Ricci owners are going to love Casoli.”

To find out more about Palazzo Ricci

5 ways to find a new-found love for Paris