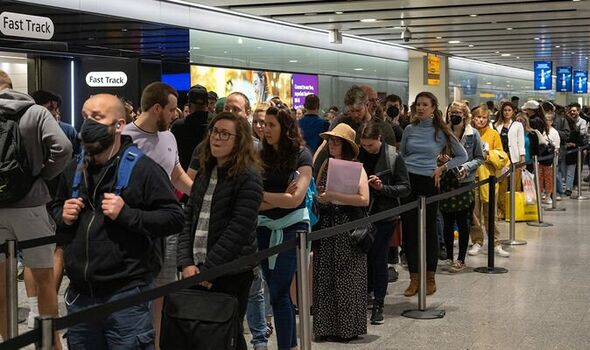 British tourists had to wait up to three hours to get through passport control in countries like Spain, as e-gates are no longer available for Britons after Brexit.

British passengers have to get their passports inspected manually and stamped by police upon arrival.

Long queues have been seen at airports such as Majorca, Alicante and Malaga.

This is while passengers from the EU get “preferential treatment” with an “EU fast lane” and using e-gates, according to social media users who shared their experience.

One is sealed off with black tape and a union jack flag labelled for “all passengers”.

The other queue, enclosed with green tape, has an Irish tricolour and EU flag and is labelled for “EU citizens”.

One British passenger explained: “Four hours queue in Malaga airport for non-EU passport holders, meanwhile everyone else walking on.”

Another one said: “We had a three-hour wait at Palma airport, with a very tired four-year-old in tow.

“‘Other passports’ no line.”

EU passport holders said on social media they got “looks that could kill” as they “sail through” while others queue.

“In less than a minute, we Irish passport holders were waived through with a smile.

“If looks could kill!”

Some pointed out that the best way to avoid this is by not visiting these countries.

Another one, Joanne Louise, explained: “Having been fortunate to visit Spanish territories twice recently, yes, we have to wait in long queues and our European cousins do not but that is what you get with Brexit.

“As for rudeness and dirty looks, not really.”

Paul Cosh added: “Let’s face it, the majority of EU countries will make it as difficult as they can for us because we voted out.”

15 of the Best Warm Weather Destinations to Escape the Cold

Over 1,500 Rare Turtles Left in Suitcase at Airport