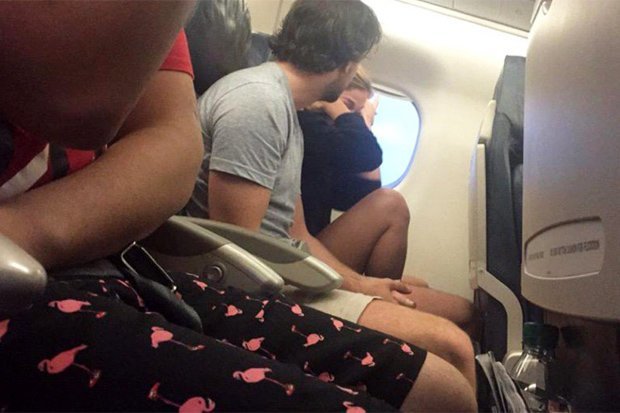 A holidaymaker captured the uncomfortable moment a passenger was dumped on a flight.

The awkward picture shows a newly single woman sobbing as she sits beside her ex.

After the picture went viral online, many were quick to brand the bloke as a “jerk”.

So what do you make of the situation?

A traveller from Montana, USA, snapped a picture of the feuding couple on a flight.

In the photo, a female passenger can be seen crying as a man looks on in concern.

The bloke, known only as Kevin, couldn’t resist sharing the bizarre image with his followers.

He tweeted: “Paid £5.99 for in flight wi-fi to tell you this guy just broke up with his girlfriend on the plane and she’s SOBBING.”

The image was first posted on Twitter in March – but it’s began circulating online again in recent days.

After the picture was uploaded to Reddit, it racked up 29,000 upvotes and hundreds of comments.

Even though the post has little context, many branded the male passenger a “jerk” for dumping someone in such a public place.

“Why would you want to break up with someone while you’re stuck next to them for hours?”

Another said: “That guy is a jerk.”

A third joked: “I guess you could say you were part of the mile sigh club.”

Other Redditors showed their sympathy for the female traveller by recalling similar incidents.

A commenter remarked: “My wife has a story about how she went on a European trip with her boyfriend at the time and he broke up with her halfway through the trip.

“Was a dumb decision on his part because my wife had made all the accommodations and was like ‘OK, well, f*** you’ and suddenly he had nowhere to stay for the rest of the trip.

“He figured something out as he showed up for the flight home but she has no idea what he did.”

A second remembered: “This is basically my last relationship, we broke up like every month or so for 3 years.

“Finally on vacation in the Dominican Republic we broke up in the hotel room on night 3 of a 7 night stay.

“We reconciled to have a decent time and re-approach it when we got back.”

Another commented: “I feel your pain. I was broken up with half way through a romantic Paris holiday.

“A whole city was ruined for me!”

Where to go on holiday in April

Where to Go Backcountry Skiing in New England

What was the summer of love?