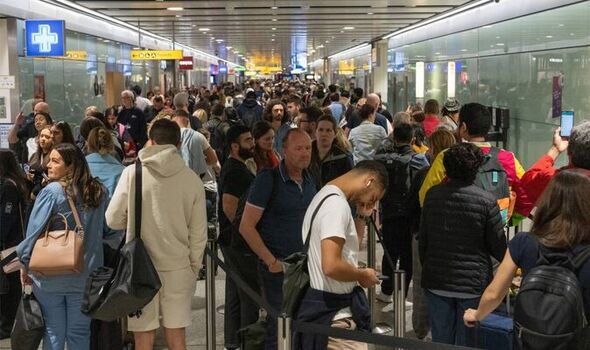 And Mr O’Leary recommended flying mid-week instead of the weekend to beat the queues. He said: “This problem is going to continue, particularly at airports like Heathrow and Gatwick, right throughout the summer.

Staff shortages are plaguing air traffic control, baggage handling and security and, despite having many months to recruit new workers, airport and airline bosses have failed to do so.

Critics say the industry sacked too many workers during the Covid lockdowns.

“There are hundreds of thousands of jobs in the UK that, frankly, British workers don’t want to do,” he said.

Around 99 percent of Ryanair flights are taking off as planned – and Stansted customers are having the easiest time of it.

However, it’ll be a “struggle through the summer”, with no clear end in sight, he admitted.

Around 40 per cent of Ryanair flights were delayed last weekend by air traffic control issues and baggage handling delays.

Scores of holidaymakers were pictured battling massive queues at Manchester on Tuesday while flyers at Heathrow complained about the ‘evident luggage chaos.’

Heathrow and Gatwick managers have told airlines to cancel thousands of flights this summer as they fight to regain control.

EasyJet has axed 10,000 flights to European holiday hotspots including Greece, Italy and Spain from July through to September.

It comes after the former boss of British Airways said Heathrow is ‘not capable of delivering the basic product they are due to deliver.’

At the annual general meeting of the International Air Transport Association in Doha, its director-general Willie Walsh said of Heathrow, Schiphol in Amsterdam and Dublin: “It is interesting that the three airports I mention in terms of significant charging increases are also the three that have experienced the most disruption in recent weeks.”

“It really does lead you to question the management executives of these airports that are not even capable of delivering the basic product they produce.

“I will continue to call on these airports to get their acts in order.”

EasyJet’s chief executive Johan Lundgren saying he was ‘disappointed’ that Gatwick was unable to offer its full schedule of slots.

He added: “We are supportive that some airports are coming out and proactively capping the numbers because they have something we don’t have: visibility across the whole operation.”

“They are better equipped to judge the difficulties around air traffic control, ground handlers and so on.”

“It’s disappointing but we’d still rather they are realistic about what they can deliver so we can adjust ourselves to that.”

Simon Clarke, Chief Secretary to the Treasury, said it’s ‘sensible’ that airports are ‘revising their schedules’ because it will prevent a repeat of the ‘terrible scenes’ passengers have been experiencing.

He told Sky News: “What we’re seeing here is a result of the airline industry having massively contracted during the pandemic and now it’s facing this surge of pent-up demand as things stand back up.”

“It isn’t resourced and manned for that challenge and that’s why I think it is sensible that we’re starting to see some of the airports revising their schedules for the summer season ahead.”

“Frankly, we can’t have a repeat of the scenes we’ve had in some of our airports in recent weeks.”

How to Plan the Family Vacation of a Lifetime