Home » Travel » Fez guide: How to get the most out of Morocco's oldest imperial city

Hats off to 48 hours in Fez! How to get the most out of Morocco’s oldest imperial city in just two days, from huge markets full of treasures to lush gardens and sumptuous hotels

If you’re in the mood for a magical trip, look no further than Fez.

From dining out on delectable street food to bargain-hunting in the vast lost-in-time medina, Ali Pantony reveals the ultimate guide to 48 hours in the ancient imperial city…

Bab Bou Jeloud, the impressive entrance to Fez’s ancient medina, which is decorated with tiles and geometric motifs

Morning: Wake up to the traditional and luxurious surrounds of Riad Fes in the heart of the medina, with its towering pillars of hand-carved plaster, intricate tiles and jewel-coloured velvet furniture. Wander around the 18th Century hotel, through its palm-filled courtyards flanked by lemon trees and fountains, and up its marble staircases to the rooftop bar offering 180-degree views of the medina. After a buffet breakfast at Restaurant l’Ambre, step outside into Fez’s old town where you’re a mere stroll away from the medina, said to be the largest in the world.

Afternoon: Most of the medina is closed on Fridays, so Thursday is an ideal day to explore. The dense warren of Fez Medina is like stepping back in time – no cars, just donkeys and shopkeepers carting around their goods. You’ll want to spend a few hours getting lost in the colourful, chaotic jumble of more than 9,000 spice-scented alleyways, brimming with shops and traders. Look for trendy carpets and rugs (prices depend on factors such as whether it’s hand- or factory-made; uses natural or chemical dyes; and most importantly, your haggling skills), ceramics, lanterns and leather goods. Book a medina tour if you don’t fancy getting lost (try plan-it-morocco.com). Ask to try some typical Fassi street food – particularly the tiny stalls serving ‘bissara’, creamy bean soup served with hunks of warm, fresh-from-the-oven bread and drizzles of olive oil – and to see the Chouara Tannery, where leather is produced using ancient processes. Do your shopping after the tour, though, so you don’t have to pay the guide’s commission. 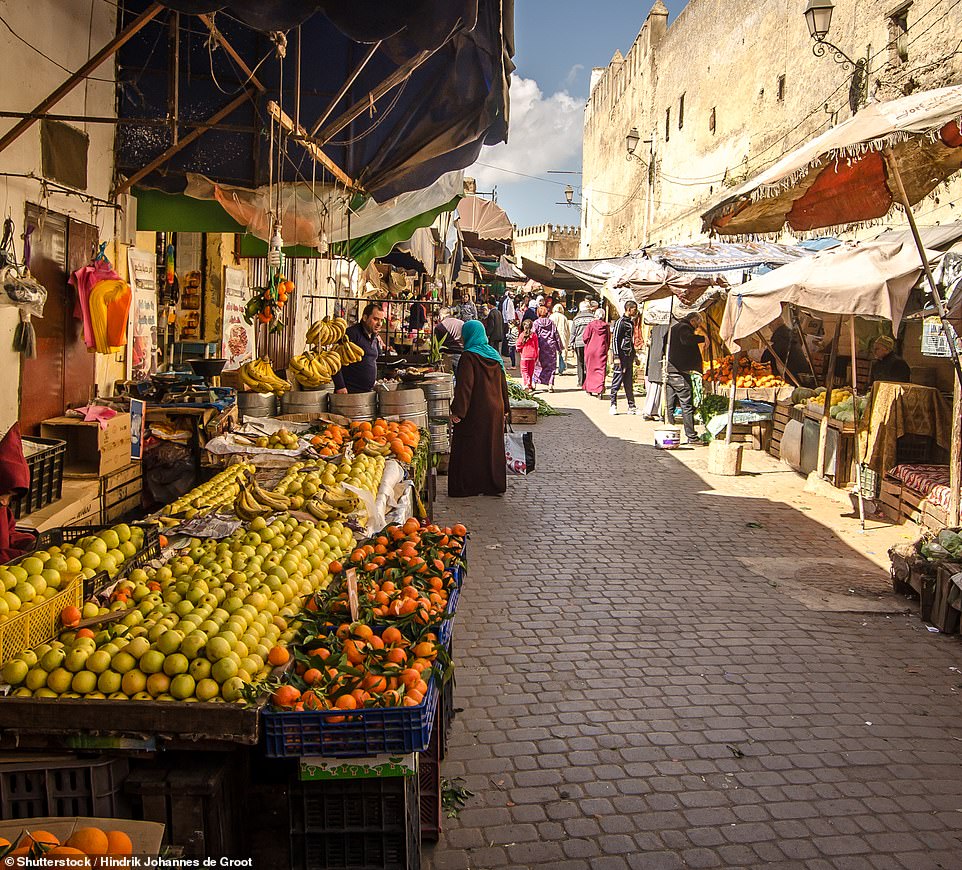 ‘The dense warren of Fez Medina [pictured] is like stepping back in time – no cars, just donkeys and shopkeepers carting around their goods,’ writes Ali 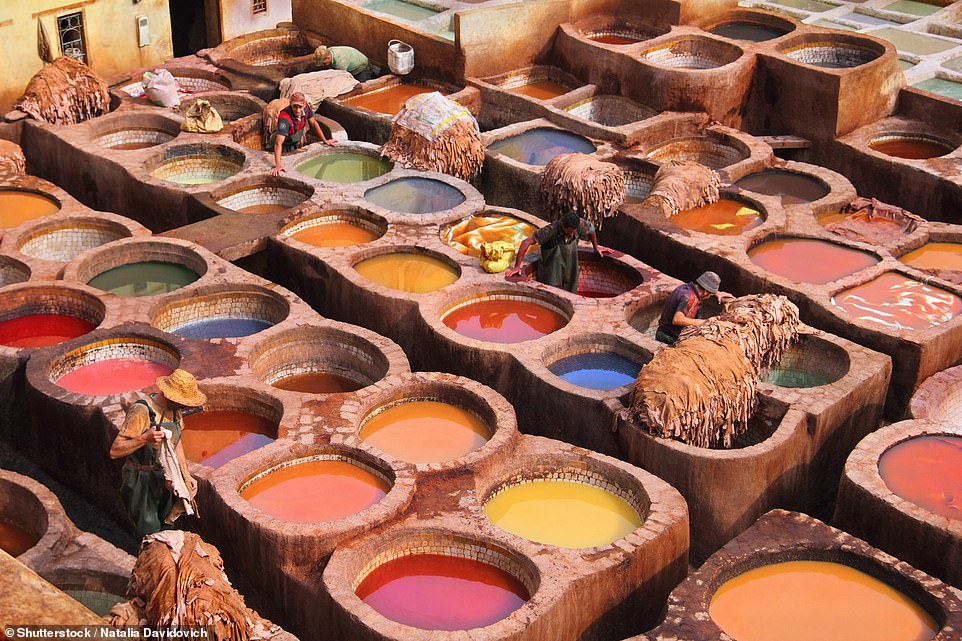 Evening: Head back to Riad Fes and arrange for a car to check in to its sister property, Hotel Sahrai. This boutique hotel offers space, modernity and calm after the commotion of the old town. Perched on a hilltop above the new town (in a city as ancient as Fez, ‘new’ is 700 years old), make for the stylish Jungle Bar, which offers sprawling views over the city stretching to the Atlas mountains, for an aperitif before dinner.

For dinner, choose between continental cuisine at Relais de Paris Restaurant (a starter of breaded goat’s cheese with sauteed spinach and honey from the Atlas mountains was a highlight), or typical Moroccan fare at Amaraz Restaurant – don’t miss the tajine de lotte et gambas, spice-rich tagines filled with prawns and burbot fish, tomatoes, olives and lemon.

Morning: After breakfast, where you should try the ‘melawi’ and ‘baghrir’, Moroccan pancakes cooked two ways, head to the hotel’s marble-clad spa which is the only Givenchy spa in North Africa. Try the 60-minute traditional hammam treatment, involving a purifying full-body scrub using Moroccan kessa gloves in a steamy massage room, which is washed off before your body is stretched and soaked with moisturising balms and essential oils. Afterwards, sip a mint tea and relax by the palm-lined, L-shaped infinity pool. Try a local centuries-old hammam at Ain Azleten Hammam, Hammam Mernissi or Hammam Rihab in old town. Check opening times though, as many open early for men, later for women.

Afternoon: Grab a map from the hotel and start the afternoon with a walk around Jardin Jnan Sbil. These lush gardens just outside the medina were planted more than a century ago, but extensive renovation has restored this area to a verdant green oasis. 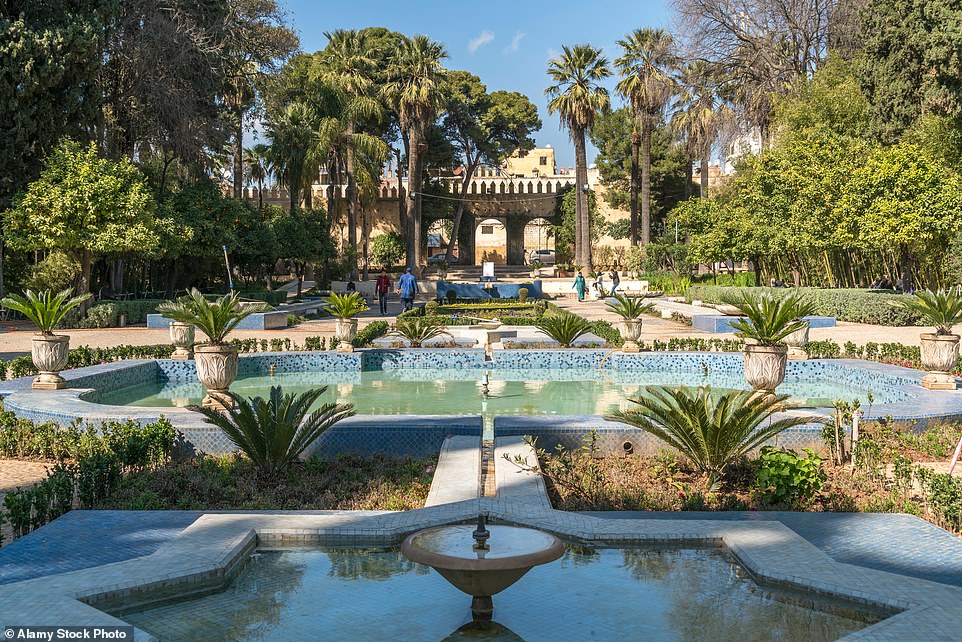 Green oasis: The verdant Jardin Jnan Sbil right outside the medina. The gardens were planted more than 100 years ago 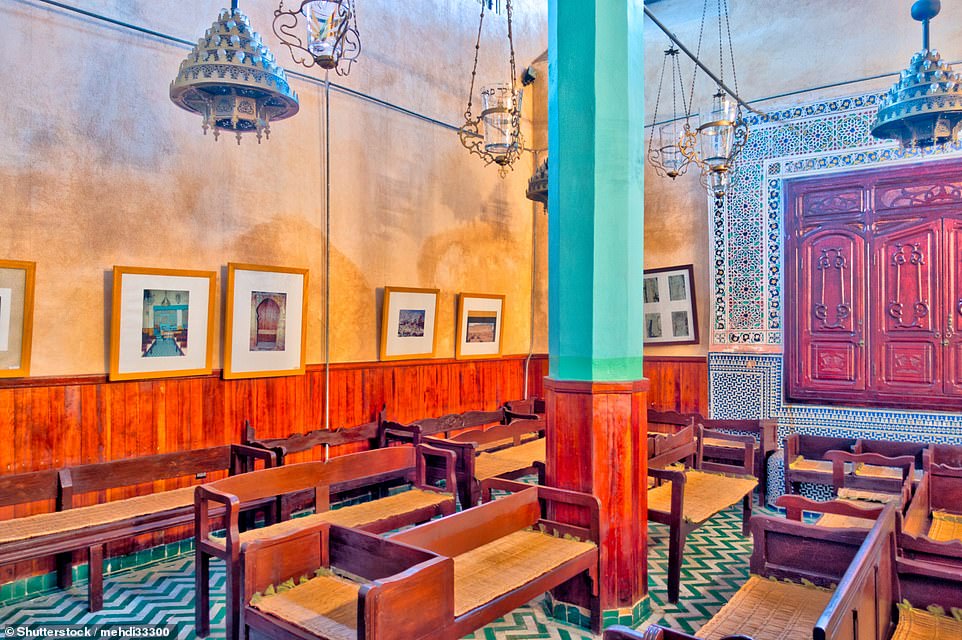 Ali recommends squeezing in a trip to the Synagogue Ibn-Danan, pictured, during a two-day getaway in Fez

Ali Pantony was a guest of Relais & Chateaux, where Riad Fes rooms are from £190 (riadfes.com) and rooms at Hotel Sahrai from £160 (hotelsahrai.com). Direct flights with Air Arabia land late – at about 11pm – on Wednesday evenings. Flights from Gatwick to Fez with Air Arabia cost from £30.

Stroll through the leafy trails, rest on the benches shaded by towering palms and poplar trees, and snap photos of the impressive lake, fountains and ancient water wheel. For sustenance, head to Mezzanine Lounge with views over Jnan Sbil for a cold local beer and some Moroccan-inspired tapas.

From here, you can walk to Bab Bou Jeloud, the immense entrance to the medina which you may have missed on day one. The triple-arched gate is covered in beautiful tiles and geometric motifs, with its outer facade a deep royal blue and its interior predominantly bright green. Also worth an explore is the historic ‘mellah’ – the Jewish quarter – created in 1438 by Sultan Ar Rashid, when Fez new town became a refuge for some 250,000 Jews.

Don’t miss Rue des Merinides, the area’s most architecturally diverse street, lined with old houses featuring ornate wrought-iron balconies. You could also visit the Synagogue Ibn-Danan, the Jewish Cemetery, or the nearby entrance to the Royal Palace.

Evening: On the final night, enjoy dinner at Dar Roumana, a five-room riad where chef Younes Idrissi creates seasonal Franco-Moroccan dishes from local produce. The intimate dining room in the riad’s candlelit courtyard makes a romantic setting, bright with blue and white tiles, with a few tables around a central fountain. The menu is constantly changing but recent dishes include a fresh beetroot, pear and local goat’s cheese salad and seared ombrini fillet (a delicate white fish) with a saffron, prawn and crayfish sauce on a bed of green veg.