Fairways to heaven! A golf tour in Northern Ireland is a chance to see the country in all its glory

Northern Ireland is often regarded unfavourably by many outsiders because of its deep-rooted political and sectarian troubles.

The murder in April by the New IRA of Irish journalist Lyra McKee – and subsequent threats against anyone helping police to identify who shot her – was another blow to its international reputation.

So the decision to stage the next Open Golf Championship there, from July 14-21 – the first time since 1951 – is a great boost to local morale. It’s also an opportunity for the outside world to see the Six Counties in a positive light. 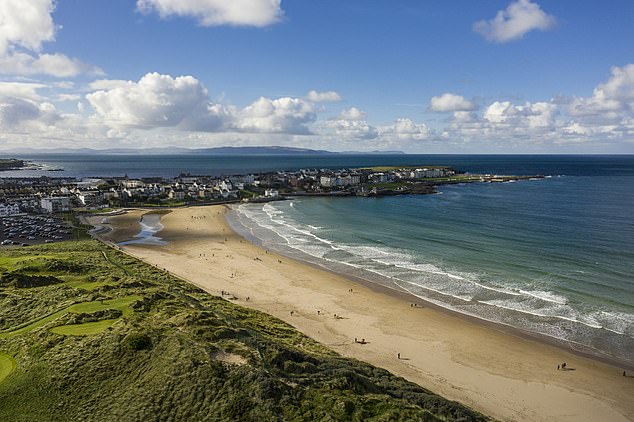 Fantastic venue: Views of Portrush Town, the coastline and the golf course

Reaction has been enthusiastic and tickets for the event at Royal Portrush Golf Club sold out some time ago.

Northern Ireland’s Rory McIlroy, who won the Open’s Claret Jug at Royal Liverpool in 2014, says: ‘Royal Portrush is one of my favourite golf courses in the world. I think it will be a fantastic venue.’

I’ve been to Ireland many times, but never to the North. Ulster folk have a reputation for truculence – ‘The first to take offence; the first to cause offence,’ is a cynical remark I’d heard more than once in London.

But over a four-day golfing trip, I never encountered this supposed character deficit. Indeed, the people were noticeably more polite and cheerful than those I encounter in London and Oxfordshire. 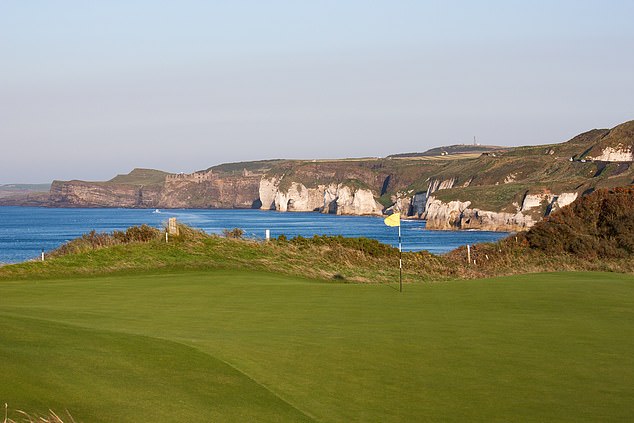 Challenging: The greens of the Royal Portrush courses are spectacular but unforgiving

After overnighting in the ultra-modern Ten Square Hotel in Belfast city centre, we played 18-hole Belvoir Park Golf Club, an exquisitely designed, maturewooded course which is so close to downtown that Harland & Wolff’s giant shipyard gantry cranes, Samson and Goliath are visible from some fairways.

After lunch at the club visited Titanic Belfast at the docks, a moving, cleverly staged exhibition devoted the doomed ocean liner’s final hours over a century ago. more poignant experience than the film, oddly.

Outside, an elderly Japanese couple were helped by friends to clamber onto a model of the liner’s bow. There they sought with great dignity to reproduce Leonardo DiCaprio and Kate Winslet’s movie pose.

Afterwards, we strolled to nearby Games Of Thrones: Touring Exhibition. Having never watched the TV show, it didn’t mean much to me, but those who had were fascinated.

The exhibition staff explained the costumes, weapons and other series artefacts in what I felt was an appropriately-jokey-while-respectful tone. 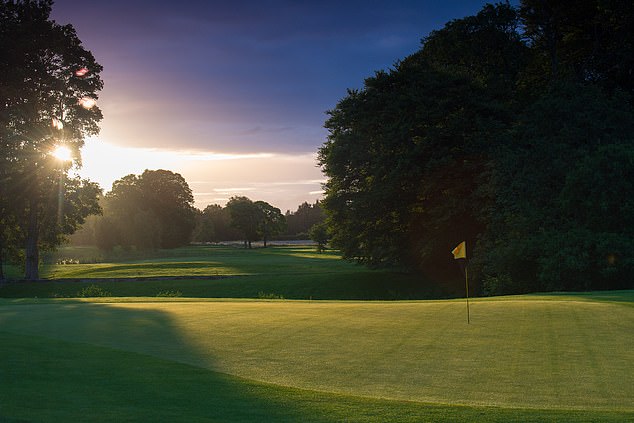 Delightful: Sunset on the green at Galgorm Castle’s fourth hole

Our next 18 holes the following day was at Galgorm Castle, Ballymena, home of the Northern Ireland Open, one of the finest parkland courses in Ireland. A delightful walk in the park (followed by lunch) compared to our afternoon holes – at the spectacularly hilly, Strand links course at Portstewart, close to the Giant’s Causeway World Heritage site.

We teed off behind three teams of women. While we struggled up and down vertiginous slopes, hunting in the unforgiving gorse for our balls, they forged ahead. They were long gone from the course by the time our exhausted foursome staggered onto the 18th.

After playing 36 holes in one day, we dined and slept at the delightful Bushmills Inn Hotel, a former coaching inn near the world’s oldest whiskey distillery.

Next day, we faced another challenge – playing at the 7,317-yard Dunluce Links, Royal Portrush, in front of workmen and officials setting it up for the 148th Open Championship. 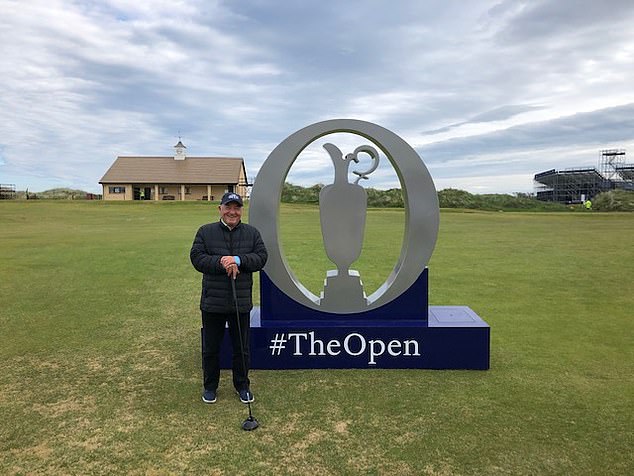 Peter McKay at Royal Portrush, which has been described as a masterpiece of golf architecture

It’s described as a masterpiece of golf architecture. The club boasts: ‘Unimaginable rough and testing greens, combined with the unpredictable weather of the roaring North Atlantic, make this course an admirable test for even the most seasoned golf aficionado.’ We aficionados (not!) enjoyed delightfully sunny weather. And the North Atlantic for once declined to roar. Yet we were tested to the full. I was glad the stands erected for spectators – especially the giant horseshoe one at the 18th hole – were empty of witnesses to our course criss-crossing progress.

How Open contestants handle the ravine-spanning, 236-yard, par-3, 16th, known as Calamity, will be something to watch on TV. My second drive (the first sailed into the ravine) crossed the 180-yard ‘carry’ beautifully, bouncing off the bank to the left of the fairway and rolling onto the green. Alas, I took three putts to hole, meaning I was down in a miserable six on a par three hole.

Northern Ireland publicises itself as Made for Golf, listing no fewer than 95 courses. And while the Open is sold out, why not just be there for this great occasion, soaking up the atmosphere and enjoying the big screen TV coverage in Belfast’s great pubs? And all golfers should make a point of playing at Royal Portrush before they retire permanently to the 19th hole.

Inside the spectacular Amalfi Coast where Princess Beatrice got engaged

Ruler of the waves: From Singapore to Phuket on Star Clipper