Egypt’s ancient – and modern – wonders are endless, so the trick is to choose carefully and… join a pyramid scheme!

Our first experience of Egypt was hearing Taylor Swift’s song We Are Never Ever Getting Back Together playing in the car that collected us at 3am from Cairo airport.

For some unfathomable reason, the British Airways flight to the Egyptian capital arrives at this uncivilised hour but at least it meant that we arrived at our hotel, Giza’s Mena Palace, in good time, as opposed to crawling through the usually gridlocked traffic.Alex

A swaying palm and billboards flashed past but other than that, we could have been on any highway in the world. 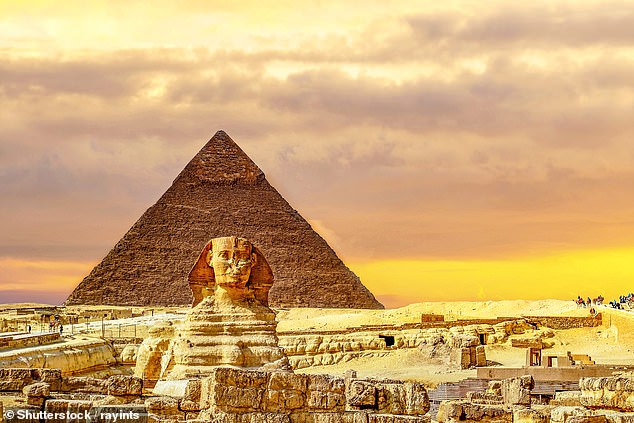 Not so the next morning, when we stepped outside the hotel to see the Great Pyramid glinting in the sun – as incredible a sight as one might ever have imagined and yet also strangely familiar.

My boyfriend David and I are different kinds of holidaymakers. For him, each day should be a voyage of discovery. He spends hours planning things, his favourite quote being the unattributed: ‘Time spent in reconnaissance is seldom wasted.’

In contrast, I’m happy with a comfortable hotel, somewhere to swim, a lounger and good food. Egypt, we thought, would tick all the boxes.

The country is trying to re-establish itself as a safe holiday destination after the upheavals in the wake of the Arab Spring and subsequent terror attacks. As a consequence, now is an excellent time to visit, with many fabulous historical sites luxuriously empty.

However, it is not a place for freestyle roaming and it is hard to travel outside the aegis of a group or an established private guide. The security everywhere can, at times, feel oppressive.

We had decided on a three-stop holiday, starting with Giza before heading south to Aswan and returning home via Luxor.

After a day to acclimatise around the elegant pool, we drank cocktails on the hotel terrace. So we were in good form for an early start on the pyramids the next day.

As with Stonehenge, there are many theories about how these extraordinary resting places of the pharaohs were built but whichever one you subscribe to, it is likely the huge blocks were transported from the Nile via canals. 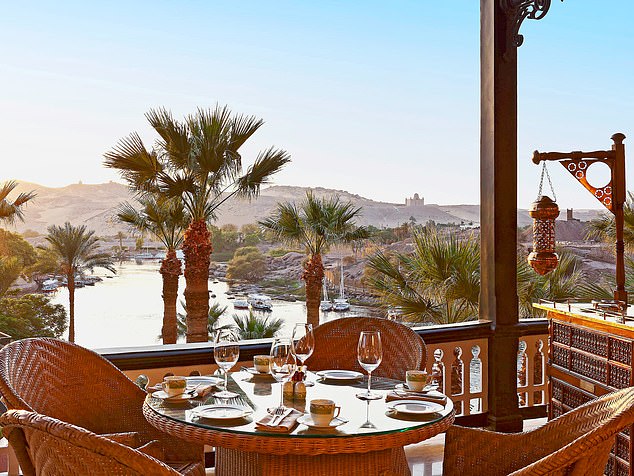 The view from the Old Cataract in Aswan, which was made famous by Agatha Christie’s Death On The Nile

A short distance from the Great Pyramid is the reconstructed barge made from planks of cedar and linen ropes which transported the pharaoh Khufu to his final destination, and nearer the base of the plain lies the Sphinx. Like famous film stars, the Sphinx is smaller than one imagines but with the extraordinary face of implacable androgyne beauty that has led to its name becoming a byword for unknowing inscrutability.

Because I find flying stressful, we decided to take the ten-hour sleeper train from Cairo to Aswan. That way we would also have a sense of the changing landscape, something one misses from the air. At the station, a seemingly impossible number of people crowded on board various trains, hanging out of the doors as they moved off.

I confess I was relieved when our own train arrived, with each carriage allocated a guard who established us in our room.

The cabins have exactly the same design as a sleeper from London to Dundee and comprise bunks, a small washbasin and a coat-hook. There is just enough room to stand, so this is not the place to bring several large suitcases. 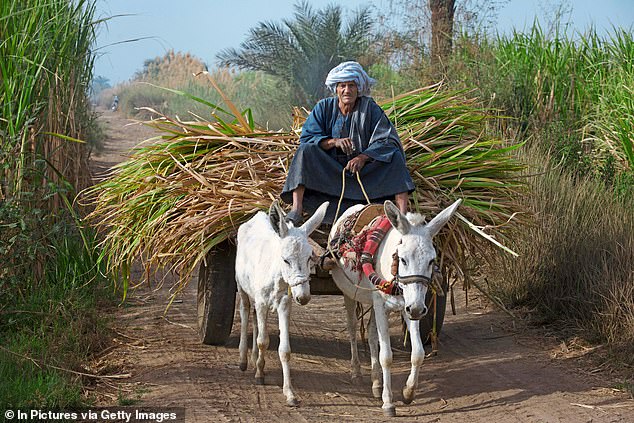 A local travels home on his donkey-drawn cart near Qurna, a village on the West Bank of Luxor

Shortly after departure, dinner was served: a plastic tray containing a chicken dish, rice and a bottle of water. I would advise bringing your own picnic.

We had a moment of excitement on learning of the existence of the glamorous-sounding Club Car, which I had visions of providing a gin and tonic and leather armchairs. Instead, we discovered it was a smoking carriage where the only drinks on offer were tea and water, and I was the only woman in the place. It was a reminder that outside of a hotel, Egypt is essentially a dry country, bar the odd beer served occasionally in a restaurant. It was also the first, but not the only, time I felt an underlying discomfort at adopting the behaviour of a Western woman in a country which is primarily Muslim with traditional codes.

Although women were allowed at the bar, there was a sense that my presence was not that desirable.

At daybreak, I parted the blinds to discover startlingly beautiful emerald fields and irrigation canals that border the Nile. Men in colourful turbans and long gowns were already in the fields cutting sugar cane and scything bull rushes. It was a sight of biblical beauty: peaceful and timeless. 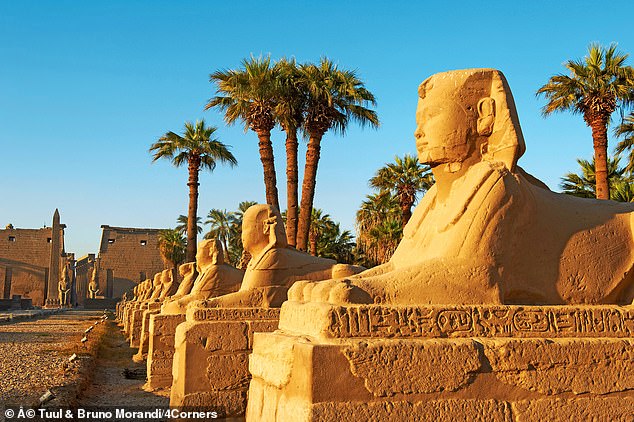 Avenue of sphinxes: The extraordinary entrance to the Temple of Luxor

Drawing nearer Aswan, the fields gave way to homesteads with straw roofs and ironwork windows falling from their hinges.

In Aswan, we stayed at the Old Cataract hotel made famous by Agatha Christie’s Death On The Nile. Seated on a plantation chair on the terrace sipping a gin fizz and looking out at the huge, smooth animal-shaped boulders that gave Elephantine Island its name, all was right with the world.

At sunset, we took a felucca to sail around the island, and the next day we hired a small motorboat to meet the camels that would take us up to a deserted monastery high on a hill.

Camel-riding was not my forte. Let’s just say that climbing on to their bony backs as they knelt down and then clinging on for dear life as their long wobbly legs adjusted to the upright position was not a favourite moment. However, I got into the swing of it eventually and was able to enjoy the stark landscape stretching out before us.

Don’t forget to bring binoculars – there are so many extraordinary long-distance vistas across the desert, and wonderful details high up in giant structures of the archaeological sites. And the Nile is home to a huge variety of birdlife – kingfishers, plovers and herons all snuggle happily in the vegetation.

For anyone seeking a bit of retail therapy, Aswan has the best souk in this part of the country and we spent happy hours wandering around, scooping up raffia baskets, cotton trousers and some crimson fake fur slides. Bartering is easy and everything can be got for less than half the first quoted price. You only have to mention the name of Liverpool’s Egyptian striker Mo Salah for a huge grin to appear on a stallholder’s face.

The most spectacular temples are at Luxor and we were driven three hours across country (tourists are not allowed to drive themselves for unspecified ‘safety concerns’).

We stayed at the Al Moudira hotel, an exotically styled oasis on the west bank outside the city. The rooms, decorated with antique furniture, are built around small courtyards with tropical gardens. At every turn is another beautiful seating area – chintz-cushioned wicker sofas, sumptuous daybeds, tinkling fountains. How lovely to exchange the ubiquitous hotel buffet breakfast for a table in the garden where small birds perch in the trees ready to nab your croissant.

Luxor is dense with world-famous sights so it’s worth focusing on just a few. Karnak, our first stop, was unmissable. With its size and majesty, it’s easy to understand how these incredible temples enabled the rulers to position themselves as earthly leaders with close connections to the gods that held the ultimate power. 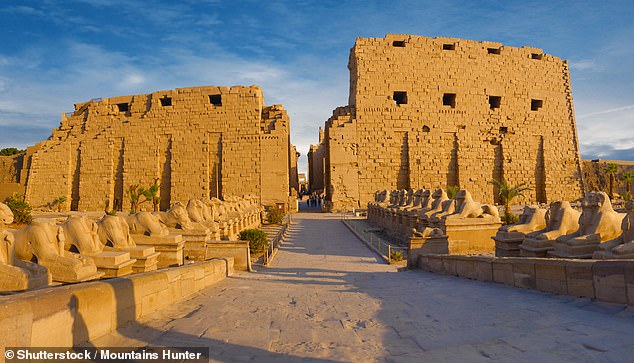 Karnak Temple, above, is ‘unmissable’, writes The Mail on Sunday’s Alexandra Shulman

A close second was the Temple of Luxor, which greets you with a long avenue of sphinxes, leading to colossal pillars and beautiful wall paintings that should be visited either first thing in the morning or else in the cool of evening.

Less famous is the Luxor museum, housing an intelligently documented collection, including the mummified remains of Ahmose I and Rameses.

The public ferry across the river was filled with men in fez and women in traditional dress commuting to and from work – a lovely glimpse of everyday life – and took us to the west bank, home of the Valleys of the Kings and Queens, where the royal tombs are built deep in desert rock.

Again, editing the choice down is crucial as it is impossible to visit everything. It’s worth paying extra to see exceptional ones that aren’t included in the standard ticket price, such as Nefertiti.

I’d always wanted to visit Egypt and was worried that when I did finally manage to get there, it would not live up to expectations. It’s a country of so many different stories with enough mindblowing sites to explore that even I didn’t mind leaving my sun lounger.

Lufthansa cancels 1,300 flights as cabin crew strike this week – is your holiday affected?

RANKED: The 30 countries where expats are happiest