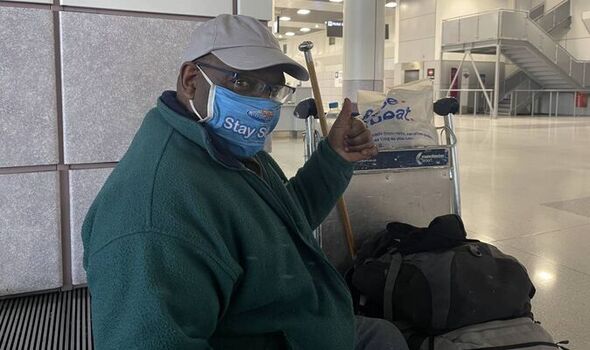 Tim Samunyai, 56,  from Coventry was so worried about the queueing ‘madness that he got to Manchester Airport at around 5:40 in the morning – well ahead of his 6:55pm flight to Zimbabwe on Sunday.

And despite his lengthy wait he says he used the time to ‘de-stress’ and prepare himself for a journey he described as a ‘spiritual timeout’.

Mr Samunyai said: “I was thinking if I come nice and early then I won’t have to deal with all that madness over there.

“I don’t know if I was panicking because of the news just highlighting the negativity or whatever.”

But he said the news was spot-on. “You saw queues for check-ins at TUI, EasyJet or Jet2 and it was choc-a-block.

“My problem was not realising that it’s a panic if you’re going to Corfu, Greece or Tenerife because everybody wants to go there, and it’s half-term. But if you’re going Africa, then there’s no issue.”

Passengers have been arriving at Manchester Airport early all week amidst reports of long queues for security and crowded check-in halls.

Managing Director Karen Smart resigned earlier this month after the city’s Mayor Andy Burnham said police could be drafted in to sort out the chaos.

Low staffing levels brought on by recruitment problems and covid sickness have been partly to blame, and Heathrow and Birmingham Airports have also been affected.

Airlines and travel firms have been encouraging passengers to give themselves plenty of time ahead of their flight.

But Mr Samunyai said that he made staff laugh when he revealed exactly how long he had to wait.

And they told him he ‘broke the record’ for the person who had arrived earliest for their flight.

For the long wait bought himself four books to read as well as a tablet to keep him entertained and had some sandwiches and pastries to keep himself fed.

Mr Samunyai said he had brough motivational books and a tablet keep him occupied – and some sausage rolls and steak bakes to fend off any hunger pangs.

In a statement last week, Manchester Airport Group’s Chief executive Charlie Cornish said: “We understand that people will feel anxious about missing their flights when they see queues of this length.

“So for now, we are advising passengers to arrive at the airport three hours before their flight leaves, to allow enough time to check-in, get through security and reach the departure gate.

If passengers follow that advice, and allow more time than normal, we are confident they will get away on their travels.”

Yes, you can pull off a laid-back Miami vacation — here’s how to do it

Travelers with Masks: This airline’s amazing new video reminds us all to mask up

Skiing holidays: How to book your next ski break as TUI warns situation ‘not encouraging’