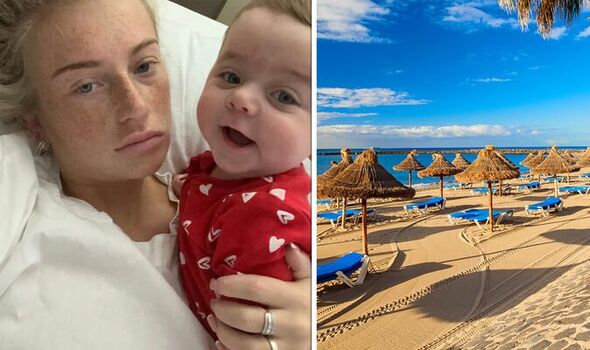 During their recent holidays in Spain with their six-month-old daughter, Angel Kirkland and Ryan Smith fell ill and had to spend a week in the hospital.

The young family went to Tenerife last month to spent five nights there.

Angel, Ryan and their daughter were having a lovely time until they fell ill on their way home.

The family was about to take a coach to go back to the airport when they both were sick outside the bus park.

Angel collapsed and could barely walk and Ryan experienced the same symptoms.

The couple were taken to a hospital, where a week-long showdown between the hospital and their insurance company occurred, according to the Edinburgh Live.

Angel claimed: “While in the medical room we were put on anti-sickness drips and Sierra was taken away by two lovely Jet2 staff. She was beside herself and I could hear her screaming. We felt helpless lying there, it was such a shame she must have wondered what on earth was going on.

“It would usually be her bedtime as it was past 9pm, but we were taken in an ambulance to the Hospiten Sur in Tenerife where they told us we both had Gastroenteritis and would have to pay 200 euros just to be seen.”

Ryan managed to get them seen claiming they had insurance and didn’t have to pay for it.

What do you think? Join the debate in the comments section below

It was, however, a private hospital and the nearest public hospital was two hours away.

A nurse reportedly got in touch with the insurance company and was told they didn’t have to pay anything.

Angel said: “On Saturday morning, we were taken to a proper bed and were supposed to get bloods taken, but nobody came. On Sunday, we were told that the systems were down and that’s why our bloods didn’t get taken. We were put on a liquid diet for the first day and then when we could eventually eat solids, they brought us meat and fish even though I said I couldn’t eat either.

“Meanwhile, our baby girl had the same clothes on for three days now. Thankfully, a lovely interpreter managed to get her clean clothes but she had nappies which were too big. Every time we asked for milk, the staff rolled their eyes at us.”

Angel explained they were discharged but they had to wait for the Post Office to send the hospital a guarantee of payment.

After many phone calls to the Post Office, Angel was told that they didn’t have to pay as they should not have been kept in the hospital for that long and it wasn’t their fault.

Angel said: “We were not even allowed to leave the room or go for a walk with our baby. On Monday night we were told that no matter if the insurance agree to pay or not, we would be allowed to leave.

“This morning, they [the nurses] came in again and said you pay or you leave and slammed the door. By that point we’d had enough and just walked out the hospital. We had to organise flights to Bristol as every flight to Edinburgh had 13+ layovers.

“We are getting a flight home to Edinburgh today, the staff at the hospital and the Post Office have been an absolute disgrace the way they have treated us, especially with a small child. We felt like prisoners with a baby.”

The couple has now been left with a medical bill of over 4,000 euros.

A Post Office spokesperson said: “We’re sorry to hear of the experience Ms Kirkland and her young family have had at the end of their holiday in Tenerife. We are urgently investigating what happened at the hospital and we will be in contact with Ms Kirkland regarding her claim.”

New Zealand: a journey into flavours – A Luxury Travel Blog

On board the world's longest flight