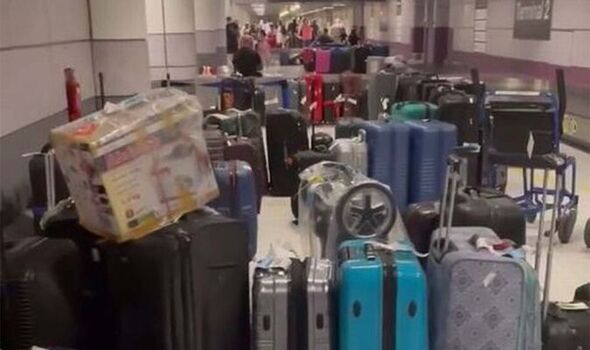 Passengers flying back to Manchester on Saturday (May 28) shared videos online of ‘hundreds’ of suitcases left ‘abandoned’ in the baggage halls. The passengers said that they waited hours for their own luggage to arrive, only to be told they would be unable to collect it.

Dawn Brian, from Stoke-on-trent, landed in Manchester at around 9.50pm on Saturday night from Palma de Menorca. “We were already worrying about what we were going to encounter when we landed but it was just utter chaos,” Dawn told the M.E.N. “We were waiting for our luggage for two hours and the belt on the carousel hadn’t even moved at all. It was horrendous. There were bags everywhere that had just been left abandoned from other flights. You could see they had come from places like Goa.”

Dawn said after a two hour wait, passengers were informed they would have to fill out a form to have their luggage delivered to them. “They couldn’t tell us when we would get our luggage back but there were people there who were saying they had medication in their baggage,” she explained. “Someone said their house keys were in there and they couldn’t get into their house without them.

“We’ve got all sorts of stuff in our case that we can’t get to this morning, there’s nothing for us that’s desperate but for a lot of families there will be. When we spoke to a staff member, my husband asked why it was so chaotic and they said that there wasn’t enough staff to cope with the amount of queues.

“People were getting a bit fraught and frustrated, there were children crying and it was just absolute pandemonium. Unfortunately, we already have another holiday booked in Cyprus in September from Manchester but we will definitely choose to fly from somewhere else next time.”

Vicki Bowdler, from Westhoughton in Bolton, arrived at Manchester Airport at 10pm on Saturday after being on holiday in Menorca with her eight-year-old daughter. “Our flight was luckily only delayed by an hour but we then had to wait onboard at Manchester because there was no air bridge available for us,” she said.

“When we got off, we could see passengers from another TUI flight were already being told to report their baggage as delayed and to go home. We were told we would have a 30 minute wait for our luggage but every time everyone asked, it was always 30 minutes.

“Kids were getting hysterical, my daughter was panicking so a lovely couple came to help out and try to take her mind off what was happening as it was clear the bags were not going to arrive. We waited three hours until we were told at around 2am that we would have to fill out a form and go home.

“There was no communication whatsoever, we were just left waiting with this 30 minute promise that never came. It’s a disaster waiting to happen down there with luggage just piling up, no staff to be seen and a whole load of rightly upset and angry passengers.

“There were babies with no prams, some with no change of clothes. No one should have to go through that on a way home, but certainly not kids who are tired after their time away and can’t put into reason why all their belongings haven’t come back with them. I feel for those now travelling over half term as I feel it is just going to be total bedlam.

“We have already booked with TUI for next year but I am tempted to cancel. I’ve pretty much always flown with TUI, bar the odd holiday, but this experience has just made me think I should cancel while I’ve got the chance and book with another operator. I am also considering flying out from another airline as it was just ridiculous.”

Duncan Smith was on board the same flight as Vicki and said he was informed there were no staff available to offload their bags until the morning shift started. “We were told there were no staff to recover our bags but a TUI flight from Gran Canaria landed at 01:56am and the bags were processed without delay onto the carousel we were waiting at,” he said.

“Turns out they did have staff in but chose to leave our baggage stranded whilst other flights arriving several hours later were processed. Our bags finally arrived just after 6:30am on Sunday – some eight and a half hours after landing. Communication and support from TUI and Manchester Airport was appalling – the baggage hall is a complete shambles, awful scenes.”

A spokesperson for Swissport said: “Half-term is always a busy time for airports and we know that they, as well as our airline partners, are currently experiencing a number of challenges which often have a knock-on effect on our work, exacerbating existing capacity challenges. We understand how frustrating delays are for passengers so our staff will always try as hard as they can to find a solution. We will continue to collaborate with airports, airlines and other baggage handlers to minimise disruption wherever we can.”

A TUI spokesperson added: “We would like to thank customers at Manchester airport today for their patience and understanding at this exceptionally busy time. We are continuously working with airport staff and baggage handlers to ensure a smooth running of operations on the ground. The safety and wellbeing of our passengers and staff is always our highest priority.”