Many details of how the Inca site was constructed are still a mystery. Built in the Andes at 2,430 metres above sea level around AD1450, Machu Picchu was created without wheels or animals to transport the huge stones up the mountainside. A series of 360-degree images on YouVisit’s virtual tour explore various areas of the site. The tour also includes a voiceover guide with information on the architecture, history and resident alpacas. For a bird’s-eye view, head to Air Pano for stunning interactive images, including from the summit of Machu Picchu mountain.
• Guardian Travel’s Will Coldwell accompanied the Google Trekker team when they mapped Machu Picchu in 2015 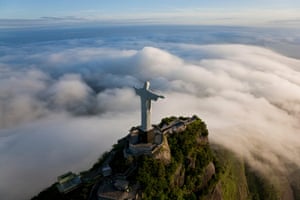 Standing 30 metres tall on the summit of the 710-metre Corcovado mountain and visible from all over Rio, Christ the Redeemer is the world’s largest art deco statue. As with some other entries on this list, this tour on Google Arts and Culture uses the Street View technology to allow visitors to “walk around” the site. As the sun sets behind misty clouds, the view from the end of the platform walkway looks out across the city, including Ipanema and Copacabana beaches and Sugarloaf Mountain, which is dwarfed from this great height. Or check it out at different times of day, with these 360-degree shots from above.

On the edge of the desert where the sand ends and modern Cairo begins, the pyramids of Giza were constructed around 4,500 years ago as grand tombs for the pharaohs. With walking routes around the site, this virtual tour shows the magnificent structures from near and far. This includes two of the largest pyramids ever built – the Great Pyramid (147 metres) and the Pyramid of Khafre (136 metres) – plus the Great Sphinx to the east. 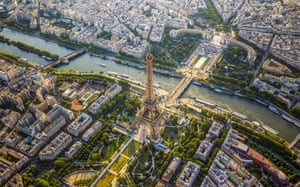 See one of the world’s most visited monuments on this interactive tour, which takes travellers up to the viewing platform of the 324-metre tower – give or take 18cm, which is how much the iron contracts and expands by – depending on the ambient temperature. Additional immersive digital exhibitions explore its construction, from 1887-89, with photos of the first glamorous Parisian visitors. There are also 360-degree shots showing a helicopter’s view of the tower against the city skyline. 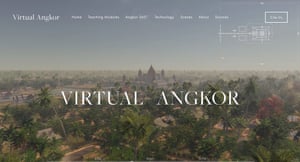 Angkor Wat, “the city of temples”, is the largest religious monument in the world, originally built as a Hindu temple complex dedicated to the god Vishnu in the first half of the 12th century, but gradually transformed into the centre of worship for Buddhism in the latter part of the same century. This virtual tour explores several of the magical temples, including the five towers of Angkor Wat itself; the pink sandstone Banteay Srei; and Ta Prohm (as seen in the 2001 film Lara Croft: Tomb Raider), where nature has reclaimed the ruins. For a glimpse of the living city as it would have been in the 13th century, the Virtual Angkor project includes 360-degree video simulations created collaboratively by archaeologists, historians and CGI artists. 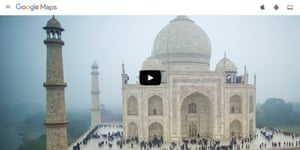 Built as the resting place for his beloved wife, Mumtaz Mahal, by the Mughal emperor Shah Jahan, this symbol of eternal love is considered one of the most beautiful buildings ever created. The 17th-century white marble “crown of palaces” in Agra, north India, combines Persian, Islamic and Indian architectural styles and took 22 years to complete. The interactive digital pathways include routes around the mausoleum itself, reflecting pool, paradise gardens and ornate red sandstone mosque. Aerial 360-degree images soar above the lotus-topped dome and minarets for a view over the Yamuna River. 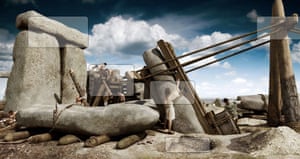 The prehistoric site of Stonehenge in Wiltshire dates back 5,000 years. It was originally a simple earth enclosure used for cremations, with the ring of standing stones added around 2500BC. The stones include large sarsen blocks that archaeologists believe were brought to the site from Marlborough Downs (20 miles away) and smaller bluestones from Preseli Hills in Wales, a confounding 140 miles away. The English Heritage virtual tour includes a 360-degree interactive image from the centre of the site, with pop-out videos on its excavation, conservation and design, including as a site for celestial observation. Other interactive CGI images give more information on its construction and the landscape at different periods in its history.

One of the oldest cities in the world, Petra was occupied thousands of years BC, though it is believed the spectacular sandstone city was built in the 3rd century BC by the Nabatean Arabs. It’s rose-coloured buildings have been viewed by the world in films such as The Mummy Returns and Indiana Jones and the Last Crusade, though around 85% of the city remains underground, yet to be excavated. This online tour includes a guide narrating the interactive walk around some of Petra’s most iconic monuments. It heads through a narrow gorge called the Siq, passing tombs, temple ruins, an enormous monastery and Al Khaznah, the famous building whose elaborate facade is carved into the gorge wall.

Once seating between 50,000 and 80,000 spectators who came through 80 entrances, the Colosseum was the world’s largest amphitheatre when it was built between AD70 and AD80 for sporting events and gladiatorial combat. Around two-thirds of the structure has been destroyed in the 2,000 years since but the remaining ruins are one of Italy’s most popular attractions. Take a walk inside, around the various levels, or fly overhead in these 360-degree images. 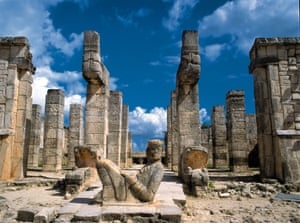 There are many strange and wonderful architectural features within the ancient city of Chichén Itzá on Mexico’s Yucatán peninsula. El Castillo pyramid (also known as the Temple of Kukulcan, a serpent deity) at the centre has a combined 365 steps ascending its four sides. Twice a year, on the equinox, the steps cast a shadow in the shape of a serpent on the north section, which connects to a snake head sculpture at its base, meant to depict Kukulkan. The 360- aerial images explore several of the Mayan ruins, including the pyramid, the Temple of Warriors, the observatory and the nunnery.

How to Have the Perfect Road Trip, According to an Expert