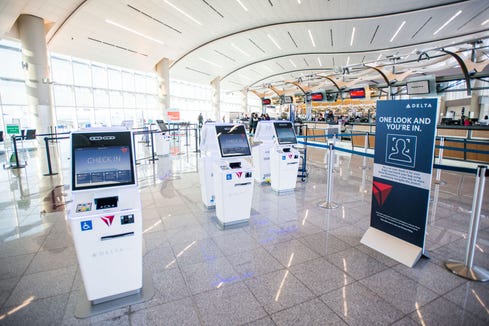 Delta says the Atlanta airport’s Terminal F has become the “first biometric terminal” in the United States where passengers can use facial recognition technology “from curb to gate.”

And Delta has already announced plans to offer the technology at another of its hubs: Detroit.

In Atlanta, Delta has been rolling out biometric features gradually since October. Now, starting on Dec. 1, all Delta passengers traveling on flights to international destinations will be able to take advantage of the biometric options for all parts of their journey when departing from the airport’s Terminal F.

TODAY IN THE SKY: Trip report: Reviewing the Delta One Suite with sliding privacy doors

“We’re removing the need for a customer checking a bag to present their passport up to four times per departure – which means we’re giving customers the option of moving through the airport with one less thing to worry about, while empowering our employees with more time for meaningful interactions with customers,” Gil West, Delta’s COO, said in a statement touting the airline’s effort to outfit Terminal F with the biometric technology.

The option also will be available to international passengers flying nonstop from Atlanta on Delta’s partner airlines Aeromexico, Air France-KLM or Virgin Atlantic.

PHOTOS: Behind the scenes at Delta Air Lines (story continues below)

Will people ever touch these iconic tourist attractions again?

Why Cyprus makes for a perfect autumn holiday in the sun

Former Nazi bunker in Hamburg is to open as a hotel