Home » Relax Travel » 36 hours in Marbella: Why the party town of Spain is perfect for a flying summer visit 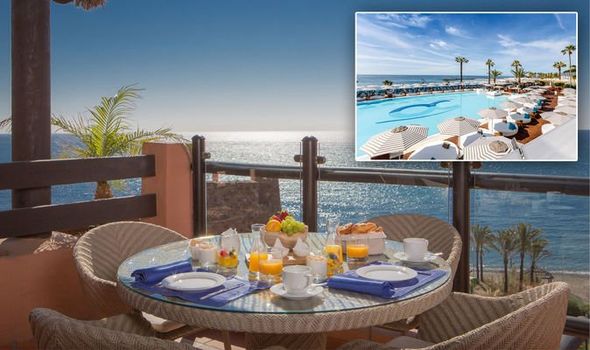 I was one of those myself recently – but instead of lounging around for a week of debauched partying, I packed it all in to just 36 hours. While Barcelona, Madrid, Seville and Valencia are well known Spanish weekend break destinations, Marbella is not necessarily thought of that way. However, a short break is a fantastic way to get a taste of the area and rather like Spain’s much-loved tapas, try a little bit of everything. Just over two hours flight away from London, the incredible landscape and searing heat felt like another world.

36 hours in Marbella: Why the party town of Spain is perfect for a flying summer visit

After an early flight, we sped through security and hopped in to a car to take us to the luxury beachfront Kempinski Hotel Bahia.

Visitors to Marbella have traditionally stayed in villas, our driver told us, but now finally there is a true 5* luxury offering in the area for those who prefer the convenience of a hotel.

And what a luxury! Exotic parrots greeted us as we arrived (one of the cheeky birds even wolf whistled at us, which was an amusing trick), and we were given some refreshing tea while check in was processed.

Arriving so early meant our room wasn’t ready but nothing phased the friendly staff, who whisked us down to the spa so that we could change and leave our luggage.

Next came lunch at Spiler Beach Club, something of a hotspot in the area. Singers crooned soft jazz as we enjoyed a lunch of seafood, salads and cocktails looking over the beach – home felt pleasingly far away. 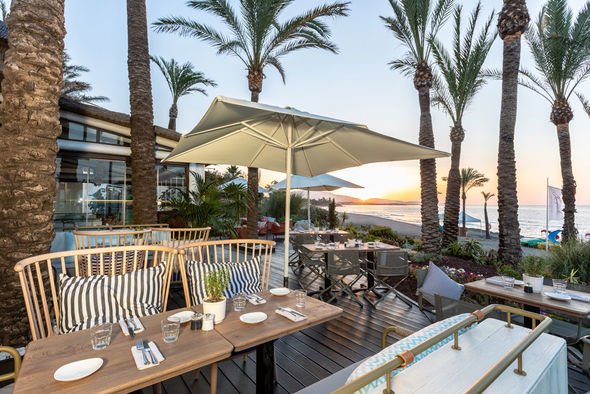 Fully stuffed, we spent the rest of the afternoon on a sun lounger attempting to get as much of a tan as possible (the one drawback of such a flying visit was the lack of tan time, although now maybe I won’t resemble a leather handbag *quite* as much when I’m older).

We tore ourselves away to check in to our room at around 5pm, and enjoyed the early evening warmth on our terrace, drink in hand. The room was large, with a whirlpool bath and standalone shower in the bathroom. Having been up since 3.30am, someone might have had a quick nap, and then it was time to put on our best and hit the town.

Newly opened roof terrace Air, on top of also new restaurant Breathe, is the place to see-and-be-seen this summer. The incredible views of La Concha Mountain and gorgeous decor in the bar had everyone pulling out their phones for pictures. We did our best to sample as many of the cocktails as possible – for a showstopper that will have your friends looking on in envy, ask for the one that comes in a pineapple (yes it is as thrillingly ludicrous as it sounds).

Don’t skip the food, which is all cuts of raw meat and fish, with award-winning oysters on offer too, perfect for keeping the wolf from the door before dinner.

Despite the terrace being open until 6am, we hit a wall at 10.30pm, and slipped out just as the party was really getting going, finding ourselves back in our hotel room and asleep by midnight. 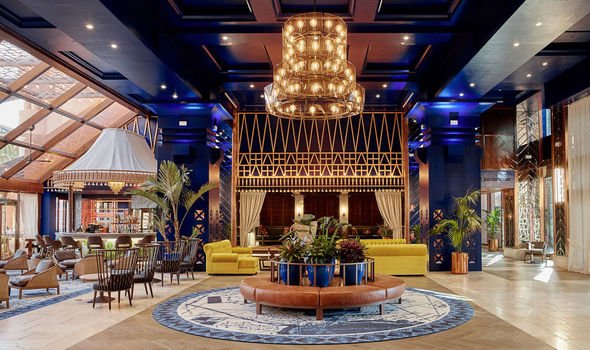 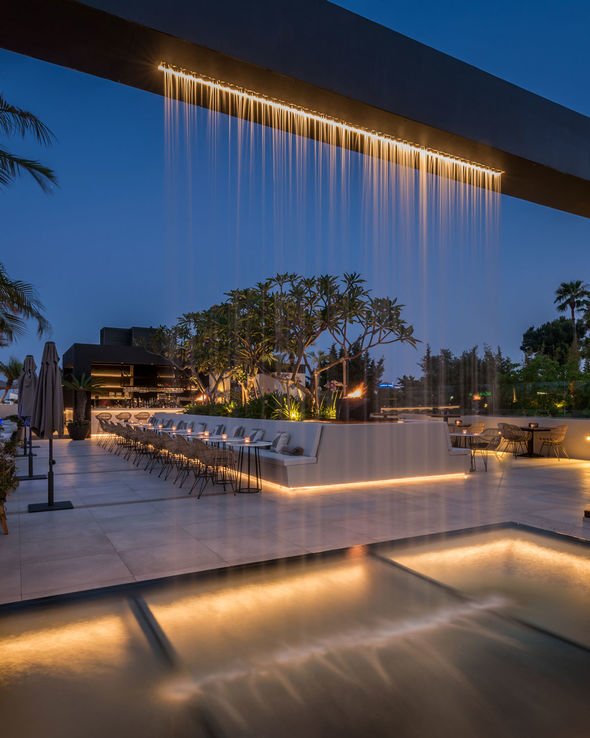 At the time, we felt a bit guilty – should we have powered through and made the most of it? – but waking up hangover free to fully enjoy our plans on Sunday was worth it.

Because, you see, we were hitting the ultimate in overblown Marbella fare – the world-famous Ocean Beach Club. They say there is nothing quite like it, and they would be right.

Crisp white beds fan out around a massive pool, with the best DJs in the world playing varying types of house music throughout the day and well in to the night.

As there were only two of us, we opted for a small bed, but looked on as large groups took over the biggest beds right by the pool, laughing, dancing, and generally determined to party hard.

Champagne flowed, selfies snapped, and a parade of dancers in shimmering blue outfits took to the bridge across the water to dance and get the party spirit going. 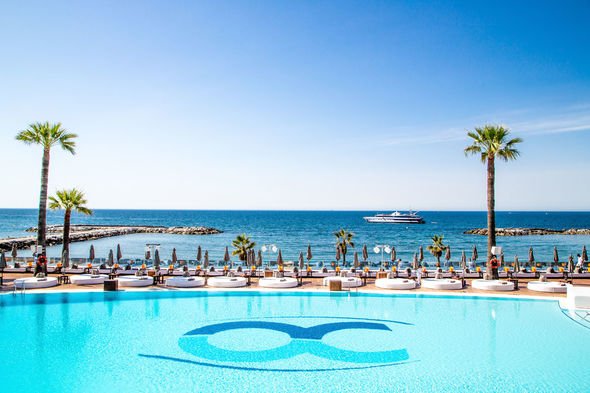 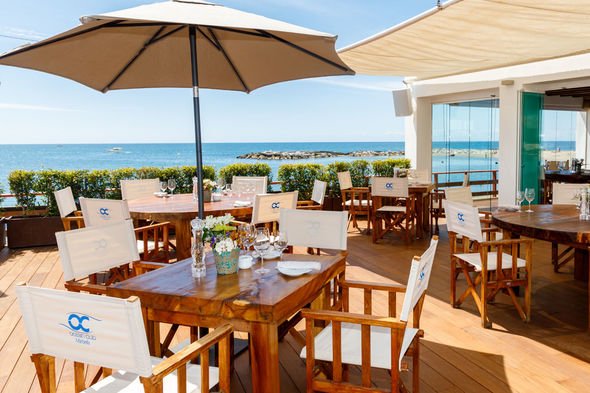 After a morning sipping Veuve Clicquot, we took a break from the non-stop party to have a relaxed lunch at Amaï by OC. Despite being minutes from our bed, it felt like a calm oasis, and refreshed us, leaving us ready to hit it hard for the rest of the afternoon.

The food was delicious, and worth a visit even if the rest of Ocean Club isn’t your thing. We enjoyed sushi and salads, but there was so much choice, with pizzas, pasta, seafood and sandwiches on offer too. Don’t skip dessert – my vanity about being in a swimming costume made me take some time over the decision – but I took the plunge, telling myself I’d only eat half of the banana fritters I ordered.

As soon as the plate arrived, I knew I wouldn’t be able to resist the whole thing – perfectly battered bananas sat on a bed of caramel sauce with a scoop of ice cream on the side. Decadent gold sprayed toffee added the final touch, and seemed a fitting end to our time in the land of the perma-tan.

And after a couple more hours on our daybed marvelling at the tiny bikinis that pass for swimwear now (yes, I’m mostly jealous I’m not 21 and fearless anymore), it was the time to leave, so we reluctantly tore ourselves away from the party and rode the 40 minutes to the airport.

Landing in London a few hours later, Marbella felt like a hazy, champagne induced dream – and one I would urge everyone to enjoy this summer.

Ocean Club, Marbella (www.oceanclub.es) offers a starting rate of €135 for a small round day bed for maximum 3 people and goes up to €975 for a Super VIP Square bed for maximum 12 people (which includes 3 bottles of Dom Perignon champagne and carries an additional minimum spend of €1,500)

Kempinski Hotel Bahia (www.kempinski.com/marbella) offers a nightly rate in a Grand Mediterranean Room from €240 (low season), €770 (high season) based on two sharing a double room on a B&B basis