I went to south-west Tasmania and totally freaked out. Oh my goodness – simply one of the most beautiful, haunting, weirdy landscapes I have ever had the good fortune to go and look at. The Port Davey marine reserve is huge, three times the size of Sydney Harbour and that is just the wet bits.

The landscape is dominated by numerous ridiculous golden grey green mountain ranges barging about, each covered with white quartzite rocks and cliffs and boulders thrusting out of them, from their tops right down to the harbours and bays and channels. Beautiful white quartzite sandy beaches and button grass plains covered in button grass. There is goddamn button grass everywhere you look, nothing wrong with that, though, there are worse plants – like the cactus I found in a plastic bag on the street a few years ago. I took it home and stuck it in a pot and it lived! I call it the Evil Space Cactus because it is the most ferocious prickly bastard you can’t go anywhere near it. It is getting huge. 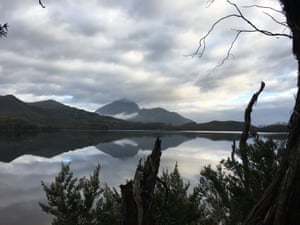 Anyway, in this bit of Tasmania there is a permanent thick layer of peat under everything, and as the freshwater runs through it on its way to the sea, it turns brown from all the tannins. Like some sort of gigantic open-air cup-of-tea factory.

Then, and this is the weirdest part, because all the waterways are tidal saltwater, when the tea-coloured freshwater runs into the various bays it sits in a layer on top of the denser salty water below. The tannin layer can be between one and four metres deep. It doesn’t mix in until it gets to the actual Southern Ocean. It is called stratification (science).

Why do we care? Because it is interesting! The cup-of-tea water is low in oxygen, light and nutrients so you don’t get much algae or plankton which is a huge bummer to most fish and that is why they don’t live there. But there ARE some proper deep-sea creatures that do live underneath the tannin layer in the saltwater because it is dark like deep in the ocean but just near the surface or something. AMAZING! 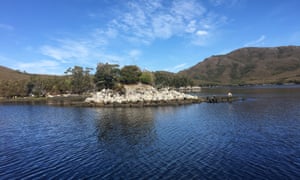 You can see the high-tide line without any trouble because the tannin stains the quartzite.

A team of researchers from the First Dog on the Moon Institute first came to the Melaleuca lagoon at the western end of Port Davey reserve in January this year as guests of the Difficult Bird Research Group. The DBRG are a ragtag crew of ne’er-do-wells and bird scientists who we first met during their (still ongoing) campaign to save the extremely unhelpful swift parrot – the institute donated some adorable cartoon prints and they raised millions of dollars (give or take a few millions of dollars).

Now the DBRG have turned their attention to the even more ridiculous and endangered orange-bellied parrot – both of these birds are the only migratory parrots in the world and extremely difficult to keep alive. But at least the DBRG are having a red hot crack at it. Lovely people. 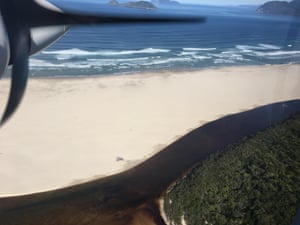 To get to Port Davey you either have to come in on a boat (we do not have a boat), or walk from Tasmania’s southernmost town Picklebum Cove* – a death-defying journey of six days away from the nearest shop, stomping (sustainably) through vicious empty wilderness. Or fly like we did in a tiny tiny tiny plane piloted by someone who I am pretty sure was 12 years old.

The airline Par Avion (who flew us in FOR FREE IT WAS A MONSTROUS JUNKET AHAHAHAHA) are the only people who fly their planes into the Melaleuca airstrip – they fly all the bird scientists for free as well so they are very nice and that is why I am saying nice things about them not because we got a FREE HOLIDAY. Prove that I lie.

It is apparently company policy to hire EXTREMELY YOUTHFUL PLANE DRIVERS so it is not terrifying at all hurtling through the air at 15,000 feet in what feels like a Toyota HiAce with wings and a propeller with a tween in the pilot seat. The pilot who flew us out the last time had an enormous and magnificent red bushranger beard but I wasn’t fooled, I assumed it was fake, and that he would rip it from his face just before we took off and say: “Ahahaha I’m not really a pilot, I am 11. Your real pilot is over there hiding behind that tea tree shrub.” That being said, all the pilots have been extremely professional, very good at planes and also quite charming, it was not their fault I thought I was going to die. 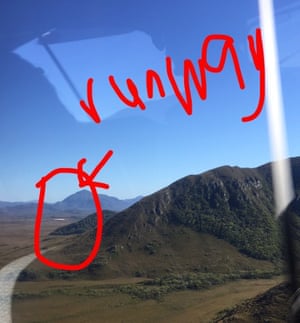 Because the weather was so mild** when our pilot flew us in this time, we were able to stay extremely terrifyingly low zooming REALLY CLOSE to mountain tops and various bits of ruinous beautiful coastline. Spectacular. I reckon it was the best flight I have ever taken in a plane. It was even better than the time I flew a jet with my own bare hands and I’m not even joking – ask my friend Steve the Jet Guy – I really did.

Par Avion runs an extremely sustainable camp up the estuary – we spent two nights there and three days pootling about rivers and bays in a zippy boat sort of thing with the charming and knowledgeable Greg and my friend Mark who is a bird scientist (and also camping guide). I had never met Mark in person before, just on bird twitter, where he is @neophema1. Knows loads of bird stuff. Great bloke. Has a predatory mite named after him (Nidilaelaps holdsworthi) also known as Holdsworth’s nest-dog mite. It was discovered in orange-bellied parrot nests and is probably a beneficial predator of parasitic bird mites. But who isn’t these days?

The whole thing is all unspeakably beautiful – I almost got bored with how incessantly gorgeous and amazing it was. 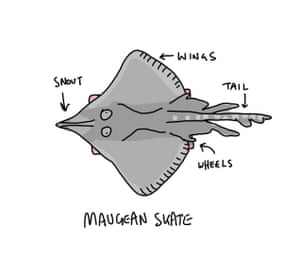 The Maugean skate – a fish (Zearaja maugeana) which ONLY LIVES IN BATHURST HARBOUR! NOWHERE ELSE ON EARTH! Apparently known as the thylacine of the sea according to Google. (We did not see one of these.) 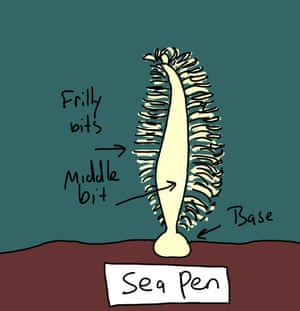 They have things called sea pens (Sarcoptilus grandis)– they look like a giant mutant quill pen – unlikely frondy whatsits that filter their lunch out of the water, I said no this is a pretend thing you made up but they showed me a picture in a book. (We did not see any of these either – except in the book) 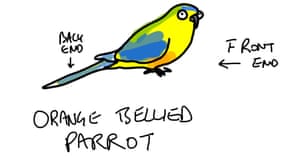 The orange-bellied parrot (Neophema chrysogaster) officially designated a “moron” by one of Australia’s premier bird experts – we saw quite a few orange-bellied parrots – in one tree there were four at one time and Mark said that is 10% of the world’s wild population. Sad. 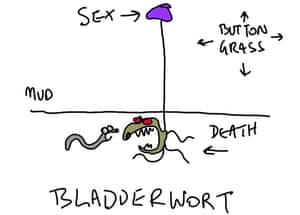 Bladderworts (Utricularia monanthos) – these are lovely purple flowers (sometimes known as fairy aprons) that grow out of the mud (there is a lot of mud) they are insectivores and their roots eat tiny worms (nemotodes).

Sundews – also growing in the mud and also insectivores – they eat bugs or something I don’t know do I have to do everything? Go and google it I’ll wait here.

The bastard trumpeter – a fish we also did not see but did laugh its stupid name. (Latridopsis forsteri). 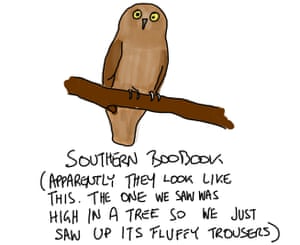 Boobook (Ninox leucopsis) – an owl (we saw one – it makes a noise like … wait for it … Boobook! Hilariously there is also an owl called a Morepork which we heard but did not see – it makes a noise like … wait for it … Morepork! Aaahahahahaha owls). The “bird scientists” say the Boobook and the Morepork are the same thing, and that the Boobook isn’t even a Boobook it’s a New Zealand Morepork (Ninox novaeseelandiae) which is ridiculous because one says Boobook and the other says Morepork.

Huon pine (is actually a tree) – saw lots including one that was around 1,500 years old!! (Lagarostrobos franklinii). 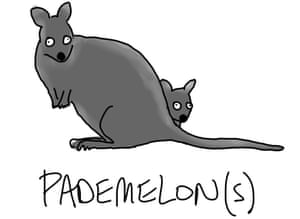 Pademelon (Thylogale billardierii) not a fruit but a marsupial – saw one of these AND IT HAD A BABY ONE OMG!

There is a lot of white people history to look at and talk about: the late naturalist and tin miner Deny King (famous for loads of interesting stuff) and his friends and relations, also tin mining, whaling, huon pine chopper-downers, and tons of boat action over the years. Aboriginal history is less prominent although there are a few things, Aboriginal people had been here for 35,000 years apparently. We saw an ochre cave that the locals had dug something like 6,000 years ago, it had an excellent midden of mud oysters.

It was strange a feeling moving through a landscape that looked the same today as it did 6,000 years ago. The button grass moorlands that extend far beyond the marine reserve were burnt for many thousands of years by Aboriginal people. Without the burning, the moorlands will eventually turn to forest and then rainforest. Today Aboriginal people in Tasmania take an active role in managing the landscape and maintaining some of the cultural traditions of their ancestors.

It is interesting and unexpected that the whole place hasn’t been trashed. A third of Tasmania is world heritage-listed and half the state is some kind of reserve or national park***. It is a happy confluence of things that has kept this part of the south-west free of resorts and dickheads – no fish, no road, the soil is all mean and unhelpful former quartzite, it is allegedly freezing most of the time**, nothing of value to dig up or chop down (except for the occasional huon pine).

Perfect really. It is just crap enough to keep people away. As Greg our host said, “If there was anything good here, there’d be apple trees and cows and a four-lane highway leading to a small city.” But there isn’t. It is a remarkable piece of the world, and you should see it if you can. I did.

** During most of my visits to Tasmania the weather has been lovely or at least not terrible. Tasmanians keep going on about how cold and wet it is all the time but I am not so sure. Perhaps they are trying to keep people away

*** A lot of the facts in this article come from things I read on the internet or that people said to me and they may or may not be true. Even though I pretend to be a journalist I am actually a cartoonist and that means I am allowed to make things up and be wrong