Home » Family holidays » Away with words: an Arvon fiction-writing retreat in Devon

Despite the glowering weather, the 1½-mile walk from my creative writing retreat at the 16th-century manor house of Totleigh Barton is invigorating. The remote west Devon landscape is heavy with winter; it’s stark and elemental but also evocative and, most importantly, thought-provoking. Being in the wilds gives me the time and space to work out what needs to change in my short story, and how.

Just below Sheepwash, the River Torridge is in flood. Swollen by days of rain, it has burst its banks, blocking a road into the village I’d intended to visit. On a humpback bridge, my walk is halted: water surges around the bridge’s northern flank, as well as beneath it. Nature has its victory but – on the penultimate afternoon of the Arvon fiction writing course – I’ve been gifted the metaphor to describe all that the week-long retreat has given me: a torrent of advice, insight, positivity, camaraderie, a notebook brimming with ideas – and the knowledge that my walking boots definitely leak.

The poets John Moat and John Fairfax founded Arvon in 1968 with the aim of giving young writers the chance to develop their skills. The first residential course was held at a Devon community centre but, in 1972, the manor house at Totleigh Barton became its proper home. Further centres at Ted Hughes’s former home, Lumb Bank in Hebden Bridge (1975), and The Hurst in Shropshire (1999), were added to what is now a charitable organisation known as the Arvon Foundation.

Arvon courses extend beyond poetry and fiction to include non-fiction and memoir, songwriting, screenwriting, playwriting and radio dramas – and cater for all levels of experience. Its list of alumni is impressive and I’m sure for many who attend there is also the draw of being taught by established writers and artists, as well as a visit from a guest speaker: ours is Jane Harris (Sugar Money; Gillespie and I). 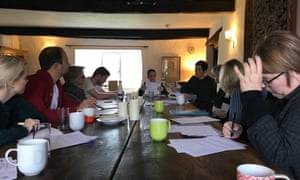 After the walk, I return, content, to my sparse, functional writer’s quarters in one of Totleigh Barton’s several outbuildings (some in my 10-strong group have rooms in the main house). The afternoon falls into a familiar, comforting and productive routine. I re-read a story I have been working on and make changes suggested during a tutorial, along with those prompted by the walk. As writers do, I gaze out of the window – into the garden and at the farmland beyond – and jot down ideas, as well as making notes on the novel extracts one of our tutors has provided for inspiration. Distractions are few. Here – more than 10 miles from Okehampton, the nearest modestly sized town – there is no wifi: emails do not arrive, the internet is a faraway land. There are no TVs and mobile phone signal only appears at around the second cattle grid … about five minutes’ walk from the manor. This afternoon, as with those before it, all I have to remember is that communal dinner is served at 7pm. 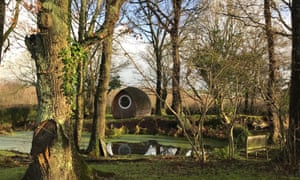 A creative writing course may not seem like a retreat in the conventional sense but I find the ditching of distractions and being part of a like-minded group is an uplifting mix of focus, contemplation and encouragement. It’s important to me that the week (which starts with ice-breaking introductions on Monday afternoon and ends with emotional goodbyes on Saturday morning) is not all about isolation.

At the first session, in the manor house’s barn, our tutors tells us about themselves: Rachel Seiffert (A Boy in Winter; the Man Booker-shortlisted The Dark Room) and Jonathan Buckley (The Great Concert of the Night and winner of the 2015 National Short Story Award for Briar Road). They encourage us to do the same and share how far along in our fiction-writing journey we are. Some have written a novel, others a work in progress. A few have not written before. I have some short stories, and ideas I don’t yet have a home for.

The centre’s amiable staff provide our breakfast and lunch but dinner is important at Arvon – as it’s prepared by writers for the rest of the group (yes, there’s a rota drawn up). Each evening, two or three of us make the meal, with the assistance of recipe cards and overseen by the house cook. (My Wednesday night vegan curry was memorable – mainly because everyone survived it.) 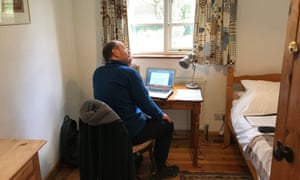 Our days are punctuated by communal meals, where we share and solve writing problems or chat about books and writers we love. Mornings involve workshops with our tutors: Rachel has us trying out writing tasks and provides narrative insight, while Jonathan’s chapter extracts focus our minds on the myriad styles and techniques for starting a novel. Each afternoon as I go back to my room, or get cosy by the manor house fire, my mind buzzes with possibilities for how to develop the stories I have – and, even better, I have the time to work on them.

There are epiphanies, too, which come courtesy of the one-to-ones each tutor provides. Jonathan’s advice allows me to see a structure for a novel based on one of my short stories. Rachel points out where a story needs focus and succinctly shows me the importance of not putting constraints on an idea. “Is this a novel, novella or short story?” I ask. I don’t have to know, she suggests. I just have to write and see where that leads me.

That thought stays with me, not just for the freedom it injects into that piece of writing, but because its positivity sums up what the course provides: a framework for creativity and the enthusiasm to carry it forward.

• The retreat was provided by Avron; five-night courses start from £745pp, including accommodation and meals. Shorter courses and retreats are also available. Details of 2019 courses at arvon.org

United to codeshare with Airlink; AA with IndiGo