Like plastic, concrete is a manmade wonder material that allowed for advances in engineering and in public health.

And, as with plastic, we are only now waking up to concrete’s dangers – up to 8% of global CO2, clogged landfills, urban flooding, overheated cities, toxic dust, freshwater consumption, destroyed beaches and lakes, “sand mafias” and arguably a direct impact on the current mass extinction as urban environments encroach on the natural world and entomb biodiversity.

Unlike plastic, however, it can be difficult for individuals to know where to begin if you want to help reduce the world’s reliance on concrete. After all, you can stop using plastic bottles, but you can’t stop walking on pavement.

Nevertheless there are some concrete (sorry) steps you can take to reduce the global impact of the grey stuff.

1. Push for a cement tax

Only if the whole industry is forced to pay far more for the emissions of its product will companies shift to cleaner practices, as John Vidal writes in our piece arguing for a cement tax:

A specific cement tax would fit well into the growing clamour for a simple revenue-neutral global carbon tax. These have been proposed and adopted on a limited basis for over 20 years, but the cement industry has strongly lobbied against them in Europe, the US, Canada and elsewhere.

Tell your local political representative that you will no longer stand for this and that you support a cement tax as part of a global carbon tax.

Use timber, straw, bamboo or hempcrete – or consider some of the cement-free alternatives (carrots, anyone?) that are now being developed.

If you do demolish concrete at home, make sure to recycle it in some way – here are some ideas for ways to do that.

Most cement is not, of course, poured in backyard digs or concrete jewellery sold on Etsy – so don’t feel too guilty about enjoying polished concrete floors or beautiful Brutalist architecture.

Instead, the vast majority of concrete goes into huge infrastructural projects, such as the Three Gorges Dam in China or the Thames Tideway in the UK. 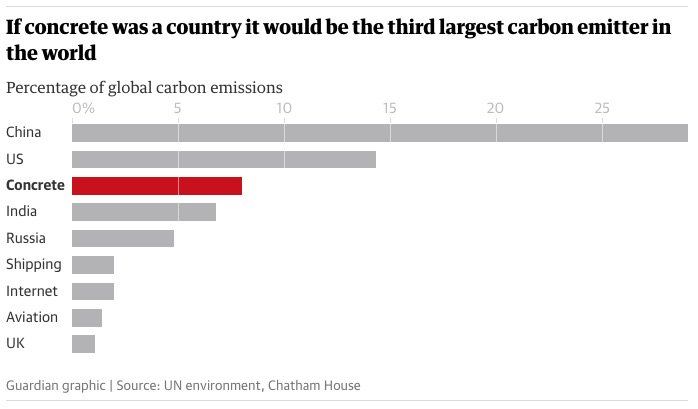 In the UK, the biggest consumer of concrete is likely to be the HS2 project rail project, which will pour an estimated 20m tonnes of the stuff – enough to pave over an area the size of Manchester.

The Hinckley B reactor, meanwhile, will use approximately 3m tonnes.

Adding your voice to public pressure to modify these projects to use less concrete and to only proceed if they are absolutely necessary – and not just efforts to artificially inflate GDP as is so often the case globally – will go much further towards reducing concrete use than anything you can do at home.

4. Divest your assets from cement firms

This week, a group of institutional investors coordinated by ShareAction, with over $1tn of assets under management, sent letters to company CEOs, including two large concrete firms, to ask them to set emissions targets in line with the Paris climate agreement.

Instead of just asking for disclosure of climate risks, these investors are asking for hard targets, and to sign up to a number of initiatives related to renewable electricity, energy productivity and electric vehicles.

“Cement has been on our radar for a while now,” says Beau O’Sullivan of ShareAction. “It was a priority sector agreed with the investor group because it is one of the most carbon-intensive industries.”

Two firms have responded to the request so far. Cemex said it is unable to commit, due to uncertainties about how it will capture the carbon dioxide it releases and what it says are unfavourable regulations, and said it will review its position in the next reporting cycle. Heidelberg said last June that it is in the final stages of approving the requests.

The other firms have not responded.

6. Consider paying a bit more for new homes and apartments that use less concrete

Construction is a conservative industry. Developers are loth to use recycled concrete, to test out alternatives or to use less concrete because concrete is cheap and well known.

They are also wary of spending more on alternatives to concrete, in part because they think consumers won’t pay the extra costs.

Prove to them otherwise, by requesting reduced concrete in new buildings or projects you are part of commissioning and advocate for a greater use of innovations and alternatives.

The most severe, but least understood, impact of concrete is that it destroys natural infrastructure without replacing the ecological functions that humanity depends on for fertilisation, pollination, flood control, oxygen production and water purification.

As Jonathan Watts writes, our concrete slabs “entomb vast tracts of fertile soil, constipate rivers, choke habitats and – acting as a rock-hard second skin – desensitise us from what is happening outside our urban fortresses”.

‘Delicate sense of terror’: what does concrete do to our mental health?

He makes a powerful case for how concrete transforms a culture (a civilisation intertwined with nature) into an economy (a production unit obsessed by GDP statistics, which politicians can inflate for personal gain … simply by pouring more concrete).

Arguably more important still is a change of mindset away from a developmental model that replaces living landscapes with built environments and nature-based cultures with data-driven economies. That requires tackling power structures that have been built on concrete, and recognising that fertility is a more reliable base for growth than solidity.

So get out, see some trees, change your mindset – and remember that underneath all that hard grey there’s a natural world we still depend on for our survival.

Yes, it’s possible to get a refund on a nonrefundable airline ticket; here’s how

Alaska Airlines takes on Southwest with boost to Hawaii routes

10 of the most beautiful places we visited in 2018