“Plant Riverside District is my career legacy and gift to my hometown of Savannah,” said Richard Kessler, Chairman and CEO of The Kessler Collection. “The project brings new life to Savannah’s riverfront with world-class entertainment, curated galleries, over a dozen dining options and jaw-dropping natural science exhibits for all ages. It’s truly a unique visitor experience and the first of its kind in the southeast.”

The redevelopment includes more than a dozen restaurants and lounges. Some of them are Baobab Lounge, an ode to African culture; Electric Moon, a rooftop bar with slides from deck to terrace; and Graffito, a pizzeria.

The new riverwalk includes restaurants with outdoor dining such as District Smokehouse, District Seafood and Riverfront Biergarten. The riverwalk focuses on ‘streetmosphere,’ a blend of local Savannah culture and music which creates ample opportunity for entertainment by street performers.

Visitors to Savannah’s new entertainment district also have a variety of cultural experiences to partake in, including an art gallery, a park honoring Martin Luther King, Jr. and natural science exhibits. 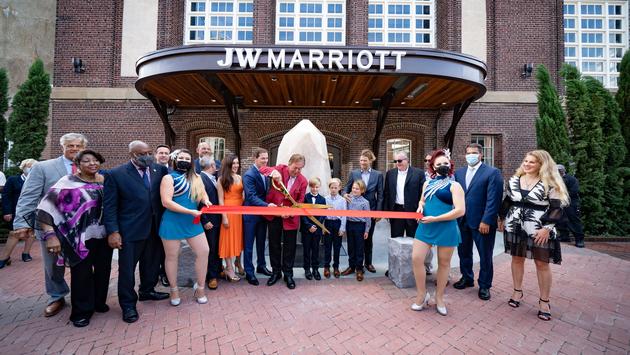 The new district is Savannah’s fifth official district and allows guests to experience two unique hotels within the JW Marriott Savannah: romantic and elegant styling in the Three Muses building and historic chic architecture in the Power Plant building.

Phase II will debut in the autumn with more restaurants and lounges. Phase III, coming spring 2021, will debut a second hotel, The Atlantic, as well as a concert venue.