ACAPULCO, Mexico — At the opening ceremony of the 44th
annual Tianguis Turistico, tourism executives minced no words about the new
president’s dismantling of the Mexico Tourism Board.

Addressing President Andres Manuel Lopez Obrador, who was in attendance, Luis Barrios Sanchez, head of the
National Association of Hotel Chains, said in his opening remarks, “You
have distinguished yourself by your tireless struggle to improve the conditions
of the less favored. Do not doubt, Mr. President, our commitment is to
accompany you in this task. … It is good to remember that in addition to
everything said, tourism is a key piece in the economy.”

Sanchez went on to say that tourism contributes 8.8% of the
country’s GDP.

“We cannot ignore that the United States is and will
continue to be the main tourist client of the country, representing 60% of air
tourism and practically all land and border travels,” he said.

The past year was a challenge for Mexico tourism. Air
capacity fell by 1.7 million seats in 2018. Meanwhile, Sanchez said, the
Bahamas, Jamaica, Puerto Rico and the Dominican Republic added capacity.

“We need your support to have capital to carry out
Mexico’s tourism promotion,” Sanchez told the president, to applause from
the audience.

Sanchez praised the plan for a Mayan train route on the Yucatan Peninsula,
asserting that it will bring new visitors to the southeast of the country and
open up previously hard-to-reach sites. 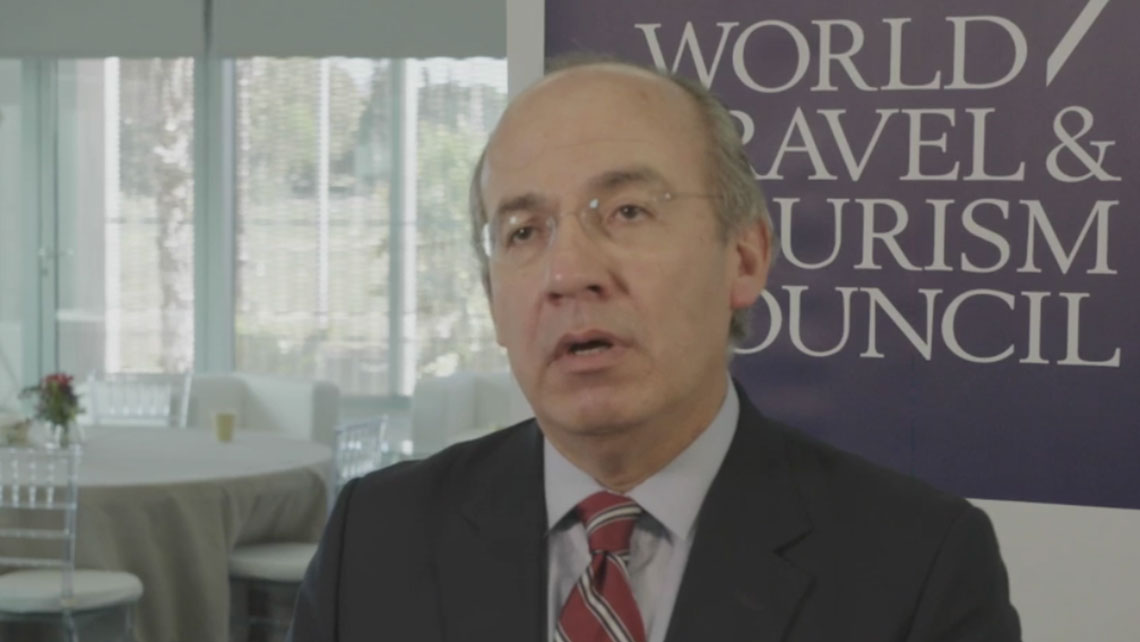 In a video interview at the World Travel and Tourism Council’s Global Summit, Felipe Calderon urged current president Andres Manuel Lopez Obrador to “reflect” on the importance of tourism to Mexico’s economy and perhaps “reverse” his decision to dissolve the Mexico Tourism Board.

“However, the financing of this work cannot leave
behind the effort of attraction of tourism,” he cautioned.

In order to sustain Mexico’s ability to compete for foreign tourists,
Sanchez asked the government to contribute $125 million per year, about 0.5% of
the revenue tourism brings to Mexico.

Lopez Obrador was the last speaker to take the stage, and
while he did not directly respond to Sanchez, he delivered a prepared statement
regarding tourism.

“To reiterate what has been said, tourism is
fundamental because it produces wealth, but also tourism distributes wealth,”
he said. “That is why the commitment to support tourism is sincere.”

Lopez Obrador did not address the dismantling of the Mexico Tourism Board. He did say that the
government is emphasizing two actions that will help to increase tourism. One
is the urban development of tourist cities, and the other is reducing crime.

“Here in Acapulco, for example, [the city] has already
started an urban development program in El Renacimiento neighborhood,” he
said. “We have committed resources for urban development, introducing
water drainage, improving the streets, putting in public lighting, expanding
and creating centers for recreation and also public safety.”

In terms of safety, the new government has unanimously
approved the creation of a National Guard, which will involve both the army and
the navy. The government is uniting the military police, naval police and
federal police, as well.

“Every day, from Monday to Friday at 6 in the morning,
we are receiving the daily report of what has happened throughout the country,
and the same thing is being done by governors who are working in the same
coordinated manner,” he said. “All of this is going to bear fruit. It
will help us to lower the incidence of crime and will help Mexico remain a
country visited by foreigners.”

United pays passengers $10,000 each to downgrade on overbooked flight

$131,000 donated to Make A Wish at Dream Vacations National Conference ·