Home » Destinations » ‘Delicate sense of terror’: what does concrete do to our mental health?

“Sous les pavés, la plage!” exclaimed Parisian protesters in May 1968: “Under the paving stones, the beach!”

Cities, they believed, were drowning in concrete, suppressing the hedonistic spirit and revolutionary potential of the people who lived in them. Fifty years later, the inner-city borough of Hackney in east London is employing its own “postcode gardener”, Kate Poland, to encourage local residents to dig up concrete and stone and replace them with trees, climbing plants and flowers.

Poland is also working with Friends of the Earth, whose 10xGreener project aims to reintroduce greenery into urban areas that have seen a rapid increase in concrete coverage, which contributes to the “heat island effect” and increases flood risk.

What is Guardian concrete week?

This week Guardian Cities investigates the shocking impact of concrete on the planet, to learn what we can do to bring about a less grey world.

Our species is addicted to concrete. We use more of it than anything else except water. Like that other manmade wonder material, plastic, concrete transformed construction and advanced human health. But, as with plastic, we are only now waking up to its dangers.

Concrete causes up to 8% of global CO2 emissions; if it were a country it would be the world’s worst culprit after the US and China. It fills our rubbish dumps, overheats our cities, causes floods that kills thousands of people – and fundamentally changes our relationship to the planet.

Can we kick our addiction, when it’s so hard to imagine modern life without it? In this series of articles, Concrete Week will explore the impact of the material on our environment and us, and look at alternative options for the future.

“[People] haven’t quite adapted to concrete,” she says, arguing that her work as an urban gardener doesn’t just help the environment but improves wellbeing, too.

Antipathy to the “concrete jungle” is rooted in the assumption that concrete-heavy environments are by nature detrimental to psychological health. One study of more than 4 million Swedes, published in 2004 in the British Journal of Psychiatry, seemed to suggest that moving from a rural to an urban environment had a detrimental effect on individuals’ mental health. Researchers at Exeter University, meanwhile, have used data from the British Household Panel Survey to show that mental health is improved in the long term by moving to greener areas.

And in 1985, Alice Coleman, a geographer at King’s College London, took the theory so far as to publish Utopia on Trial, in which she sought to lay the blame for antisocial behaviour and crime on the design of 1960s modernist estates. She even got a tower block knocked down in outer Birmingham and replaced with a village green in order to show that it would “improve” the estate it stood in. 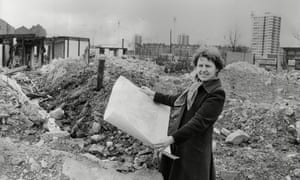 It is true that, having grown up on a 1960s estate, I remember feeling oppressed by the literal hardness of the environment, in spite of its relatively rich landscaping and nearby park. I couldn’t escape a sense that the road, the pavement and the blocks of flats were, most of the time at least, the same colour as the sky: concrete-grey.

But perhaps the cause of my ill content, wasn’t concrete, per se? Has the material been made a bogeyman for the urban environment – assumed to be harsh and unforgiving, rather than liberating and inclusive – when many of the problems it seems to embody are more directly related to how inequality and segregation manifest in cities?

John Grindrod, author of Concretopia, about Britain’s postwar rebuilding effort, and Outskirts, on the green belts surrounding British cities, interviewed his brother Ian about the “very moment” Ian developed agoraphobia. The family had just moved from an inner London block of flats to a maisonette on a relatively bucolic estate right at the edge of the city. Ian hated the change: “I remember it, having to walk backwards under a tree because it was too big. Too much sky. So much sky!”

Indeed, far from condemning concrete, Concretopia was a full-blooded celebration of the material. What Grindrod’s brother was lamenting was, effectively, the segregation of working-class council tenants from private homeowners. Throughout the postwar era, working-class city dwellers were systematically dispersed to peripheral areas as though it were a banishment, an enforced quarantine for which no mod cons could compensate.

Indeed, Coleman’s attempt to blame modernism for crime was almost immediately debunked by researchers who showed that low levels of wellbeing and social cohesion were also found on greener, prewar cottage estates. Poverty and social segregation, they argued, were the real culprits.

The wellbeing assumption itself was firmly challenged as recently as a 2018 article in the journal Health & Place that examined whether mental health was improved by programmes designed to make neighbourhoods “nicer” – that is, with less concrete. It found no evidence of “an effect on mental health from ‘urban regeneration’ and ‘improving green infrastructure’” initiatives. Still, the conflict rages on.

In 1983, the architect James Dunnett wrote of his former employer Ernö Goldfinger’s high-rise Balfron Tower in east London that it evoked a “delicate sense of terror”, and speculated that the Hungarian architect “had chosen as a source of inspiration the artifacts of war”. 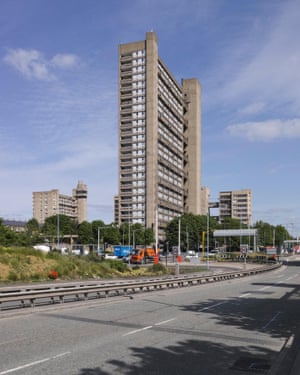 My husband lived in Balfron’s accompanying block Carradale House for several years, and my memories of that time are annotated by the sound of the wind whistling through great gaps in the windows and the neverending rush of cars along the Blackwall Tunnel approach.

I can vouch for feeling a delicate sense of terror when visiting Carradale in the late 1990s: for example, when presented with human poo in the only working lift, or seeing local children negotiate used nappies and broken bottles in the play area outside. These are hazards relating to situations where hundreds of people live cheek-by-jowl but often don’t see each other from one day to the next – and that itself has less to do with concrete and more to do with a concatenation of postwar planning decisions.

This small area of London’s East End was ruined more thoroughly by the building of roads than of council flats, though both relied on concrete. Balfron, Carradale and the approach roads were all completed between 1967 and 1973, creating a new swath of the city where community life became secondary to the rapid movement of traffic. The nearby Aberfeldy estate, today being redeveloped with a high proportion of private rented housing, is even more trapped in space, hemmed in by congested A-roads. It is in areas like this where the accumulation of concrete, in the form of roads, flyovers, subways or flats, poses the greatest threat to wellbeing.

Birmingham’s Inner Ring Road, the scorched-earth centrepiece of the city’s urban motorway system, showed signs of concrete decay as early as 1977, while the adjoining Gravelly Hill Interchange – better known as Spaghetti Junction – was met with anti-pollution demonstrations soon after its opening in 1972. A year later, the incoming editor of the Architects’ Journal, Lance Wright, lambasted “badly fitting buildings [with] grotty concrete steps, cheap, twisting aluminium trim, rough precast concrete panels, like giants’ breakfast food” that contributed to a sense that much of the the postwar landscape was moulded on the cheap. 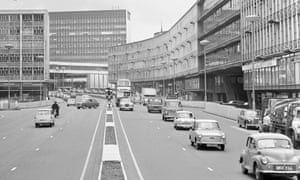 Yet, as Grindrod points out, in the lean decades after the war, concrete was often used experimentally to build urgently needed housing, and in direct response to shortages of traditional materials and skilled labour.

Others go further, arguing that the legacy of concrete is nothing short of the success of the welfare state, reliant as it was on a creative and transformative physical infrastructure. “If you look at early 20th-century rates of child mortality in Birmingham – these things saved lives,” says Otto Saumarez Smith, a historian of postwar British planning at Warwick University, of concrete buildings. “Nebulous ideas about ‘community’ look small compared to that.”

‘Concrete? It’s communist’: the rise and fall of the utopian socialist material

This is the point: getting people housed in better conditions was a job that had to be done. “At the time, a lot of people didn’t necessarily believe that they were long-term solutions,” says Grindrod of the huge 1960s estates he and I lived on. “They were seen as stopgaps to getting somewhere – they weren’t designed to be there in 400 years.” The same goes for now-desirable Victorian terrace houses. Balfron Tower, with its bespoke concrete design, is today being turned into luxury housing.

If improving physical health was the great public health challenge of the 20th century, then improving mental health will be the challenge of the 21st. We know that’s not going to happen without a greater measure of equality, which has nothing to do with concrete. As cities across the world continue to expand to accommodate ever more people, rapid building methods and prefabrication are often needed to deal with problems that have more to do with entrenched poverty and spatial inequality than with the methods – and the material – we prefer to demonise.

Barnabas Calder, a senior lecturer in architectural history at Liverpool University and the author of Raw Concrete (2016), a history of brutalism, believes it is the socioeconomic position of the people who use buildings that really matters when it comes to how different kinds of architecture are valued.

“If you obliged social housing tenants to live in Blenheim Palace they would rightly complain, but if you put the Duke of Marlborough in it he would do just fine,” he says. “Because he has the money to make a civilised living environment anywhere. Whereas poverty can make anywhere a living hell.”

This $5 packing secret is changing lives

This Airline Is Finally Returning Service to Delaware