It’s lunchtime in Huancarani, an altitudinous village near the city of Cusco, and I’m peeling the scorched skin off a baked potato, then slathering it with freshly made spicy salsa, uchucuta. The refuelling is welcome – we’re 3,850m above sea level, here at farmer María Pinchi’s homestead, and as well as the lack of oxygen at this altitude, we’ve just built an oven from scratch, just as the Inca did six centuries ago.

Peru is known for its tubers – around 3,800 potato varieties are grown here, spanning the colours of the rainbow. So who better than to teach me about cooking a Peruvian staple than María, who grows them?

A local leader in her village, María works with various projects to ensure her Andean community remains sustainable; one of the projects is NGO Sierra Productiva, which links farmers with fair trade restaurants and hotels around Peru – and now arranges cooking classes for tourists, too.

We meet in San Jeronimo, a short taxi ride from Cusco: me, Sonia Taco (a coordinator for Sierra Productiva) and my fellow tourists, Allan and Etheon. From here, we squeeze onto a public minibus to reach Huancarani, Maria’s village. The driver – right cheek bulging with coca leaves that he sucks on for energy – takes the tight bends up into the Andes with ease. It’s hairy in places, but the view down into the lush valley, sun twinkling on the Urubamba River (which also passes Machu Picchu), is magnificent.

From the Huancarani bus stop, we walk a few dusty blocks to María’s place. Petite and robust, speaking a mixture of Spanish and Quechua (a local language that was used by the Inca), 63-year-old María is used to receiving guests. Top Peruvian chef Virgilio Martínez from Lima’s Central, ranked fifth in the world’s 50 best restaurants in 2017, drops by when he’s in the area. The NGO, however, is careful not to bring visitors more than once a week so that tourism doesn’t become too regular a source of income.

Adobe brick walls surround the homestead where she and husband Julián live, tending to their orchard and raising guinea pigs. She points towards a lofty green mountain; her other, larger farm is on the other side of that peak, and I’m out of breath just looking at it.

Her lush garden is full of broad beans, huacatay (black mint), coriander, rosemary, artichokes, spring onions and numerous varieties of potato. And although she has two kitchens – both with an oven – inside, today, she’s teaching us how to build an adobe-brick, single-use oven, an Inca cooking method called huatia.

We start up with breakfast: papa chuño (freeze-dried potato from her garden), boiled egg and two types of potato, the yellow mactillo and the floury white compis. Tea is brewed with home-grown herbs. The sun, the mountain air, the carb intake, all signs point to a siesta – except it’s time to start prepping lunch and that means building the huatia.

María thrusts some adobe bricks, which Julián made earlier, into my hands. Handing Etheon a pickaxe, she asks him to break them up into chunks; with the thin air at altitude, he’s short of breath after just a few minutes.

I, meanwhile, help her assemble the huatia, placing the broken chunks of adobe in an open circle about 45cm in diameter, then building on top of each row; María monitors me, sometimes moving bricks when she’s not convinced by my positioning. She shows me how to create the curved roof, with pieces large enough to touch both sides, yet light enough to not fall. Mission accomplished, she places some twigs inside the oven, and lights them. Peering inside every few minutes, she checks the colour; once all the bricks are charred, the potatoes can go in. 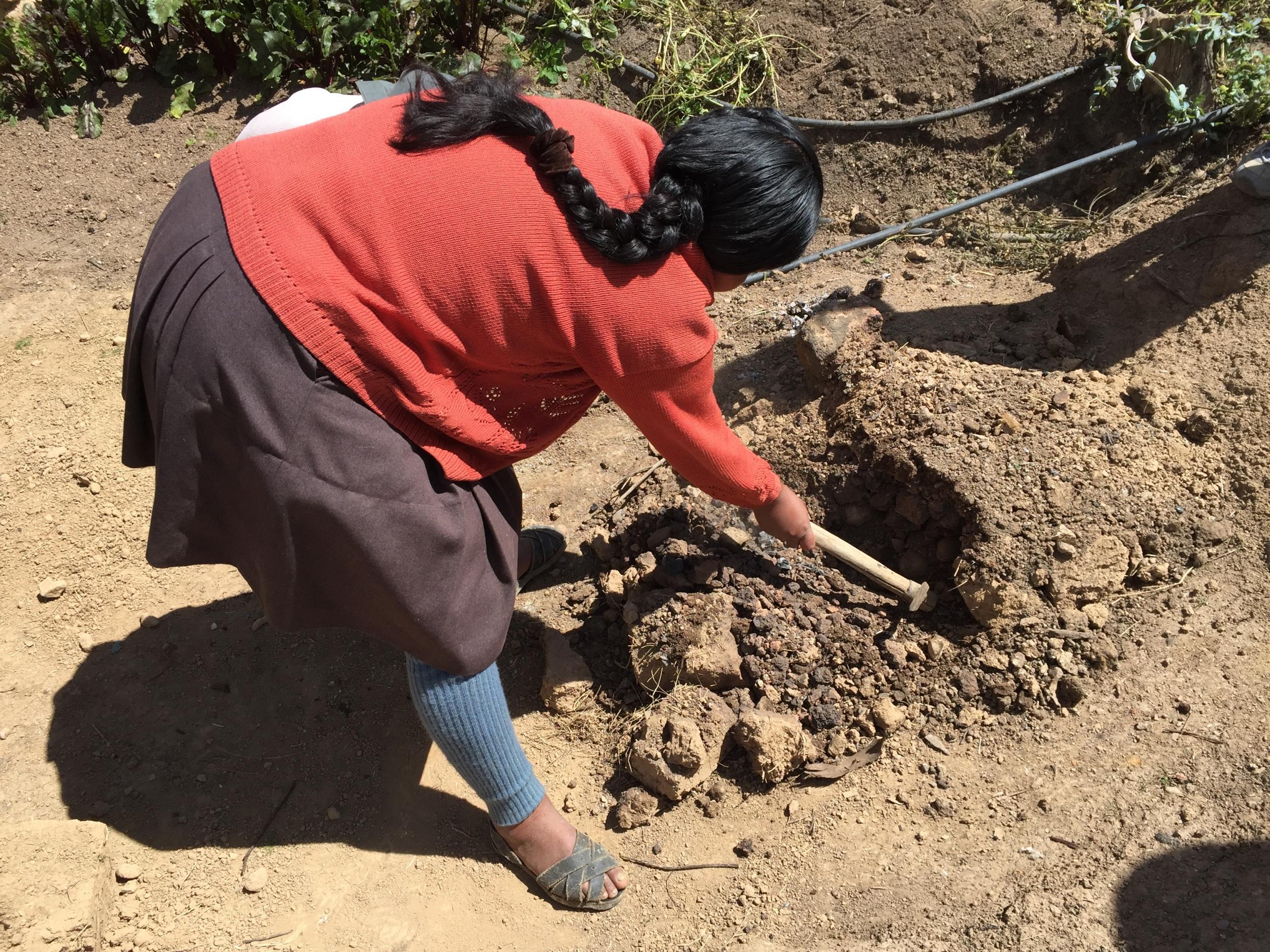 Ah yes, the tatties. Where were they again? An innocuous-looking heap of leaves needs pulling out of the ground; while it’s the vegetable that feeds Peru in dishes such as causa, papas a la huancaina and cebiche, potatoes aren’t the sexiest-looking veg. Winded by the exertion, we pull up two plants, giving us three kilos of compis potatoes. Lunch is on the way.

Having shaken off the dirt and popped them in the oven, María suddenly breaks down the carefully constructed roof with her pickaxe. This way, the papas bake on both sides, with no need to turn them – meaning we can leave the huatia to its own devices for an hour and pick herbs and chillies for the salsa uchucuta.

Once they’re done, María uses a hoe to remove the bricks, picking out the oven-baked potatoes with a cloth. The bricks lie scattered on the ground, and the embers start to cool. As a disposable cooking vessel, today’s huatia has served its purpose. Time for lunch.

There are no direct flights from the UK. Avianca flies to Cusco via Bogotá, or KLM flies via Amsterdam to Lima, where you can catch a 90-minute flight with LATAM to Cusco. From Cusco, take a taxi to San Jeronimo, 20 minutes’ drive away (£3). The minibus to Huancarani takes 30 minutes and costs £1.80.

It’s easiest to stay in Cusco – Hotel Rumi Punku has doubles from £66, B&B.

Our amazing planet photographed from the skies

This Is the Tallest Mountain That Has Never Been Climbed