I wake up to a commotion. It’s the middle of the night and it sounds like a crowd of people are yelling in the street below my flat. Then I remember I’m not in my flat and those aren’t people, but frogs.

Spawned in vast ponds left by the recent rains, what sounds like thousands of them are croaking into the night, backed by a cacophony of crickets. It’s so loud that the walls of my cabin seem to be made of paper instead of mud. Peeping outside, I can’t imagine so many creatures lurking in the near-total darkness, the only light coming from a jaw-dropping canopy of stars above. Welcome to the Casamance.

The bulk of Senegal’s one million tourists a year head for the Petite Côte, south of Dakar, where luxury resorts have been springing up lately. It wasn’t always this way. Back in the 1970s, the country’s emerging tourist hub was in the Casamance region in southern Senegal. Then came the Casamance separatist movement of the 1980s, and although foreigners were rarely caught up in the sporadic conflict, airlines stopped flying here and most of the hotels closed. 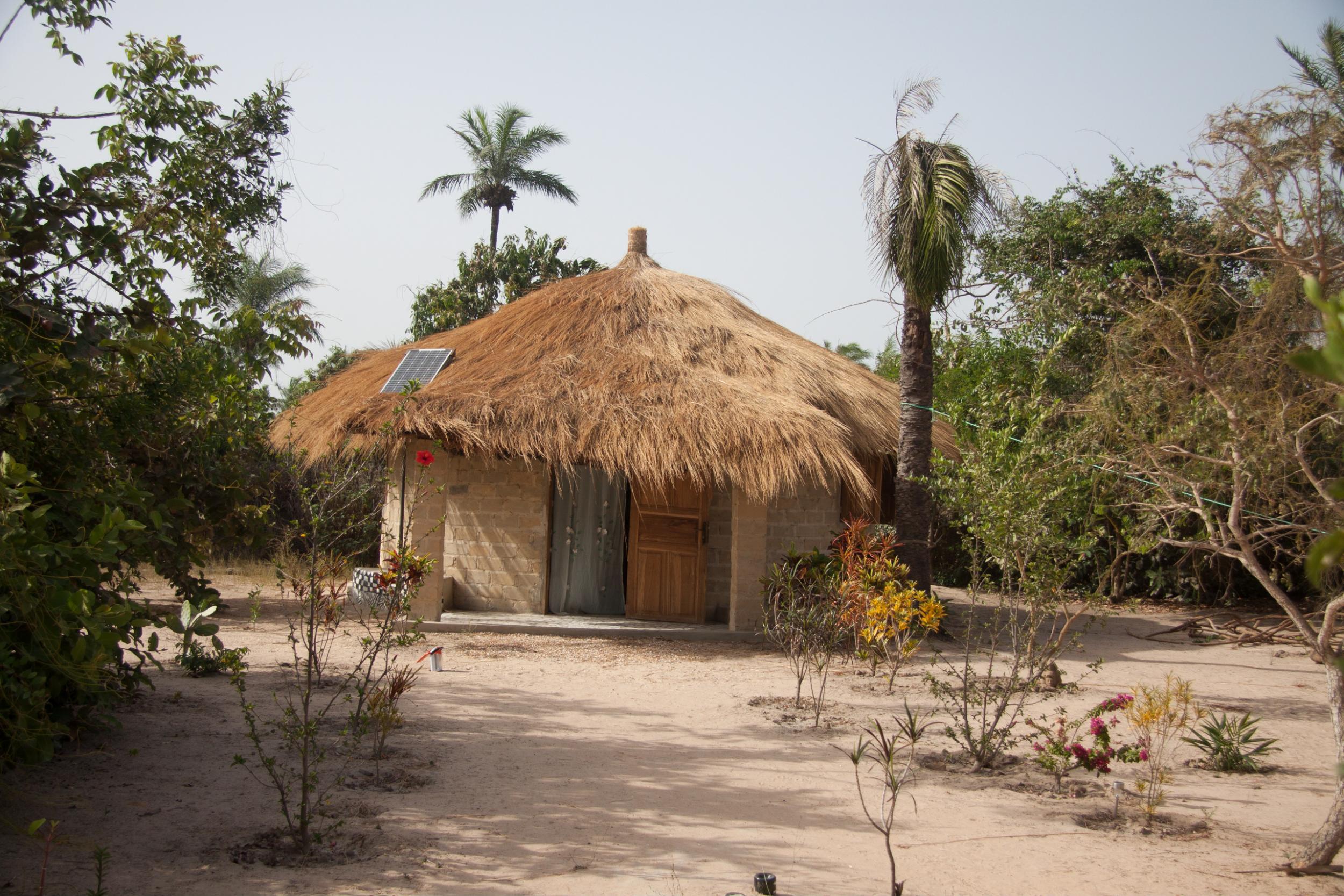 “Mention a separatist struggle in Africa and of course people panic,” says Simon Fenton, whose eco-lodge in Abene is the setting for my late-night encounter of the amphibian kind. “But I’d say you’ve more to worry about on a night out in parts of London than you would here.”

All has been calm in the Casamance for years, and as the Senegalese government and separatists have now signed a peace agreement, Oxford-born Simon is banking on a tourist revival. After building a traditional thatched home here, he added a few huts for visitors and opened the Little Baobab in 2013 with his Senegalese wife Khady Mane. He says more tourists are coming to Abene every year.

Not far from the border with Gambia – which in a quirk of colonial history separates the Casamance from the rest of Senegal – this “town” consists of little more than a dirt track with a few basic cement structures strewn along it, jungle sprawling on either side. At the end of the “main road” I reach a wide, empty beach, where the white-hot sun soon drives me into the crashing Atlantic waves. The only signs of humanity are a shack and some beached fishing boats. 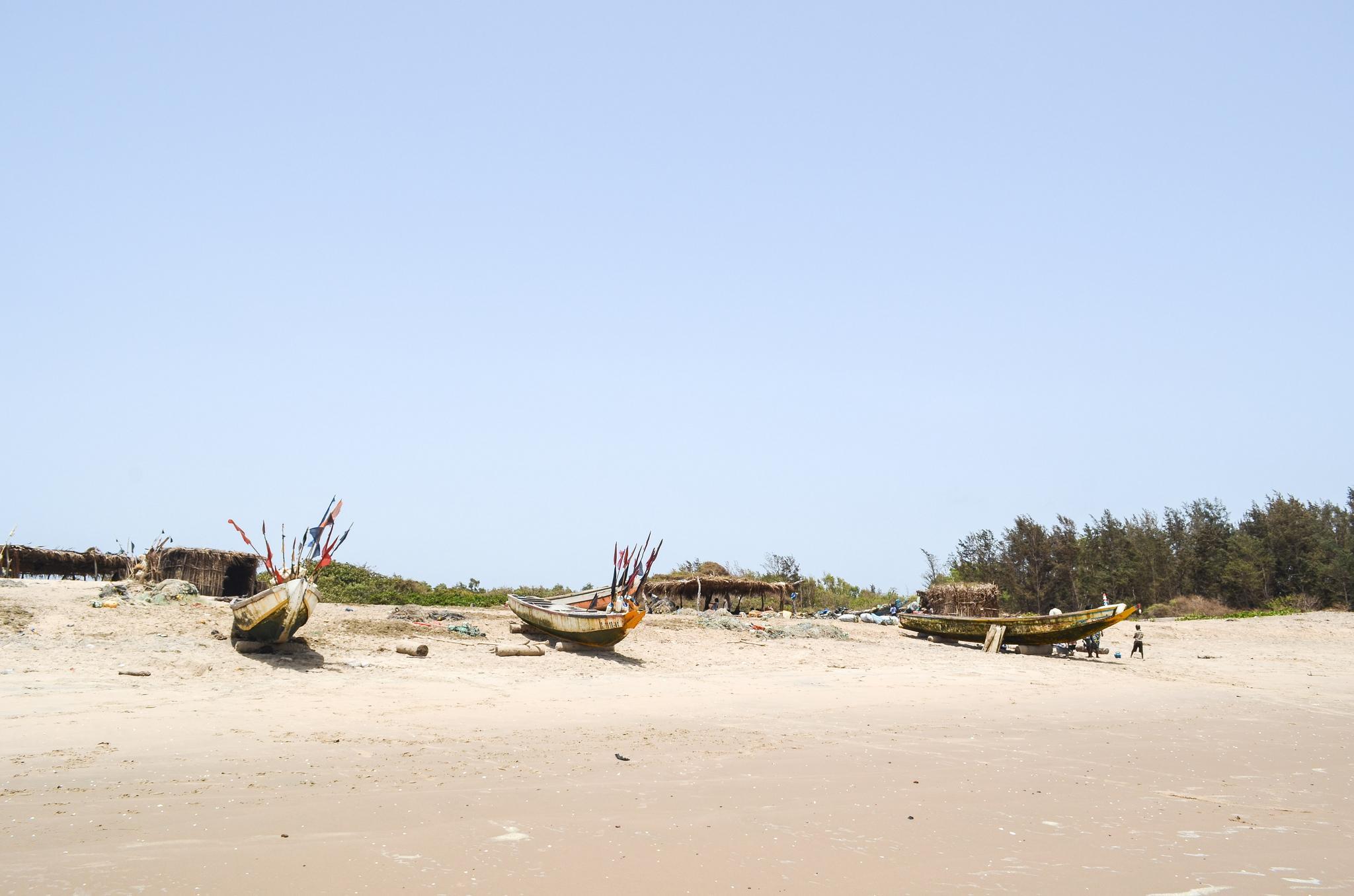 Khady assures me that in December Abene is full of life. From 26 December to 2 January, the town hosts Abene Festivalo, an increasingly popular festival in which Senegal’s various ethnic groups showcase their traditional music and dance. While Abene is mostly Muslim, the age-old traditions of the Diola people remain paramount. Like most children here, Khady and Simon’s two lively sons wear gris-gris – necklaces and bracelets that ward off evil.

I learn more about this when Khady leads me off the main road, down a track to Bantam Wora, Abene’s sacred tree. It represents a fusion of Islamic and animist belief, with Sufi holy men performing various mysterious ceremonies here. 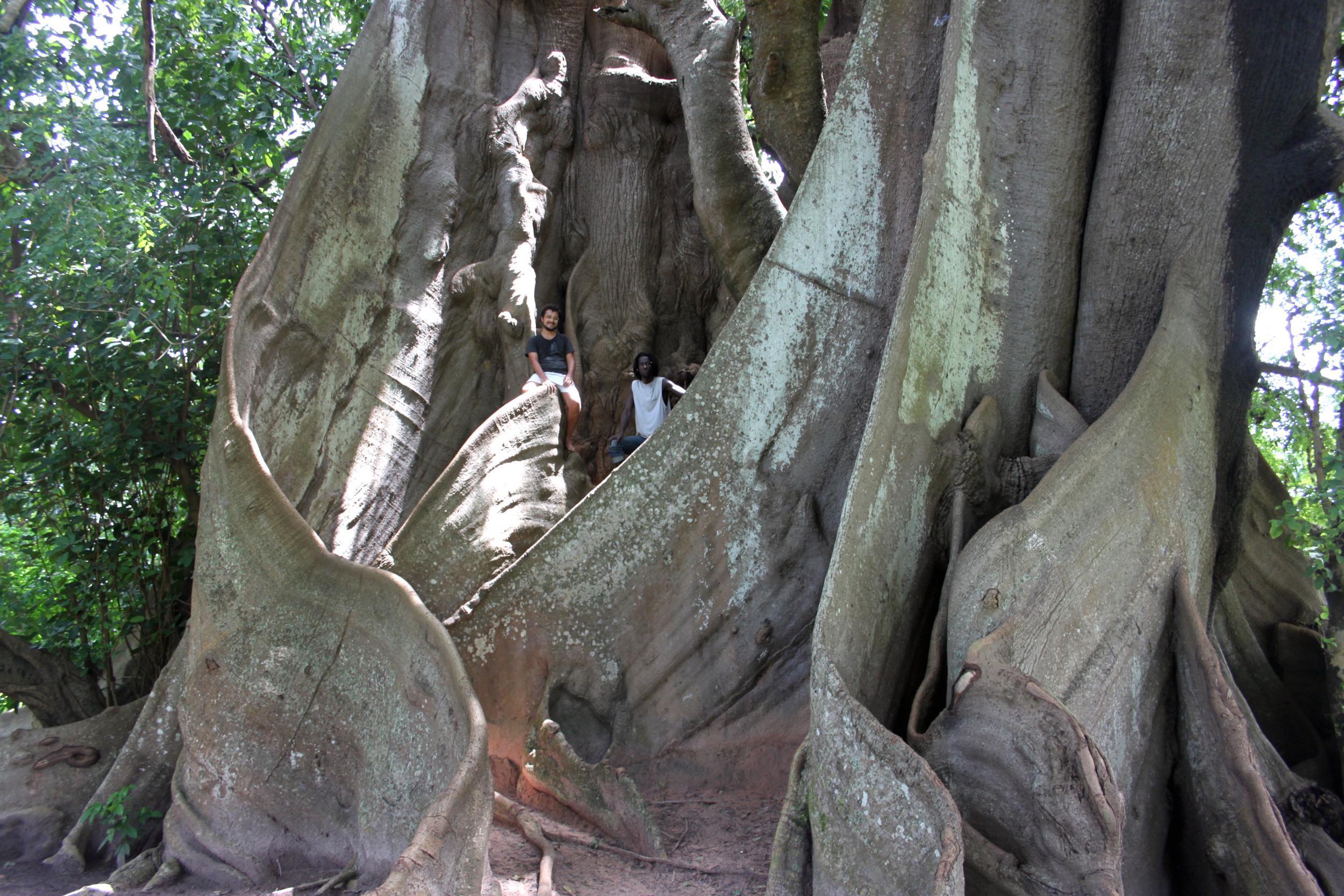 On closer inspection, the mighty ceiba is in fact six trees. “The different trees grow together. Senegal is the same – Diola, Mandinka, Wolof, Muslim and Christian. Living together. No problem,” says the resident guide, Amdou, who for a few coins will tell you all you need to know about the Bantam.

A few days later, I’m hurtling south from Abene in a “sept-place”; battered old station wagons like this one are the main form of transport in the Casamance. After being crammed in with six other passengers for two hours, and humidity outside nearing 100 per cent, I cross the wide Casamance River and arrive in Ziguinchor, where I decide to reward myself with a night in the regional capital’s best hotel. An oasis of calm from the relative bustle, Hotel Kadiandoumagne has a beautiful garden promenade, with steps leading up to a pool overlooking the mangrove-lined river. 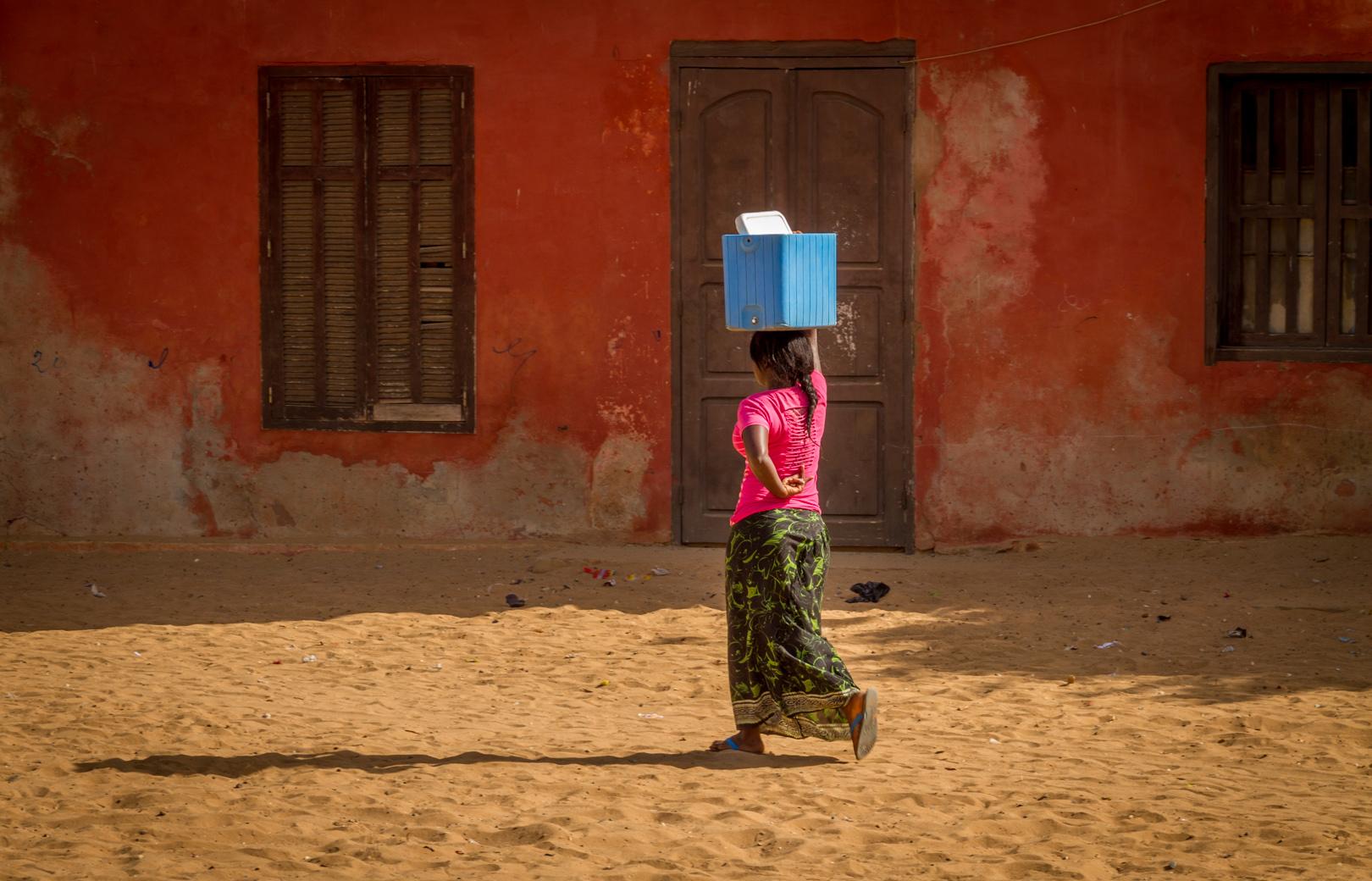 The next day, driving south from Ziguinchor towards the Diola king’s hometown of Oussouye, scents of mint and mango enter the car windows. Jungle teems on either side and tropical birds glide above. The roofs of mud huts can be glimpsed through the thick vegetation, so green I’d think it radioactive if this were Europe. Old women plod the side of the road balancing large baskets atop their heads, while machete-wielding teenagers vanish between the slender palms.

Like Abene, the real Oussouye is scattered through the trees – a mix of cashew, mango, banana and ceiba. There’s nothing like exploring it by bicycle, says local guide Carlos, and so we spend an afternoon trundling down beguiling jungle tracks, stopping at villages known for their pottery and woodcraft. Most fascinating of all are the religious “fetishes” attached to several houses. Ominous horns hang above these shell-studded altars, used for various rituals. While the northern Casamance is largely Muslim, Oussouye is Catholic, but animist beliefs thrive beneath the Christian veneer, Carlos says. As in Abene, the people see no contradiction in this. 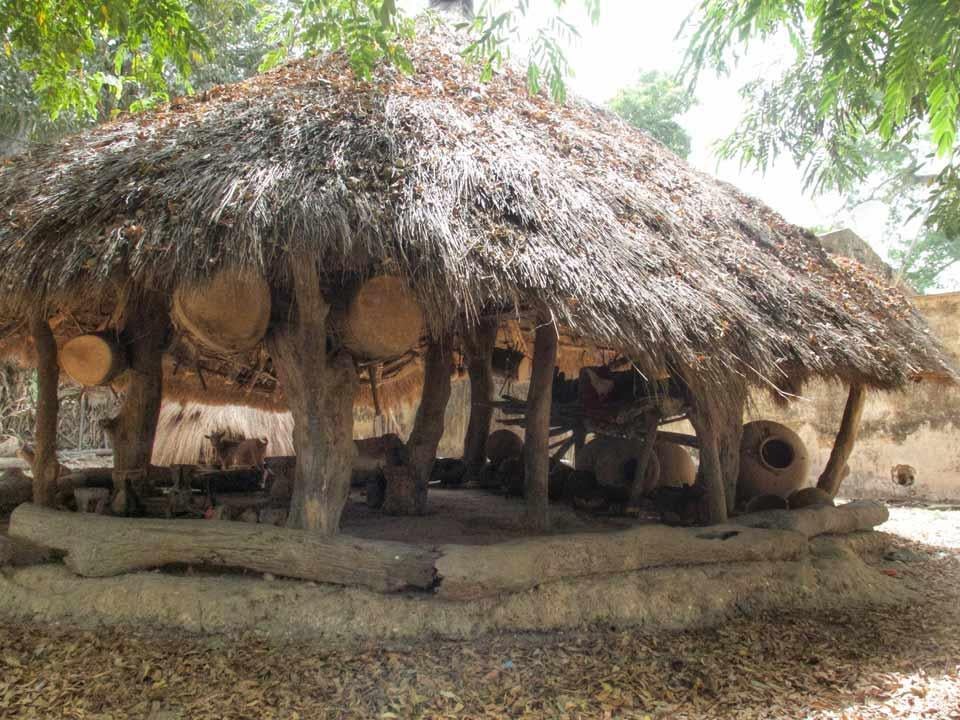 Soon I’m back on the Atlantic coast, in Diembering. This tranquil village is a short drive north of Cap Skirring, where nature has half-swallowed the former resorts – except Club Med, which reopened in 2010. Over a dinner of grilled fish at Akine Lodge, French owner Anne Gavietto explains how much things have changed since she settled here 14 years ago with her Senegalese husband. Although she never felt afraid during the conflict, the rattle of Kalashnikovs could sometimes be heard in the dead of night.

Waking early the next day, again I am temporarily convinced I’m in my flat and it’s the start of the morning traffic I can hear swooshing outside. Instead it’s the shattering of waves a stone’s throw from Akine Lodge. Walking to the main plaza for my pickup to Ziguinchor airport, I stop to admire a big orange sun rising on the edge of a lagoon behind a blooming baobab – Senegal’s national symbol. There aren’t views like this back home.

Tap Portugal (0345 601 0932; flytap.com) flies from Heathrow, Gatwick and Manchester to Dakar via Lisbon. Once in Dakar, you can book an internal flight to Ziguinchor with Transair or an overnight ferry. Advance bookings are unreliable and not advised.

When will we be able to travel abroad?

Magic Monday: City breaks from €244 in our Top 5 travel deals!

Frontier Is Giving Away Free Flights, but Only to People With This Last Name

Recipe of the week: Risotto with gorgonzola, pears and crispy ham