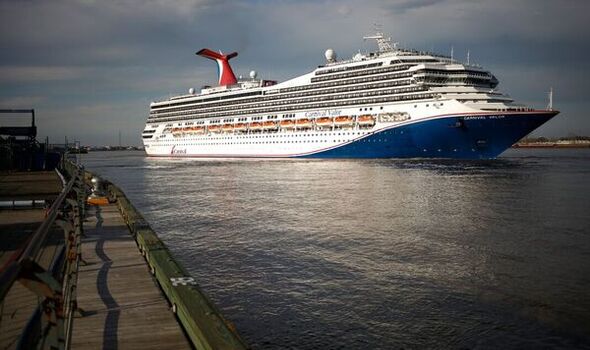 James Michael Grimes, from Alabama, went missing on November 24 after falling from a Carnival cruise ship into the ocean. The man told ABC he had left the bar to use the toilet and woke up in the ocean, unable to see the ship.

Grimes said had forced himself to try to “stay positive” and felt that he had been given a chance after surviving the fall.

He said he had tried to convince himself that people would start looking for him and would find him eventually.

Grimes was rescued by the US Coast Guard just before 8:30pm the day after he fell and said he had been treading water for 20 hours.

The man told ABC News that he had a few drinks when he disappeared but wasn’t drunk at the time.

During his time in the water, Grimes said he swam through jellyfish and watched the sunrise while he sang songs to keep his spirits up.

He said he had lost 20 pounds during the terrible experience and was determined to keep swimming until he couldn’t anymore.

Grimes said he had battled with confusion and fatigue as well as a sea creature that “bumped” one of his legs.

He said he didn’t believe it was a shark but that the creature scared him and had a fin and a flat mouth.

Richard Hoefle, a member of the US Coast Guard, said that when they found Grimes, he was exhausted.

The Coast Guard said Grimes had only about a minute and a half left to live and had “nothing left” and “no energy”.

Hoefle added: “My best guess is that he had between a minute and 30 seconds left before we lost him completely.

“He just had an incredible will to survive. And he did whatever he had to do.”

It is unclear how Grimes fell from the ship and cruise ships usually have barriers to stop people from calling.

The Coast Guard told ABC News: “Guests should never climb up on the rails. The only way to go overboard is to purposefully climb up and over the safety barriers.”

However, while it is rare for passengers to go overboard on cruise ships, there have been several incidents.

According to statistics from Cruise Junkie, there were 26 reported incidents in 2019 while in 2015, 27 people fell from cruise ships.

Jim Walker, a maritime lawyer who represents passengers and crew members injured or assaulted on cruise ships, previously told Express.co.uk that many passengers are never found.

He said: “When someone goes missing, it can be extremely unlikely they’ll ever be found. A lot of cases could accurately be called mysteries.

“There are no records or videotapes of what happened. A lot of the time people won’t even realise someone has gone overboard until the ship gets into the next port.”

Grimes said that he was planning a trip to New Orleans to meet the Coast Guard crew who rescued him.

How to Choose: Expensive vs Inexpensive Cruise Lines

Holland America to Host Cruise for Alzheimer Patients and Their Caregivers