On the last full day of my four-day Amazon River cruise on Aqua Expeditions’ Aria, I found myself seated in a homemade dugout canoe, alone except for a local woman who silently but smilingly rowed along the “shore” while I snapped photos.

I put “shore” in quotes because the trip coincided with high-water season, which runs from December through May, when dry land is scarce and what looks like green pastures is actually clusters of floating vegetation.

I snapped photos of hyacinth and white herons as we moved quietly through the river until a motorized skiff pulled up alongside and a guide from the Aria handed me a bottle of chilled water, then sped off in search of other thirsty passengers, each in his or her own canoe.

This contrast between roughing it and comfort symbolizes everything that made the trip special and memorable for travelers like me who want to experience authenticity but whose days of backpacking for miles and sleeping on hard ground are far behind them. 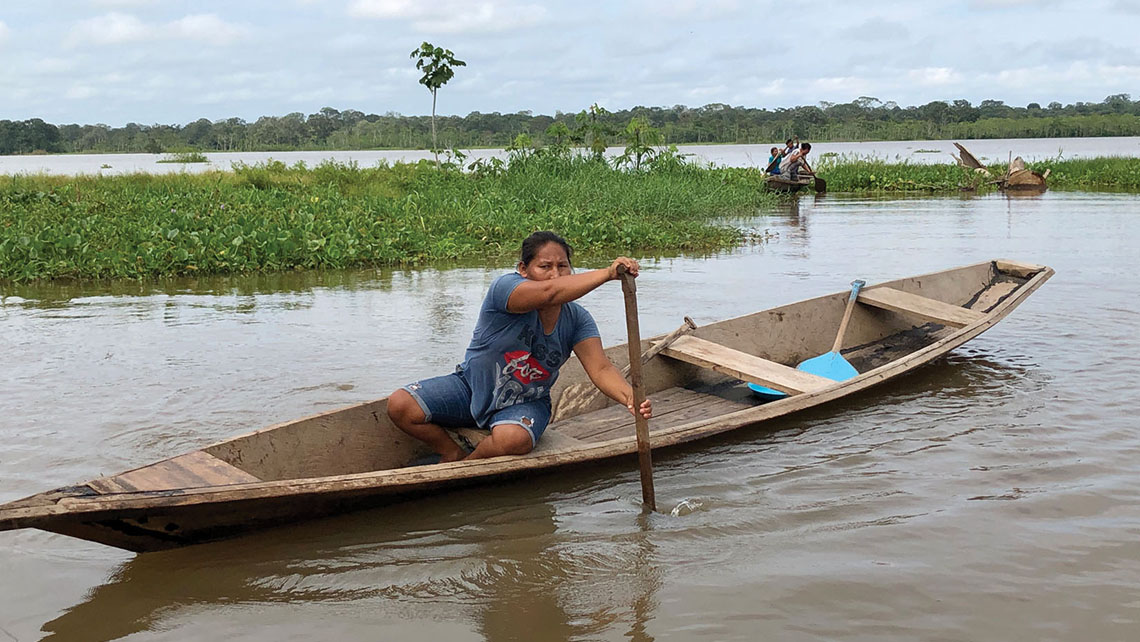 What I was looking for was an opportunity to explore this untamed region of the world; interact with locals in a nonintrusive way; sample the cuisine (ask any foodie and they’ll tell you that Peruvian dining, especially when it includes fish and other products from the Amazon, is very hot right now); and, above all, see animals in the wild.

In just four days, we accomplished it all.

The custom-built Aria, which features 16 air-conditioned staterooms, each measuring 250 square feet and four of which can be interconnected, set the tone for what was to be a luxury onboard experience from start to finish.

My cabin featured one whole wall of floor-to-ceiling windows looking out at the water and jungle, a seating area, a California king bed and an open vanity and shower area.

The ship does not have locks on the stateroom doors, although passengers can request one, but there are minisafes in each cabin.

The lack of WiFi, TV and reliable cell service only added to the authenticity, although there was a satellite phone in case of an emergency. 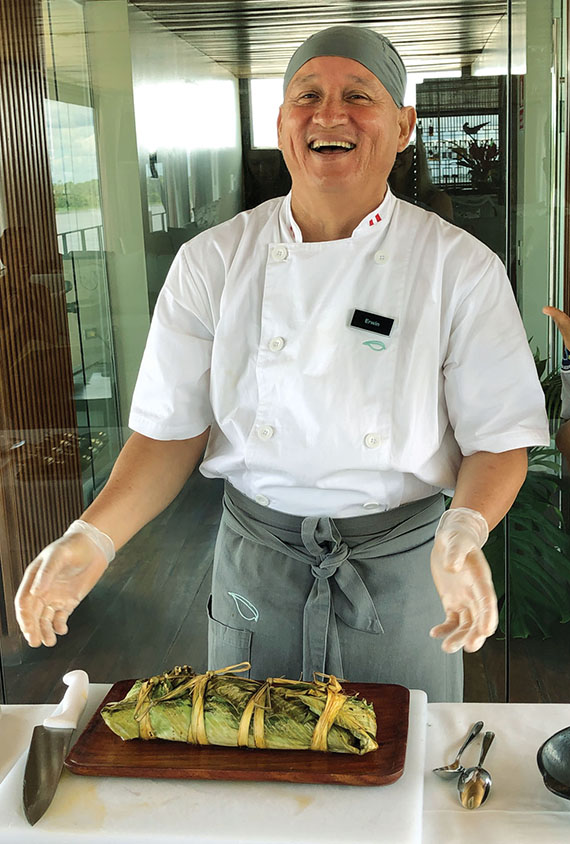 The main indoor lounge area was the meeting point for various social events, including a cooking class, lessons in making pisco sours and other regional cocktails and a musical performance by the staff on the last night.

Outside were lounge chairs and a hot tub.

Alcohol is complimentary, and elegant hors d’oeuvres were often served at cocktail hour.

Meals, taken buffet style and from a menu in a dining room surrounded by windows, included locally sourced fare that ranged from the sophisticated, such as ceviche and paiche poached in bijao leaves, to the rustic, such as caramelized plantains, gnocchi made from yucca and all manner of fruit. The menu was created by consulting celebrity chef Pedro Miguel Schiaffino, a champion of using Amazonian ingredients in high-end Peruvian cuisine who works with river communities to improve fish farming to rehabilitate the population of native paiche fish.

The ship also has an observation deck, a tiny workout area, spa room, boutique and infirmary.

Despite the creature comforts, the real draw, obviously, was our exploration of the Peruvian Amazon and the Pacaya-Samiria National Reserve, which we accomplished in eight-person skiffs equipped with comfortable, forward-facing seats with backs.

There were three naturalist guides, who aside from keeping us comfortable, safe and entertained with anecdotes about local culture were adept at making sure we didn’t miss the animals we were there to see, including sloths, monkeys, pink dolphins and a stunning variety of birds. 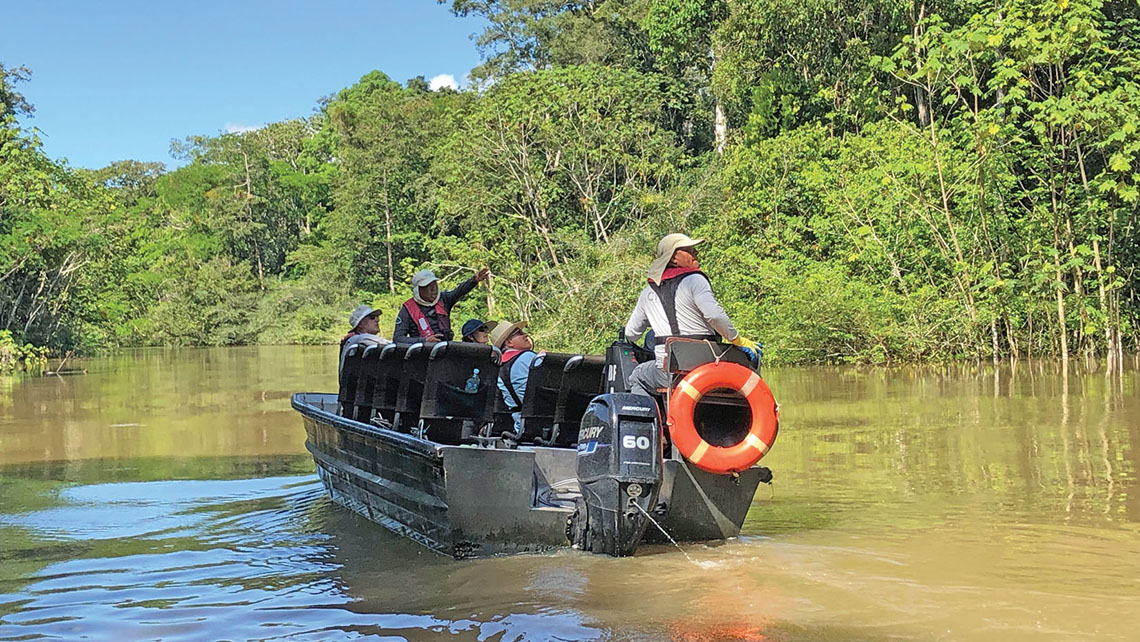 Each of the guides had his own way of pointing out animals hiding in the trees. One of the guides used a laser, one used clock terminology such as, “heron at 3 o’clock,” and my favorite, the guide who would simply move my head until my face was pointing in the right direction.

During a night excursion, we fished with mixed success for piranhas and held a squirming caiman, a cousin of the alligator that a crew member caught for our edification then returned to the water.

There were typically at least two excursions a day. And while we were aboard the skiffs most of the time, we jumped overboard for a swim on one day and went canoeing on another. Kayaks were also available for passengers who wanted to explore the river on their own.

A highlight was the chance to visit with locals, which the cruise line arranged by simply floating up to a rustic house on stilts and asking if the people who live there would like to meet us. Fortunately, they always did.

Aqua Expeditions offers three-, four- and seven-night departures on the Aria, with prices ranging from $4,050 to $9,450 per person.

Cabin crew secrets: Flight attendant reveals what really happens between crew while away

Adventures by Disney in adolescence

13 Things Space Tourists Should Know Before Traveling to Space, According to Astronauts