Home » Where to stay » The best things to do in Havana

Sun, slinky dancing, icy cocktails in bars fashioned from backyard wrecks and slumping colonial ruins, designer buys, avant-garde art, and a dose of communism draw visitors to the tropical nation island of Cuba. Havana’s seven year economic revolution has revived the spirit of this glamorous sea-facing city. From 26 February to 2 March Havana lights up with the annual Habanos Cuban cigar festival, celebrating its 20th anniversary in 2018; and from 22 to 24 March Havana World Music stages concerts across city venues.

Spanish grandeur in the old town

The Spanish colonial core of Old Havana is the city’s stellar attraction brimming with frescoed churches, cobbled plazas, civic mansions and nobles’ homes turned museums, galleries and restaurants. Admire the ecclesiastical interior beauty of Nuestra Señora de la Merced and the detailed exhibits at the Museum of the Revolution (9.30am-4pm) charting Fidel Castro’s rise to power amid the Tiffany interiors of this erstwhile Presidential Palace.

Behind the palace sits the Museum of Fine Arts (Tuesday to Saturday, 9am-5pm; Sunday, 10am-2pm). Go for the pop art of Raúl Martínez, the homo-eroticism of Servando Cabrera, the African symbolism of Manuel Mendive and Wifredo Lam, and the avant-garde works of Cuba’s thriving contemporary art community. 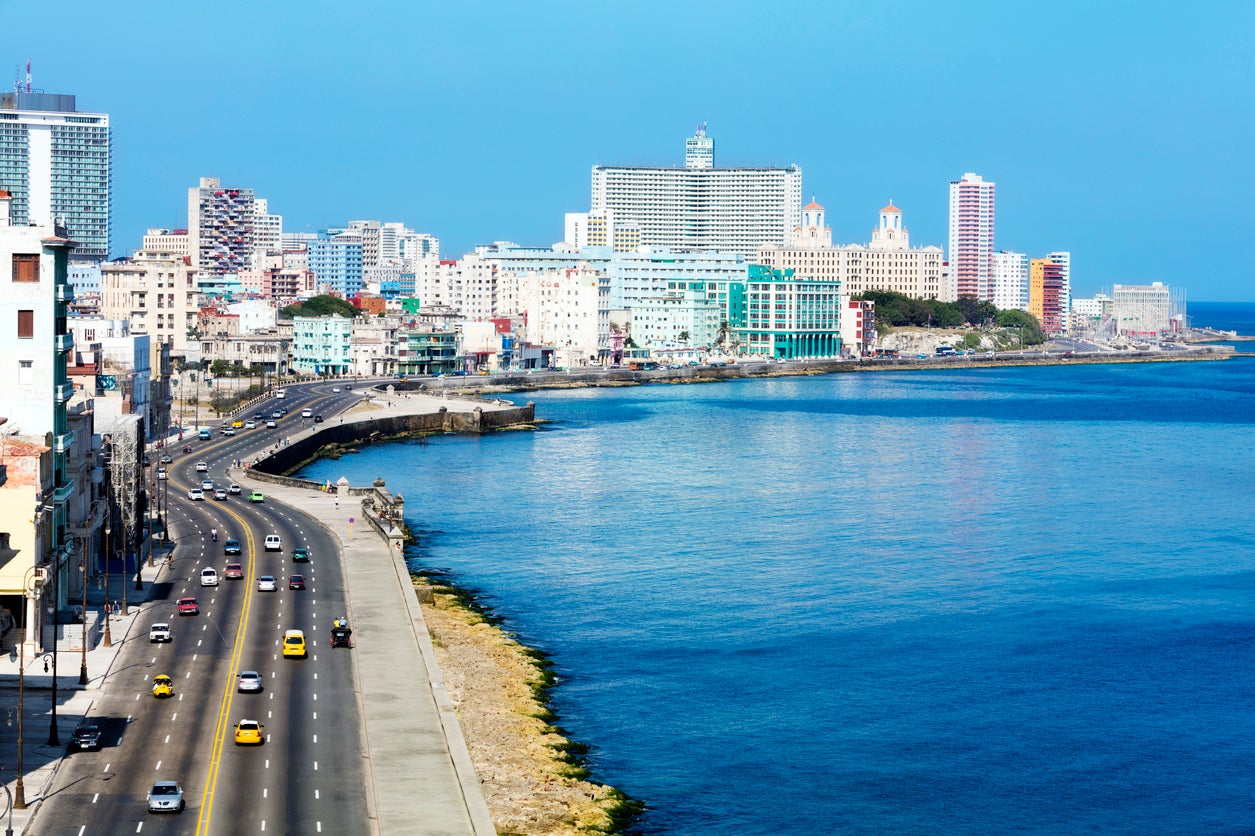 Amble Havana’s wind-whipped ocean boulevard, the Malecón, and admire the facades of its sun-bleached buildings as the sun slopes down behind fishermen, lovers, swimmers and trumpet players.

To fall in love with Havana walk, dance and dally along her dramatic, slouching streets. For a broader view of her maritime and sugar history – which saw the city bulge and bust through the ancient defence wall corralling the old city and spill west – explore by bike.

Cubanía pedals out every Wednesday morning with a bonus walking tour of the old town’s four plazas thrown in (£35pp), while Cubyke, using Cuba’s first electric bikes, lets cyclists with a mojito hangover lean back and cruise (£35pp). 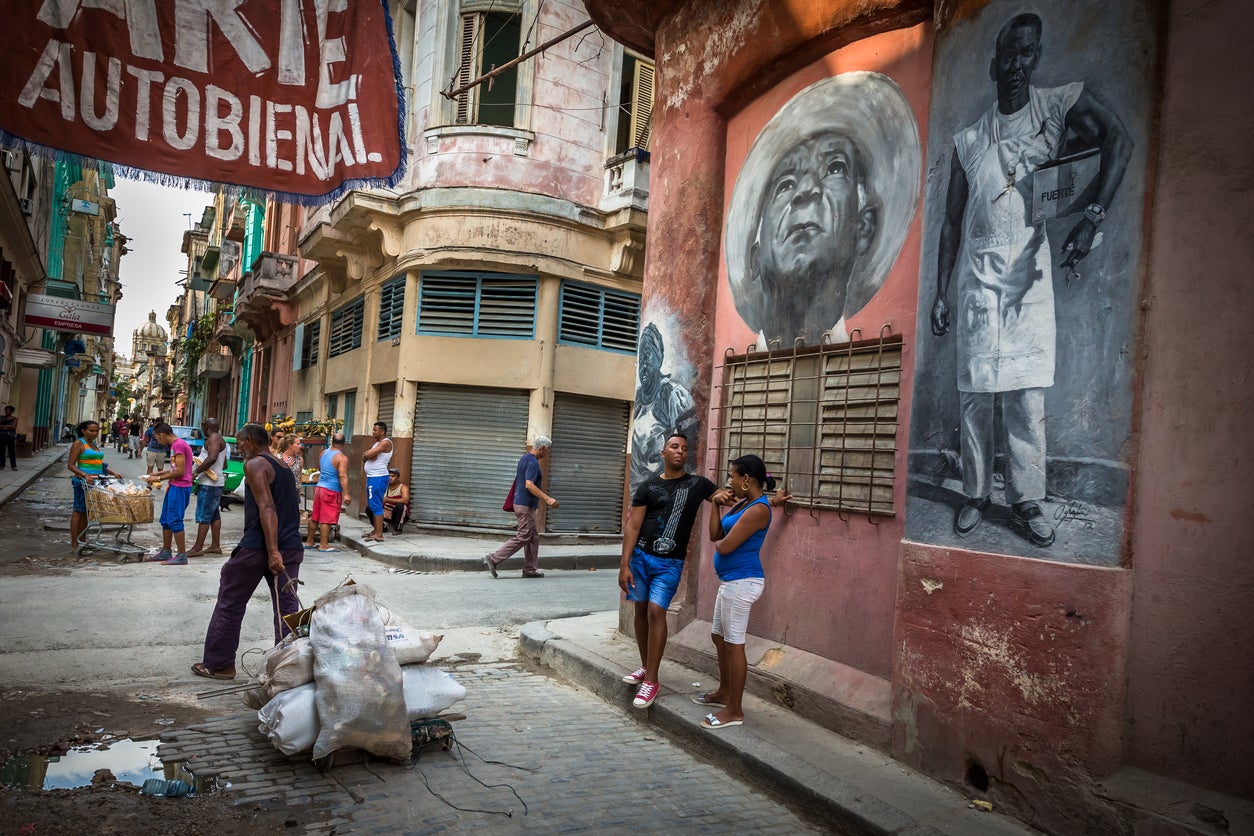 Ever since street artist JR and Cuban American artist José Parla honoured 25 Cuban senior citizens by crafting enormous impressions of their faces across the flaking shards of the city walls for Havana’s Biennial art fair in 2012, street art has been creeping across the city. See work by Fabián López, Yulier Rodríguez and Luis Casas, among others, and meet the artists on a street art tour. Tours cost US$140 (£99) including transport. 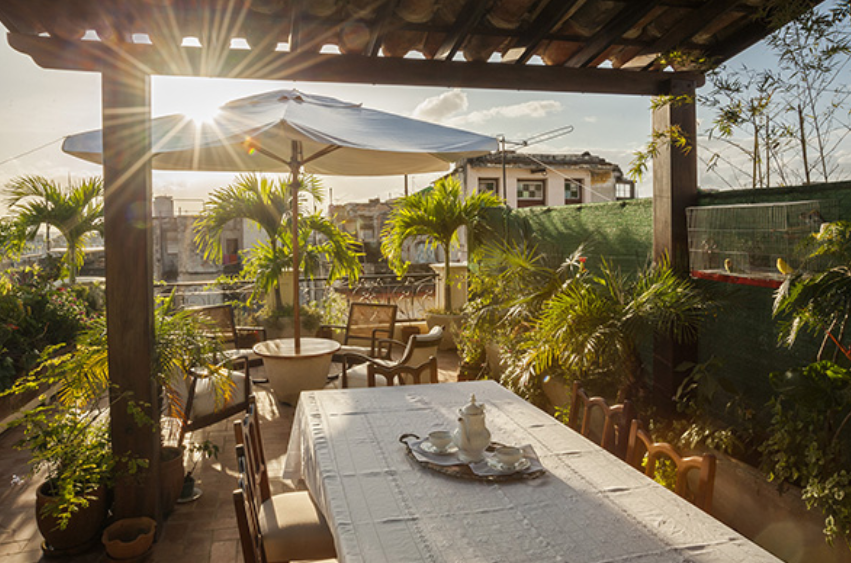 Handsomely furnished in Spanish colonial and antique French style with themed rooms and a parasol-shaded roof terrace for dining and drinking, La Maison is a steal. Three bedrooms from CUC$200 (£142), B&B.

For the coolest of Cuban Fifties glamour, check into one of Artedel’s three penthouse rooms, sip cocktails on the sun-soaked terrace and recline in the jacuzzi. Doubles from CUC$100 (£71), B&B. 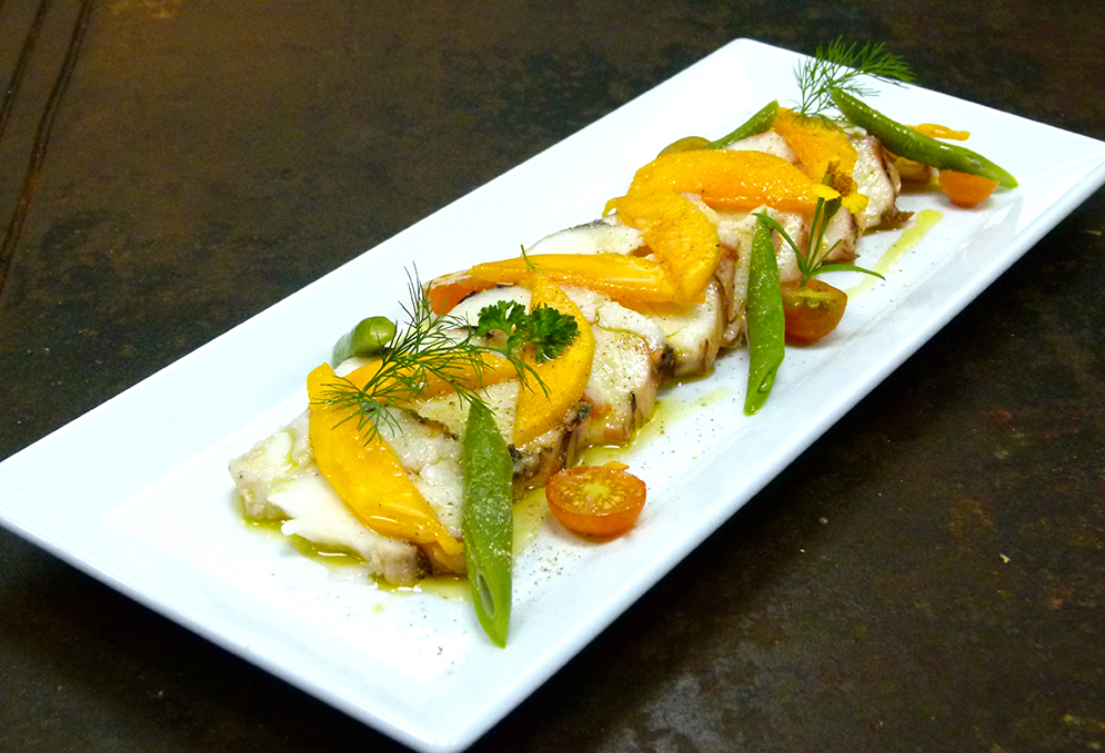 For Cuban tapas with a twist and moreish mocktails, swing by rustic Jibaro; 10am-12am.

Fruity daiquiris and outstanding panoramic views from the rooftop pool terrace of the Kempinski hotel are de rigueur. 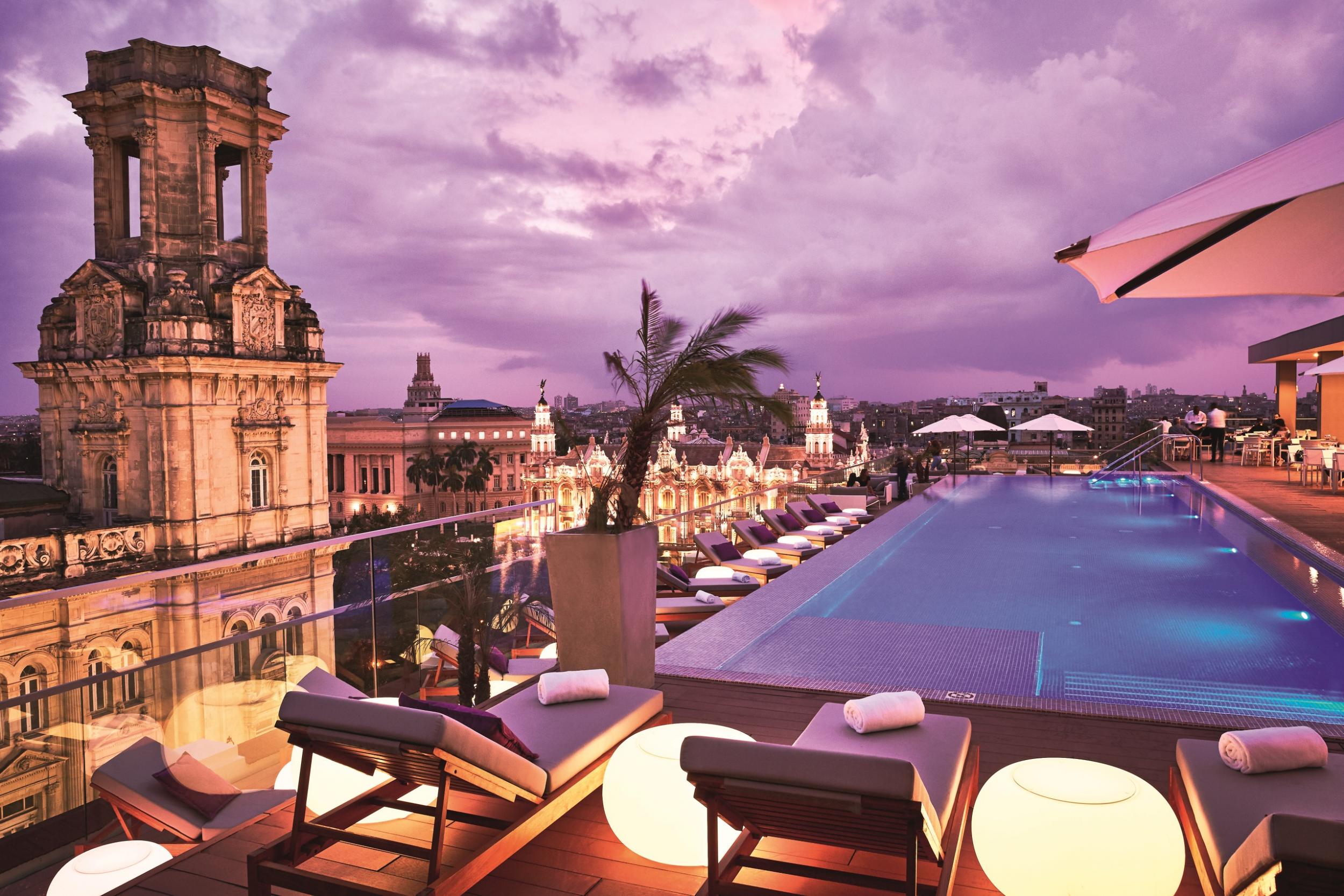 Must-have designer bags and tees with nuanced slogans can be picked up at Clandestina; Monday to Saturday, 10am-8pm, Sunday, 11am-6pm. 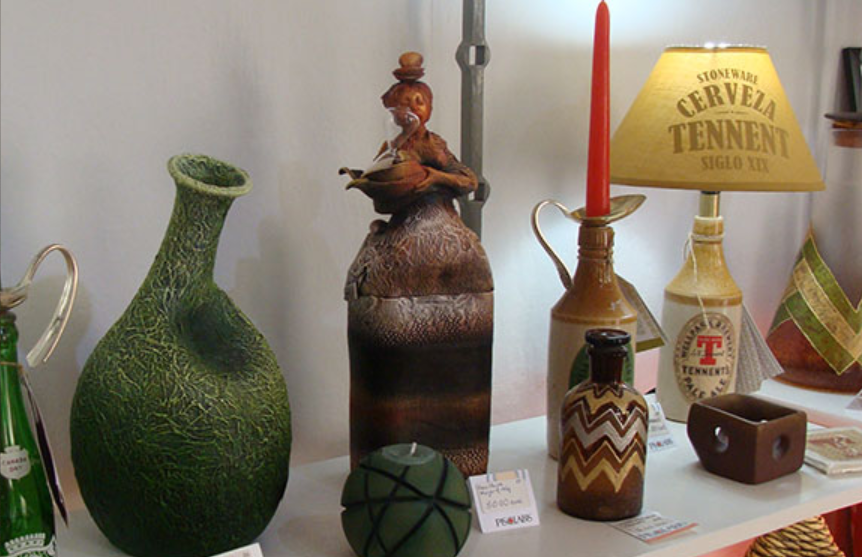 Beautiful, hand-crafted Cuban gifts sourced from around the country can be found at Alma; Monday to Saturday, 10am-4pm.

The art deco Edificio Bacardí was the headquarters of the eponymous rum empire in Cuba. It towers over Old Havana with its ziggurat crown, bat motif and naked nymphs embedded in enamelled terracotta panels.

What language do people speak?

Yes; 10 per cent in restaurants

What’s the flight time from the UK?

Between eight hours 40 minutes and 10 hours

Use the double decker HabanaBusTour for CUC$10 (£7)

The Malecón and fortresses from La Torre, the sky-scraping bar of the FOCSA building (Calle M, corner of 17, Vedado); 12-11.30pm

To travel like a local, hail a classic American car collective taxi (almendrón) for CUP$10-20 (28p-57p). For cigar factory visits, tickets must be bought in hotels

The Ultimate South Dakota Road Trip Itinerary: Where to Stop, What to Do, and More

Here Are All the Books You Should Read This Year, According to Barack Obama

Hate the middle seat on airplanes? A new design may change your mind