Segundo de la Cruz made a small cut with his penknife in the trunk of a rubber tree. Immediately, white sap began oozing out.

“This is what shoes and car tires are made from. One tree takes seven years to produce sap,” he said.

I glanced at what looked like large starched dish towels drying on a clothesline strung between the tall rubber trees.

“That’s what happens when the sap hardens in the collection pans. Now these sheets of rubber are drying in the sun. After that they’ll be rolled up and shipped off to factories to be made into the soles of your sneakers and lots of other products,” de la Cruz said.

I was in Samana province, a peninsula which juts out from the Dominican Republic’s northeastern shore creating Samana Bay, which opens into the Atlantic Ocean.

The province, one of 31 in the country, is a nature haven of palm-filled forests, isolated beaches, coconut and rubber plantations, tropical rainforests, rolling mountains and spectacular waterfalls.

Humpback whales, numbering 2,500 or more during the January to March season, return to this special corner of the country every year to mate, birth and bask amid the tropical scenery.

Discovered by Columbus on the last stop of his first voyage to the Americas in 1492, the explorer reportedly declared it to be “the fairest land on the face of the earth.”

Pirates hid in its lush foliage while European and Haitian troops competed for its deep-water, protected bay during the 16th century. 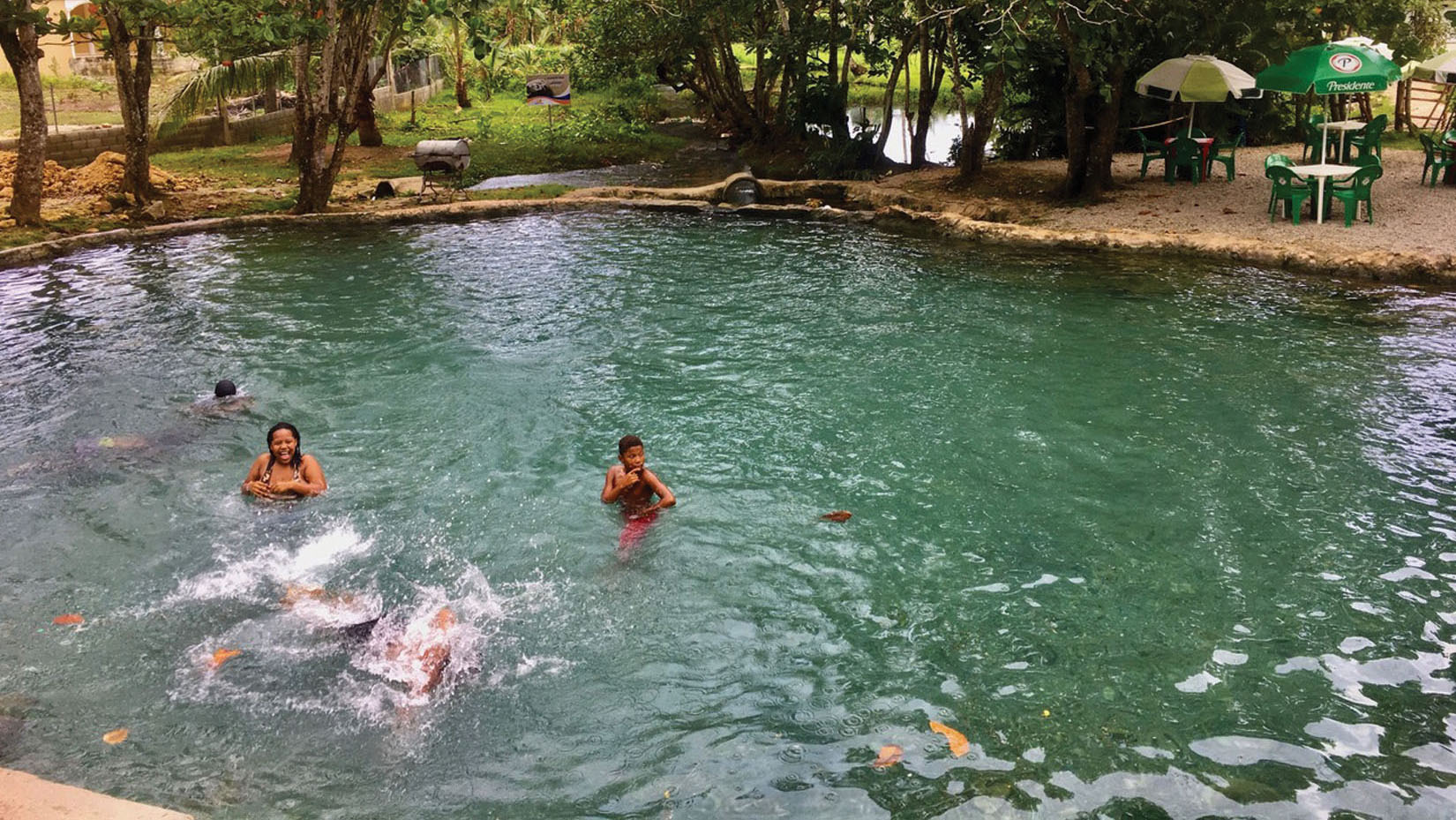 Today, the province of Samana is built on fishing, farming and tourism.

During my recent, brief visit, I ate freshly caught fish, tramped through a rubber tree forest, sipped coffee whose beans had been grown, harvested, dried, pressed, roasted and ground with mortar and pestle in the fertile earth behind a small lean-to. Best cuppa ever!

Sampling chocolate and cigars in the D.R.

At another stop on my half-day tour in an open-air safari bus (masks were required) operated by Samana Runners Adventures, based in Samana, the capital of the province, I tasted chocolate made from the cacao tree whose seeds, called cocoa beans, are used to make chocolate candies, chocolate liquor, cocoa solids and cocoa butter.

A final stop en route to the city of Samana and its markets and churches was Cigar House Las Ballenas in the village of Rancho Espanol.

The symbol of this small cigar factory is a whale (ballena), a frequent visitor during the peak mating seasons in the waters of Samana Bay.

Raol Vosters, manager and owner, is a Belgian by birth who came to the D.R. as an American Field Service exchange student, fell in love with the country and returned 12 years ago.

“It’s been a rough year for us, with Covid closing everything down,” Vosters said. “We used to have hundreds of cruise passengers and tourists coming through here each week. We’d get them from the U.S., Canada, Russia and Eastern Europe, but then last year we had to close, and we were shut down for 11 months.”

His usual staff of 17 is down to five now, but he’s hopeful that tourist traffic will pick up with the regulations easing and vaccinations increasing. Four million of the D.R.’s population of 10 million have been vaccinated, including many of the close to 140,000 who call Samana province home.

I watched Franklin, the cigar roller, as he took me through the process of cigar making, from leaf to finished product.

“Dominican tobacco is so good that Cubans buy much of their tobacco from us. Our cigars are a blend of Dominican and Cuban tobacco. Our cigars are milder and bigger, Cubans are shorter and stronger,” Vosters said.

Franklin handed me the finished product a few minutes later. Vosters lit it for me. I puffed, coughed, puffed. Later they wrapped my half-smoked cigar in a protective sleeve so I could bring it home. A perfect souvenir of this trip. 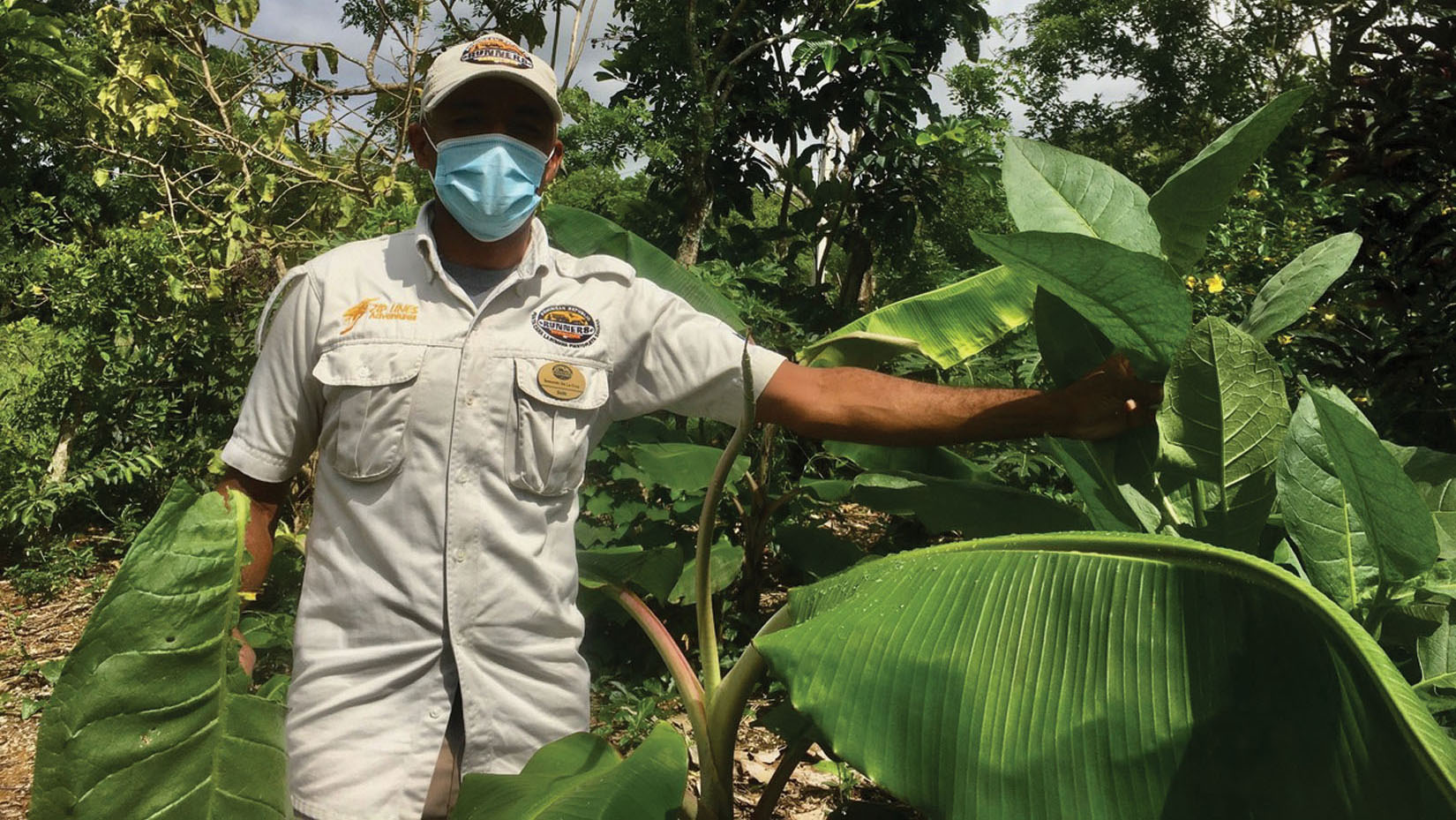 During the return trip to my hotel, the Bahia Principe Grand El Portillo, de la Cruz told me that he came from a family of six and was named Segundo because “I am the second son.”

The 48-year-old, who was born and lives in the city of Samana, has been a guide for 10 years.

“I had six months of training. I taught myself English. I also speak French. I love my job and my uniform,” he said, pointing to his khaki safari shorts and shirt.

We passed beautiful views of Samana Bay in the distance and close-up views of sad, run-down shacks that had been destroyed in hurricanes and never really rebuilt.

“When the people have money to rebuild, they use cinder blocks, which are strong and can handle the storms,” de la Cruz said.

I also saw mansions on the hillsides, horses and cows grazing in pastures, a river-fed swimming hole and hundreds of scooters darting in and out of traffic on the two-lane roadway.

Many had passengers, even children and chickens in tow. De la Cruz told me that he started driving a scooter when he was 10 years old.

“No one needs a license here. This is the cheapest way to get around. Gas is expensive. One liter costs one Dominican dollar or 100 pesos (equivalent to 57 cents in U.S. currency),” he said.

My tour was a brief glimpse of an area rich with nature and warm, friendly people. I still have much to explore, and I’ll be back.

British Airways: Cabin crew reveal why passengers get drunk QUICKER in the air

The Country of Georgia Is Reopening to Vaccinated Travelers