Home » Where to stay » The best luxury hotels in London 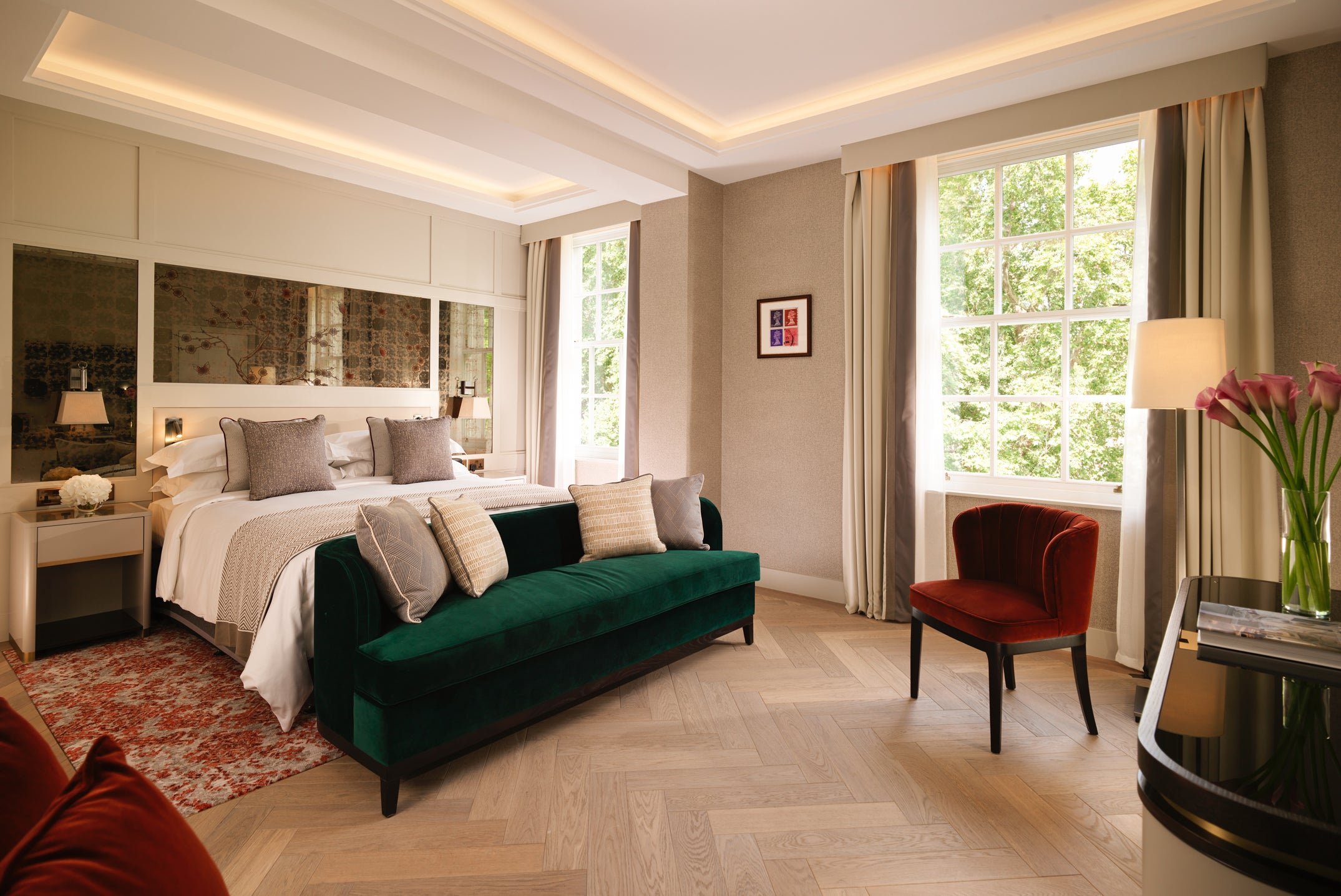 Part of the Hilton’s new upscale LXR brand, The Biltmore on Mayfair’s Grosvenor Square might have borrowed a strong American name, but inside the vibe is all British. Case in point: it was here, at 44 Grosvenor Square, that the Battle of Waterloo was declared a success in 1815. The lobby is a shimmer of gold, bronze and jolly floral soft furnishings, while Jason Atherton’s The Betterment sits just off to the right, serving modern British cuisine (try the signature fried onion flower, which tastes like a posh onion ring) and surprisingly reasonable cocktails. On the topic of cocktails… end your night swilling a whisky in the dim, wood-panelled Pine Bar. Guestrooms are decked in luxurious neutral, if a little bland, tones, but it’s the service that really stands out. Check-in staff will not only remember your name but wave you off with it the next day, but never in a way that feels overpowering or cloying.

Shangri-La at the Shard 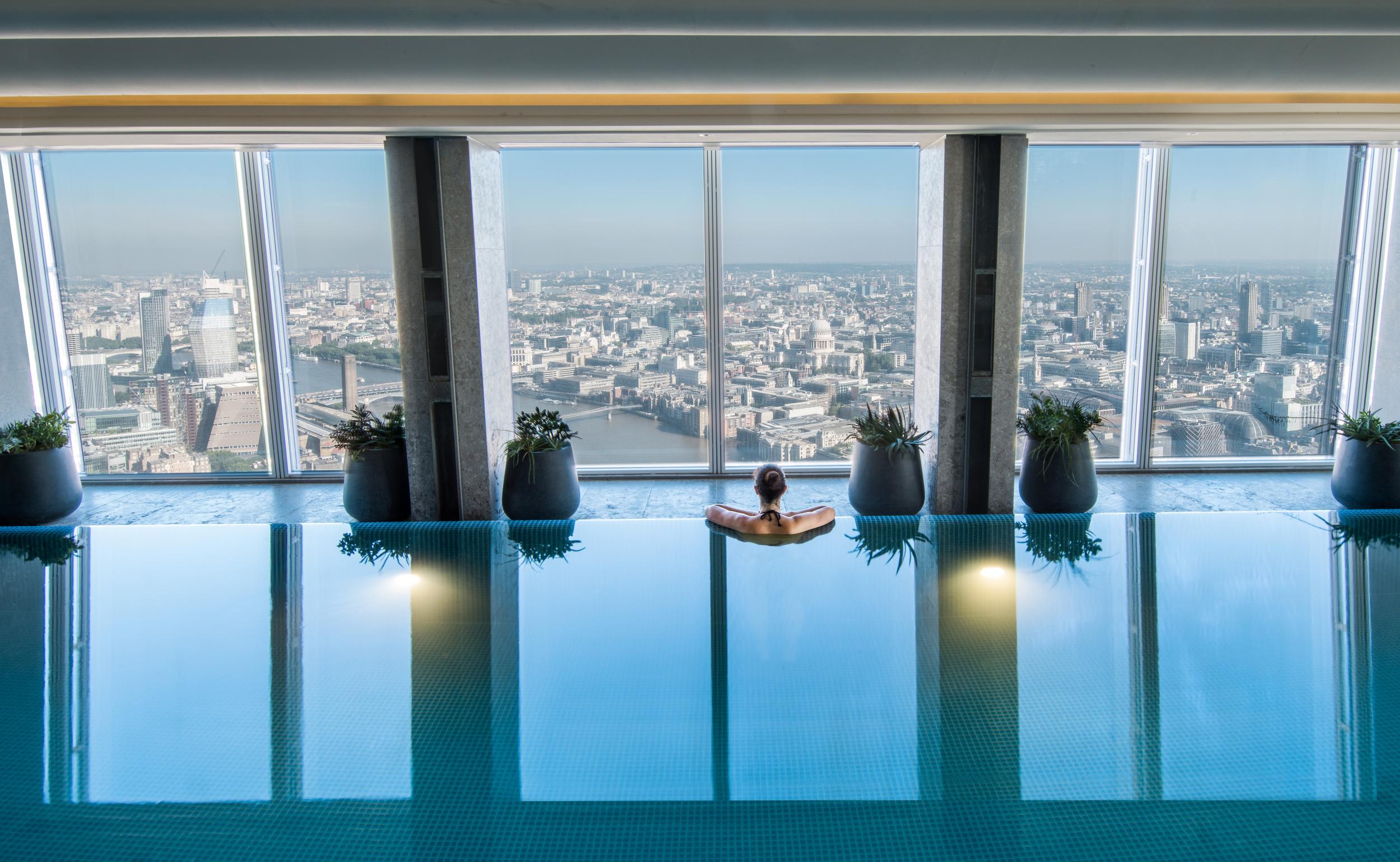 When Asian hospitality chain Shangri-La opened in the Shard, Western Europe’s tallest building, in 2014, it was literally head and shoulders above the rest of London – as well as being the first luxury hotel south of the river. The hotel, which occupies the floors from level 35 upwards, pairs its pared-back guestrooms – lots of business-friendly beige and black lacquer – with panoramic views across the entire city. Deep baths are positioned by the glass windows to maximise the views. If you’ve a whole day to spend, make time to go for a swim in the (indoor) infinity pool on level 52, and if you’re here at the weekend – the afternoon tea in TING lounge is delightful, and staff are only too happy to top you up with crustless sandwiches and scones. 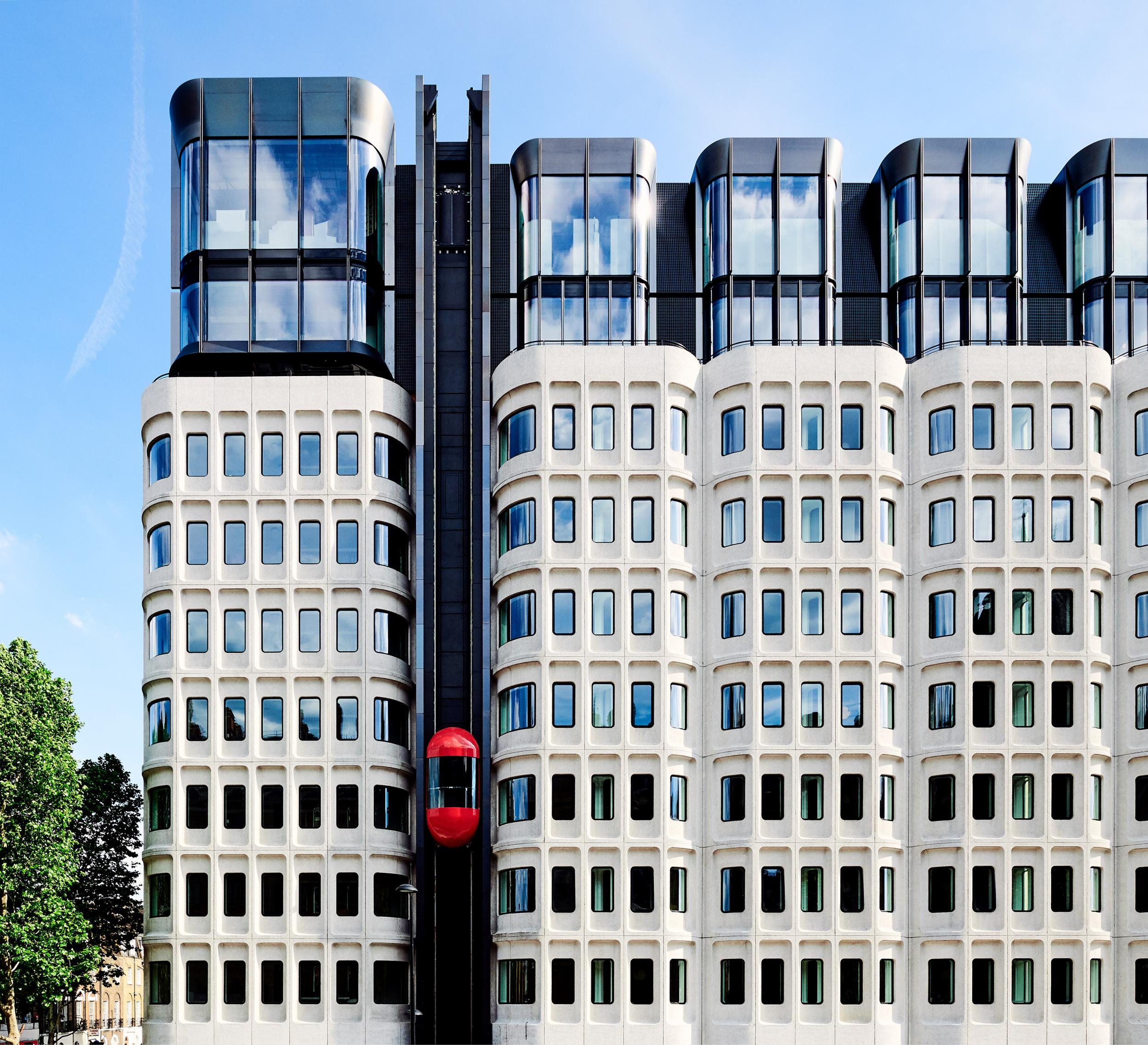 The formerly dowdy 70s Camden Council building on thundering Euston Road has been turned into London’s snazziest hotel by Standard Hotels CEO Amar Lalvani. The UK outpost of the West Village mainstay, so close to St Pancras station you can almost see the platforms, mixes seriously buzzed public areas – such as the pot plant-filled library, with a carefully curated selection running the gamut from “chaos” to “order”; restaurant Ila; and American diner-style bar Double Standard – with rooms straight out of the 1970s. Expect orange, red and pink acrylic furniture, bed covers from the same designer behind the Tube seats, and lots of funky rounded edges. If you’re too tired to party here, a couple of journeys in the flashy lifts will feel like enough. 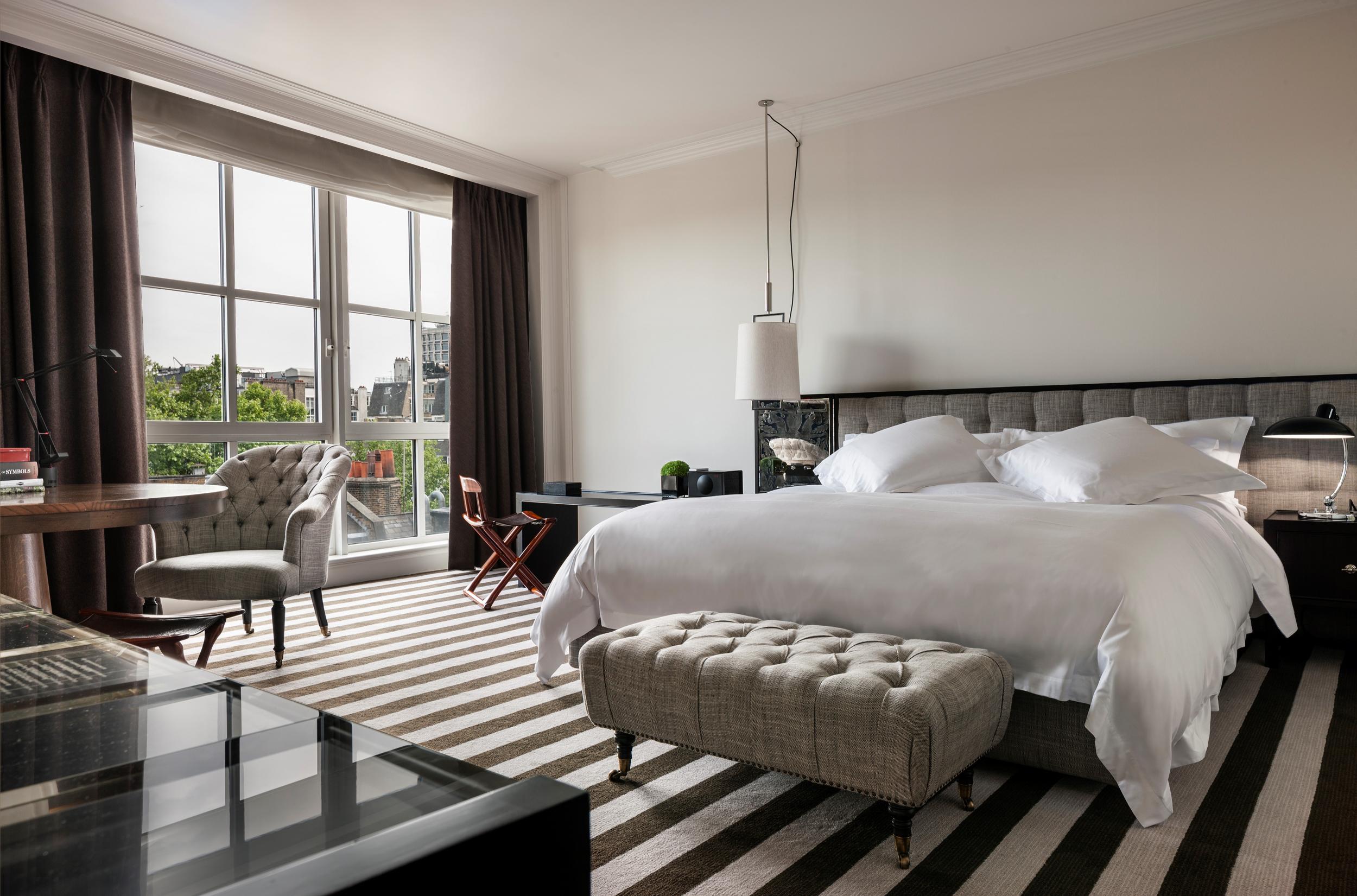 Accessed via a small courtyard from busy High Holborn, the Rosewood London masterfully blends Asian-inspired opulence in a nod to its Hong Kong roots – with licks of black lacquer, Chinoiserie and live birds tweeting from gilded cages in the stairwells – and contemporary luxury accents, such as the hammered copper sinks in the bathrooms and amped-up minibars. The excellent Holborn Dining Room adjoins the hotel (and feels nothing like your standard hotel restaurant) and here the pies are legendary: chef Callum Franklin has dedicated an entire menu to them, and the hotel even offers pie masterclasses. 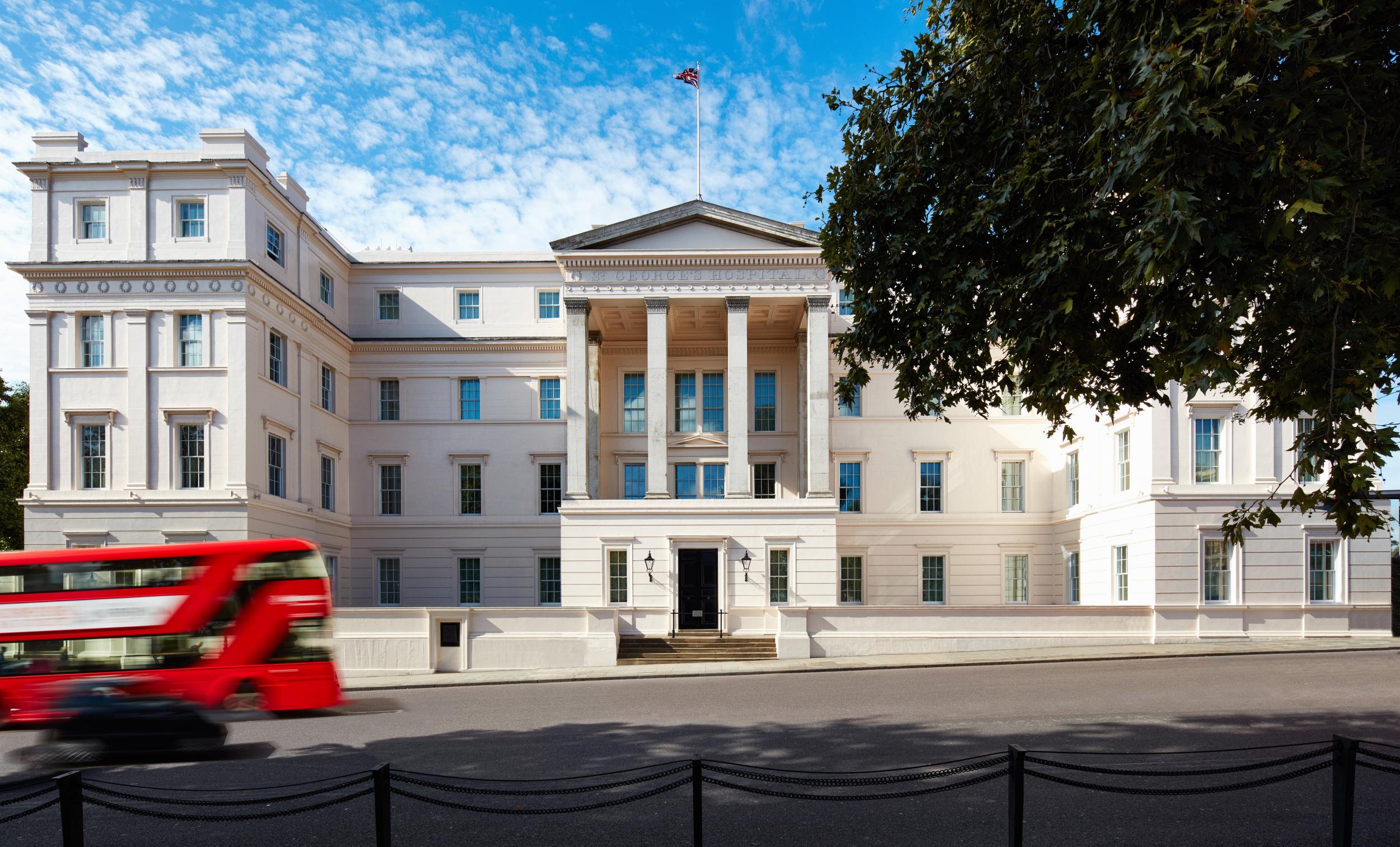 Smack dab opposite Hyde Park is the grand neoclassical Lanesborough, which, thanks to its stately good looks, has been used often as a stand-in for Buckingham Palace. Today it’s about as close as you can get to feeling like a royal without being born one. Interiors by designer Alberto Pinto recall 18th-century Regency style (which continues into the ultra-plush guestrooms) and fresh flowers are everywhere. The Michelin-starred Celeste restaurant, all duck-egg blue and upholstered mustard chairs, is worth a visit in its own right for its elegant afternoon tea. 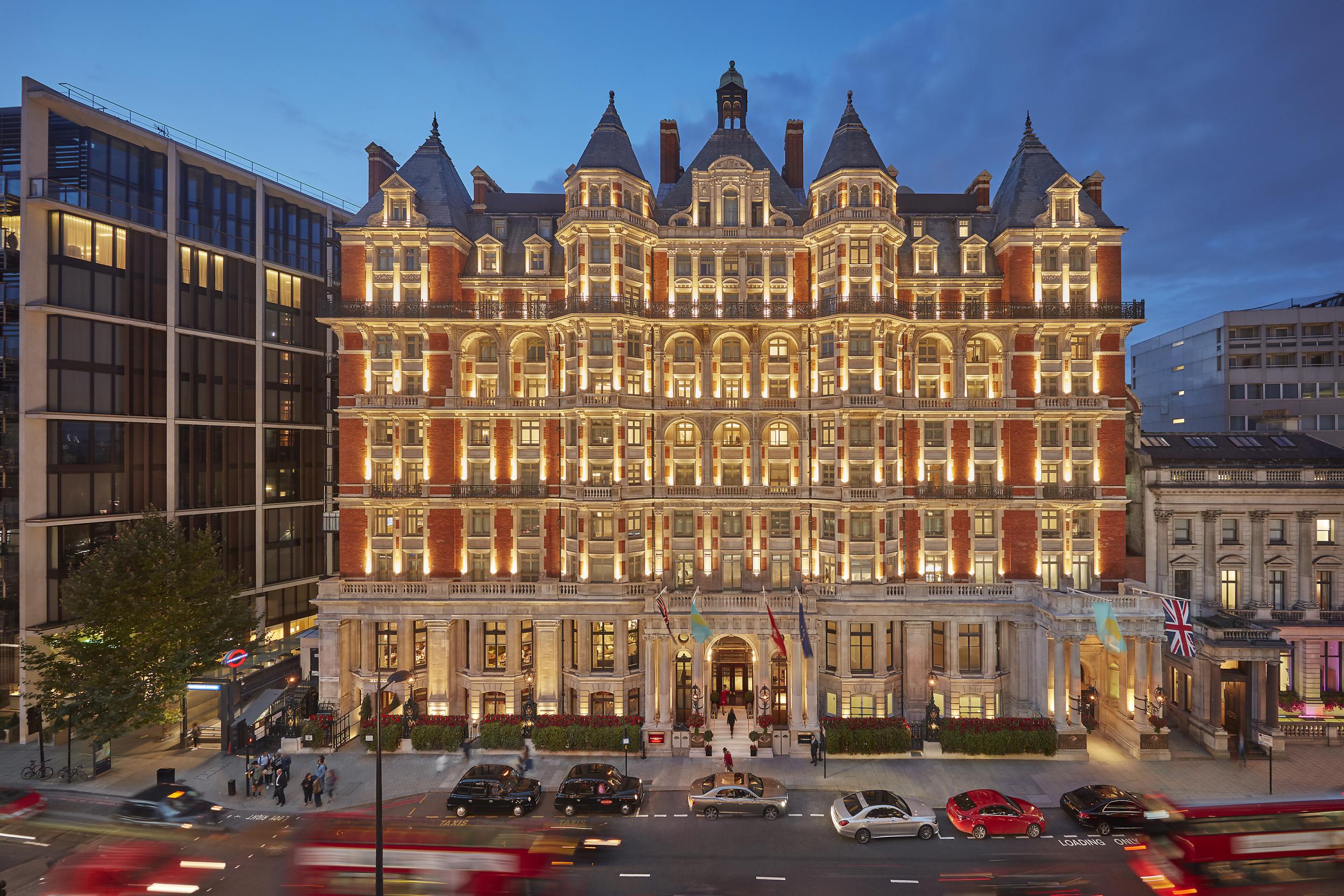 Splashily reopened in summer 2019 following a fire, London’s original grande dame is back and better than ever. Its cosseting basement spa has been enlarged since the renovation, offering luxurious treatments incorporating Traditional Chinese medicine and anti-ageing Nescens facials in its 13 treatment rooms, as well as a custom Pilates room. Hong Kong designer Joyce Wang has reimagined the guestrooms, giving them a subtle Art Deco touch. 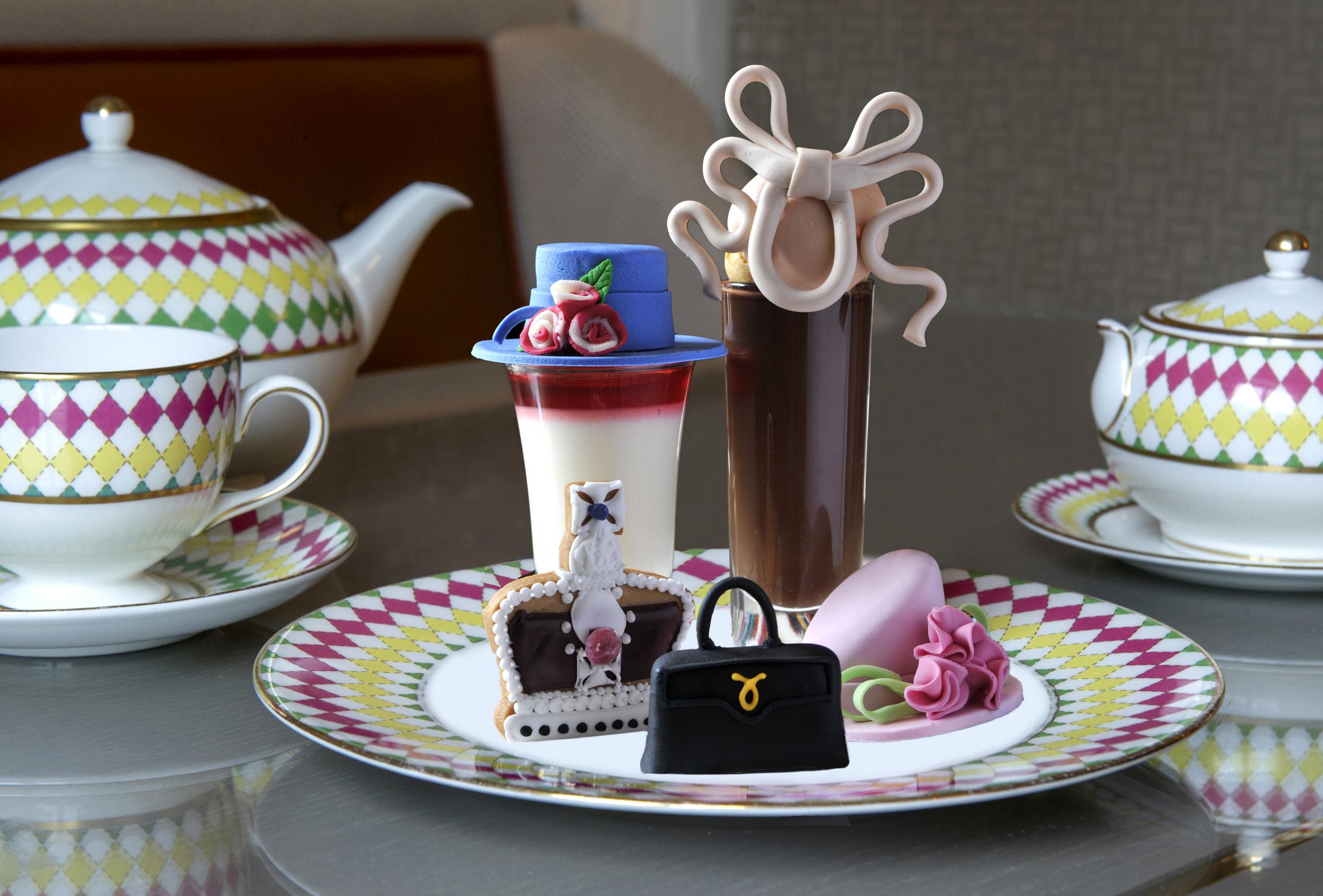 Sitting grandiose in Knightsbridge on the edge of Hyde Park, a stiletto’s click away from Harrods and Harvey Nichols, The Berkley oozes elegance and Art Deco grandeur. Perhaps it’s because numerous designers have collaborated with the hotel, including Paul Smith, who designed a range of bespoke crockery for the catwalk-inspired afternoon Pret-a-portea. The hotel has 190 rooms, 55 of which are suites, many with terraces overlooking Hyde Park and some bigger than most London flats. Marble bathrooms, wooden panelling and abstract art from the likes of Takahashi Murakami adorn the walls.

It’s old school London with a distinctly modern vibe, from suited and booted doormen and the award-winning David Collins designed Blue Bar that offers over 50 different whiskies, to the Instagrammer’s heaven, the snug at The Berkley Bar, designed by Bryan O’Sullivan with millennial pink walls, mural wallpaper and plush velvet sofa, perfect for an intimate group or romantic nightcap. The Berkley has two restaurants, the Michelin-starred Marcus, from head chef Marcus Wareing – a must for foodies – and The Collins Room, which offers a breakfast of champions. The spa is currently being refurbished and when complete will comprise a pool, sauna, steam room and gym, with serene white treatment area offering organic Bamford products. 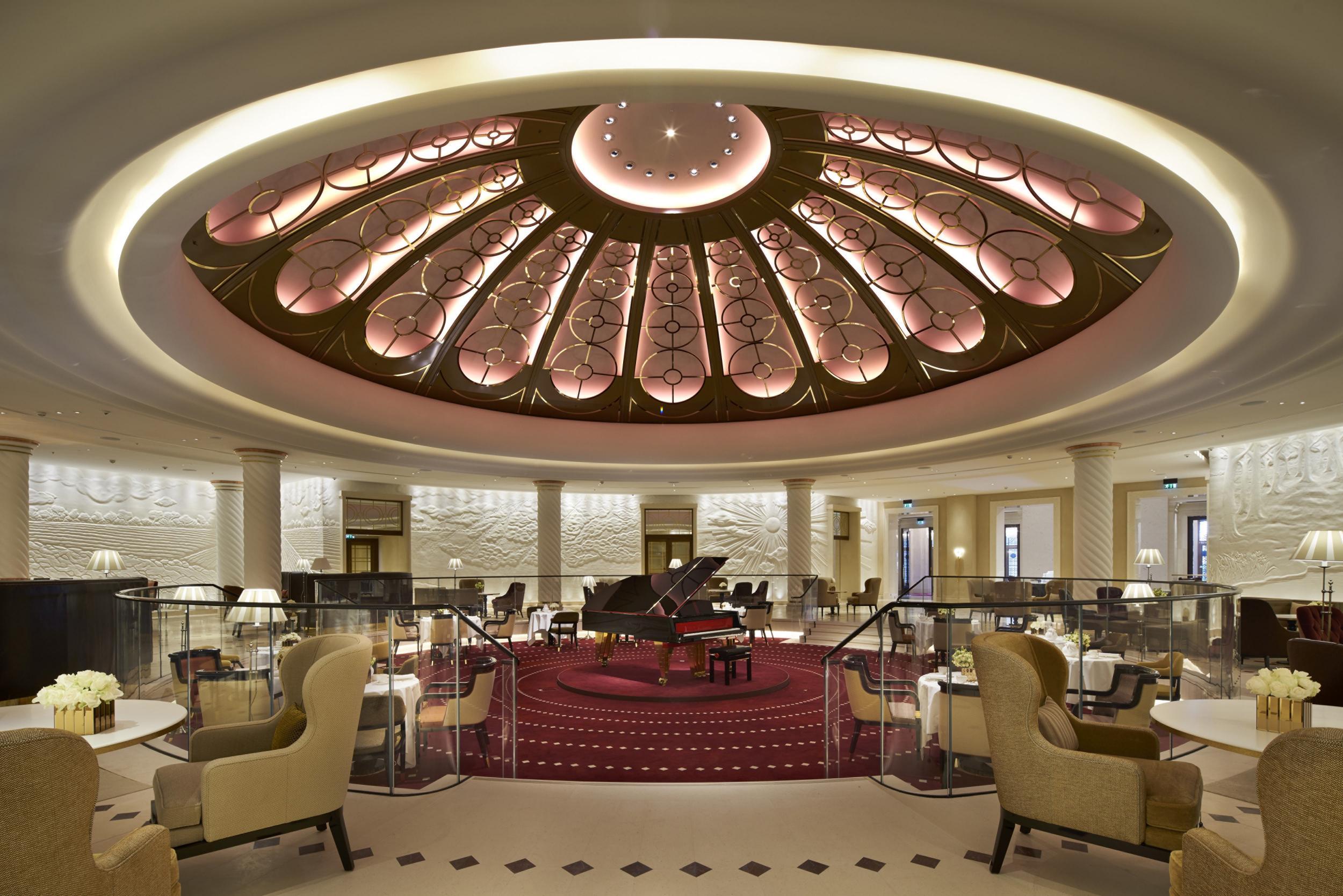 Tucked away behind Fenchurch Street station (and just moments from the touristy Tower of London) is Four Seasons’ second London outpost, 10 Trinity Square. Taking over the former London Port Authority building, this beaux-arts property welcomes guests past its Corinthian columns into its cathedral-like rotunda bar, under which a grand piano sits. Rooms, accessed via a long semi-circle around the building, are decked out in a lot of black and mirrors, while the bathrooms zero in on their crown jewel: giant gold mosaic baths. Plus, acclaimed French chef Anne-Marie La Pic has her two-Michelin-star outpost downstairs. 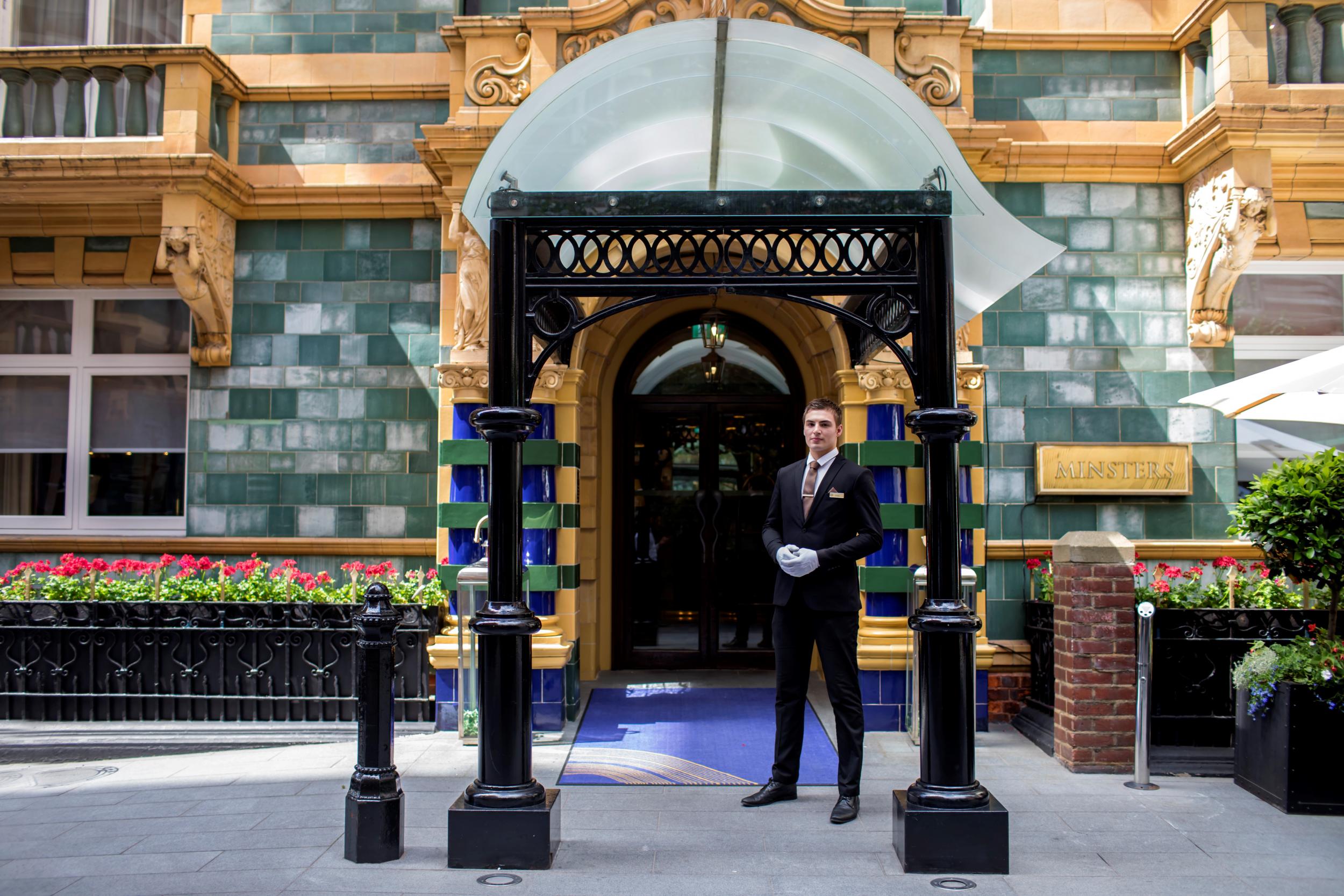 Indian hospitality group Taj is known for its individual heritage properties, so it’s no surprise its upscale London outpost is housed in three Victorian townhouses in groomed St James, not far from Buckingham Palace. As the name suggests, Taj 51 is an all-suite hotel, aimed at guests after longer stays – suites come with vast living rooms and fully kitted-out kitchens. Decor very much runs along classically elegant lines: think lots of rich golds, red and fat velvet cushions. The grand buildings, in quintessential red London brick, face off a quiet courtyard complete with cherub-decorated fountain. Don’t miss the basement Jiva spa, or a multi-course dinner at Michelin-starred South Indian restaurant Quilon, attached to the hotel: the masala prawns aren’t to be missed.

Read more on hotels in London

‘You won’t find this on Capri’: Italy’s Tremiti Islands

The best of both worlds ·

What Each Sanderson Sister’s Zodiac Sign Is, According To Their Role In ‘Hocus Pocus’

Incredible images of the world's most stunning sinkholes