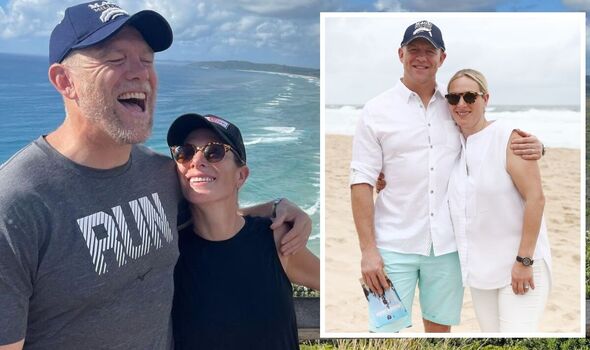 Zara Tindall, 41, and Mike Tindall, 44, have travelled to enjoy the sunshine in Bryon Bay, Australia, as opposed to the cold weather in the UK where the rest of the Royal Family are. Royal fans might not know that the royal couple has considered moving there permanently in the past.

Zara and Mike live with their three children, Mia, Lena and Lucas on Princess Anne’s Gatcombe Park estate in Gloucestershire.

But the Olympian has previously described Australia as her second home, after meeting there in 2003 during the Rugby World Cup. The couple has teased a potential future move to Australia.

“Probably not while I’m still competing. It would be a little bit hard commuting. But after that … yes, I think if an opportunity came up we’d definitely think about it,” Zara has said.

King Charles’ niece has been an ambassador of the Australian race carnival Magic Millions since 2012, which has seen her make several trips to the country in the past.

Zara and Mike have spoken about how their children have enjoyed the country, and praised the relaxed lifestyle.

“Early January is bleak over here so it’s nice to go and have a bit of sun. I love the lifestyle of Australia and the ability to get up early, go on the beach – especially for the kids, taking them in the ocean is brilliant,” Mike has said.

He added: “It’s not a rushed lifestyle. I think it’s a great place and we enjoy it so much.”

Zara continued: “Mia loves swimming. Of course, the climate allows you to be able to go swimming all day every day. When we first took her to Australia she was 11 months old; we kickstarted her love of water.”

Where are the couple staying as they travel to Australia?

In late November 2022, the couple spent a lot of time in Australia after Mike competed in I’m A Celebrity… Get Me Out of Here!.

The couple stayed in the luxurious JW Marriott Gold Coast Resort and Spa, which may have been where they are staying this time around as well, as it is less than an hour away from Byron Bay.

The five-star resort, situated in Australia’s Surfers Paradise, is the perfect place for Zara and Mike to unwind together.

The couple likely enjoyed breathtaking ocean views from the room’s floor-to-ceiling windows, along with an in-room bathtub, flat-screen TV and a plush king-size bed to relax in.

The website says: “Unwind at a luxury five-star resort in the town of Surfers Paradise.

“Our redesigned hotel rooms and suites offer an ideal setting to relax after a busy day, complete with high-speed Wi-Fi, plush bedding and pristine marble bathrooms.

“Wake up feeling refreshed and take advantage of our superb resort facilities, from peaceful saltwater lagoons and an outdoor freshwater pool with a slide to a modern fitness centre and Sport Court.

If royal fans wish to stay in the same hotel as Zara and Mike, the five-star hotel offers affordable rooms starting from just £256.

Be inspired to travel at Scenic Getaway travel showcase ·